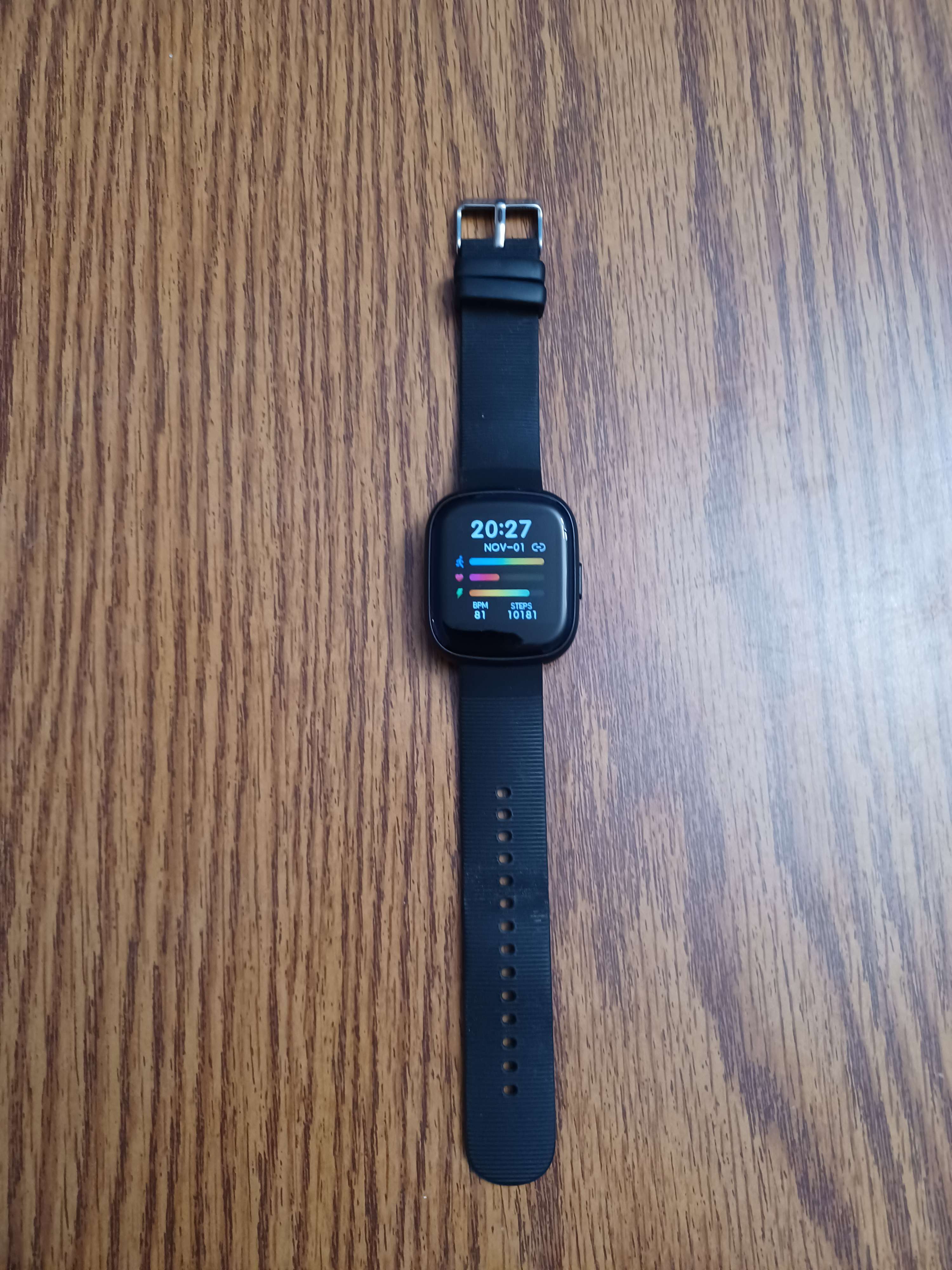 This product was sent to us through Amazon Vine, but our account is restricted from writing reviews. Due to this inconvenience, you can read the review here!

The TEFLOTY Smartwatch is a useful waterproof fitness wristband that can provide plenty of statistics about your daily life such as how many steps you get in a day, how much sleep you typically get, your heart rate, and more useful features. There are also a few things that may interest you such as displaying the weather, media controls, timers/stopwatch, and many more functions.

Upon receiving your watch, it is very easy to set up using the app (which there is a QR code for). In the app, you can view all fitness-related statistics as well as customizing the watch and its abilities. For example, you can tell the app how often you want the watch to remind you to drink water, or when it tells you to move around a little bit/touch some grass. You can also set alarms, as the band can vibrate to hopefully wake you up. Another cool feature is that you can use it to remotely take photos for some interesting selfies.

Something neat that it can do is count the specific hours and minutes of sleep that you got, as well as when you were in deep sleep/light sleep. It also shows you a bar graph showing how much you were able to get over the past seven days, which is fairly useful if you want to adjust when you go to bed or something similar. Another thing it does is track your steps and vibrates once you reach your goal. It can show a graph as well, and can be used to see how active you are over the course of 24 hours. There are a few health-related functions as well such as blood pressure, heart rate, and blood saturation/SPO2, which also have their own data charts.

As mentioned previously, it is waterproof, and the rating for it is IP68. This means that you can use it for casual swimming, and water has a hard time getting inside it. It also has decent battery life, lasting around two days on a full charge.

If I could change anything about this watch, I’d get a more convenient charging method, such as a cord or dock, as the current flimsy magnet charger falls off more often than not. Something else I’d fix is the fact that it’s incapable of displaying all phone notifications, since it currently has a very small list of alerts you can get on the band. Also, something to note is that some of the things (mainly pictures) on the Amazon page are inaccurate.

If you’re looking for a watch to get without spending too much money, get this one. It costs $27.99, and has plenty of features. You’re almost guaranteed to appreciate a lot of the things it can do, and it’ll last you a while as well. I’ve used almost all of the features that it has, and love all of them. Chances are, you will too!

Thank you Quarto Group for sending us this book!

This is a book that teaches Fortnite players how to become a pro at the game. It teaches players the art of speed building, how to build a good base, the best strategies, and much more.

This book tells the readers about emotes. It shows what they look like, and when to use them. It also talks about a lot of epic things that happened in the history of Fortnite: Battle Royale. It will explain you many ways that you can bend the rules. It tells you that you can play the game however you want to play the game, so that you can have fun as well as everyone else who is playing with you.

The only problem with this book is that it is outdated. Fortnite is one of those games that changes or has something added or removed every few weeks, so that makes this book incorrect in some of the things that it says in it. When this book was made, it was season 7. As of this review, season 10 just came out. It is a little more up to date than the first book (the 100% Unofficial Fortnite Essential Guide), which was made in season 5. Other than that, the book is great.

I think that any Fortnite players that want to become a pro (probably all of them) should read this book. If they just want to become a master builder, then this book would help them. If they just want to know how to properly raid an enemy base, they are covered. This book covers stuff from battle tactics to just organizing your inventory. This book is very useful, but I still think that you should read the first book before reading this one, that the first one covers the basics, while this one contains more advanced things.

Thank you The Quarto Group for sending us this book to review!

This book is a guide to Fortnite players who had just started playing the game. It provides lots of tips and tricks to help you survive a good amount of time in a match. If you don't already know, Fortnite is a Battle Royale game, so the tips that this book gives are very nice to know when you are being attacked by another player.

This book is very useful, but it is also very outdated. When this book was made, it was in season 5 of the game. As of this review, it is in season 10. That does matter a lot, because the creators of Fortnite have removed and added some weapons and features since then.

This book helps you decide what gaming platform you want to play Fortnite on, learn the controls, helps you decide if you want to play Battle Royale or Save the World mode, and so much more. It tells you what to do when you encounter another player, stumble into a build battle, and how to use your weapons and conserve your ammo. It tells you what building materials to use, their advantages and disadvantages, and also what every item and weapon can do. It provides a description of a weapon, how easy or hard it is to find, and where to find them. It also tells you how to build a base and how to invade other bases as well. It also describes each location and tells the reader how many players usually land at that location.

I think that this book is very useful and whenever I play Fortnite: Battle Royale I use these techniques and I use the hints and tips that it gives me. There is also another book like this one called the 100% Unofficial Fortnite Pro Guide. If you read this one and use it, then you should also read the Pro Guide.

Finnian and the Seven Mountains

Thank you Philip Kosloski for sending us a digital copy to review!

Finnian and the Seven Mountains is a 25-page long Christian comic about a man named Finnian who wants to find a lost sword because his village was raided by vikings. He wants to get revenge, so he asks a man who was fishing for a boat. He says that if Finnian helps him fish, he would show him where a boat is. Finnian helps him fish, and ironically, they caught so many fish in their nets that they could not carry them all. Finnian gets in a boat, and starts paddling. Weeks later, he arrives at an island that is supposed to have the sword. He gets hit by a giant wave but someone on the island named Brendan grabs his hand. Brendan takes him to an old man named Abba, who is a very wise man who the people on that island seem to speak to for help. Somehow, Abba knew that Finnian would come. He showed him around the island, and Finnian stayed there for a while, but when he had to leave, he slipped and almost fell into the ocean! He grabbed on to the cliff and climbed up. But when he did so, he loosened a rock and it fell down. Under that rock was a container. Inside that container was a map. It was a map that led to the sword he was looking for! But little did he know that vikings had another version of that map, but they only had half, but they were still going to the same place as Finnian...

I think that this book has a good art style which fits the book very well. It has a similar art style to a Marvel comic, except it doesen't have any action bubbles because there isn't any violence for those to fit in to.

Unofficial Minecraft Life Hacks Lab for Kids: How to Stay Sharp, Have Fun, Avoid Bullies, and Be the Creative Ruler of Your Universe

Thank you Quarry Books for sending us a review copy!

Minecraft Life Hacks Lab for Kids is a book that teaches kids some things about communication skills, building self-confidence, and much more. It has some stuff to do and build in Minecraft, and some stuff to do in real life.

There are two chapters: Life Hacks: Acquiring Skills and Life Hacks: Applying Skills to Projects. Chapter one teaches children skills (hence the name) like emotional empathy, problem solving, and much more. Chapter two teaches children ways to use those skills. For example, you would make an animated movie in real life, as well as a short film in Minecraft.

This book has twenty-four labs (twelve in each chapter), which are things that you can do. In every chapter, there are 6 in game labs, and 6 labs to do in real life. Most of the things that you have to do in real life have something to do with what you do in-game. As an example, you had to draw a map of a house, and then building the house you drew in Minecraft. It made you build your character as well, and it had you fill it with positive messages to gain self-confidence. A lot of the things you do in Minecraft relate to the real world. It makes you build a farm, but the farm has to be the same style of farm that you can find in the real world. It also had you build a democracy, which was interesting. My favorite thing to do was building a roller coaster that described me. I put lots of work into it, and it turned out very well.

Overall, this book was fun to work on and I loved building some of the things, and then testing to see if they work, and then fixing them if they don't work correctly. The only thing it had wrong was the estimated time that it takes to build something. The book said it would take one to two hours to do something, but I was able to do it in ten to fifteen minutes. Other than that, the book is great and I think that lots of people who enjoy Minecraft should read it and use it as well.