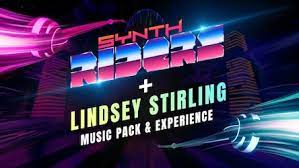 I’ve been a longtime fan of Synth Riders and Lindsey Stirling.  I was quite excited to hear about their recent collaboration.  This bundle features a variety of songs spanning her musical career.

You can buy each of the five songs individually for $1.99 or you can save 20% by purchasing the bundle for $7.95.  The five tracks include:

You can give them a listen on Spotify here

The Underground track is an experience level which has visual effects and feels like an interactive music video.  Alternatively, you can play the song like any other and see your score and combo streak.  Earlier music packs had free tracks for everyone to enjoy, but like the recent Caravan Palace Music Pack, this one does not have any freebies.

Nothing has changed gameplay wise.  You have to touch similarly-colored orbs with your hands. Your left hand is blue while the right one is pink. Green orbs can be tapped with either hand and orange ones require both hands to get credit.  There are also many pink walls that you have to dodge.  Pink orbs placed near these obstacles may be hard to see at times.

You should be able to play the entire tracklist in under thirty minutes. There are online leaderboards to compare your score against. I won’t be dethroning anyone soon as my feeble attempts are half of the top place holders.  You can change the difficulty for added replay value.  Lastly, you can join multiplayer and compete against five players at a time! I only owned two of the albums featured so I was already familiar with Shatter Me and Shadows.  I have since added the Brave Enough CD to my music library.  It’s hard to pick a favorite song in this pack as they’re all good and have different musical inspirations.

Compared to other experience levels from previous music packs, I found the Underground one to be merely “Okay”.  It’s fun, but didn’t blow me away like some of the others I have played.  I did enjoy the parts where it felt like you are flying.

Morally, there’s little to worry about.  Lindsey Stirling is a devout Mormon and her songs can be enjoyed by people of all ages.

If you’re like me and enjoy both Synth Riders and Lindsey Stirling’s electro violin music, this DLC pack is a no-brainer.  I look forward to playing it some more and future DLC packs from Kluge Interactive.