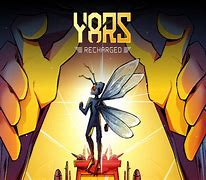 I owned an Atari 2600 when I was a young child. My family had a really good collection of classics, though I'm not sure if we had Yars' Revenge. Games back in those days were often defined by their limitations, and the Atari had tons of them. It had a 4-bit microprocessor, a 160x192 pixel resolution, 128 bytes of RAM (yes bytes, aka B, not KB/MB/GB), with 4KB game cartridges (some later carts supported up to 64KB via bank switching). I point all of this out because game design was basically all limitations at that time, and developers would code completely in hand-written assembly language, which directly translates to machine code and is difficult for all but the best programmers to write. (Modern development is done in high-level languages with lots of layers of abstraction to save coding time, not hardware computational cycles.) Yars' Revenge was originally meant to be a port of an Arcade title that the 2600 did not have enough power to recreate, so the designer Howard Warshaw came up with a different but related game design and launched Yars' Revenge. It ended up becoming the best-selling game on the Atari 2600.

In the original, your goal is to destroy an enemy called a Qotile, which is usually surrounded by a protective shield that you can slowly shoot down. He can also turn into a Swirl and launch at you at very high speeds, returning to his spot afterwards. Once you have cleared a path to the Qotile, your insect-like Yar can move up to the Qotile and you aim your Zorlon Cannon at him by positioning your body and then firing. If your shot from the other side of the screen hits him, he dies and you continue on to the next level. It can also hit you though, so care is important.

While I haven't played an Atari 2600 game in a while, after figuring out how it works (this is more than half of the battle in these ancient games with no instruction booklet handy), I could quickly see why it became so popular - it's fun. It was a neat game design that few shoot 'em ups that I can recall continue to use in the modern day. It understandably became a well-regarded classic, and I'm really glad that they updated it for the modern day in Yars: Recharged.

Like other entries in Atari's new Recharged line, it's not a simple 'same game with new paint' kind of deal. They took the idea of having a Zorlon Cannon fighting Qotiles and made some interesting changes while also keeping the Arcade-style spirit of playing level after level and chasing high scores. It definitely retains the spirit while making something new - and it's a lot of fun.

When you start the game the first time, you are dropped into an immediate tutorial. This tutorial shows you the basics of movement via the left stick, and shooting/aiming/eating on the right stick. There are no buttons required to play, though menus do use them. Keyboard and mouse controls also work really well, and appropriate button prompts display on screen depending on which control scheme you use. Having played using both, the controller feels more natural, especially for movement, but mouse aiming is pretty great while shooting, as it enables focus fire without missing on some targets. Using a controller is more natural for eating-style gameplay.

Yars: Recharged plays in large part like a twin-stick shooter, where you move and aim at the same time independently. You eat rather than shoot when you get within touching distance of anything; opponents and pieces of the destructible hexagonal-shaped walls can all be eaten or shot at. Everything goes down faster via eating, so it can really help to get in close whenever possible. Once a bit of hive-shaped wall is destroyed, it leaves behind an orange energy ball. Once you collect enough of these balls, you fill up the meter on the far left of the screen, and can launch the Zorlon cannon, which can kill most Qotiles in two hits (some require more). The meter slowly drains, but as long as you keep collecting orange energy balls, it can stick around indefinitely until you are ready to use it. Near where the cannon is there is also a shield that prevents all enemy shots from reaching you, except for the Spirals - those go right through the shield.

Like most shooter-style games, of course enemies shoot back, and use bullets or Spirals to wipe you out. If one of the bullets hits you, they take away one of your three hits. Once you take three hits, you're dead, and you see the Game Over screen. Thankfully, your hit counter resets at the beginning of every level, so if you get past a tough one you can take on the next at full strength again. Getting hit by a Spiral is instant death and Game Over though, so please be careful to dodge those!

There are thirty levels in the Arcade mode, and thirty (mostly different) levels in the Mission mode. Arcade mode always starts you off at level one, while on Mission mode, you choose which challenge to tackle directly, assuming you've unlocked it. Whenever you complete a mission for the first time, a new one unlocks, giving you always something new (and difficult!) to try out, even if a level seems impossible for now. The challenge ramps up really quickly in both modes, but it's especially fast in Mission - it's balanced around you being able to keep retrying over and over until you figure it out, while in Arcade mode you have lots of levels to get through if you want to take on a late-game challenge again. 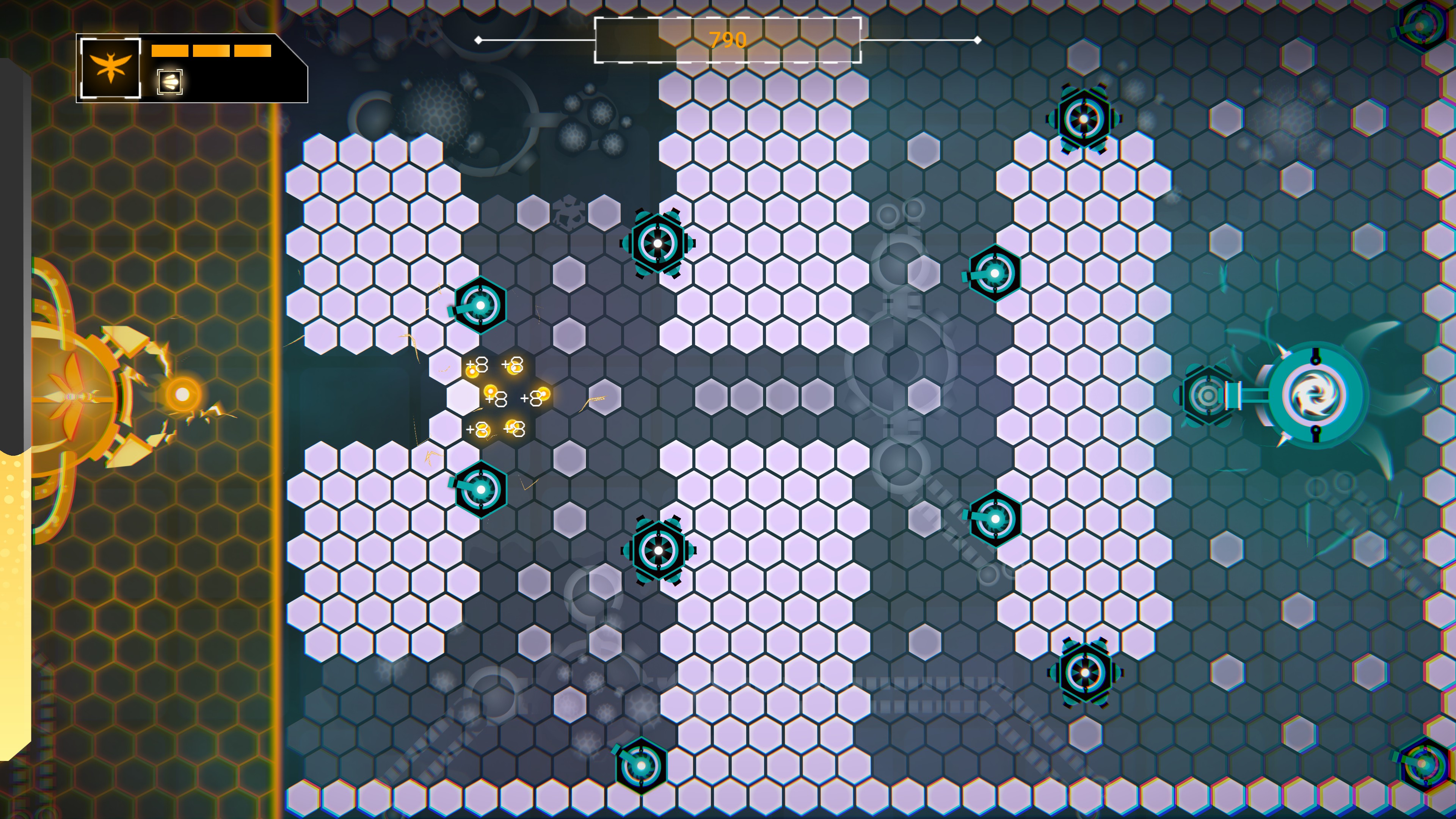 The form of challenges the game throws at you varies, though it comes down to a few things. First, some levels have lots of enemies on the screen, which means lots of bullets. Dodging them all can be quite tough, especially since eating walls does slow you down, so it helps to pre-plan an escape route for when Spirals are thrown your way. Bullets can also come from the edges of the screen, and some of the upgraded Qotiles you see later can shoot them on occasion also. Some levels also have 'terrain' of sorts that encourages you to be in the center of a ton of enemy fire, which makes dodging all of those shots even more difficult.

On top of the bullet dodging, some levels provide sections of walls which are a thick white. These areas can be munched or shot down, but it takes an extremely long time to do so. It literally takes a minute or more to eat through a white block, and some levels have quite a few, so removing them this way is not usually very practical. In most cases, there is an alternate way to blow them up, like destroying nearby or linked cannons. For example, on one level, you need to destroy all of the cannons top and bottom first, before your Zorlon cannon has any chance to reach the Qotile. On another, you have to go through a very difficult maze and destroy a well-protected cannon before a path to shoot the Qotile opened up. On one level, I decided to just eat through the white section (which took forever) because it made getting to the boss easier, despite other options being available because it was ultimately easier, though quite time consuming.

All in all, level design is generally quite good, though a few are certainly more frustrating than others. There are many very large difficulty spikes in several places, and they did try my patience on several occasions. I still kept coming back to the game though - it's just really fun to play. It's even better with two players, as you can cover each other, try two approaches at once, or have one player keep shooting/eating while the other aims or uses the Zorlon cannon. It's a blast and I recommend playing with someone else if you can.

Graphically, it uses an art style quite similar to the other Recharged games, with smooth, simple shapes, and nice large explosions that shake the screen. The music is also great, and fits well. The game also ran great on everything we tried it on, including the Steam Deck, though the game stretches to fill the display on non-16:9 aspect ratio displays, and the Steam Deck uses 16:10, so it makes everything tall. The fix for this (at least on Steam Deck) is to enable Windowed mode, which properly draws black borders around the game to preserve the aspect ratio. This works on Steam Deck because of how the SteamOS windowing system works; this may be less preferred on other systems.

While playing with my son on my Windows desktop in multiplayer mode, we ran into audio bugs where everything got quiet most of the time because both of us were constantly shooting (as one tends to do). We expected loud bullet chaos, and instead got an odd silence. I hope they fix this!

Morally there isn't much to worry about. Like other shooting games, you can shoot or be shot at. Your fly-like creature might be organic, or maybe not. Same with your enemies; some are clearly robotic turrets, but not sure about the Qotiles. There is no blood or gore, only explosions.

Yars: Recharged isn't a perfect Arcade-style game, but it's a ton of fun. Even if I found myself incredibly frustrated playing some of these levels, I still enjoyed my time with it, and I've played short sessions of it all around the house because it's just so much fun, even in relatively short Arcade mode stints. And two-player mode is great. While I haven't gotten to review all of the Recharged games released so far, this one is definitely my favorite of the ones I've played so far. If you like simple shoot 'em up action with a twist, I'm sure you'll love Yars: Recharged like I do!