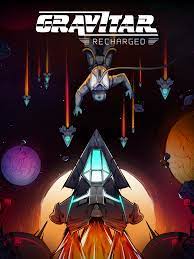 While I owned Gravitar before playing this via the Atari Vault, I can't say I played it much before being offered this game to review, so it kind of came out of left field for me.  I've played quite a few other Atari classics, and I played most of the originals that were remade for the Recharged series, but this one surprised me because it, along with Black Widow, I hadn't heard of before!

Once I started playing Gravitar (the original), I came to quickly understand why a remake was so sought after.  It was a really ambitious game for 1982, which combined Asteroid's flight physics with Lunar Lander's gravity effects, and it had different levels, all on an arcade game.  It's extremely difficult!  Even the Atari 2600 version, which is perhaps a tiny bit easier, is still quite brutal on difficulty.  It has several planets for you to invade by shooting down various turrets and enemy spacecraft.  You also have to manage fuel, and there are several fuel pickups throughout the game.  The final level has you shooting a reactor, and you have to do it quickly.  Every level I tried is obnoxiously difficult.

Gravitar: Recharged, like the other Recharged titles, is a re-imagining of the classic game with some new features added in.  While I can't compare it to the entire Recharged line as I haven't played them all, Gravitar: Recharged seems a bit more ambitious of a conversion than Breakout: Recharged was.  At its core, it's still a 2D arcade-style title, with jazzed-up modern graphics and soundtrack, though made with some more modern sensibilities.  While the original was heavy on levels where your only goal was to shoot all enemies, this time there are varied goals throughout.  The order of the levels seem to be somewhat randomly generated, though the general layouts of each type are somewhat similar.

You start in what appears to be a solar system, with a large sun surrounded by planets or various other object orbiting it.  Each planet or other solar object is its own level, though there are also asteroids to avoid or shoot; if you die by them one of your precious three lives are still lost.  Same with crashing into the sun.  Gravity is a constant companion the entire time you play; if you see a mass, it's going to exert some kind of force on your ship, and the larger it is the more it pulls you towards it.  This Recharged version has rebalanced gravity and physics, and while the effect is certainly there (and strong at times), it is much more reasonably balanced compared to its inspiration.  So while on a basic level movement is easier than before, it's still quite a challenging game.

Strong Points: Engaging gameplay that gets more fun the more you play it; lots of challenge; tough as nails missions; great music; graphics look really good for the art style; local multiplayer is fun; works great on Steam Deck with native Linux support
Weak Points: Can be frustrating until you get the hang of it; in local multiplayer you share lives, so you may want a similarly-skilled partner; no Steam Cloud support
Moral Warnings: Can die via lasers, blasters, explosions or crashing (no gore whatsoever)

The main game mode is Arcade, where you try to clear a solar system by completing each task that takes the form of a solar object (planet, satellite, etc.) in it.  There are both one and two player modes; you share a life pool, so it's best to choose a partner of similar skill level.  You can also choose to make your game much harder in exchange for a higher score, if you reduce your life count to one, disable power-ups, or perhaps most importantly, disable your shield.  The shield can take a single hit for you without dying, and if you wait long enough it recharges.  This is probably the most difficult of the three bonuses to go without.

There are also Missions, which is a set of twenty-four challenges that will test your skill as you try to complete them in the predetermined levels.  They can be extremely frustrating, but if you go through them, your skill level in Arcade mode will almost certainly be much higher before you realize it.  The effect was quite significant for me, as I 'accidentally' became much more skilled quite quickly in Arcade mode after completing just a few Missions.  Of course the cost was my own sanity - these levels are hard!

When you enter a level, you are given a unique task to complete it.  The most common task is to activate a certain number of beacons, which you do by floating near one of them while avoiding crashing or getting hit by a stray bullet.  It's usually in your best interest to shoot down enemy spaceships, turrets, or whatever else you might run into, even if that's not your goal for this level.  You have infinite shots, though only three bullets may be on the screen at once, so try not to miss as you'll have to wait for them to leave the screen before shooting again.  Once you activate all of the beacons, you can fly out of the level and watch the place you just left explode.

You can actually leave any planet/ship/etc. that you enter at any time by flying out if you choose to do so (in Arcade mode; Missions feature a level border that you cannot leave).  You can also grab fuel and leave for another planet if you want, but flying at any time costs more fuel, and it's a limited resource; also pickups don't respawn, so plan carefully.  Few things are more frustrating than dying because you ran out of fuel!  What I find happens is that your ship becomes uncontrollable, and you just float to your inevitable death.  Since the solar system has several solar objects and the sun that you fly around is quite large, each solar object can be a significant distance apart.  So proper fuel management is really important. 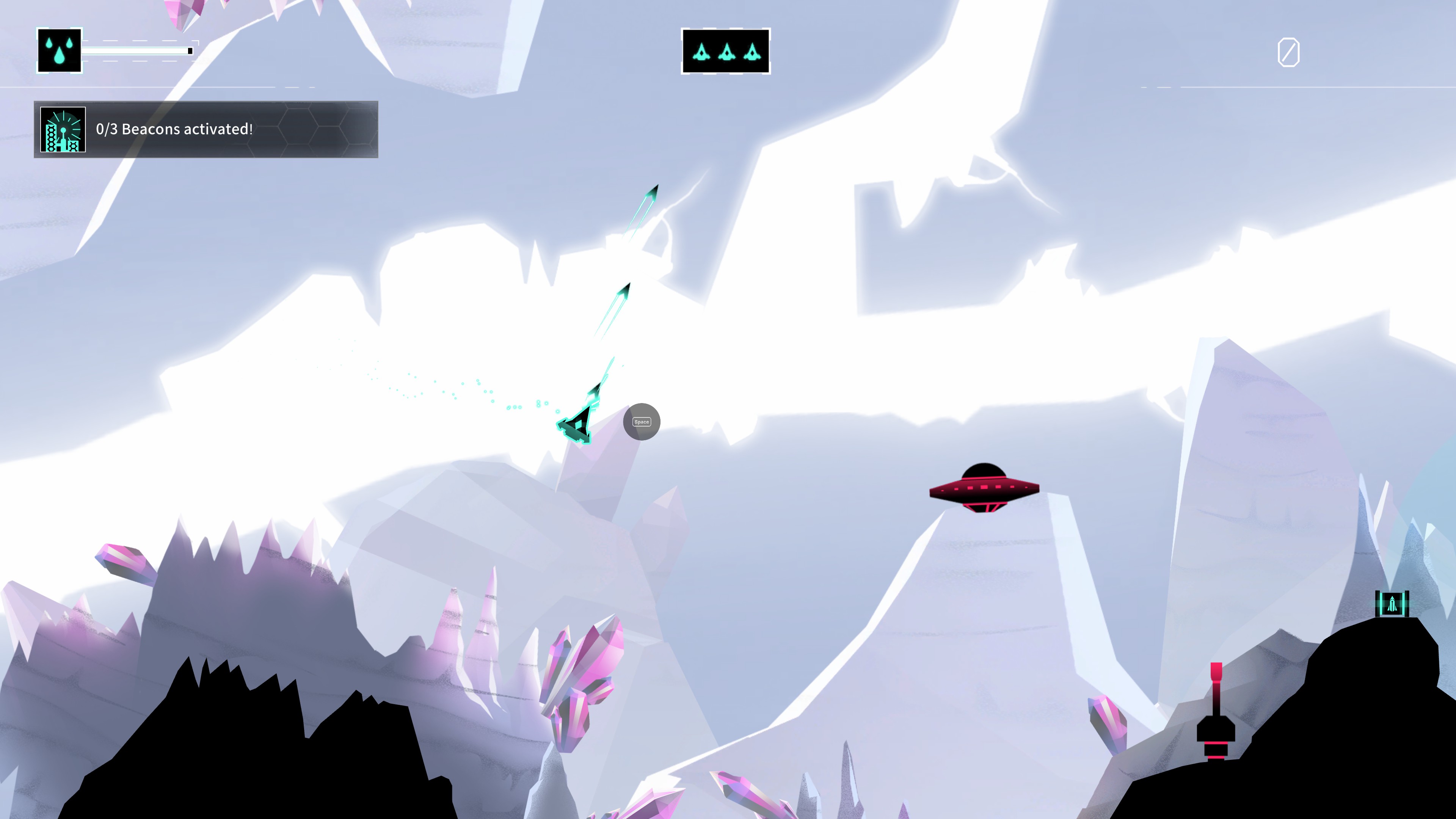 While within a level, there are several types of pickups available, though not all are necessarily helpful.  You collect pickups by pressing the dedicated pickup button, which defaults to the left trigger on your controller.  This activates a tractor field around your ship.  (This is used to grab more fuel, also.)  It's important to grab them all if you want a high score though, because you get points for picking them up.  Non-fuel pickups can't be taken with you outside of the planet, so sadly we can't exploit that potential loophole.  The most important pickup is of course fuel; this one is easy to accidentally shoot and explode, which can be situationally helpful, or very much not.  Other pickup types includes the spread shot, which trades range for several at once (normal shots go a bit past the edge of the screen), while the relatively rare railgun gives you a powerful aimable blast.  The EMP is about as rare as the railgun, and is something I've only gotten a few times.  It disables enemies in its radius, which centers around your ship.  Overload is perhaps my favorite pickup, as it makes you temporarily invincible, though you can only kill enemies via impact, as your turret is disabled for that time.  All powerups are temporary, and have a timer in the lower-left corner of the screen.

Each time you play, the solar system itself is randomly generated, with semi-random order mission types in orbit around the sun.  The levels themselves appear to have several varieties for each mission type, but you do eventually recognize the levels for what they are after you enter them, as those planets have unique icons.  Outside of the beacon levels, there are some where your goal is to kill all enemies, and two very similar kinds: Steal the Intelligence, and the much harder 'Destroy the Reactor'.  Both require you to get to the center of a labyrinth-like structure, but 'Steal the Intelligence' allows you to leave the level on your own terms; in 'Destroy the Reactor', you shoot the core, and have a limited time to leave without dying.  On the plus side, if you do manage to shoot the core but die escaping, the level still explodes as you do if you still have a life left.

The graphics are quite nice, and of a different graphical style than the wireframe graphics used on Breakout: Recharged.  Your 2D ship and enemies are simple, and yet look great - more detail is not always better.  The lines and sprites (if you want to call them that) all look sharp, with clean lines and no discernible jagged edges anywhere unless playing at unusually low resolutions.  The music is also great, and fits really well with the mysterious space theme.  It also runs wonderfully on Steam Deck, though it must be said that the game stretches when the display is not at a 16:9 resolution, rather than leaving black bars or showing more (or less) of the game area.

Morally, this game is squeaky clean, unless you think about the potential impact on one's enemies when blowing up their planets or nuclear reactors.  Of course you shoot enemies and they shoot you; you can die from bullets, and impacts with almost anything, though your shield can thankfully absorb a hit if you are quick on your feet to recover.