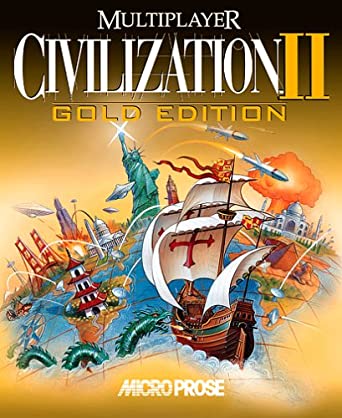 Note: This review is limited to covering the stock campaign content of the Multiplayer Gold release, this does not address the Test of Time release, or non-historical expansion pack content.  The technical score will reflect getting this game to work on modern computers as of the time of this writing, with the proper patches and fixes to make it work on modern PCs. For detailed advice, guides, tools, patches, and other useful things needed for making this game run well, I advise visiting https://www.civfanatics.com/

I also recommend FreeCiv for a free and open source alternative should this prove too hard to acquire legally.

Some games will always stand the test of time. Sid Meier's Civilization II is one of those games, considered one of the best in the series decades after its first release. While somewhat dated in terms of mechanics and features, many things that would be integral to later titles were established in this one, and it's still an excellent game even now.

The Civilization series is a pioneer of the 4X genre (an acronym for eXplore, eXpand, eXploit, and eXterminate), a subgenre of the simulation genre typically involving the simulation of cultures and leadership of the same. Accordingly, the series motif is that the player assumes the role of a real-life civilization like the Greeks, Japanese, Sioux, Mayans, and so on, and they attempt to bring their fictional version of this civilization to greatness over a series of turn-based moves until they have reached the end of the game, where they will be scored on various criteria to determine how well they did.

The gameplay is typical for a turn-based simulation game. The player must, throughout the game, determine the strategy and tactics of their civilization's growth and development. In the process, they must deal with rivals either by guile or force, overcome setbacks like pollution, civil unrest, and economic crises, and in the end, bring their civilization to glory either by getting the highest score, eliminating all rivals, or being the first one to launch a colony ship into deep space. 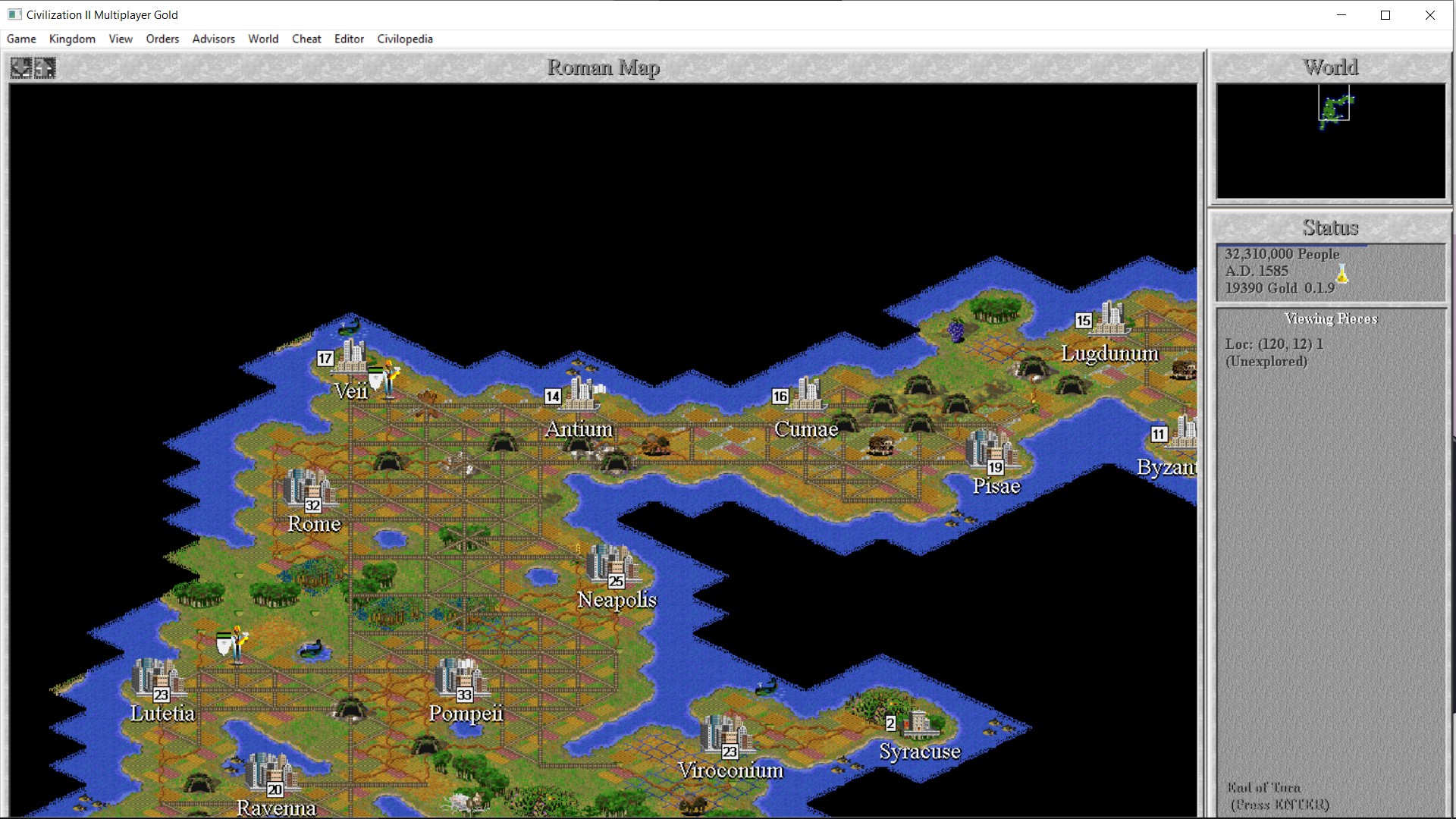 This title would establish many features that would become standard in later titles. Instead of the top-down square tile map of Civilization 1, this game uses an isometric, hexagonal map, which later games would adopt as their standard mode of play as well. Unlike the first game, which featured still images, this game includes animations and movies for unlocking World Wonders and other notable advances, which later games would expand on. This was also the first game to support a considerable degree of modification, with many of the game files in a human-readable format to support custom scenario design, complete with a map editor as well. Later games would further flesh this out as well.

Graphically, the game uses 2D graphics, albeit with some animation to depict movement. There is an advisor panel with animated videos done by real actors who advise on various things like military and commercial advances (not to mention many are hilarious, especially the Elvis Presley impersonator who serves as the cultural advisor). There is also some animation during negotiation screens to liven up what would otherwise be a series of text boxes and menus. If the player wishes, many of the animations and videos can be disabled, or will simply not work if not present, as the game can be installed without the eye-candy.

The music is generally limited to the drum music heard in the intro and public domain tracks like classical music, though these all fit the historical theme like a glove.  Sounds tend to be plentiful and varied. Infantry units and the Barracks building get a marching sound, firearms get a gunshot, the Stock Exchange gets a bell sound, and other appropriate effects are used for other units and building creations.

The keyboard and mouse control the game. Given the game supports diagonal movement, the mouse is ideal for this, and there is a toggle for showing a directional arrow to indicate where you move, which I recommend be turned on. Otherwise, the game consists of a LOT of menus, which are easy to sift through but tedious since most of the game will involve clicking through a ton of them, which most simulation fans consider as natural as breathing, so be advised if this sounds dull.

In terms of stability, getting Civilization II to run on modern 64-bit operating systems can be difficult. It can be done, though it requires several fan patches and specific versions of the game (Multiplayer Gold bare minimum, the original version will not run except via a VM or a 16-bit compatibility layer like Winevdm for Windows 64-bit). Linux users via Wine can get it working, though they may have to disable the video playback if they cannot get Wine to install the proper video codecs. In a virtual machine or a VM version of Windows 95-XP this should run flawlessly. There is no fullscreen, though it scales well enough if the window is maximized on the average widescreen monitor. 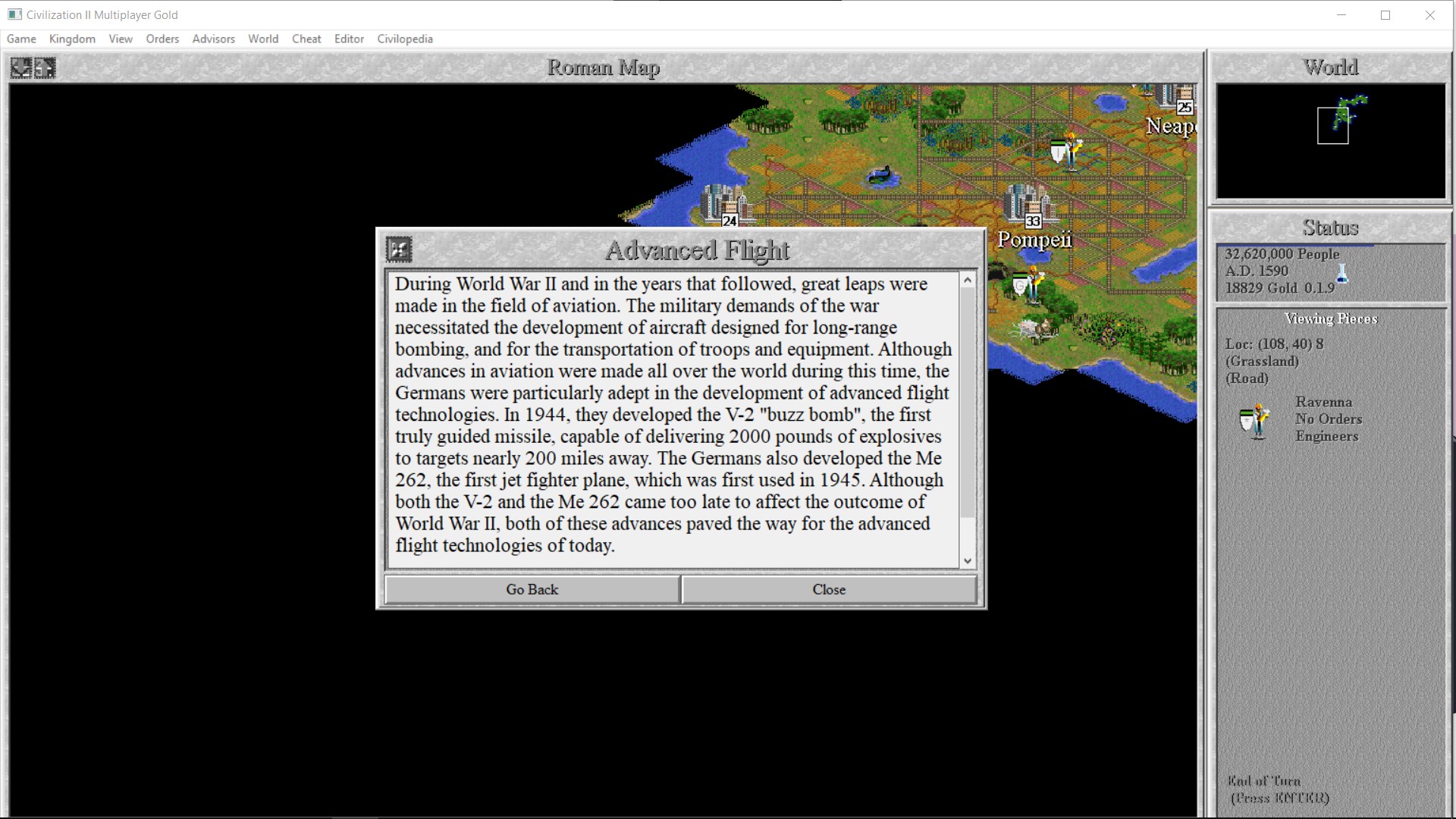 I was not able to test multiplayer. While it can be done using third-party tools to set up a game connection, I did not know anyone I trusted with a copy of this game, so I cannot guarantee anything about this. It should be considered not working by default unless you use third-party tools, and if it does work, this is done at the player's own risk, there is no language filtering or anything else to my knowledge using external resources to set up a game with human players.

Morally, there is not very much to complain about.

The violence in this game is incredibly sterile, turn-based "give orders and watch it happen style". Units that are defeated disappear immediately and no blood or gore is depicted. You may choose to win by waging war and conquering other nations, this is a perfectly valid strategy in the context of the game, though winning via other means such as a space victory or simply achieving a higher score are perfectly valid alternatives as well.

The word d**m shows up a total of once, as part of one of the advisor quotes (the context is your military advisor is griping about the rest of the advisors hamstringing the military budget, using the word to dismiss them as an annoyance), but that's all. If advisors are turned off, then you won't even see this.

There is no sexual content nor occult/supernatural things depicted. References to various religions are brought up, as this is a historical game depicting such things in an educational context, but there is nothing offensive in doing so. Some generic buildable World Wonders and upgrades reference various religious buildings from different cultures, but they merely provide generic in-game bonuses, no one religion is explicitly favored over another.

Morally and ethically, you can choose to break alliances and violate diplomacy conducted in good faith by either the AI or human players. Given you are a world leader in the game, there are no authority issues, as you are an authority. Otherwise, there is nothing to be concerned about.

Overall, this game is the apogee of the Civilization series and it is highly recommended if you can hunt it down, dated as its mechanics may be. Technically, once you get it running like it was intended, it runs fine, but even with patches and fixes, it's still got some limitations. Morally, this game is quite suitable for almost any age and would be a good educational tool. If you like 4X titles or want to play one of the finest games in the Civilization series, this one is still worth coming back to even now, assuming you can get a copy and get it to work well.