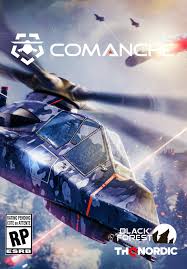 Thank you THQ Nordic for sending us a review code!

The Comanche series has been around since the early nineties and has sold 2.5 million copies cumulatively before the release of 2001’s Comanche 4. In 2016, NovaLogic, the makers of the Comanche series, was bought out by THQ Nordic. A few years later, Comanche appeared on Steam’s Early Access and was fully released in the summer of 2021. Sadly, this installment has been a disappointment for fans of the series. If you’re looking for a game to play online with others, you’ll have to look elsewhere as this game’s online community is dead.

The single player campaign has eight missions that will give you Steam achievements upon their completion. Before diving into those, it’s a good idea to do the tutorial to learn the basics of controlling and attacking with your helicopter and drone(s).

Each mission spans several chapters that will automatically save at every checkpoint. In the event that you die, it’s good to know that you won’t have to start over from the beginning. You’ll get different helicopters and drones with unique loadouts necessary for the mission at hand. There’s a limited number of rockets and missiles so you’ll have to use them sparingly and rely on your aim and bullets more. You’ll have to take some breaks from using the bullets as they’ll overheat your chopper if used in excess.

The Comanche is ideal for disabling turrets, tanks, boats, jets, and of course, other helicopters. There are many narrow crevices and buildings that your chopper won’t be able to fit through. In these cases, you’ll have to deploy your drone that has to be within range of the helicopter. The drone is capable of hacking interfaces, dropping viruses, and shooting down enemy drones and soldiers.

If you’re hoping for a helicopter-centric game, Comanche may disappoint you because you’ll be spending half of your gameplay controlling the drone. While the drone and Comanche use the same basic control scheme, the helicopter is a bit harder to control. Landing is especially tricky and I’ve died multiple times attempting to land at a healing helipad and crashed near it instead. I’ve also been shot down from straying from the mission zone, despite attacking enemy bogies that I was instructed to attack.

Combat violence is a given and although you’ll be shooting down soldiers with your drone, no blood is shown. I’m not sure why it’s mentioned in the ESRB ratings. Foul language on the other hand is present. You’ll hear hell, d*mn, son of a.., and the word b*stard.

The voice acting is pretty well done and the voice actors have a variety of accents and call signs. One of the few females goes by Baroness. That was one of the cooler call signs in my opinion. I thought Frog Man and Dog Lord were a bit unusual. The sound effects of the various combat vehicles are believable.

Graphically, this game is decent and it was made with the Unreal 4 engine. The vehicles are nicely detailed and the explosions and water effects are nice.

As I mentioned at the beginning of the review, the multiplayer and online communities are inactive. There is a Discord server, but there’s not much activity on it. Unless you have friends with this game, don’t expect to play it online.

Given that this game is single-player only these days, I have a hard time recommending it at the $20 price point. I have seen it on sale for $9.99 and for that amount it’s worth checking out if you’re a fan of the series.