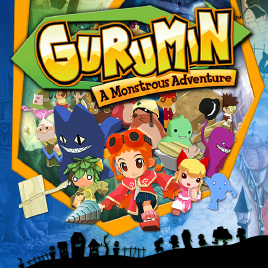 Thank you Mastiff for sending us this game to review!

Gurumin: A Monstrous Adventure was originally a PC game, only available in Japan back in 2004.  It was later ported to PSP, and Mastiff brought it to the US in 2007.  Now, Mastiff has updated the PC release with modern controls, graphics settings and widescreen support, and reused the PSP translation and voice overs to bring the definitive Gurumin experience to PC.

Gurumin falls somewhat outside of Falcom's typical fare; both Ys and Trails in the Sky follow the more typical teenager/young adult who saves the world (or their slice in it).  Here, Parin is a sassy twelve year old girl who, being the daughter of adventurers, comes to live with her grandpa in an old mining town.  She quickly finds herself rather alone – there are no other children in town for her to play with.  After exploring a bit, she quickly discovers a little girl who needs rescue from a barking dog.  After using her Super Pretty Missile Kick to keep the dog away, she quickly discovers that she's not a girl, but a monster!  Nearby, there is a connection to Monster Village, and only kids can see monsters.  Parin quickly finds that her life isn't so boring anymore, as playing with her monster friends makes the days go by much more quickly.  Soon after, the phantoms appear and soon bring harm to the monsters.  It is up to Parin to save them with the Legendary Drill.

Rather than the more typical sword, a drill allows for some interesting game mechanics.  This is a 3D third person action RPG, not unlike a 3D Zelda game.  While she can attack enemies with various combinations of stabs and slashes, she can also charge up her drill and affect the environment.  She can destroy rocks, trees, and various weak walls, which gives each level an exploration component, further enhanced by deftly placed secrets spread throughout.  The game rates you based on how well you did, so if you managed to leave a jar unbroken or monster unbusted, that S rank (rather than a more pedestrian A-C rank) will likely elude you.  As you bust up enemies, they poof away, and leave behind Pockles (money) and sometimes junk.  Pockles are needed to buy new headgear, and junk can upgrade them to make them much more useful.  Depending on that rank, you also earn medals.  While silver or bronze just translate to Pockles, gold ones can be traded in for rare and more powerful headgear. 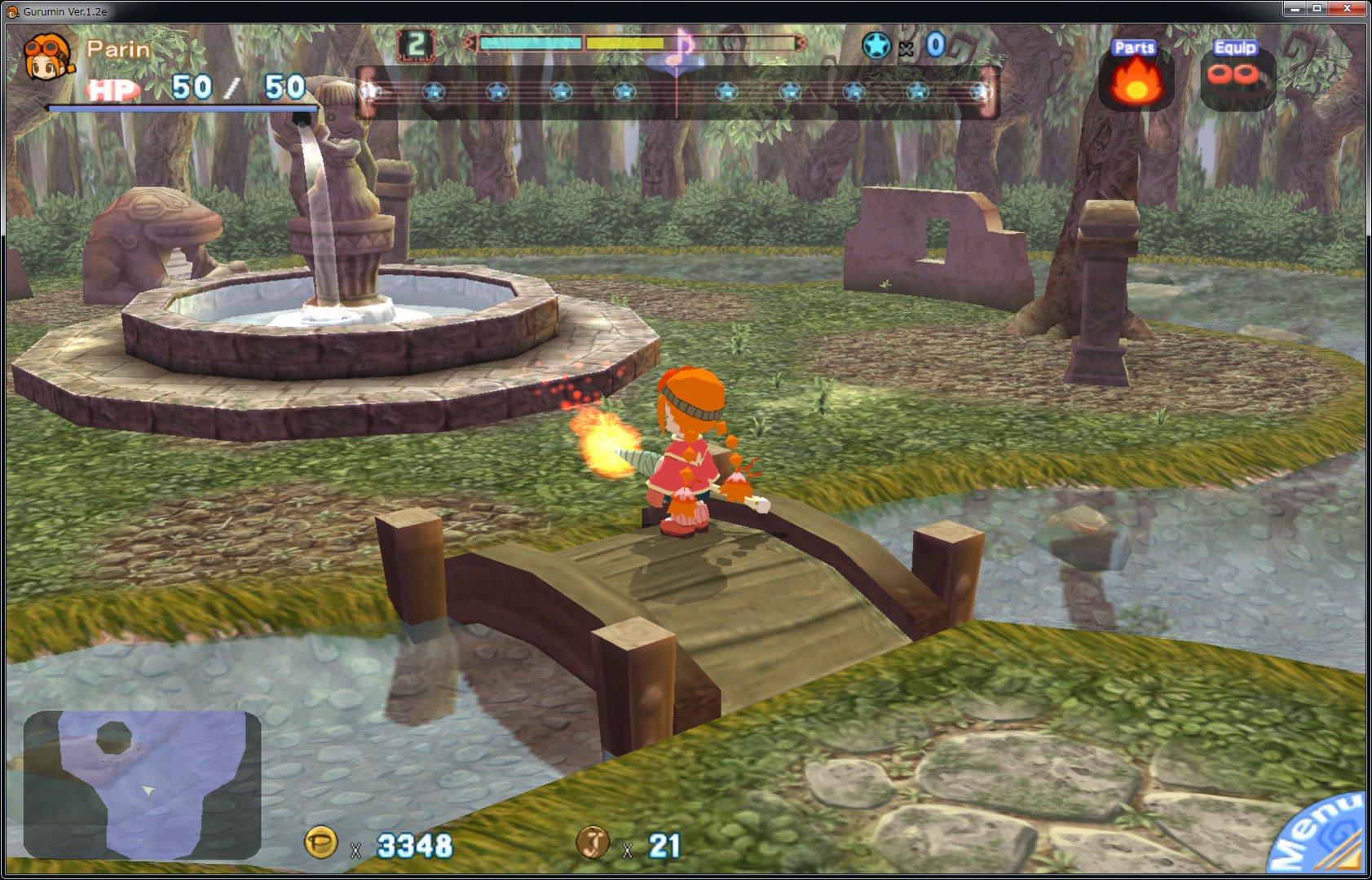 Headgear turns out to be one of the main elements of strategy, since it's the only practical piece of equipment you get, other than some elemental attacks you also get later.  Each of them has some special ability, like protecting you from water or gas, and gets much more powerful when leveled up with junk.  Collecting headgear and other items is half of the fun of this game; there is always something to yearn for if you are completionist.

In many ways, this game plays like a classic 3D platformer, and that's a good thing.  It has a certain feel to it that is just right.  I have undoubtedly missed jumps, but the controls themselves always felt right – it was my fault that I messed up.  Beating up the phantoms is enjoyable, and rhythmic – indeed, there is a metronome on the top of the screen, and if your hits land along with the beat, they strike as criticals.  Also, you can combo jumps, dashes, and attacks in satisfying ways.  Dashes can also be handy in avoiding attacks or other obstacles.

It has to be said and with emphasis on one important fact: this game is cute. Really, really cute.  Everything from the cell shaded graphics, to the anime-like expressions (with huge eyes and all of that), to the character and monster proportions – it oozes cuteness.  It is further accentuated by the game itself, rather intentionally, by Parin's outfits and headgear.  Outfits are rather rare and difficult to unlock; for example, the first one most people will get is a reward for beating the game, or another can be purchased for 99,999 Pockles (the maximum money you can get in this game) in a rather obscure shop.  But headgear is much more common.  Even the first one you get, goggles, makes her look even more cute than she does already.

Some of the outfit combinations, while quite cute, are a bit of a humorous nudge to any adult gamers playing.  While I have not unlocked them all, I did go through the substantial effort required to unlock both the maid outfit and the maid hat.  With only one of them equipped, she may look cute, but nothing else.  With them both, Parin's voice transforms into a more alluring one, saying maid-like things.  Things like 'Let's clean this place up!' and 'Time to take out the trash!' are said in a rather 900 number-ish way.  (I wouldn't know this from experience!)  I have to admit the first time I heard it I laughed out loud.  It's likely to go over most kid's heads... nevertheless, it's clearly worth pointing out.  From what I understand, some of her other outfits reflect other similar stereotypes, but none of them are sexual in nature graphically, with the worst one showing off a belly button (and requires a serious time commitment to unlock). 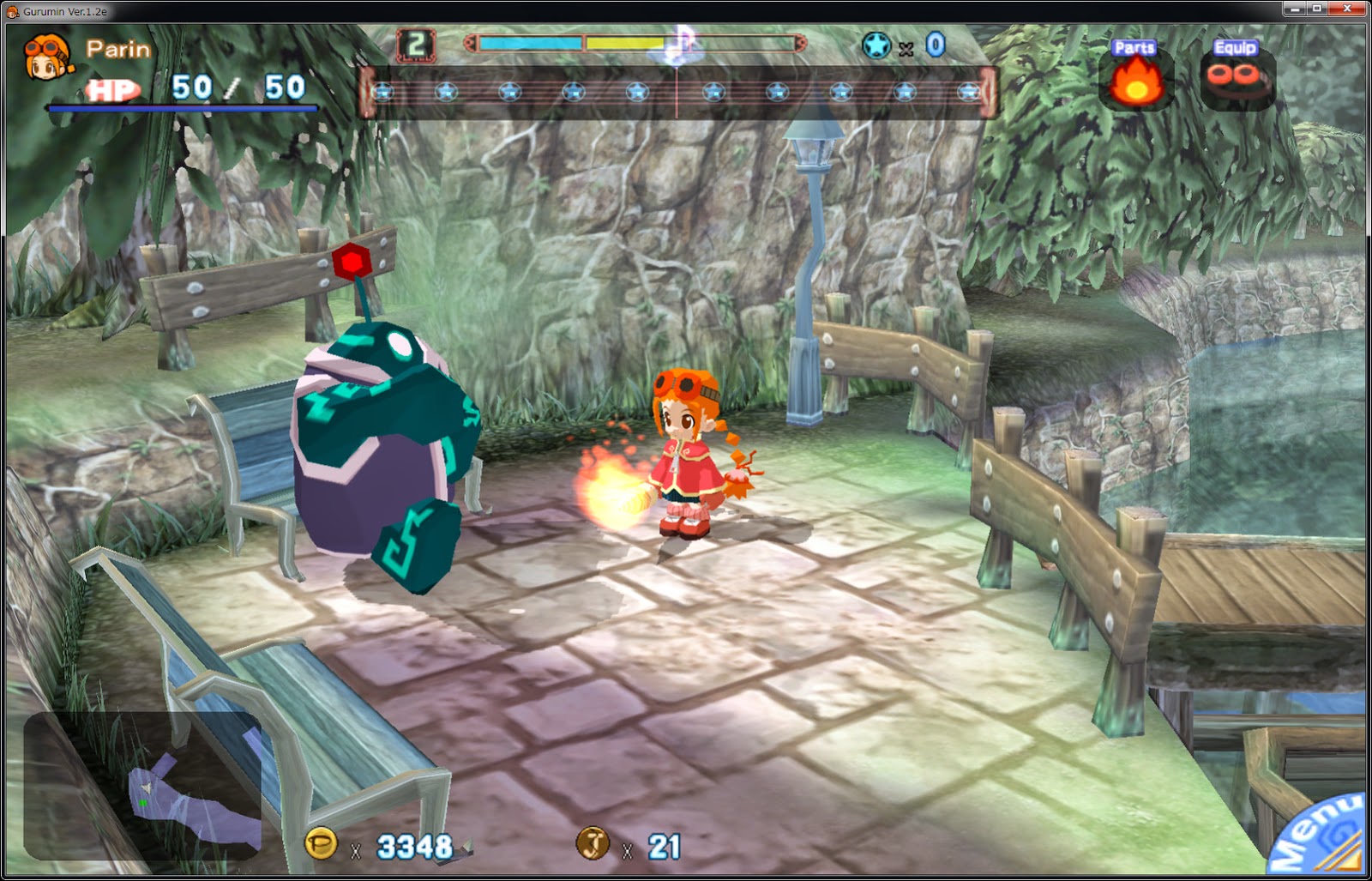 While the game as a whole is definitely safe for most, one of the enemy phantoms is clearly a male character who cross-dresses and is attracted to a certain other male phantom.  He speaks with a lisp, and competes with a female for this monster's attention.  He never seems to give either of them the time of day, and there is no sign of reciprocation whatsoever.  In an otherwise mostly clean game, it kind of sticks out as odd.  I noticed no language issues, one small mention of tobacco (it lit a fire that had negative consequences in the story), and otherwise typical cartoon violence.  No humans (other than Parin) are hit at all in the game.

Like many Falcom games, the music is really great.  Now, it's not your typical Ys fare – while a few songs have a more hard rock presentation, most are happy-go-lucky, as you might expect in a game aimed at children.  Nevertheless, the quality is top notch, and some of the songs, especially near the end, are truly great.  I am always pleased by any Falcom soundtrack, and this is no exception.  The voice acting is also really well done.  The only bummer is not audio related, but I saw some minor glitches.  For example, the screen resolution doesn't go above 1080p, and on the very top and far left of the screen, there are some graphical artifacts.  After being leveled up a few times, some of the item descriptions are cut off or scroll in strange ways.  I also saw a few typos; not common, but enough to notice for a detail freak like me.  (Or maybe that's monster?)

Gurumin: A Monstrous Adventure is a very enjoyable and memorable game for me.  My children, daughters especially, have quickly taken to it and love it to death.  My ten year old, who rarely plays platformers, has played this far more than I ever expected.  I thoroughly enjoyed my time with Gurumin, and highly recommend it to anyone who loves these kinds of games.  Especially for the bargain price.  A single playthrough can easily take anywhere between 15-30 hours depending on how thorough you are.  My only caution is that if you let your kids play it, you may have to have a good explanation for that weird guy that Parin calls a lady (and gets scolded for it).