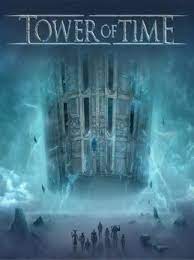 Thank you Event Horizons for sending us a review code!

Tower of Time is an RPG offering from indie studio Event Horizons. In the tradition of computer RPGs, Tower of Time places a heavier emphasis on tactical combat, rather than the storytelling of JRPGs. It’s a game that will interest fans of the X-COM or Fire Emblem games with its promises of a good story and deeper combat mechanics, combined with the viscerality of a hack’n’slash such as the Diablo games.

Tower of Time presents you with a post-apocalyptic world, one permanently clouded so thickly that plants don’t get the sunlight needed to grow. It’s a wonder how life has managed to survive the 1000 years cited in the opening cinematic, but somehow it has. As a decorated war hero, your king has given you leave to return to your home town and explore an ancient tower you found in your youth. Supposedly this tower has the necessary power to cure the world of all its ills and restore the land of Artara to its former glory.

As you travel deeper into the tower’s depths, you’ll discover more about the world and history of Artara – how the humans coexisted with elves, dwarves, giants and shadows, and how magic originally didn’t exist. You’ll also gain additional companions as you advance, each with their own motivations and backstory, and they also develop and grow as people throughout the game. Occasionally you’ll be required to make a choice, and champions will react accordingly to the way they’ve been written. This is especially interesting on one of the middle floors when your champions are separated and undergo personal trials. I was very pleased to find that each champion’s trials were intimately tied to their personality, and the game in its own way asks if you’ve been paying attention to the champions – the correct answers are not a matter of morality, but of matching it to the champion’s personality. I would have liked more of these choices, but understandably it’s not the focus of the game. 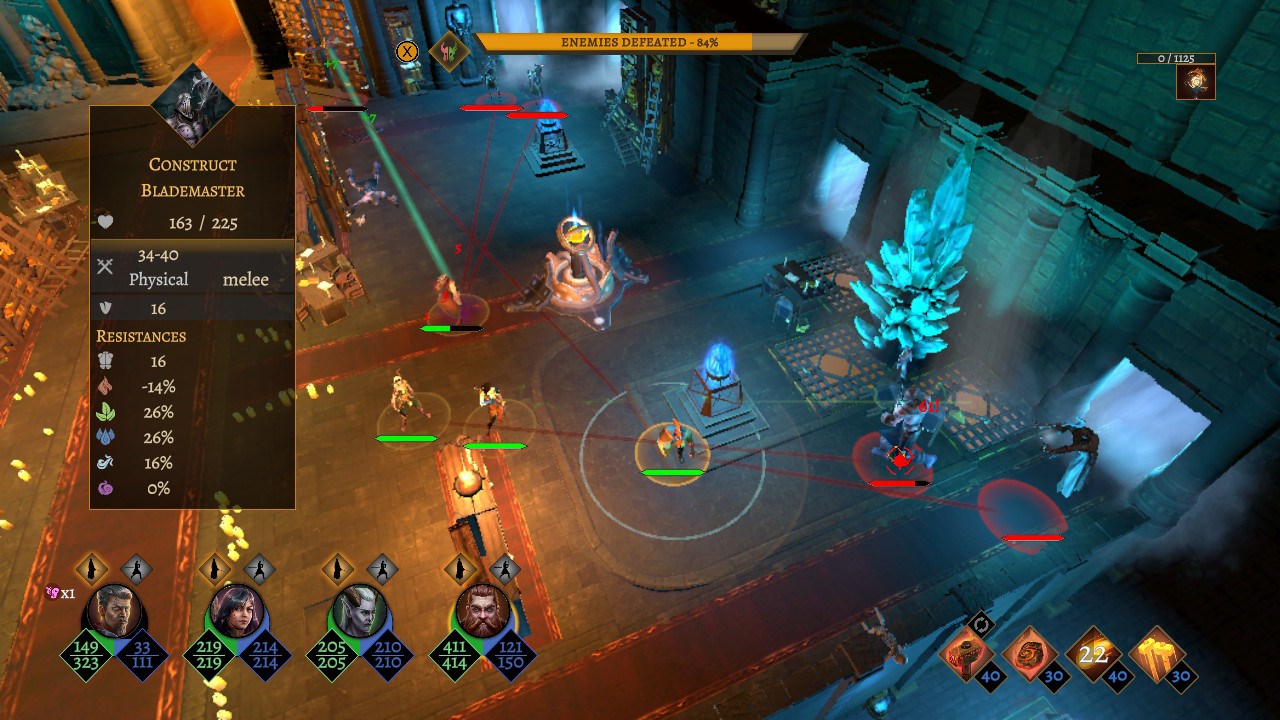 No coverage of Tower of Time would be complete without addressing the ending though. It is of course poor form to spoil it in a review, but suffice it to say that while it’s executed well, it’s not a straight and neat ending. The game is constantly foreshadowing it through the tone. Plenty of hack’n’slash games involve saving a dying world against the backdrop of a coming apocalyptic battle, and that’s no different here. There’s plenty of color to the superb visuals, but it’s of a slightly sickly hue, and there’s no sunshine or rainbows. The gritty shadowing is ever present, ready to pounce. The soundtrack is equally oppressive (in a good way), impressing upon you the weight of decisions both past and present, and reminding you that the world hangs in perilous balance and that time is short, even as it encourages you to press on through trials and tribulations. The game did crash to desktop on me just the once, but I'm pretty sure it isn't intended to complement the aesthetics. Remember the aesthetics as you reach the end - Tower of Time is trying to tell a certain kind of story, and it does this very well.

There’s a second elephant in the room that needs addressing at this point, before looking at the gameplay mechanics. Whenever a game such as Tower of Time bills itself as a “Tactical RPG,” the demands of these two genres are typically at odds with each other. Tactical games want to keep the character’s capabilities mostly static against ever increasing odds to emphasise the player’s understanding and application of the underlying mechanics, rather than the champions they control. RPGs on the other hand push primarily for the growth of characters, allowing players to eventually become powerful enough to steamroll through any and all content with minimal need for strategy. Lean too heavily towards tactics and the RPG elements become meaningless. Lean too heavily towards RPG and the champions are either too weak to win or so strong that tactical plays become an afterthought. While I enjoy tactics and RPG games, my experiences time and again are that this genre fusion walks a balancing act that is extremely difficult, if not impossible. This is an observation that Tactical RPG enthusiasts will no doubt relate to. It’s understandable that while I was excited to play this game, I was equally apprehensive about its balance. We’ll come back to this in a bit.

When looking at the trailers for this game, I thought the combat would take place within the world, much like playing through a hack’n’slash, but to my disappointment, the exploration and combat are separate modules. Much of your time will be spent clicking to move around (with the occasional bit of haywire pathing), and clicking on things to get a bit of lore or activate objects. Occasionally an enemy ambush pops up out of nowhere, but most encounters are static. Enemy groups will stand around waiting for you to inspect their statistics, and then you can fight or withdraw to change up your equipment. The settings menu has an option to change your movespeed during exploration, but I found the “Fast” option to still be a little slow for my liking.

Once a battle starts, your chosen party of four is whisked away to a specially designed arena. Here you issue orders to your party members in much the same way as an RTS. Select the champion you want to issue orders to, instruct them which spells to cast, where to move, who to attack, repeat. Enemies emerge from fixed spawn points, rather than all of them being present at the start of the battle. Annoyingly, the camera boundaries stop just short of some spawn points; while the full battlefield is still viewable, I couldn’t center the camera the way I wanted, and two of the arena layouts even obscure your view with obnoxious totems near one of the spawn points. Some battles have objectives, with tasks such as killing the boss, destroying enemy-spawning portals, destroying enemy towers, protecting your own power cores, or even imprisoning party members when ambushed. In most cases though, it’s simply a battle of attrition – kill all the enemies and don’t die. Perhaps I’m just a little too spoiled from the tactical depth of Frozen Synapse’s AI and other games more focused on tactics, but I found the enemy AI to be incredibly simplistic and without subtlety. All creatures simply charge the nearest player, or the most threatening player, without waiting for backup, and without trying to flank players or otherwise display any coordination. Tactical depth comes primarily from the timing and placement of your spells to cut off chokepoints, and while spell effects are certainly pretty, layering multiple spells over a champion can make it impossible to see what’s going on in that area. The importance of positioning is mostly limited to avoiding open areas, and later in the game even that is abandoned as it’s simply faster to charge at the enemies to kill them faster. It’s not particularly deep on the face of it, but it’s no less fun watching your champions completely dominate the opposition. 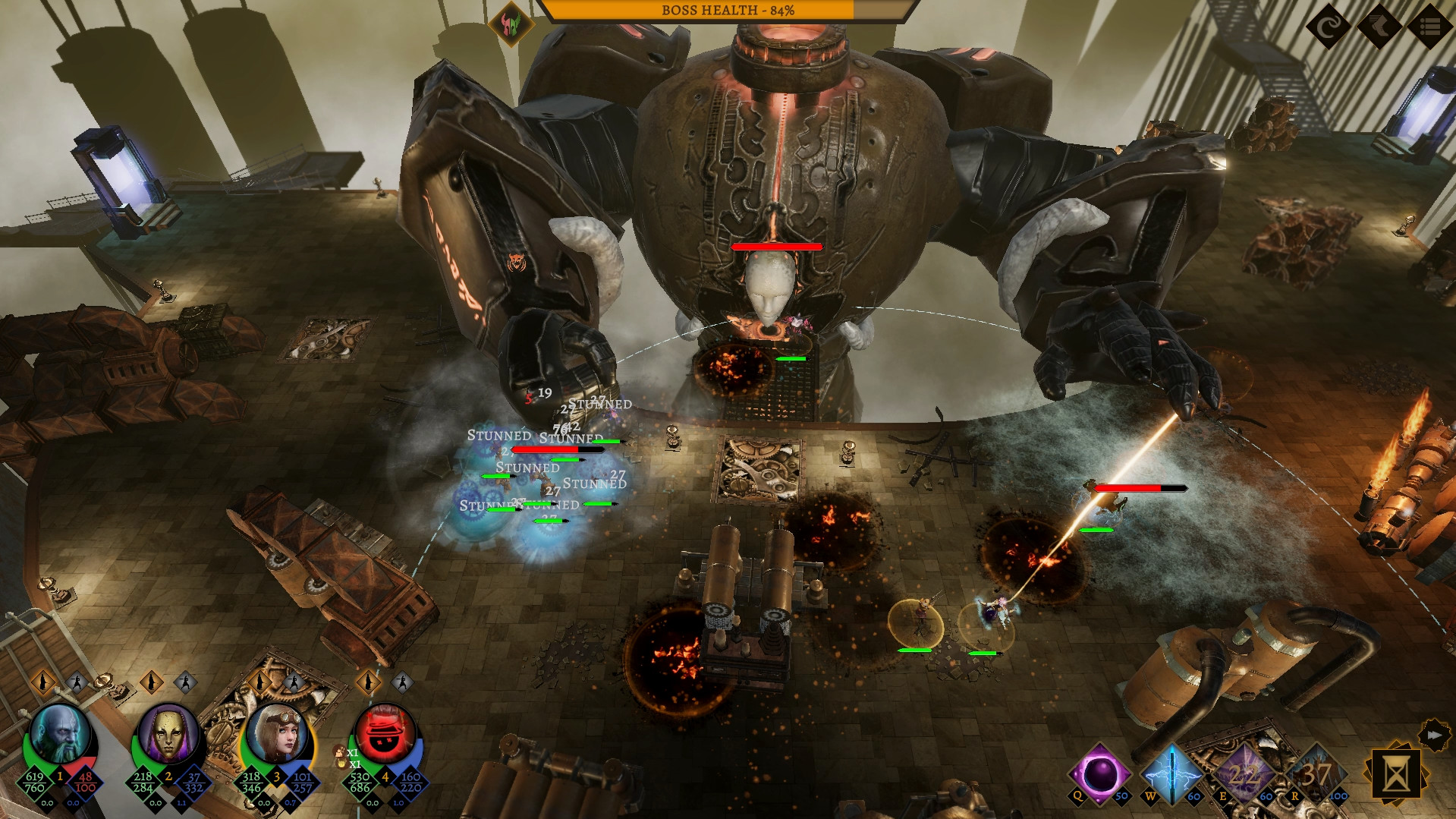 I have to re-iterate what I said earlier though. While I do have issues with the tactical side of the game, these problems are inherent to all Tactical RPGs. It’s on the RPG side that the combat loses its tactical depth. Champions level up throughout the game using looted gold, they gain (or craft) and enchant better equipment, their spells improve, and the available synergies expand. I found that even on the Epic difficulty setting, the RPG scaling trivialised combat by the end of the first floor of the tower. Customising your champions is a lot like customising your hero in other hack’n’slash games such as Diablo or Torchlight, but with multiple characters. The options here are broad and deep. You can go full damage and hammer everything in a wild flurry of bullets and rage. You can go full tank and just refuse to die. You can go full caster and blow things up in an excessively gratuitous light show of graphic effects. My favourite was taking a full summoner party and creating an army of over 50 units on the battlefield. Regardless of which option you choose, all options are viable, although some setups are only workable late in the game. Fortunately, it’s very easy to change your party setup at any time, and the cost to do so is minimal.

The RPG scaling issues are actually handled fairly well, all things considered, but they are alleviated significantly with the RPGlite and Permadeath modes, and the game is certainly worth a replay if you came here for a tactical challenge. These two modes give you all seven champions at the start of the game and allow you to fast-track every floor without completing main quests, giving access to items and blueprints much earlier than usual. This explosion of options actually exacerbates the problem, since some champion combinations can completely trivialise the first few battles, but the tactical score in these modes is the game’s solution to RPG scaling. The first few battles on each floor award you points for completing them, but every battle afterwards reduces your score – and most of the precious gold needed to level up your champions comes from battle. Playing to maximize your score will see you at the razor’s edge far more often as you take on ever increasing odds as you intentionally under-level your champions. This is where the tactical side of the game truly has room to breathe, if only just, and turns the rest of the game into a navigation puzzle. Tactically minded players will no doubt enjoy this mode a lot more; Tower of Time is practically a different game when playing for score.

As you’d expect, violence of the RPG sort is aplenty in this game. Plenty of things die, blood pools, and corpses disappear. While some of the flavour text alludes to dead people in the room, their corpses are never present, eroded by the passage of time; even that avenue of nudity is closed off. Language is almost perfectly clean - one of the champion responses is "unleash h*ll!" Deeper into the tower, the party will come across a radicalised religious sect led by a false prophet, and with a clear racist bent.

There’s plenty of fantasy magic as you might expect, but the cosmology of the universe makes this category a bit of a curve ball. The world of Artara is much like ours – there was no magic to begin with. Technology advanced to a point much like ours before magic first entered the world. It’s revealed early on that the use of this magic came with grave consequences such as loss of vision and hearing, and being devoured by the magical energies. Later on comes the revelation that it’s actually an exotic form of energy from another universe with different laws of physics; in a sense, this magic is not magic but simply the application of an exotic physics. But it can’t be denied that the game shows grave consequences for the use of magic, much like there are spiritual consequences in the real world for accepting any form of supernatural power from the devil.

Tower of Time will take you about 50 hours to traverse all ten of its floors. There’s a rich story to be had here on your first playthrough, and while the RPG elements do water down the battle tactics significantly, subsequent playthroughs for a high score will yield a much deeper and satisfyingly crunchy system of carefully interwoven mechanics. I thoroughly enjoyed my time with it, and have no doubts that this game will well and truly stand the test of time.