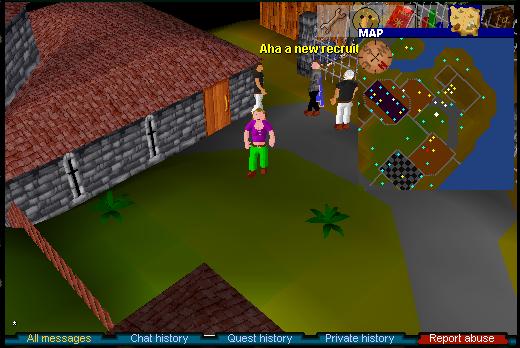 Runescape I would put into the RPG category but its really a MMRPG which means you have about at least 500 people playing with you that you can talk to, trade with, fight together, or against each other. It?s a free game and you do 16 quests all are different and many abilities and/or skills to level or even master. Though you can pay $5 a month or $45 a year for members and you get like 20 new quests and 5 new skills and sound effects.

Lame very lame but not to shabby for a free internet game, plus very soon hopefully we will be getting a 3D update which will be very happy. The game is overall not bad the fighting is cheesy graphic wise but its still a good game.

Umm Since I don't pay money I don't get sound effects but if you have a good CD then you're set.  Runscape gold is available at Only4rs.com.

Well there is no real story though they now have an ongoing quest but other than that its pretty much a free for all on what you can do. Whether you will PK (Kill other Players) or mine and get cash, its so open its like Elder Scroll III: Morrowind only with better skills and cash system.

Umm not much to tell here other than you can fight and make money or you can quest and get rich or you can fish, mine, smith, cook, fletch, herblaw (make poison arrows etc.), and all kinds of other things. And it takes so STINKING Long to master a single skill that you would either have close to none or have no life.

Not to Shabby actually, the game has a word filter which works pretty well, however some people can mistype words and it works, there are wizards and cheesy looking demons (which are only considered as monsters). Prayer is for sarodimin, and that just increases your str and def, etc. You raise your prayer level by burying bones you get when you kill something like a goblin or another npc. at this present moment zomorak does nothing, its just a name in the world of runescape. Other than that I cant think of any inappropriate things in the game. MrCoolMan89's comments: Runescape has a few five point stars in it and you can pray to the evil God Zamorak. You'll also find burning skull heads and some other creepy stuff. You can also choose to drink alcohol and shoot people with arrows. So there is a little violence but there is NO blood.

GML's comments: Occult: The name Runescape pertains to 'Runes' which are occultic symbols and writings used by occultic high priests throughout history and even today. Witches use 'runes' to guide thier decision making, etc. Runescape players consistently use 'runes' throughout the game. The game also features a demon god in which players can go to the 'alter' to pray /worship to gain power and help their character. Characters can kill other's live characters, and even drink alcohol if they so choose, etc. The characters can go 'craft' and go to 'dropping parties' to get items...which sound seem innocent when it pertains to hand-making items and geting items at a party, but the 'lingo' sure resembles the referrence for witchcraft and drugs. The Runescape site has a huge following and referrenced in many satanic and occultic websites throughout the search engines...yet non-occult players would not know this unless researching online.

Online Safety: It is common for 16,000 people to be playing at the same time with each other. Players can chat with anyone or restrict themselves to 'buddy lists' of personal friends only, but parents BEWARE: Kids often resort to allowing total strangers on their 'buddy lists' in desperation for help to attain items from advance players with higher level status. There are many 'hackers' who play and are proud to reveal their secret recipe into hacking into other players passwords. This is found throughout the internet.

Addictive Behavior: Runescape is extremely addictive as shown in behavior by noted players...just read the forums out there. (Kids often play for hours and do not want to eat or complete homework!) Runescape is addictive due to the 'sensationalism of power' players experience in which they may not even aware of. It is a game with no ending, and it can not beat or finished, yet obsessed players are driven to keep returning to it. Role Playing - an RPG game puts the player in control as an 'active participant' who makes the conscious decision to step into a game realm with occultic involvement. This places a moral responsibility on the player as well. Is this was physical storefront, would it be a place a Christian would walk into or hang out with strangers, occultists, friends, etc? Please prayerfully consider what the Bible cautions and advises us on these sesnitive issues. --- I always play with a 56k modem and I do pretty well but sometimes you can lose your connection which is the biggest pain in the world, and every once in a while one of the servers are down but they have like 10 so its not bad.