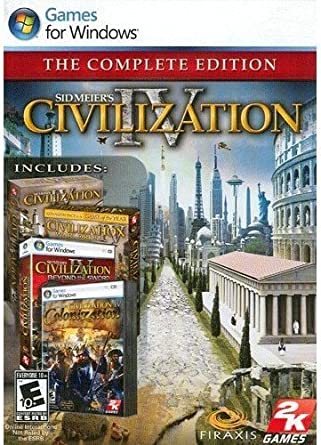 Note: This will cover the base version of Civilization IV and its expansions, Warlords and Beyond The Sword. It will not cover the Colonization remake, since its mechanics are so greatly divorced from the stock engine it's essentially its own game that deserves an independent review. Technical criticism of the religion mechanic will be covered alongside the moral criticism in the moral section since the critique is interrelated.

The fourth version of anything typically tends to be when creators decide to seriously innovate. This can add a lot of interesting new features, but can also have them not work as well as intended. Sid Meier's Civilization® IV is a textbook case of this, adding a lot of new things to the series, but their implementation is rather mixed.

Like all the other games in the series, Civilization IV is a 4X genre title (an acronym for eXplore, eXpand, eXploit, and eXterminate), a subgenre of the simulation genre typically involving the simulation of cultures and leadership of the same. The player assumes the role of a real-world civilization such as the Zulu, Germans, or Spanish to make their attempt at developing a flourishing nation-state prosper.

Civilization IV is technically three games in one, as each has its own executable to start, but they all use the same base Civilization 4 files and engine. The base game adds many new features to the series such as Great People (who can hurry production of World Wonders, add one-time culture and money bonuses, etc.). It is the first game to also add religions (which confer diplomatic and cultural benefits). Civics (a more flexible form of the static governments from the previous games) was included so you can mix and match government types. As a more general addition, the game AI was made considerably less predictable than prior games.

The Warlords expansion offers a game tweaked for conquest and military scenarios and also added several more units and structures. The Beyond The Sword expansion also added several new features such as Corporations, an economic advance that added a metagame mechanic to the economic tech tree. Randomized events (both harmful and helpful) were another addition, and expanded victory and civilization customization for more carefully curated types of gameplay and win conditions are also included.

The standard gameplay from the previous games remains intact. You and your rivals will take turns on a hexagonal, isometric map. You will build cities and map improvements, research technological advances, conduct trade and diplomacy, and otherwise try to carve out and establish a thriving civilization, either by way of peace or by the sword. Depending on certain factors and what endings are enabled, it is possible to win the game after so many turns either by conquering all your rivals or via several bloodless victory conditions.

Graphically, the art style tends toward slightly cartoonish compared to the previous games. On top of being in full 3D compared to the 2D of the previous games, the civilization leader portraits are now fully animated as opposed to the more limited animation from the previous game. One unfortunate problem is the poor font and UI scaling. At high resolutions, the stock UI is practically unreadable on very large monitors. This can be fixed by player modification of the UI files, but this option is not available without third-party work. 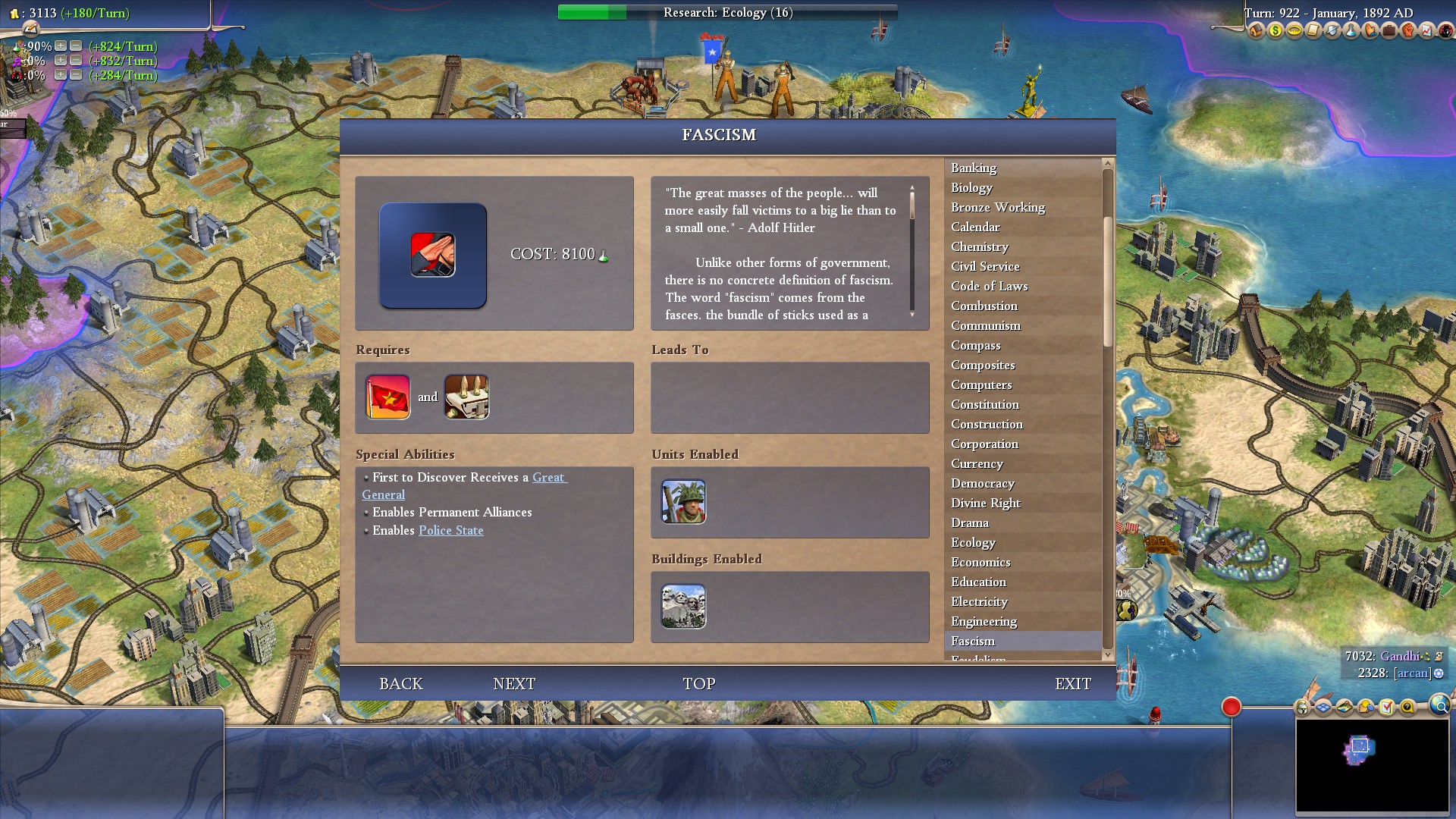 The sounds and music are quite good. The opening theme of Civilization IV is a breathtaking version of the Christian Lord's Prayer in Swahili and in-game many themes are directly modeled on both various music styles from the historical periods and national themes for specific civilizations. This is the first Civilization game that made extensive use of voice acting when discovering advances, with the late Leonard Nimoy reading off historical quotes related to the advances in the base game, while Sid Meier himself did the quotes for advances added by the expansions.

This title is controlled via keyboard and mouse only. While it is fairly intuitive and there are tutorials for the interface, the map scrolling may be needed to be tweaked by some users since the stock settings aren't the most responsive at times. At high resolutions, it can be difficult to follow the user interface due to the poor scaling, which can be fixed by third-party modification.

A high point of this title is the modification potential. The Steam version is based on the Windows releases, which have a fully open SDK for mod development, including modification of the base game DLL. Python scripting is used for mods, and while this game was released in older releases for macOS, all mods are based on the Windows version for optimal engine compatibility.

There is an online multiplayer component, and servers are still maintained by dedicated fan communities. LAN play is also supported for localized multiplayer. 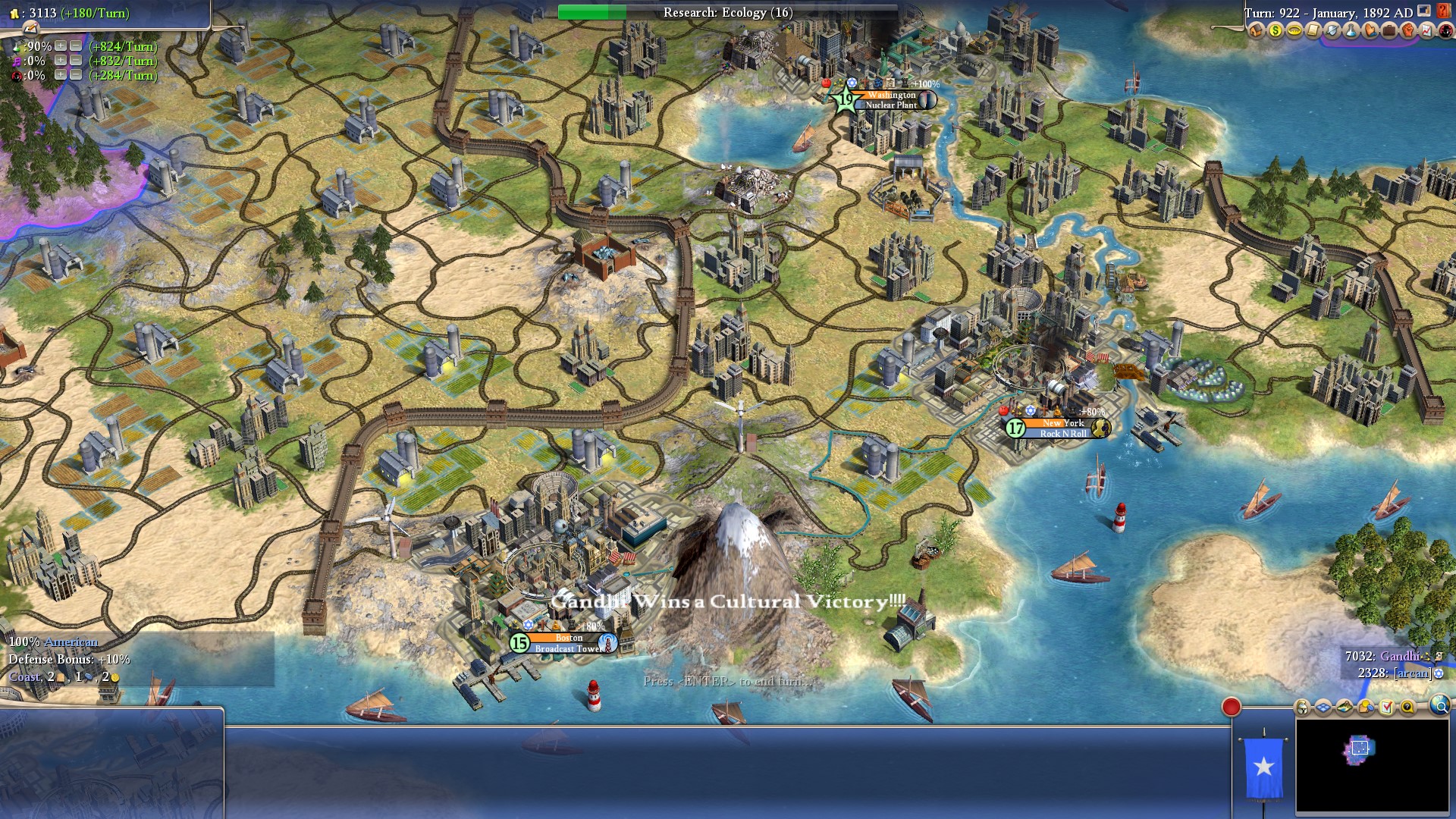 Game stability is a bit disappointing. Changing resolutions can cause game crashes the first time and even some of the officially bundled mods can cause game crash issues. While the overall game stability is decent, mods obviously can compromise this as well. This title is also not the most stable on Linux, requiring a few tweaks via the Steam Proton service. Its verification for the Steam Deck is also unknown at this time.

Morally, this game has few issues.

Violence is of the "give orders and watch it happen" variety, but this is sterile and bloodless. There are no language concerns of note, nor any sexual content concerns.

The religion mechanic in the game deserves some explanation. Civilization games view religion in historical and sociological respects, avoiding specific depictions of practices. As a result, religion, despite it adopting the names of real-world faiths, is rather generic in practice, merely serving as a cultural modifier and diplomatic wedge (some civilizations who practice different faiths will take issue if you do not adopt theirs). Further, the game gives out generic culture and other bonuses for building religious structures regardless of whatever faith you nominally have, which renders the religion mechanic more of a gameplay element than anything distinct in its own right. Otherwise, aside from historical quotations for discovering certain advances and the religions themselves, there is little else of note.

Morally and ethically, you have the option to win by aggressive war and deceptive diplomacy or to merely practice self-defense and good faith diplomacy, both are left open as viable options. Otherwise, this title has little moral concern.

Technically, it's got some issues but a lot to recommend, and worth buying as part of a bundle or on sale if you like 4X games. Morally, it has few things of concern and would be appropriate for almost any age, especially as an educational game. Admittedly, it's not my favorite in the Civilization series, but it's still a worthy franchise member.