Note; This review will cover Civilization V with all expansions and DLC factored in for the technical and moral evaluation. The modding SDK is provided separately on Steam as a free download.

Many series, if they make it to their fifth game in their series, have generally gotten a good idea of what works, what doesn’t, and what could be worth adding for the future. Sid Meier’s Civilization V is a game that, by its fifth iteration, manages to do this and overall, does it pretty well.

Like all the other games in the series, Civilization V is a 4X genre title (an acronym for eXplore, eXpand, eXploit, and eXterminate), a subgenre of the simulation genre typically involving the simulation of cultures and leadership of the same. Taking control of a real-world civilization, whether current or defunct, the player must help it prosper and flourish. These civilization choices can range from the United States, various Indian tribes such as the Shoshone, the peoples of Polynesia, ancient cultures like Assyria, the Ethiopians, and so on.

New to Civilization V is “City-States”. These are small, AI-controlled mini-states that the player does not actively compete with but can become pivotal trade partners, military allies, and diplomatic comrades, and they can be courted by other major civilizations to increase their influence, adding a metagame aspect that is especially important for victories based on diplomacy.

The ‘Gods and Kings” expansion has expanded and reworked religion mechanics from Civilization IV and improved combat AI for more tactical deployment of forces. The “Brave New World” expansion adds further enhancements to the nonlinear civics system of bonuses pioneered in the previous games and adds in the “World Congress” for additional diplomatic complexity. Finally, there are other miscellaneous DLC that add new civilizations and custom scenarios. 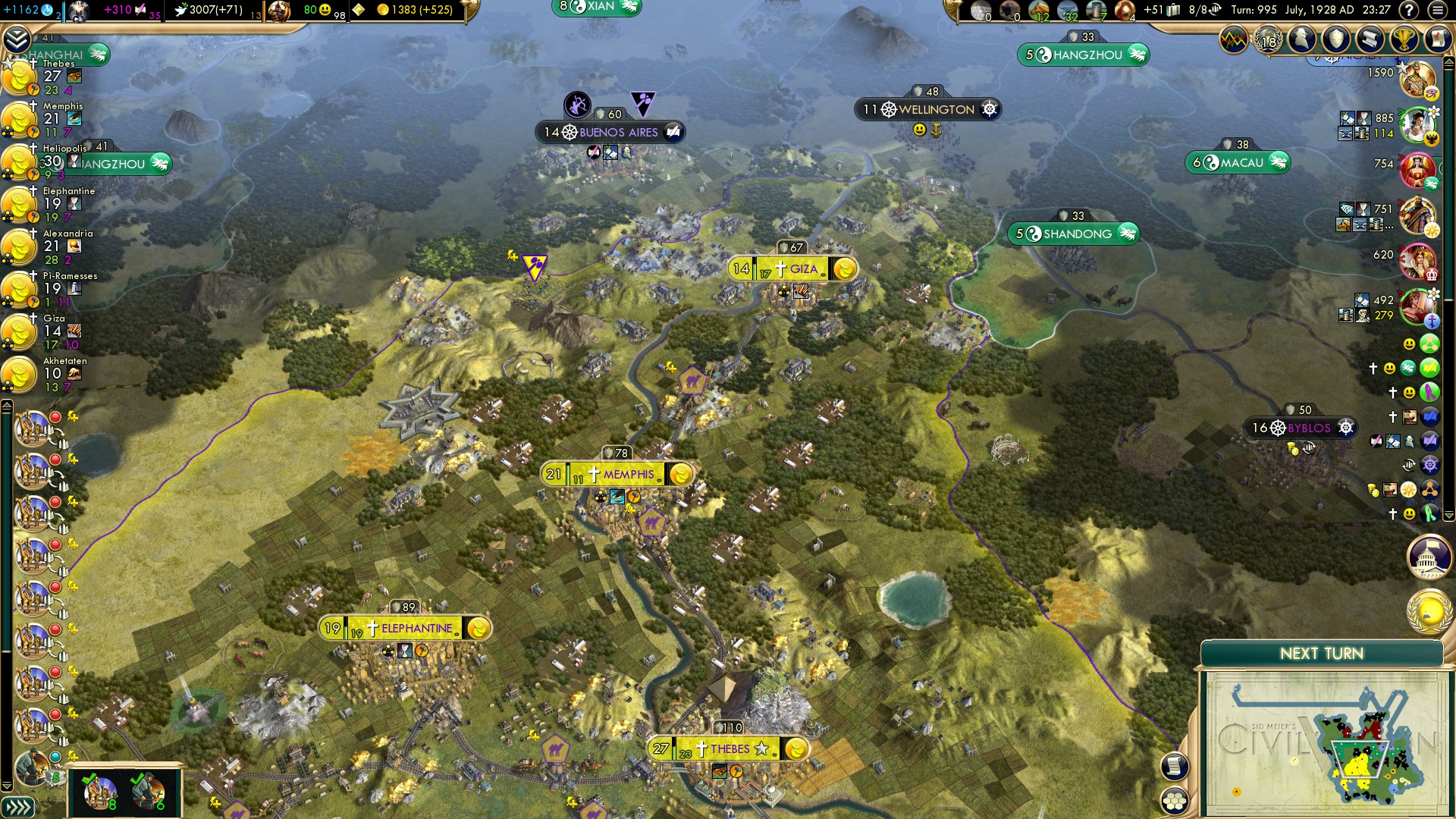 Strong Points: Polishes and further refines the elements of the prior games
Weak Points: Somewhat lacking in features unless you purchase all expansions
Moral Warnings: Turn-based RPG-styled violence; mild language (d*mn or h*ll in quotes, often from religious texts or quotations from others); Renaissance-style depictions of nudity from classical art; references to pagan proto-religious practices; option to wage aggressive war and/or practice deceptive diplomacy

Modding support was also further enhanced from prior games. There is now built-in integration with the Steam Workshop for uploading and downloading all sorts of player creations, though non-Steam mods are still supported.

Graphically, the style has shifted in a much more realistic and less cartoonish direction compared to prior games. The game maps now have more realistic tones, similar to real-world terrain, and units are also drawn more realistically. The world leader interaction scenes are now full-screen, fully animated depictions of said leaders drawn entirely to scale. These scenes are often based on actual depictions of the leaders in question, such as Napoleon, who approaches the player on a horse much like paintings based on him historically. There are two modes for the graphics. DirectX 9 sacrifices many of the animations and enhancements for older computers, while DirectX 10/11 is the much nicer-looking default.

The sounds and music continue to have a rich orchestral and vocal infusion like in the previous game, especially the opening theme “Terra Novum”. World leaders will now fully voice their dialogue in their native tongue or the closest modern equivalent for the ancient cultures that are now defunct. These scenes come with full subtitles in multiple languages, with English as the default.

Civilization V, like prior Civilization games, is generally intended to be played via the keyboard and mouse. Controller support is not primarily intended, though it can be played on tablets via remote play and with controller-style controls on devices such as the Steam Deck.

Game stability is generally fine without additional modifications, with modifications potentially resulting in decreased stability depending on how well they are optimized. This title runs natively on Windows, Linux, and macOS, and is currently confirmed as Playable on the Steam Deck. Like prior Civilization games, this game has the online capability for playing with other people, either locally or via players around the world. 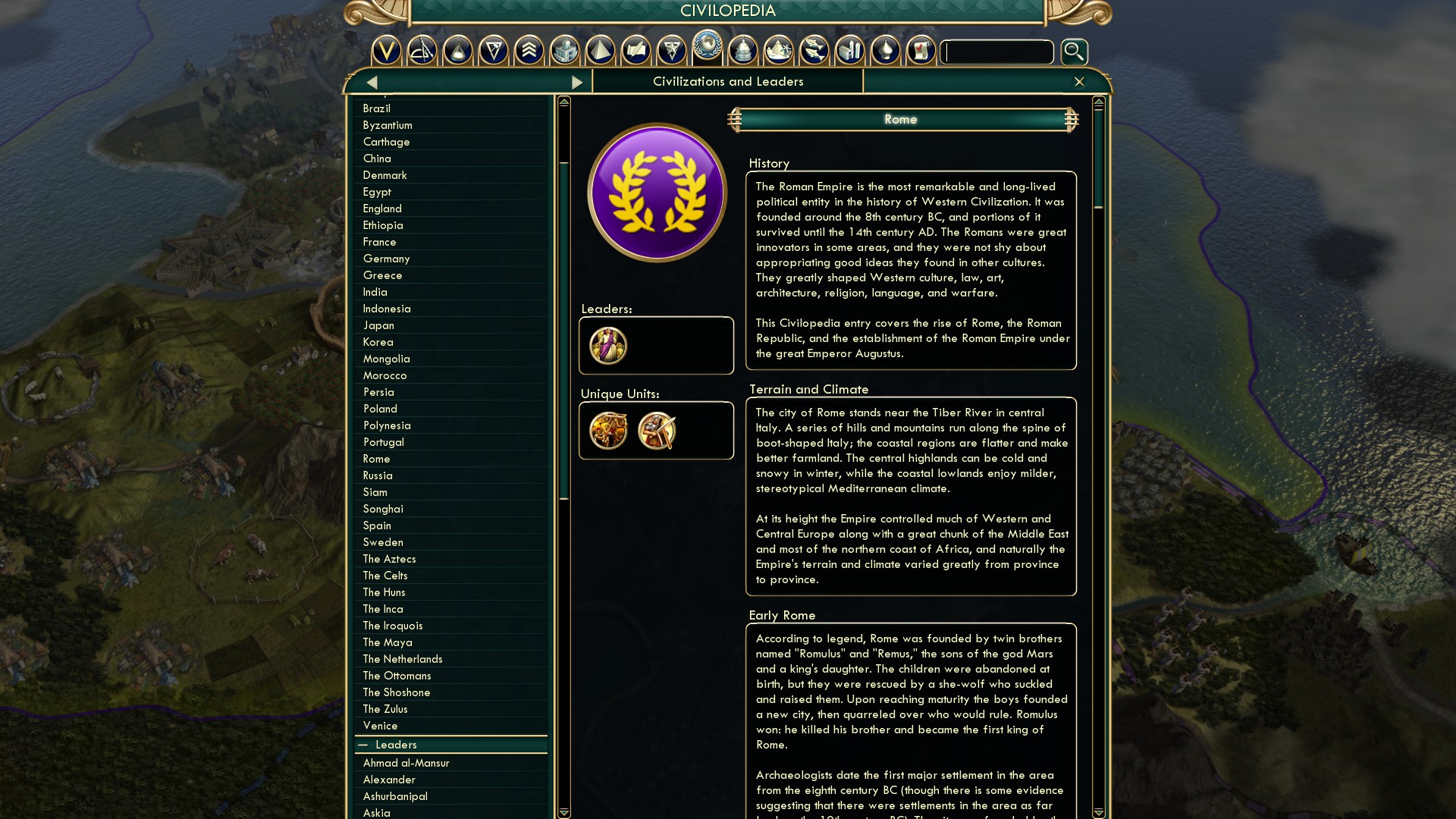 Violence is of the turn-based RPG style “give orders and watch it happen” variety should the player have to engage in combat for any reason. This is depicted free of blood and gore and certain violent situations can be reduced or eliminated via customizing the game settings, such as disabling random barbarians or even enforcing a total ban on wars of aggression.

Language in-game is not a concern. At most, they may reference a d*mn or h*ll, typically when referring to a quote from a religious text or allusion to such. Sexual content is also nonexistent for most aspects of general gameplay, as the world leaders are all depicted in sensible dress appropriate to their historical depictions. There is, however, some classical nudity of the Renaissance art variety, such as Michelangelo's “David” and Botticelli’s “The Birth of Venus” depicted when unlocking certain art and cultural wonders. It’s worth noting this art is considered of historical value and meant to depict the beauty of the human form, not necessarily for sexual purposes, but it may be of concern for parents not wanting to expose young children to nude imagery, even if said images are considered not to be illegal for public display (as they are often fixtures in museums, textbooks, and other educational and historical contexts).

Religion in Civilization games is depicted more for its historical and demographical value to the rise of culture, lacking any explicit display of practices, so for the most part the religion mechanic is simply a generic gameplay element that has interchangeable effects for all playable cultures. Custom names and symbols are also available for those wanting to avoid even using the name and heraldry associated with a real-world faith. Civilization V does, however, introduce a “Pantheon” sub-belief, to reflect the proto-religious beliefs of early cultures before adopting an organized religious culture. This is historically accurate, even the faiths of Judaism, Islam, and Christianity all have evidence of such (especially as depicted early in Genesis and Exodus), but may concern the devout of such beliefs. In practice, however, this is depicted absent any depiction of practices and serves as yet another game modifier with interchangeable effects for all player civilizations.

Morally and ethically, you are portrayed as a world leader, and you may either practice war only for defensive purposes and good-faith diplomacy, or you may practice aggressive war and break diplomatic agreements whenever you so choose, both are left open as viable styles of play. Otherwise, there are no outstanding moral issues of any major concern.

Overall, I would consider Civilization V one of the best in the entire series and entirely worth the time for any serious fan of 4X games. Morally, it has a few minor issues of note, but any reasonably mature teenager on up should be able to deal with the themes, especially given the educational focus. I would definitely recommend trying to acquire all the content in a bundle whenever it goes on sale, you get a lot of replayable value for a game of this genre.