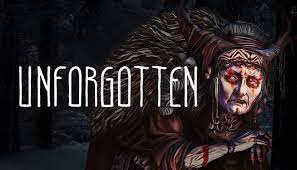 Thank You MV Games for providing us with a review code!

One thing that makes Unforgotten stand out from other adventure titles is the method of storytelling. Even though the plot takes place within a strange village in a cold winter, the entire story is told through cards. You flip through cards to progress and swiping left or right on certain dialogue makes choices that can move the story in different directions.

Oleg and Rusalina are driving in the snowy wilderness when suddenly the two narrowly avoid a deer. As their car is stuck in the snow, Oleg walks along the path or into the forest to find some help. He then instantly finds himself inside a house, having no recollection of how he got there. His phone has no signal and Rusalina is nowhere to be found. He comes across a strange old woman, a burly man named Egor, and a woman called Anastasia. Despite their hospitality, the characters are mysterious and speak in riddles, leaving Oleg pretty frustrated as he wants to leave and find Rusalina. As Oleg is wrapped in accomplishing tasks for Egor, he soon finds himself too deep into a situation he soon learns to regret.

You either use your mouse to swipe the cards left and right, or the arrow keys on your keyboard. Very simple and easy-to-understand controls. Every once in a while, there’s a “quick-time event” but instead of pressing the direction displayed on screen (because there is none),  you have to read what the card is saying and then press the appropriate direction. It’s surprisingly engaging for something basic. Depending on your choices, these will increase or decrease the three meters on your left-hand side—referring to villagers, reindeer, and girl. Villagers is pretty self-explanatory. If you do things that please or upset the villagers, it’ll increase or decrease the meter. Reindeer and girl refer to two specific unique characters who are part of the village (of sorts).  They take a slight bit more effort than just simply being a yes man to them. 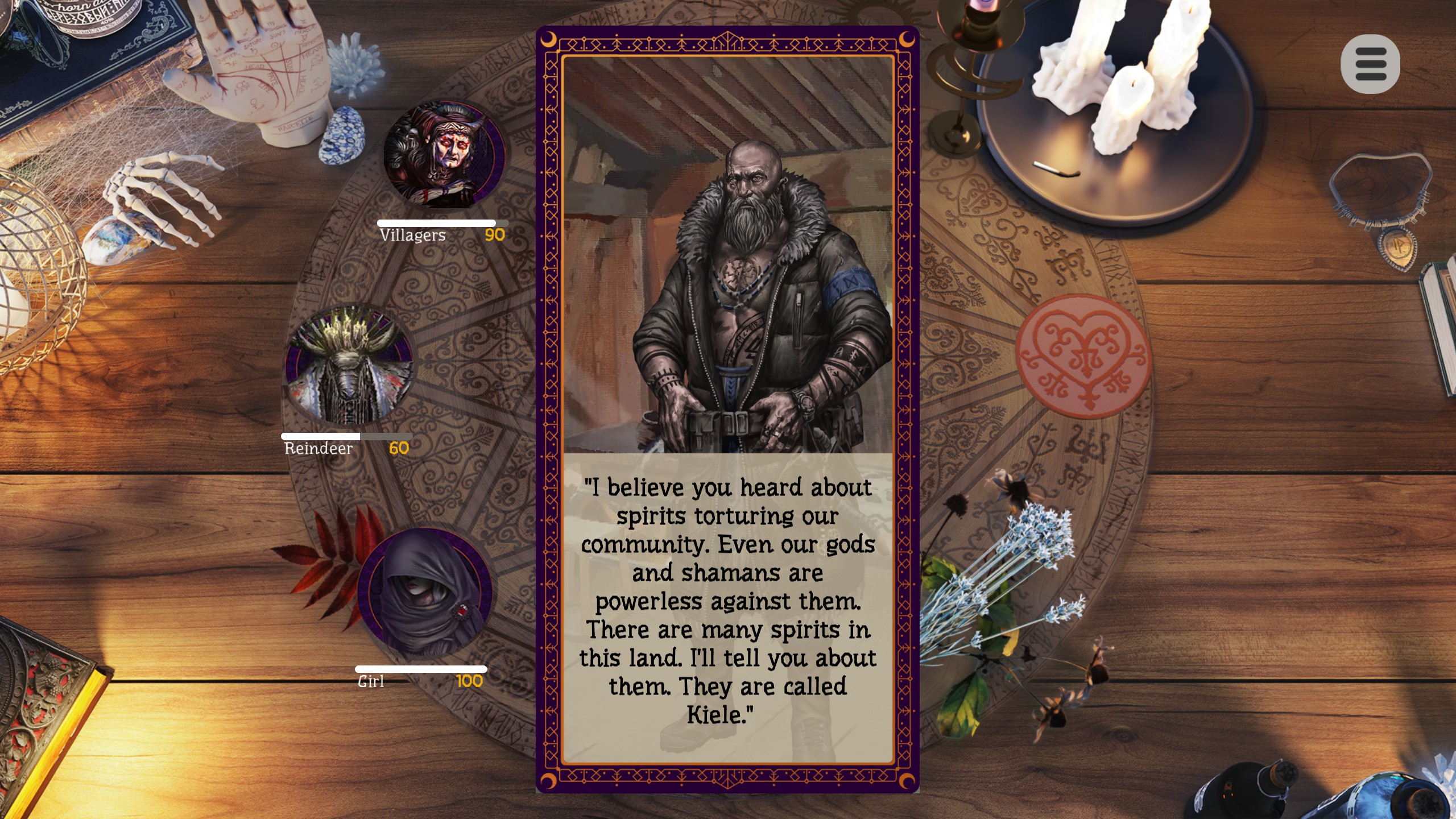 All of the visuals of Unforgotten take place on a table with various ritualistic goods on them, while the cards display the environments Oleg walks through. Depending on his actions, items will appear and disappear on the table, small bits of snow will start falling, or the heart on the right-hand side will increase or decrease accompanying a deep heartbeat. With how limited the visuals are, I’m impressed on how good the visuals manage to portray everything. I love the way the cards are used as it feels like it leaves you with anticipation with every card swiped away. The ambient music and sound effects further enhance this experience for me.

Given the names, and the setting, Unforgotten was made with Slavic folklore in mind, and thus was not originally made in English. The translation (from what I can tell) was done well considering how different Germanic and Slavic languages are. However, there still exists some minor slip-ups. A few words are spelled wrong or used in the wrong context such as “quite game” for “quit game” (I mean, it’s technically correct) and there are some formatting issues such as a sentence meaning to be bold and it isn’t, or an entire card missing dialogue. It’s not that big of a deal all things considered as the plot is still understandable. 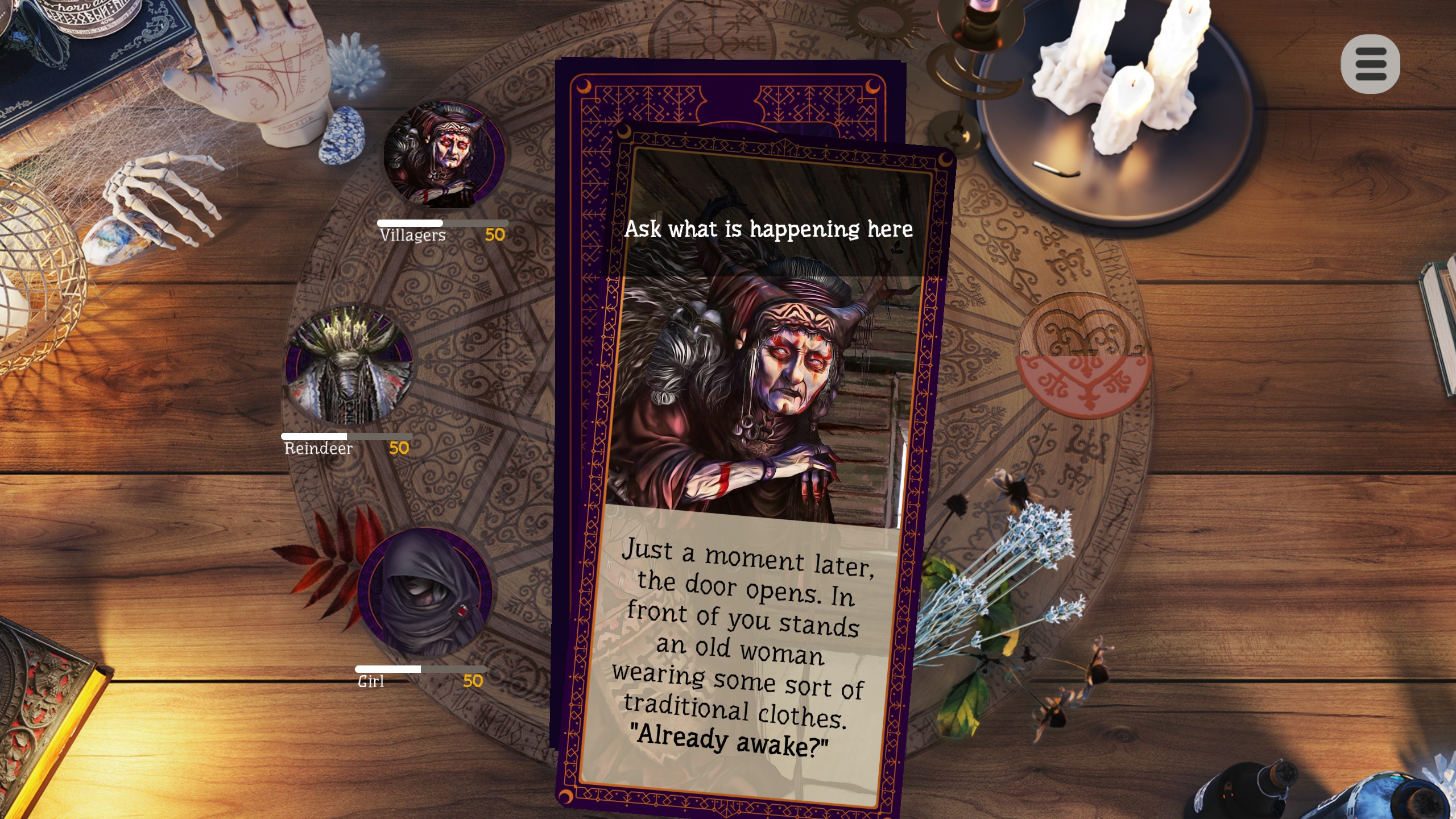 While Unforgotten is mostly displayed through cards, there is quite a bit of violence and blood displayed throughout. Sometimes if Oleg gets hit by another character, blood will be displayed on the card itself. The man he has to fight for the climax of the story is descriptively violent. Depending on choices made, said man can be killed or spared. While Slavic folklore plays a prominent role in the story, it never pinpoints a specific god or group of individuals. It leaves it just vague enough that it can encompass a wide range of Northern Slavic ideologies. Even so, there are shamans, fortune tellers, ritual sacrifices, and from what I can tell an inverted pentagram written in blood. Oleg at one point describes the area as “a godforsaken place”, and considering how crazy these villagers get, he would be right on the nose on that assessment. Language mostly consists of a few “d*mns” and “b*st*rds”. The acronym “WTF” is also used once.

Unforgotten is a pretty short experience—taking around an hour or 90 minutes to get to the end. Some replayability exists with getting the other paths and endings. The narrative is solid and easily got me engaged. Although, the ending or endings may upset people. Morally, there are a lot of Slavic references, violence, and language to keep in mind. For the price that the developer and publisher charge you, it’s an interesting way to look at another culture.