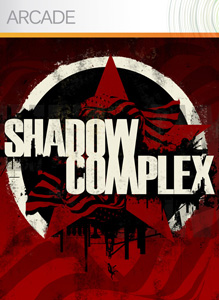 Have you heard of Shadow Complex? If not, you\'re missing out. I\'m not usually one to give away the ending, but I\'m making an exception for Shadow Complex. If you have an Xbox 360 and internet access, Shadow Complex is easily one of the best uses of $15 bucks you could spend on a video game. But if you were looking for a fanboy\'s praise for a game, you would have looked elsewhere. Instead, a fair and proper review seems in order, so let\'s get right to it.

First things first, Shadow Complex is in every respect what many gamers would call "metroidvania adventure" set against a backdrop of political conspiracy based on Orson Scott Card\'s novel, Empire. If you\'ve ever played a 2D entry in the Metroid or Castlevania game series, then you know what to expect from a metroidvania game design. But I\'ll go ahead and assume for the sake of explanation that you are not particularly familiar with either series and unpack the design a little bit. 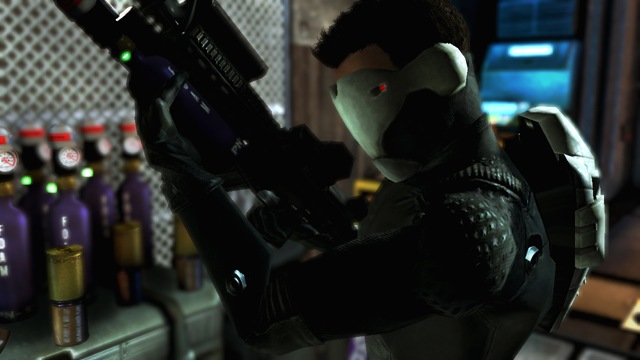 The gameplay in Shadow Complex is fairly straightforward in design: work your way through a maze of rooms with subtle puzzles to put a stop to a great evil, acquiring a host of tools to make your work easier along the way. While the concept is straightforward, the actual gameplay is nowhere near as linear. The complex (pun unavoidable) that serves as the game world is deep and complicated. New upgrades open new paths. Areas that were closed off at the beginning of the game end up a necessary path to a given goal later in the game. A lot of backtracking can take place, but a detailed in-game map makes the necessary path clear, and the execution is enjoyable in the name of exploration.

The game is designed to reflect classic 2D platforming designs. The emphasis on exploration is evident in the twisting corridors, the hidden pathways, and the items that are just out of reach at first. Thankfully, in addition to a host of explosive items to help clear paths, you are equipped with a flashlight that reveals destructible objects in a color-coded highlighting, each color representing which tool is needed to clear the way.

Your toolset starts small, with nothing more than a pistol and a flashlight, but you eventually gain a considerable array of tools. Some of these upgrades are offensive, including grenades and missiles, while others are strictly useful for exploration, such as jump boosters and a mask that allows you to breathe underwater. To give depth to the game, it is necessary to use multiple tools in conjunction with each other to reach a hidden area or bring down particularly nasty opponents. This is particularly good since the run and gun combat of shooting standard infantry could easily grow stale. Thankfully, the combat varies with the circumstance, and it is very common to have to think before shooting when entering a room for the first time lest enemies take advantage of their surroundings better than you.

And it makes sense that the enemies would have the upper hand, seeing as you are the one invading their hidden facility. As mentioned earlier, Shadow Complex is set in the world of Orson Scott Card\'s novel, Empire. In the game, you play as Jason Flemming, the son of a prior government agent who refused to take up his father\'s profession. While out on a date with your girlfriend, Claire, in the wilderness of the Pacific Northwest, she is kidnapped by agents of a militaristic group intent on overthrowing the US government (as strongly hinted at in the game\'s opening sequence involving the assassination of the vice president). While the premise suits the gameplay perfectly, and the setting and characters are good, the narrative aspects of Shadow Complex are not on par with the novel it is based on. 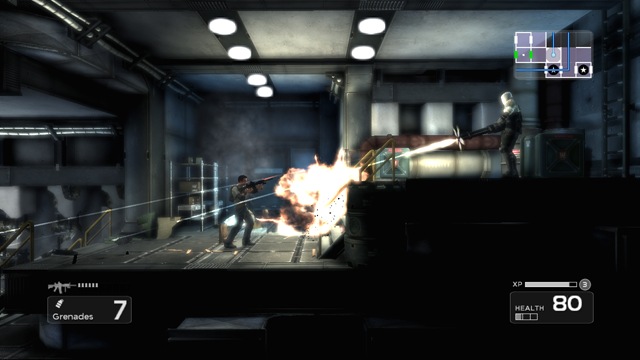 For better or worse, the gameplay does not hinge on the narrative, so the somewhat sparse narration is permissible. Pleasantly, this is Shadow Complex\'s greatest flaw. Overall production qualities are positively exceptional. The graphics are nothing short of wowing. It\'s unsurprising to find that the game uses the Unreal 3 engine in light of this, but it\'s easy to be taken aback by the fact that the graphics here are better than a great number of retail games. The models are detailed and fluid. Explosion and other effects are quite solid, but the use of lighting and screen filters is very impressive. There is no slacking in the audio department, either. Sound effects, voice overs, the works; they all come into play quite well. The soundtrack is not particularly memorable, but it remains solid.

The game even fares better than most in the realm of moral matters. Countless insurgents (which are fully armed and armored) are killed in self-defense, but blood and gore is left out entirely. Pleasantly enough, Jason is presented as someone who fights because he has to, not because he wants to. An early cinematic reveals this as he turns down his father\'s advice to become an agent. Nevertheless, many are killed by gunfire and explosions. There is nothing to say about sexual or occult material as it is entirely non-existent. There are a few, fairly minor, profanities used in the narrative. The worst is a single use of "ba----d," but a couple uses of "hell" and "d--n" make their way into the game, too. On the positive side, the narrative shows that violence should be a last-resort measure; it also promotes selflessness to the point of sacrifice for loved ones and country.

When all is said and done, this exceptionally well-made game (derivative as it may be in many places) is easy to recommend to most people. Only to those put off by the violence and few profanities would I hesitate to recommend Shadow Complex. But for just about any other gamer, this is not a game to be missed. The blend of action and adventure comes together perfectly with a pacing that makes the next goal urgent while still allowing you explore every nook and cranny (and doing so yields great rewards) your gear will permit you to. The game even includes some time trial missions for extra play time, not that you\'ll be done with the game simply because you beat it once. Hands down, this is not only the best game on Xbox Live Marketplace, but it also holds its own against a host of retail games, and it is worth every last penny.