Thank you Gamers Gate for giving us this game to review!

Kaptain Brawe is a 19th century space police officer who travels the galaxy protecting people from space pirates (”kribbs”).  Accompanying him on the ship is his ensign Kralek and his broken down robot “Rowboat”. All is quiet until a distress call is intercepted by a nearby planet. The glory seeking Brawe wants to handle this without any backup and his ensign begrudgingly complies. The adventure begins with finding the coordinates of this crashed ship and repairing Rowboat on the way to the new planet.

Like many adventure games you have to explore your surroundings and look for clues and objects that may come in handy. The mouse cursor will change when you can interact with an object or move to another area. There is a question mark icon on the lower right hand side that will show you all of the available hot spots on the screen.

Moral Warnings: Some language and a character has gender confusion.

Talking to everyone is vital since they often have information you need. Some people require buttering up before you get anything useful out of them. When you have multiple people in your party, you can switch characters.  Conversations vary depending on which character you are playing. Each character has a separate inventory and unique abilities. For example, most people have enough common sense to not pick up unknown radioactive items. Kaptain Brawe, on the other hand, will pick up anything that looks neat.

Once an item is in your inventory you can examine it, interact with it, or combine it with another item. Some item combinations make sense but other puzzles will leave you scratching your head. Depending on the difficulty you select, you can get some hints to point you in the right direction. If you\'re like me, even those aren\'t enough. Fortunately, I was able to find some nice walkthroughs online. 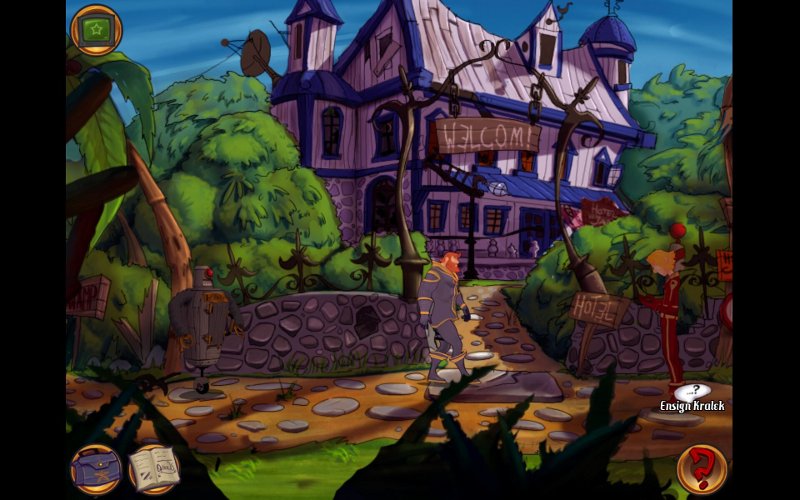 One of the puzzles involved finding and baking a native flower that will make the consumer "mellow". Another quest literally involved grave robbing. At least it had the decency to censor the screen as Brawe took what he needed from the coffin. Other appropriateness issues include a couple of instances of swearing and one character has a case of gender confusion. I won\'t say any more since it would spoil the main story line.

Kaptain Brawe: A Brawe New World only took me a few hours to beat which is rather short considering the twenty-dollar price tag. Another disappointment was the complete and utter lack of voice acting. Yes, there are sound effects and the background music is good but this game could have been so much better with voices. If they were aiming for a retro look and feel, they succeeded! I felt like I was playing a game from the early 90\'s.

While this game shares some similarities with the humor and artwork of Monkey Island, I find that it definitely falls short. I cracked a smile every now and then but that\'s it. If you\'re looking for a Monkey Island caliber game, look elsewhere. Other than Brawe being portrayed as a moron, there\'s not much character development. Again, voice acting would have helped here. Kaptain Brawe is available on PC, Mac and soon on the iPhone. There is a demo available if you want to give it a go.