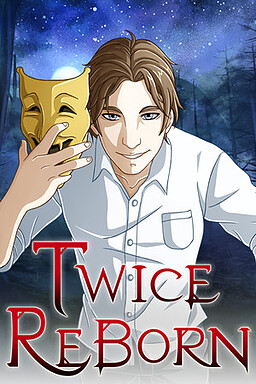 Thank You First Step Cinematics for providing us with a review code!

Twice Reborn is one of the few games that I have played that takes the whole folklore surrounding vampires and explores the concept beyond the simple romanticization most do. That is what interested me most about this particular product. It is a visual novel surrounding the themes of vampires, with a college student by the name of Mark being forced into the world of the undead.

Mark is in his final year of college, preparing to get a job recommended by his Professor, Steve Michelson. He also plans to make his last year very memorable as he wants to party hard at his last sorority party. Little did Mark know that his last year would be one to remember but not for the reasons he expected. As he is stalked by a vampire named Shock, Professor Michelson comes to Mark’s aid by killing Shock, while revealing that he is an Enforcer. An Enforcer’s job is to uphold the moral standards of vampire kind. Any vampire that steps out of line is swiftly taken care of. It turns out that Michelson also had his eyes on Mark too and planned to integrate him into the Society of the Arts, a group of vampires who support their vampire activities with the arts, and also attempt to hold some form of law and order within vampire society. Shock was part of the House of Skulls, who are the outlaws of the vampire society. Because of untimely circumstances, Mark is then forced to become a vampire as a means of protection from the Skulls, so now he is being influenced by the Society, the Skulls, and his fleeting humanity to make major choices in his life.

Like many visual novels, Twice Reborn has a lot of choices to be made through two or more pieces of dialogue. Some choices are simply flavor text and others make substantial differences. Mark must juggle multiple meters in a menu that can be accessed at any time. Interacting and making the right choices with Michelson, for example, will raise the meter for Enforcer, leading him to the path of the Enforcer. Interacting with the “leader” of the Skulls, Dameon, will increase it for the House of Skulls. The choices made can lead a person to many endings that are labeled: good, normal, bad, and dead. Most endings are pretty easy to get, and some can be tricky as they require specific decisions made as well as certain meters being high enough. The bad and dead endings are probably the easiest ones to get as they are usually the most egregiously stupid decisions that can be made at that point in time—typically leading to an immediate bad or dead end. 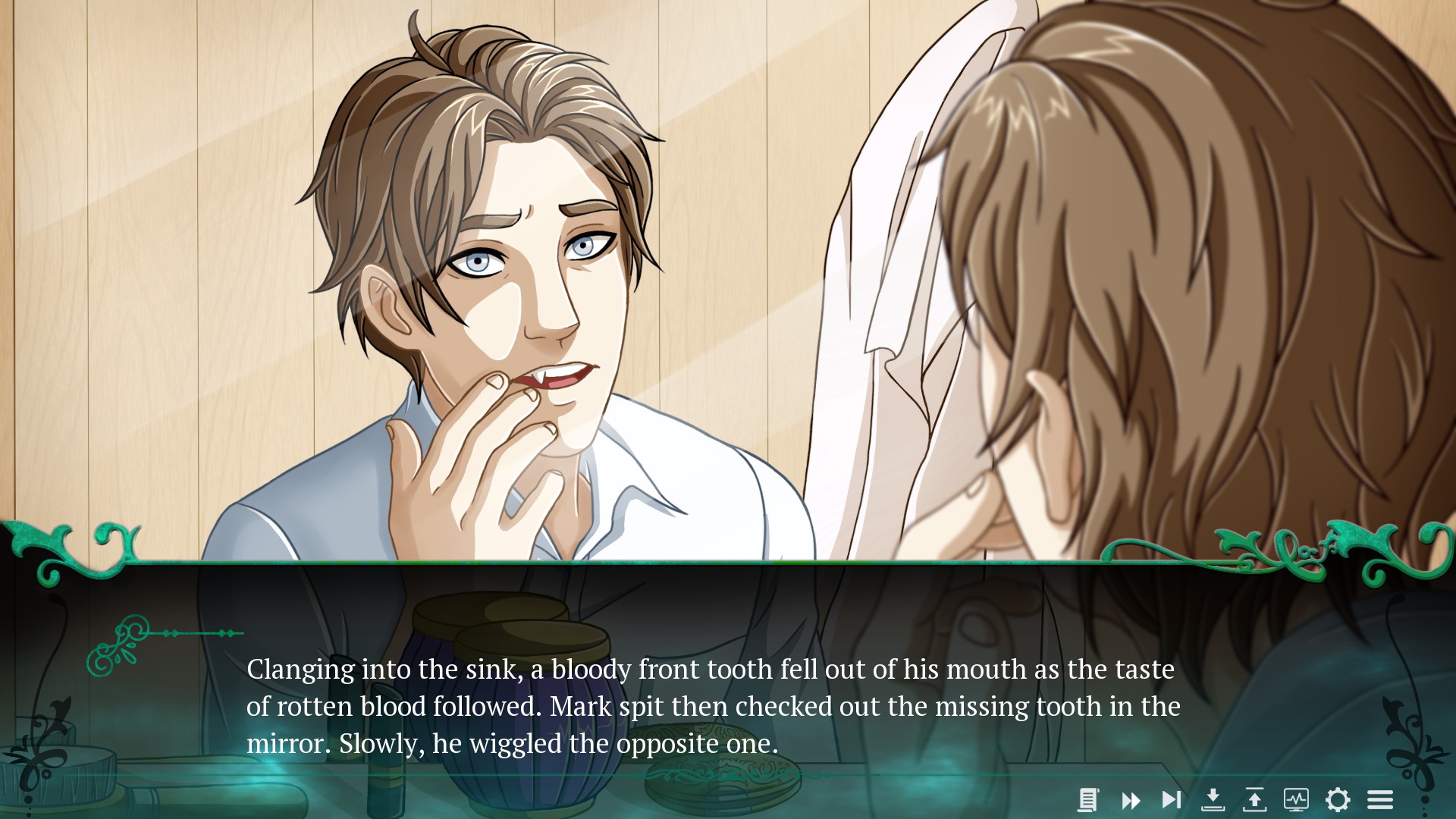 There are also other meters pertaining to certain minor and major characters that can have an influence on the mentioned paths. Special endings labeled bloodlust are unique endings that happen when Mark fails to sate his appetite. There are numerous chances to drink blood and not drinking enough blood throughout the story can lead to said endings.


With the two main forces that Mark interacts with, Michelson and Dameon, there’s a good sense of mystery with both characters so you never really know who to fully trust. Michelson may be a more lawful individual, but he’s also a manipulative person. Dameon may lean towards chaos, but he’s more reasonable than he lets on. Neither character is wholly “good” or “evil”. It leaves the player just as skeptical of the whole situation as Mark is through the narrative.

I very much enjoy the fact that Twice Reborn explores the religious aspects of vampires and incorporates them into the narrative. As most may know, vampires are considered undead creatures, typically when a person sells their soul and drops their faith. They’re weak to holy water, avoid buildings where faith is practiced, and have an aversion to garlic. While Mark throughout the game identifies himself as agnostic, when he realizes that his soul is potentially damned, he can make the choice to walk the path of humanity and attempt to reclaim it. Although, with Mark’s upbringing (his mom died of cancer and his relationship with his dad is terrible), it makes narrative sense as to why he would be drawn to the world of vampires.

At first, I wasn’t impressed with the art style. It looked weird to me. I did start to warm up to it a little after a while due to the expressions that the characters make. During the more dynamic scenes, the character portraits even move around for a sense of immersion. It’s a pretty colorful style in contrast to the overall tone of Twice Reborn. There are strange perspectives in the art every once in a while, but I would never say it was ever bad. 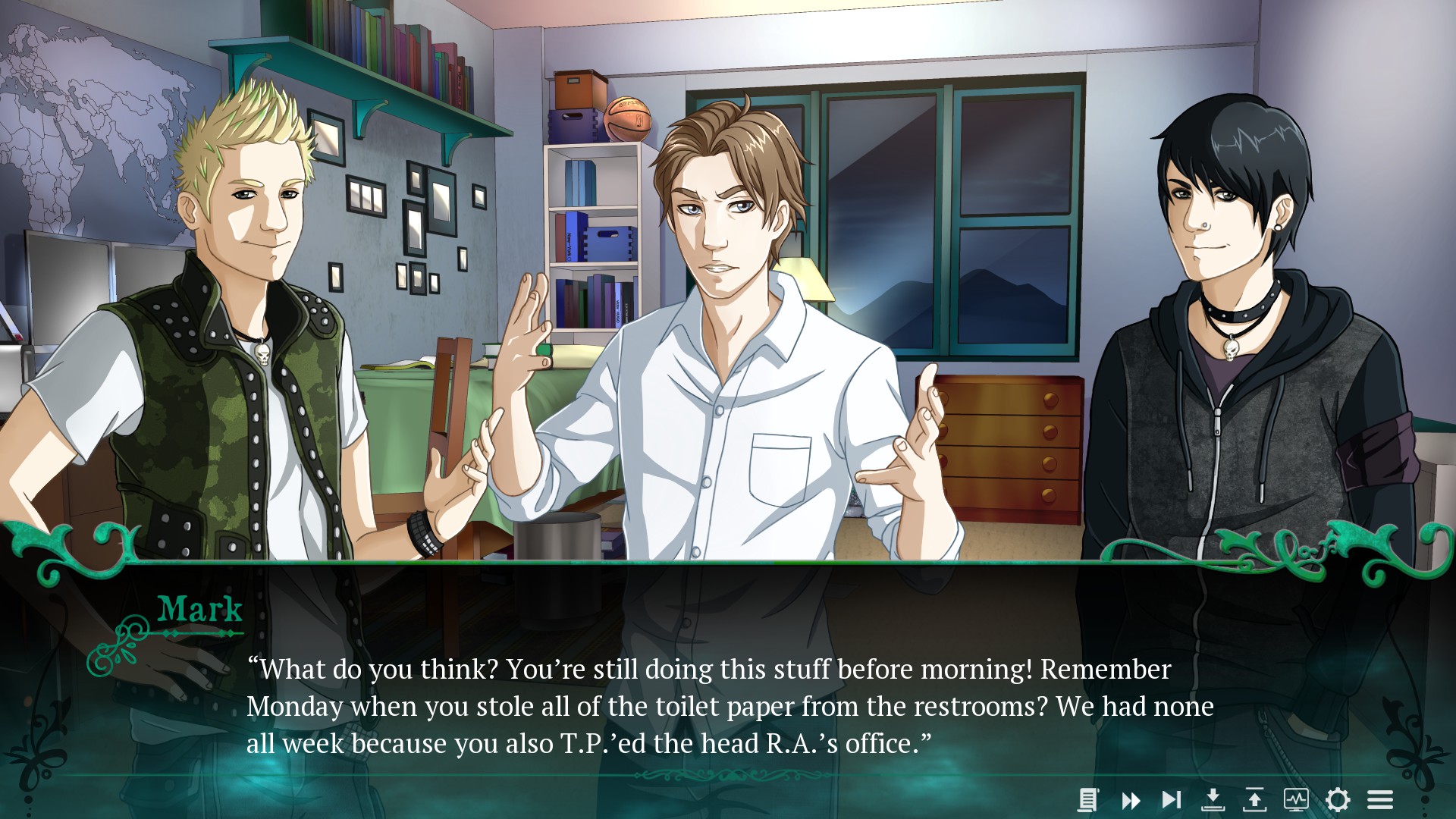 One thing that surprised me is that every character is voiced (in English). Many of the visual novels that I have reviewed tend to skip out on voice acting as it can get expensive. Every character that plays a role is voiced. Now while I don’t think any of the voices are outright bad (except for maybe one, but they are such a minor character that it doesn’t matter), there is some inconsistency with the sound as well as clear differences in mic quality for some characters. There are many scenes where characters sound too low or too high with the music making it hard to hear some lines, even when I have the voices on a setting louder than the others. I do think the actors get more comfortable in their roles as the plot progresses as in the beginning there was some flat delivery where more emotion should have been present.

As with the setting of vampires, there is of course blood present. Some scenes can get rather bloody but not intensely so. Some scenes show a few characters being cut up or stabbed. Any scene that would be graphic instead uses a splash screen with blood on a black background. Murder can happen, but usually, any murder committed by Mark is met with a bad or dead ending, as previously mentioned. Language mostly consists of words such as “b*st*rd” “sh*t” and “A-hole.” The worst in regards to sexual content is one scene with a girl in a short silk black dress with a small amount of cleavage showing. One moment with a vampire named Cloud references marijuana as he likes to suck the blood of drug users to experience a similar high. Any time that Mark would act like a pervert in a choice or cheat (which there are only a couple) is met with immediate rebuke or consequences. In regards to the supernatural, only vampires are present. Twice Reborn is mostly grounded so there are no ghosts, zombies, or occult present. With ethical choices made, Mark can make bad decisions. These decisions are usually discouraged as they lead to undesirable endings.

Twice Reborn is a pretty interesting visual novel. Even though the graphics and the sound direction aren’t amazing, I found myself pulled into the story, characters, and plot. Although there were two moments where the narrative got confused and mentioned a character they assumed I interacted with, I liked how everything was presented, making for a solid story. In regards to morality, (very) bad decisions can be made, but are discouraged to do so as they end with either Mark dying or feeling very dissatisfied with himself. On the other hand, the best ending Mark can get is one where he finds his faith in God, embraces humanity and lives his happiest life is very noble while wrapping up most plot points. While I haven’t achieved every ending out there, it took me around 8 hours to see what the developers note as the true ending. If $20 seems a bit expensive, I’ve also seen it go down as low as 40% of the original price and is worth checking out if you enjoy stories with vampires.