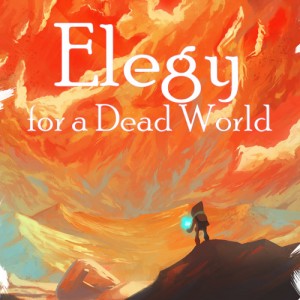 Thank you, Snowrunner Productions, for providing a review copy of the game!

I had just finished National Novel Writing Month for the fifth time when I was approached with this game. It's a game all about writing, so who better to give it a spin than an aspiring writer?

The premise of the game is exceedingly simple. You control a character that seems to be some sort of space explorer. You can land on one of three planets and write about what you see. Once your explorations are finished, you can submit your report and others can offer “commendations” on it.

The game really doesn't get much more complicated than that. You move back and forth along a two-dimensional landscape, and can use a jetpack to fly. This isn't really necessary, though, as there are no platforms to land on, and the one place where there is a fence to fly over, the jetpack won't let you do so. A feather pen at the bottom of the screen indicates an area where you can add to the story. Simply press the tab key to open a screen to write what you would like, or edit the already existing text. In addition to the feather pens, arrows can appear along the bottom of the screen to indicate where a doorway or stairway appears in order to explore other sections of the apparently abandoned worlds. The game worlds are extremely short, with only about six or seven different scenes to explore. There are no enemies to fight or other people to talk to – it's just your character and a few colorful pictures. 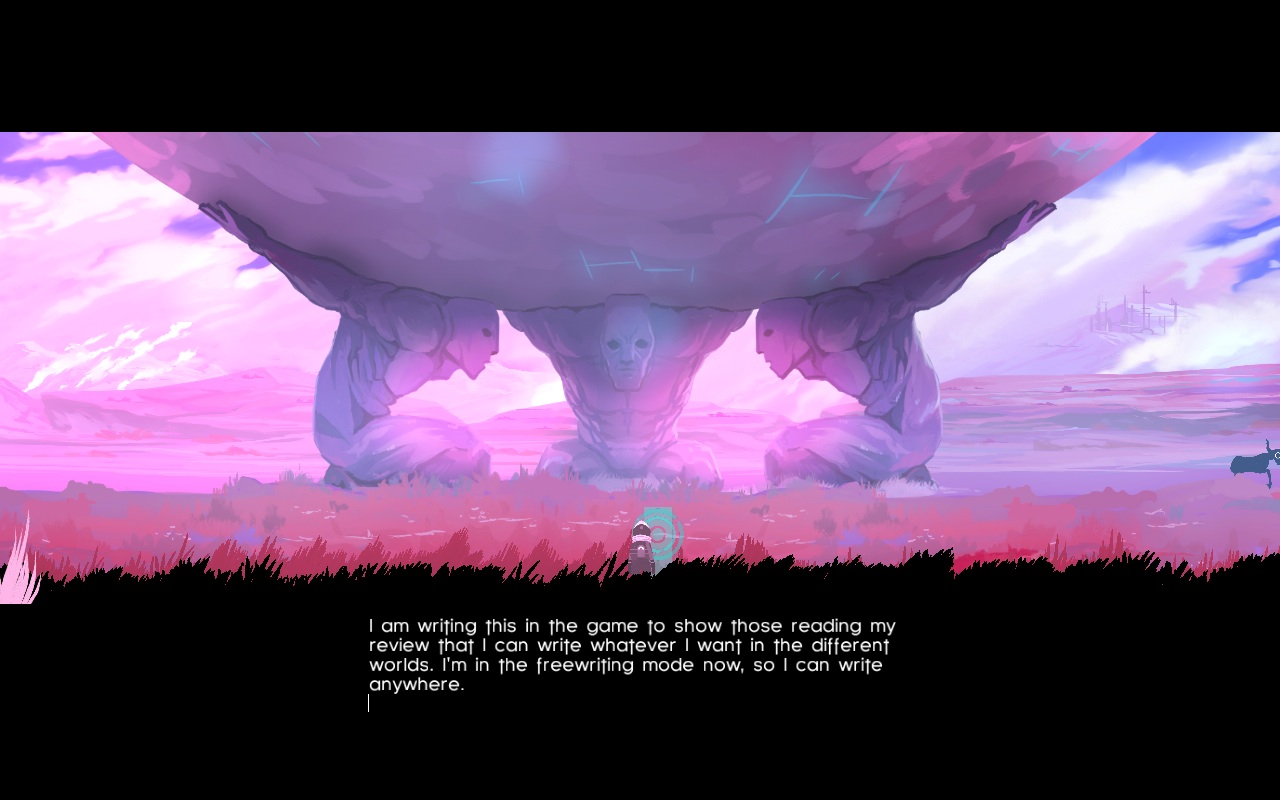 Strong Points: An inspirational way to come up with some short stories
Weak Points: Very little substance; as a game, provides no challenge
Moral Warnings: Some minor swear words; works by other users can contain objectionable content

Your character begins by floating in a mysterious void, and you can use the arrow keys to fly to different worlds. There are three worlds to explore, each one named after – and inspired by – an English poet. The worlds seem to be based off loose interpretations of three famous poems - “Ozymandias” by Percy Bysshe Shelley, “When I Have Fears That I May Cease To Be” by John Keats, and “Darkness” by Lord Byron. When a world is selected, you can choose from a list of different writing prompts to follow, which includes a blank “freewriting” option, an attempt to recreate the famous poems which inspired the worlds, or a grammatical exercise where you can attempt to correct the grammatical errors from a previous “traveler.” Although these last two options are intriguing, they fall somewhat short as their doesn't seem to be an in-game way to indicate if your efforts are completely successful. In other words, if you correct the grammar of one sentence, you don't receive any indication that your edits are, in fact, grammatically correct. In some respects, Elegy for a Dead World is less a game, and more of a toy or tool to explore and play with writing and grammar, in much the same way that Wii Music allows the player to experiment with music. There is no challenge, no ultimate goals, and except for commendations, no score. But more on commendations in a bit.

The game world appears to be some form of watercolor paintings, and successfully convey a feeling of loneliness, mystery and loss all at the same time, with a couple instances of horror thrown in for good measure. The background music and sound effects help to add to the atmosphere nicely. Sound effects are exceedingly minimal, but largely unnecessary anyway. I found it a bit odd, though, that my computer's CPU fans felt the need to fire up when running the game – something that typically only happens when I'm running extremely graphic-intensive programs or games. This really didn't lead to any problems in terms of performance, but it did strike me as odd, and possibly a sign of poor resource management – at least for the Macintosh operating systems. Windows and Linux users may have a different experience. 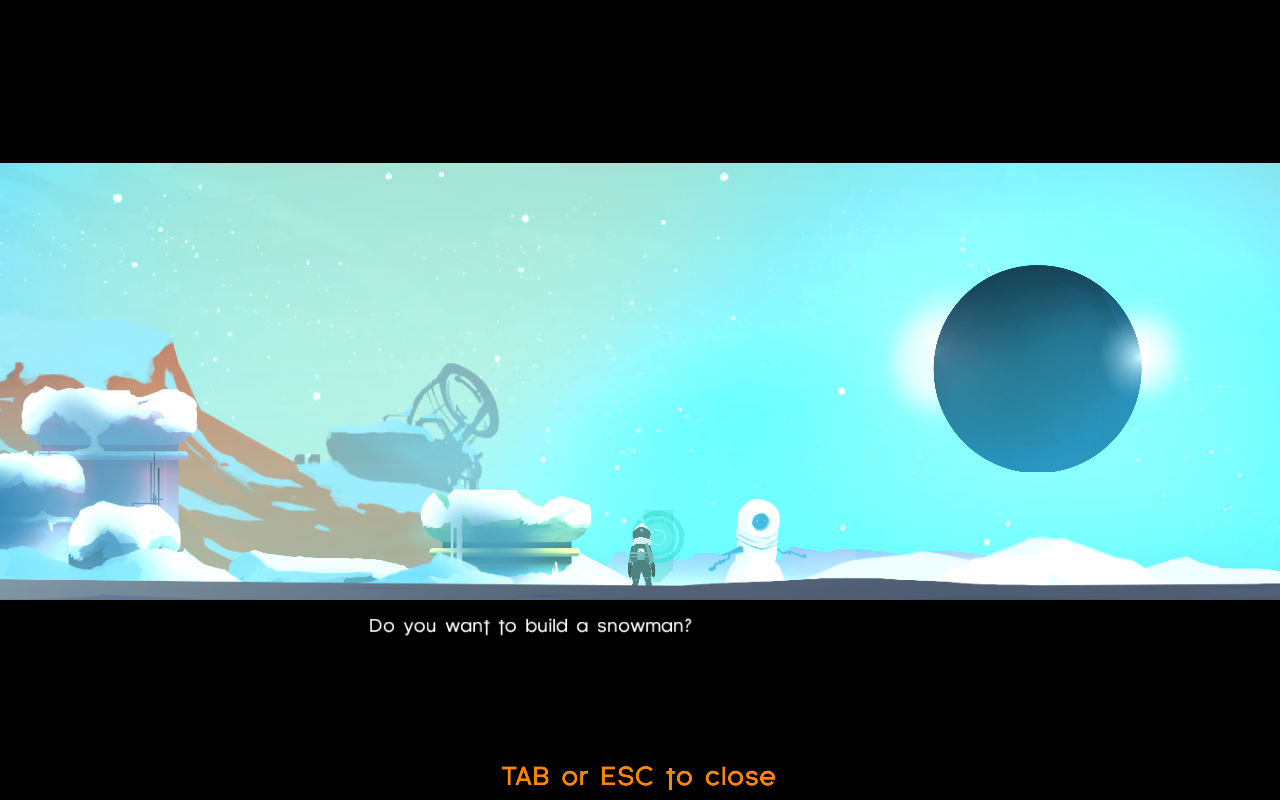 The game requires Steam to play, and this is likely due to the importance of “commendations” in order to gain the only three achievements in the game. When a player finishes a story, they can upload it into the Steam Workshop. Others who play the game can then read these stories and, if they like it, offer a “commendation” on the story. The three achievements are only unlocked if a player receives 1,000 commendations for one of the game's worlds. Although it is possible to play the game without having to upload your own stories or read the works of others, this is one of the elements of the game that makes it interesting – to see what others have thought about the different environments and the mysterious relics to be found.

In terms of moral concerns, there isn't too much in the actual game to worry about. Although some of the scenes can have a creepy feel to them, there certainly isn't anything horrific or gruesome about it (aside from the Popcannibal logo at the beginning of the game – a soda can with what appears to be blood coming from jagged metal teeth). However, the same can't be said from some of the stories that others have written. Just as with any online game, you can expect to find some rather salty language and questionable scenes that others have written. It's certainly one of the elements that anyone has to worry about with online games, and Elegy for a Dead World is certainly no exception.

All in all, Elegy is an interesting concept. However, there is virtually no challenge if looked at in terms of a game. It can be a useful writing tool, especially if someone is looking for inspiration or an excuse to freewrite, or if they simply want to write a story and publish it to a severely limited audience. But even then, there is extremely little substance, and not much of a reason to explore these dead worlds.