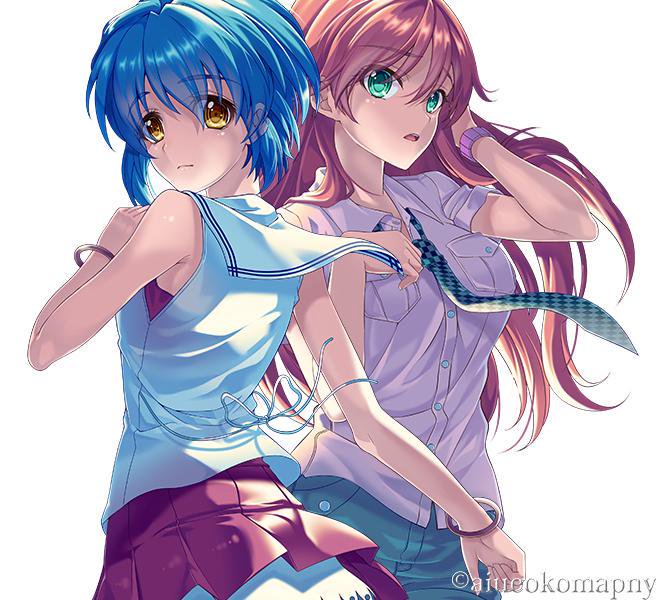 Thank you Sekai Project for sending us a copy of this game to review!

Not too many video games have made me cry, but this is one of them.  Sound of Drop – fall into poison – is a visual novel that puts you into the shoes of a shy school girl named Mayumi.  Her only friend, Himeno, tells her about the ghost stories surrounding the Manten Aquarium where people are said to disappear into tanks full of blood red water on nights with a full moon.  Mayumi is well aware of the stories as she lost her younger sister in that aquarium five years ago.  She doesn’t tell Himeno right away and begrudgingly agrees to accompany her to the museum on the next full moon.

The trip to the museum goes well and there are several pages of well written dialogue to read through as it sets the scene and adds some background information of the two main characters.  Progressing the dialogue can be done with the mouse scroll wheel or left clicking.  Decision making isn’t required until Mayumi talks to a part-time employee at the museum, Hiyoshi.  The player can choose to be nice or a jerk to this guy. 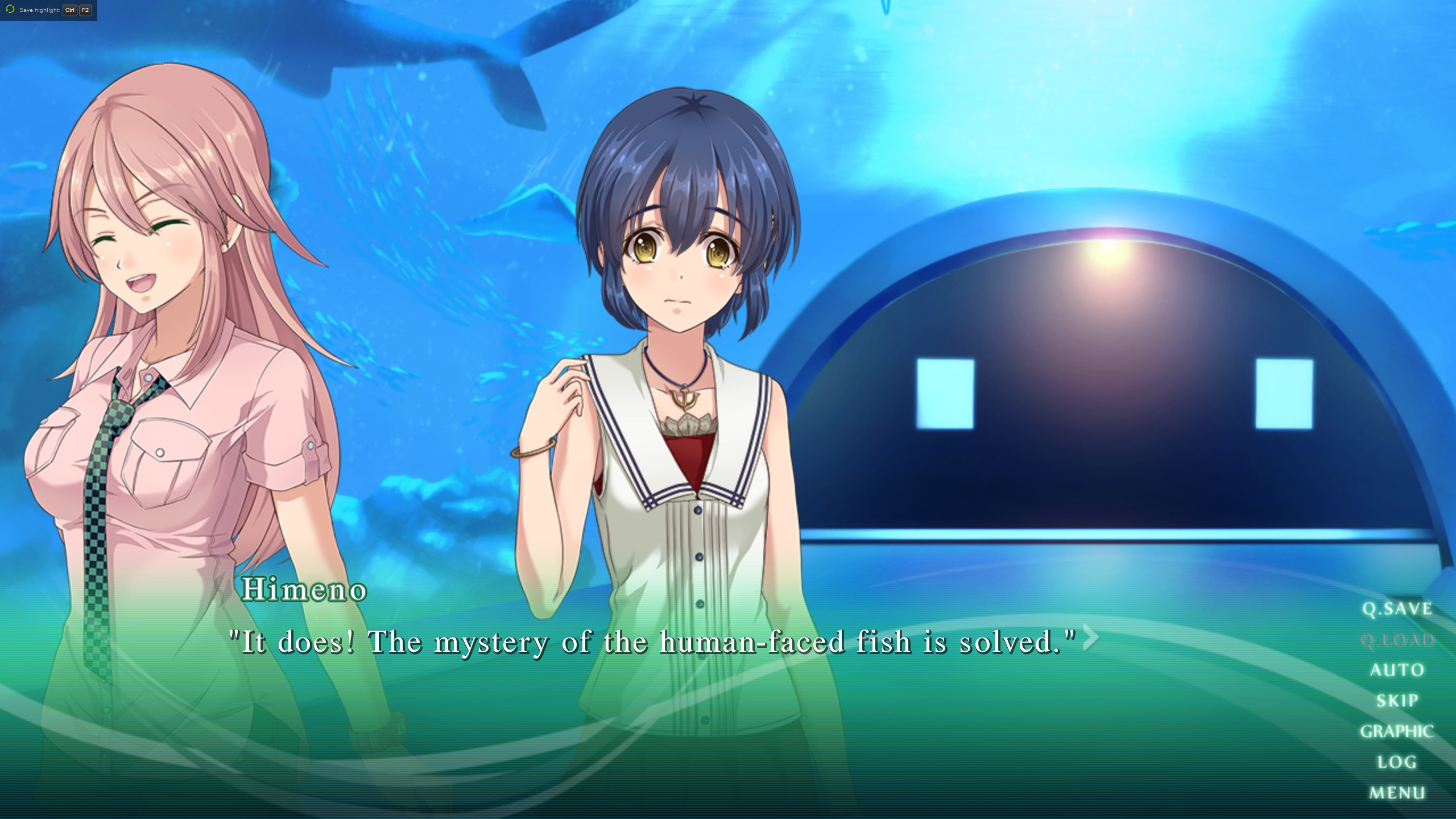 Strong Points: Great story and dialogue; colorful anime artwork
Weak Points: Can be beaten in less than an hour to get a bad ending, 2-3 hours to get a good ending; game crashed once
Moral Warnings: Some blood and  many ways to die; minor language; interacting with ghosts

Before making any decisions it’s a good idea to utilize the quick-save or a save slot from the game menu.  I like how you can save at the dialogue screen before supplying an answer.    Providing the incorrect answer will result in Mayumi’s or a friend’s death.  There are thirty-one possible endings and only four of them are good.  I have probably experienced about a dozen of the bad endings before getting the good (and touching) ending.

While there are Steam trading cards, I think achievements would have been funnier.  I would have loved to get an achievement for each of my fatal mistakes.  In my three and a half hours of game time I have managed to turn Mayumi into a jelly-fish, a meal for orca whales, and get her and her friend Hiyoshi beheaded.  Drowning and dying a slow death in the aquarium are possibilities too. 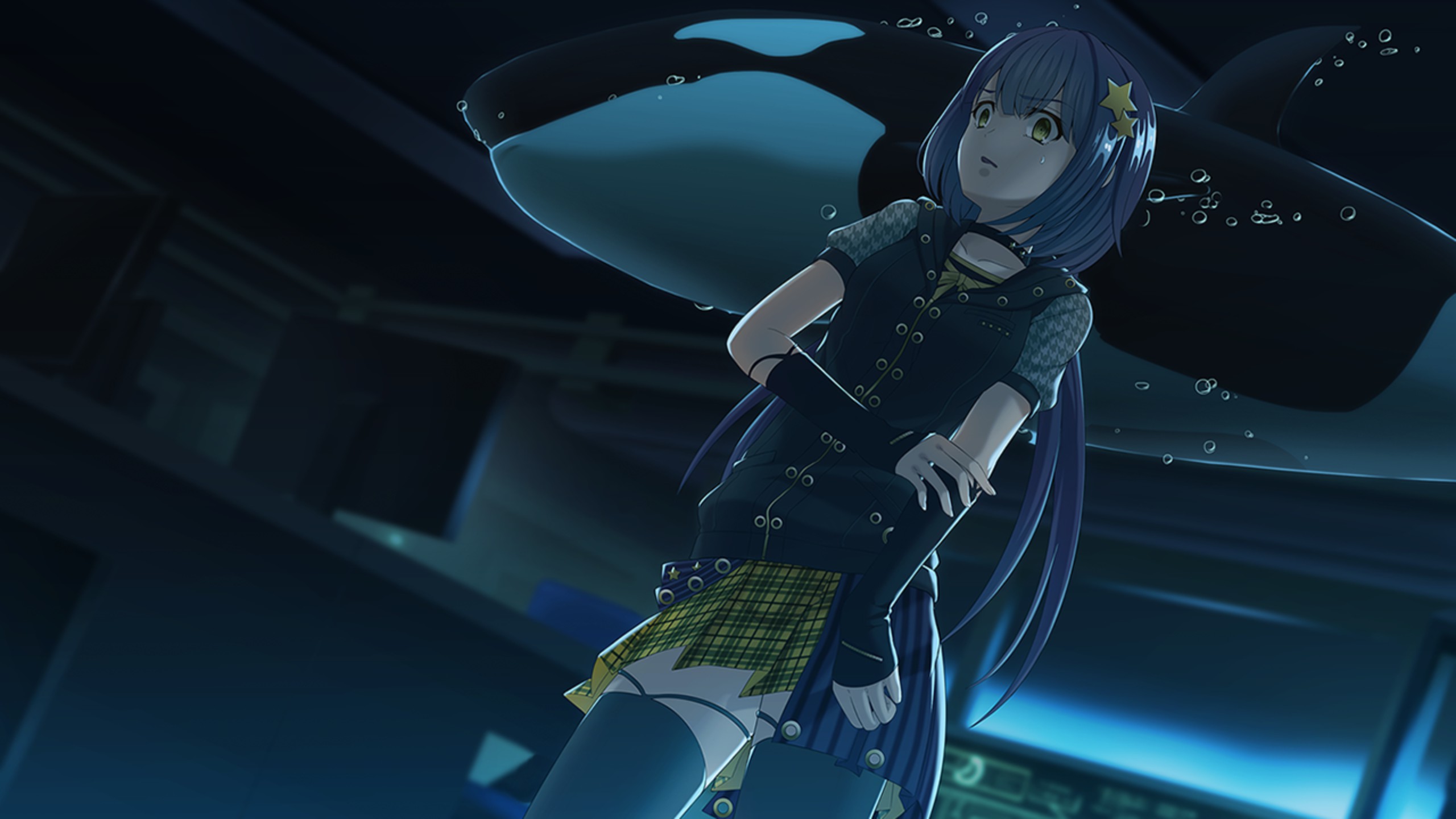 Some of the deaths can be rather gruesome and since this is a visual novel, they are described pretty well.  There is usually disturbing imagery to go along with it.  While the characters are drawn in an anime style that usually looks cute, there are images of them bleeding and coughing up worms.

Because of the haunted theme, I can see why this game is being released around Halloween.  There are interactions with ghosts and if the player doesn’t get herself killed, goes on to discovering the reason behind the hauntings and aides in helping the spirits cross over to the “other side.”   One last issue worth noting is that there is one instance of the word d*mn.

There isn’t any voice acting, but the background music and sound effects definitely add to the experience. When Mayumi’s life is hanging in the balance, the music is usually pretty tense. During normal conversations, the music is much calmer. When there was singing, it was in Japanese.

Sound of Drop – fall into poison – is a solid visual novel that kept me reloading my saves and striving for a good ending.  The skip function that fast forwards to dialogue choices is a nice feature too.  Unfortunately, it did crash to my desktop.  Other than that it ran great and I highly recommend picking up this game when it’s on sale.  The $12.99 price is reasonable, but the game will only take about three hours to complete.