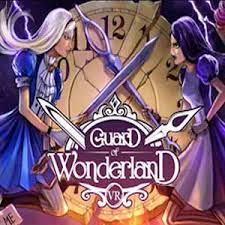 Thank You Wonder Games for providing us with a review code!

Lewis Carroll’s Alice’s Adventures in Wonderland remains to be such an inspirational piece of literature that people all over the world continue to reference it or take large inspiration from it. Wonder Games will not be the last ones to put their visual novel spin on the classic tale. Guard of Wonderland is a darker interpretation of the story, almost similar to American McGee’s Alice.

From the beginning, you’ll have the choice to choose between Alice or Alcie. Alice looks most similar to the Alice of literature but with the aesthetics of a guard or royalty. She is the titular Guard of Wonderland. Alcie, on the other hand, is a mysterious stranger with raven-colored hair and a more gothic approach to her design. Both of their objectives is to stop the evil queen, but each has a different approach to the subject, which causes them to clash at certain parts of the narrative. Whether Alice or Alcie is chosen, their stories are mostly similar with a few differences here and there, mostly pertaining to the characters they meet.

Many characters from the original work such as the Jabberwocky, Tweedledee and Tweedledum, the White Rabbit, and the Mad Hatter make an appearance. Even characters from other literary works show up such as Humpty Dumpty. Some of these characters have very little relevance in the plot. They typically show up, talk to Alice or Alcie, and then vanish from the narrative save one or two of them. Every character has a sharper and darker look in contrast to their more whimsical original design. Each character contains a nice amount of detail, and most have numerous expressions displayed in dialogue. Some designs wouldn’t even be out of place in a horror game. 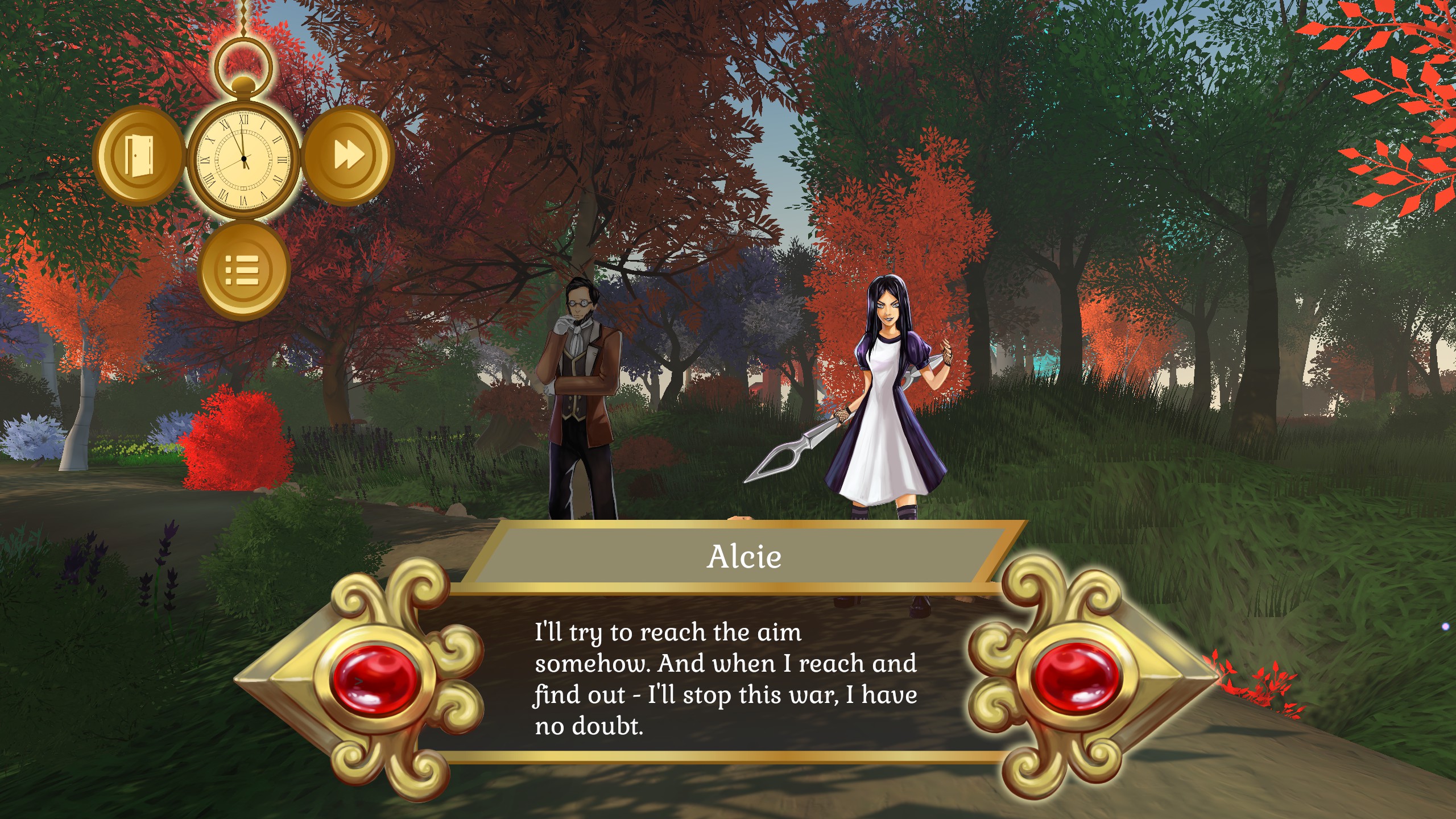 Strong Points: Nearly every line is done in verse; nice character designs
Weak Points: Gameplay loop is very monotonous; the two story paths only have minimal differences
Moral Warnings: Mild language such as “d*mn”; some character models show a bit of cleavage; small amounts of blood is present in a final scene

As Guard of Wonderland is mostly a standard port of the virtual reality version, many things such as very large text boxes and a strange field of view remain for this. It can feel awkward if you weren’t aware of the game’s origins. This also means that the backgrounds were meant for head tracking, so you’ll have to use the mouse to look around instead. The environment is okay, but standard as the scenery doesn’t change all that much from “colorful forest”. Most things translated fine going from a VR to a standard PC format, but Guard of Wonderland was designed with VR in mind so one major aspect of that version feels very monotonous. (I think Guard of Wonderland is one of the earliest VR visual novels on Steam.) I think the port also messed with some settings as sometimes clicking the menu doesn’t work and there is no way to close the game while in progress without ALT+TAB and closing from the desktop.

Typically, visual novels have very few interactive gameplay elements. Some do have choices to be made, while others go the extra mile and have entire separate mechanics. Guard of Wonderland has a combat system tied to it. However, the gameplay of it is incredibly basic. After every scene, you’ll battle against some form of creature with two items to choose from. Choose the correct one, and you’ll deal damage to the enemy. Choose the wrong one and you’ll have a quick-time event (using A, S, or D) to dodge their incoming attack. You’ll also come across characters in the journey that have an attack that bypasses this, but you can only use them once per chapter. Most enemies take two hits to defeat, but some will take three, four, or five hits.

I’m sure a system like this was a lot more engaging and interesting in a VR setting, but I wasn’t impressed in the slightest using keyboard and mouse. Since there were only two choices to make, brute-forcing every encounter was effortless and the window for dodging attacks is so lenient that you’d have to not be paying attention at all to get hit. Since the loop is usually “talk, fight, talk, fight”, this got monotonous very quickly. 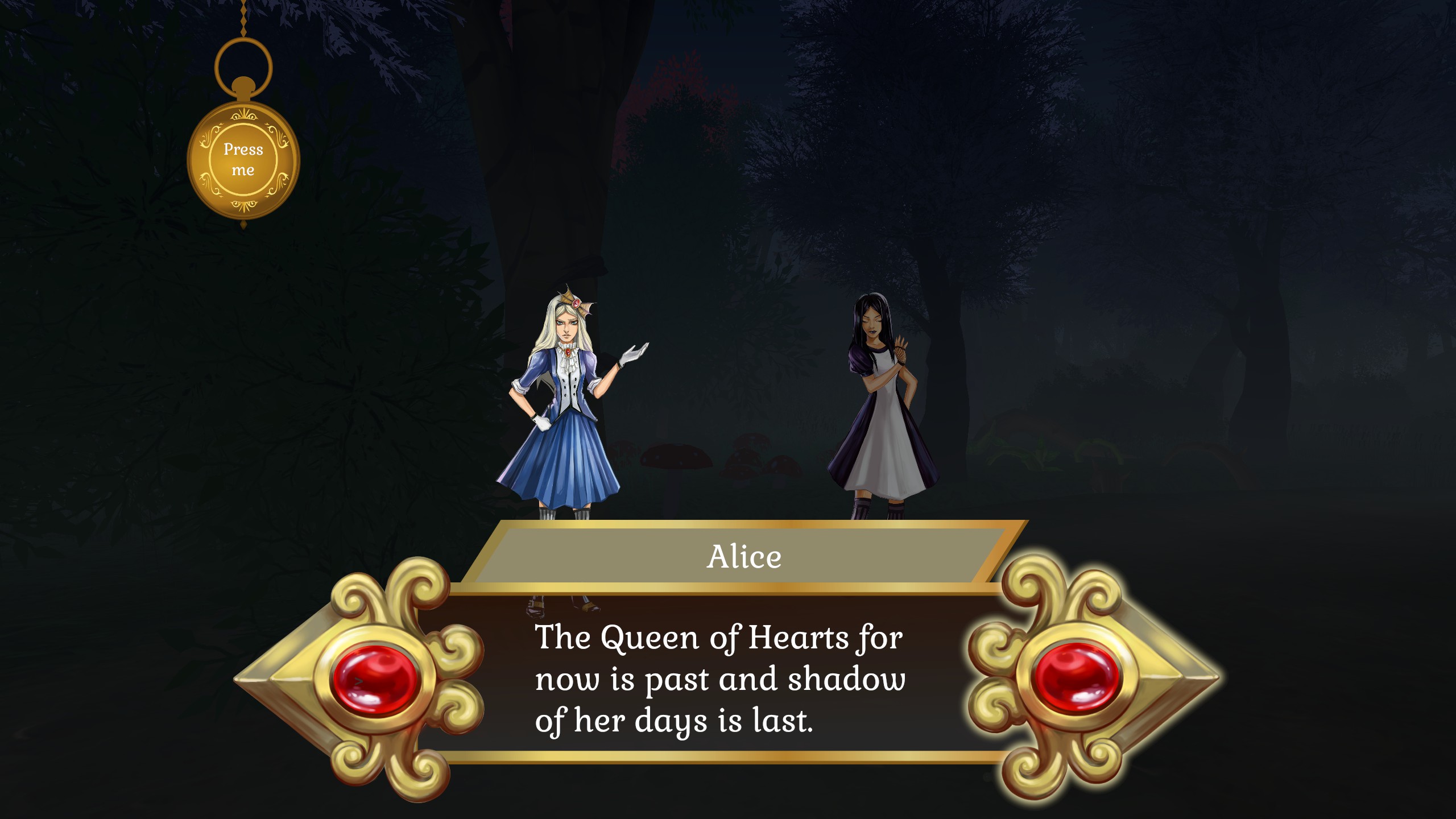 On the other hand, nearly every piece of dialogue is written in verse. I’m sure that took a lot of time and effort to have appropriate rhymes and have them flow correctly for the story. It’s a very commendable effort and I praise them for that. Although, every line being in verse can make the narrative a little confusing at times, but not enough where I was lost in terms of understanding the overall plot.

Regarding morality, there is some violence with enemies being hit and they flash red or fade away. In one of the final cutscenes, there is a small amount of blood present. Language is mild, only consisting of “d*mn”. Sexual content only pertains to small amounts of cleavage on a couple of characters. Supernatural aspects are kept to fairy tale magic.

Completing Guard of Wonderland fully and getting all the achievements will take around two hours so the adventure is pretty short. It has nice character designs, and the game being in verse is pretty cool. However, the combat accommodating for a traditional playstyle just doesn’t work in that favor and dragged the experience down. When you remove the most major aspect that had it stand out—the VR, it just ended up being another visual novel that I have no strong feelings about, positive or negative.