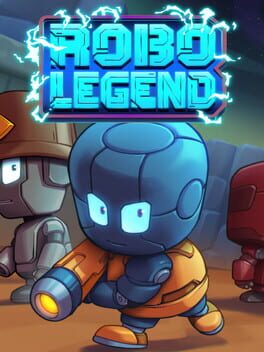 Thank You Little Neuron LLC for providing us with a review code!

Being tele-stolen against his will, Robo is now tasked with helping out the inhabitants of Gear Town against the dastardly Voidbot. Or maybe he’ll decide to help Voidbot instead. Robo Legend is about making the choices you want to make. Part twin-stick shooter and part role-playing game, it is the choices you make that will determine Robo’s fate, as well as the fate of Gear Town.

One of the main features of Robo Legend is the decision-making process. You’ll come across Gear Town residents that will have plenty of sidequests for you. Being polite or sassy isn’t just for flavor text. It may even result in more or fewer rewards for the completion of missions. You might be reprimanded if you’re rude to the wrong bot. While in the end there are only two major decisions to be made, it doesn’t simply lead to two endings. Missions that you do or don’t do can lead to plenty of variations. You may end up siding with Voidbot after all, but he might just double-cross you. Maybe you decide to save Gear Town after all the bad things you did, but the residents will still hate you.

The graphical style of Robo Legend is mostly pixelated and sprite-based. It serves its purpose with varying biomes, bright colors, and good usage of shading/shadows. The music and sound direction are competent, although a bit hard to remember outside of the moment. From what I do remember, each soundtrack in the levels fits the theme that the biome is trying to represent. The area called the Wilds uses sounds and instruments commonplace in many Western films. 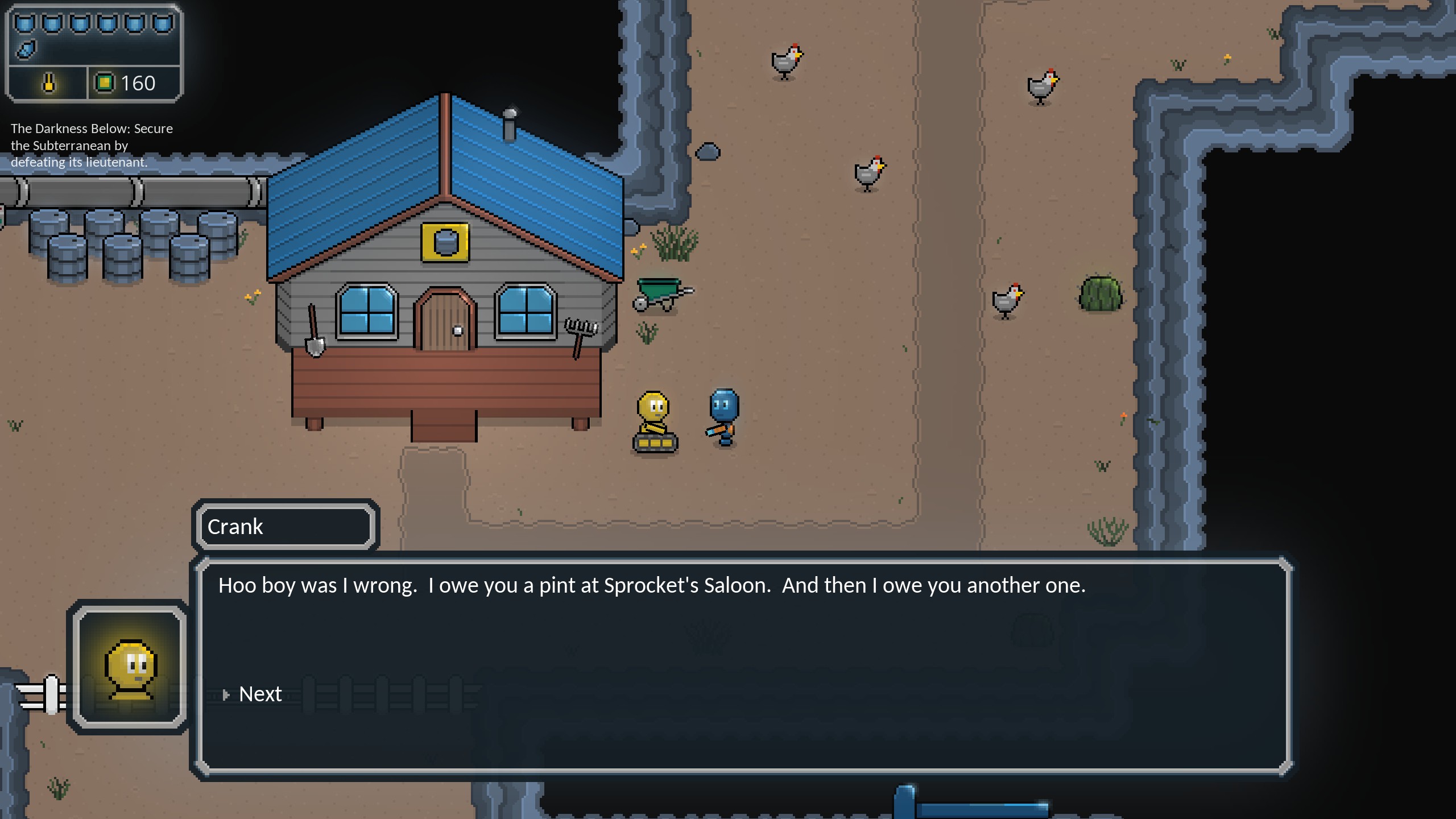 Strong Points: There is weight in the decision-making process; multiple side missions change up the gameplay
Weak Points: Odd choices made for controls; death isn’t punishing enough
Moral Warnings: Robot violence; you can choose to be the villain and end up with a bad ending

While the writing isn’t award-winning or anything, it’s competently written. The narrative doesn’t push you into either direction like other games with a “morality system”. Through the sidequests, you get to see how flawed and even incompetent the Gear Town residents are. Some of them aren’t even as good as they portray themselves. It makes you start to think if these bots are even worth saving.

In combat and simple navigation, Robo moves like any twin-stick shooter game with keyboard and mouse. Although gamepad options are not natively supported so I guess the moniker “twin-stick shooter” is partially wrong. Shooting is strange as while it is responsive, Robo only shoots when the left mouse button is unclicked. I am not sure why this decision was made either because with your secondary weapons and some missions, shooting works like any other game. Your primary blaster is competent and the main way you’ll be dealing damage. While secondary weapons can be used for combat, they mostly exist for the (rather simple) puzzles that exist. The puzzles never go beyond a certain point because they are usually self-contained. As there is some non-linearity in the levels chosen, this was a deliberate decision made.

If you played any twin-stick shooter in your life, I would recommend starting on hard or insane difficulty as opposed to normal or easy. While most enemies have the same amount of health, the difficulties make enemies and their projectiles faster as well as more of them on screen at once. Some bosses or encounters can feel radically different depending on the difficulty. For me, even on insane, I didn’t find the experience of Robo Legend too difficult as death is rarely punishing. Clearing rooms of enemies keep them cleared whether you die or not so dying in most cases is only a minor setback. I wish death was a bit more punishing, at least on the higher difficulties but I’m not too sure how I would implement it without it being annoying. 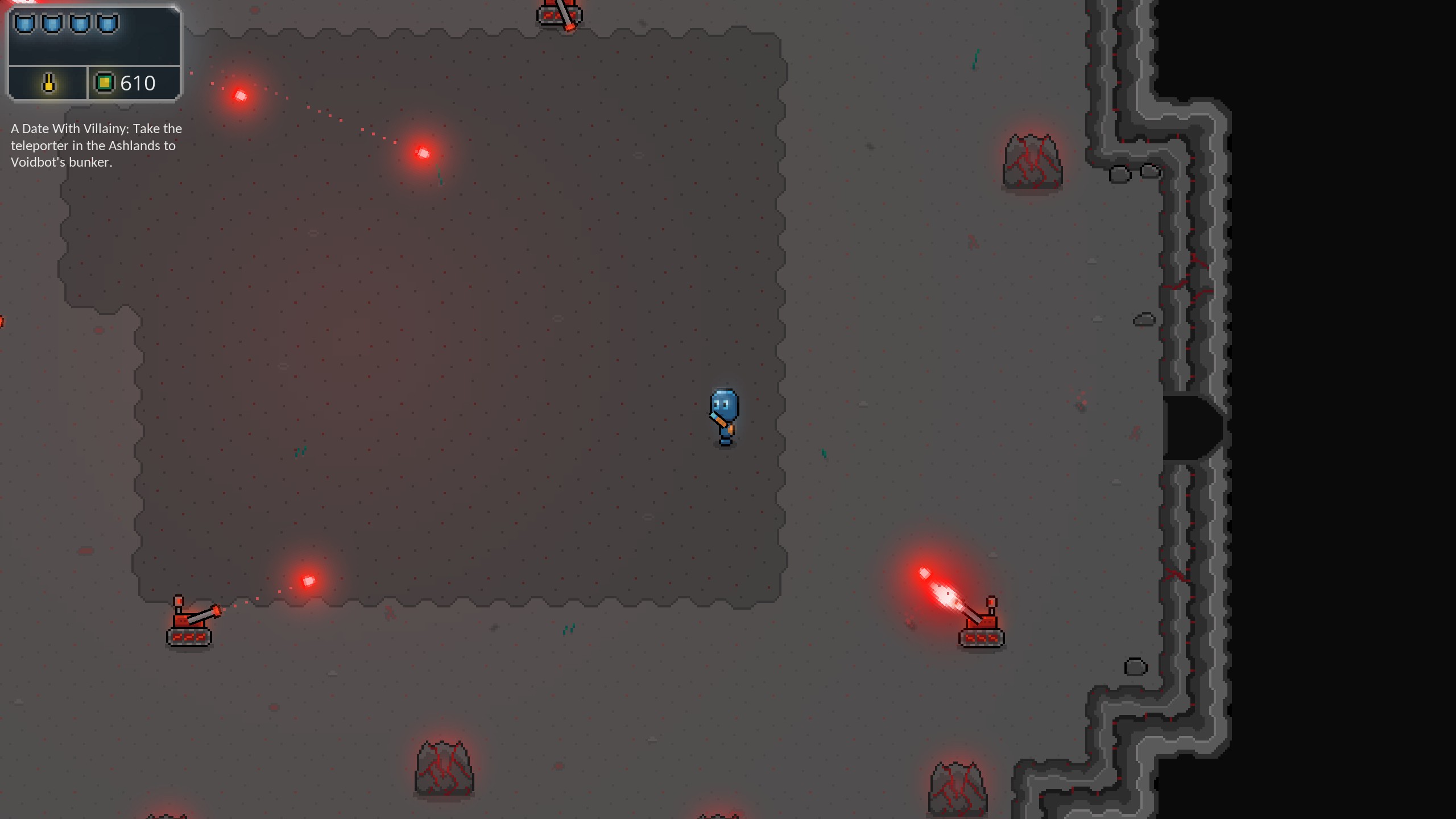 In Gear Town, you can use credits earned from levels and sidequests to upgrade your stats. The mechanics are kept simple such as increasing your projectile speed or movement speed. After a while, there will be nothing to spend your credits on besides health refills, so the number of credits earned through missions far exceeds what you can reasonably buy. I do wish there were some alternative weapons you could buy, which is even stranger as some side missions have you use different weapons—but only for that mission. Even if they were absurdly expensive, it would have been a nice touch for them to be available for purchase. Your health upgrades are handled Zelda-style, with it increasing after every boss defeated or pieces found in the world.

I did come across one glitch with the side mission Mole Menace 6. If you die during the mission, the boss won't respawn when trying another attempt. You have to shut down the game to attempt the mission again.

Moral warnings mostly consist of things such as robot-on-robot violence and the killing of animals. Most of them are robotic, while a few are living creatures. There are some real-world allegories such as oil being the equivalent of beer. The bad choices or decisions that can be made aren’t required to progress through the narrative, though they do dive into topics such as betrayal and genocide. The evilest ending involves the enslavement of the Gear Town residents.

While Robo Legend makes some very weird choices at times, I still found the experience to be decent. It did only take me around five hours to get the most heroic ending, requiring me to complete most sidequests so for an RPG it isn’t a lengthy one. Repeated playthroughs can get a bit on the tedious side as there will most likely not be anything new you’ll discover outside of the extra endings. It took me only a couple of more hours to see the rest of the endings as you can blitz through if you’re not going for the most heroic end. I do like that each end marks your profile in a way that you get to explore the aftermath of the actions made. Robo Legend keeps a mostly childish tone throughout so it targets a younger audience. With the content at hand, the evil ending may be of the most concern for very young players. Robo Legend is made by mostly one person and for what seems to be his first game, it isn’t bad at all.