Note: This game has a free demo you can try before you buy on its Steam page. This option is also available on the Switch version. I would also like to thank my good friend Jaimas for the information pertaining to the Switch version's performance. This review will primarily cover the PC version but will cover information relevant to the other versions as needed due to the limited cross-play built into the game code. Please be advised this review will spoil Dragon Quest 2 for those who have not played it, as it both retcons and expands on the original plot though is set chronologically afterward.


Some things, like peanut butter and jelly, go together quite well. The Dragon Quest Builders series combines the aesthetics and tropes of the Dragon Quest series to a fusion with Minecraft's block art sandbox gameplay, and the resulting mix is rather fun. While the first game was console-only and had some limitations, Dragon Quest Builders 2 is also available for PC players and has more fun for all who loved the first.

Set after the canon ending of the second Dragon Quest game, in which the evil wizard Hargon and the Lord of Destruction were defeated by the Scions of Erdrick, the game begins with a new conflict. Remnants of Hargon's army known as the Children of Hargon seek to capture and persecute builders, as creation is anathema to Hargon's teaching. Your character is a builder who can be customized as either a male or female and soon after a tutorial on the ship commanded by the monsters who captured you, you wind up shipwrecked. You wash up on a mysterious island, meeting a young man named Malroth who seems to have no memory of how he got there. Further, as you use your building skills to survive and evade the agents of the Children, you discover there is a lot more than meets the eye to the part of the world you washed up on. This culminates in a lot of adventures in both building and survival that reveal new truths about the original fall of Hargon and the true nature of the Lord of Destruction, and your amnesiac friend is discovered to have his own unique ties to the same.

The gameplay is a mix of Dragon Quest as adapted to an action RPG format, combined with the survival gameplay of the Minecraft series. Unlike the first game, this one has greatly increased building limits, an advanced game AI where NPCs are capable of automated actions and can assist the player in many ways, and complex fluid effects like waterfalls are now possible compared to the first game. The action RPG sequences and the survival aspects are closely linked. While you must upgrade your equipment, hunt for food, and take down monsters, you must also fend for survival. Building shelter, assisting other NPCs in doing the same, and establishing thriving settlements will be key in furthering your quest to get to the bottom of the game plot. The PC version also comes with all prior console DLC content pre-integrated. This provides a lot of bonus places to visit and things to build to further extend your options for what structures you can create.

Graphically, the blocky polygonal look of Minecraft is married to the colorful, cartoony artwork of series artist Akira Toriyama. The overall effect is generally pleasant, with bright colors, and the block-style art makes the world feel like the giant sandbox it tries to be. Character models are of somewhat higher quality than the Minecraft block art style the Builders series imitates, and the animations are varied and give each NPC some flavor. As long as the player can maintain either a smooth 30 or 60 frames a second, there are no hitches or other issues in the game engine. 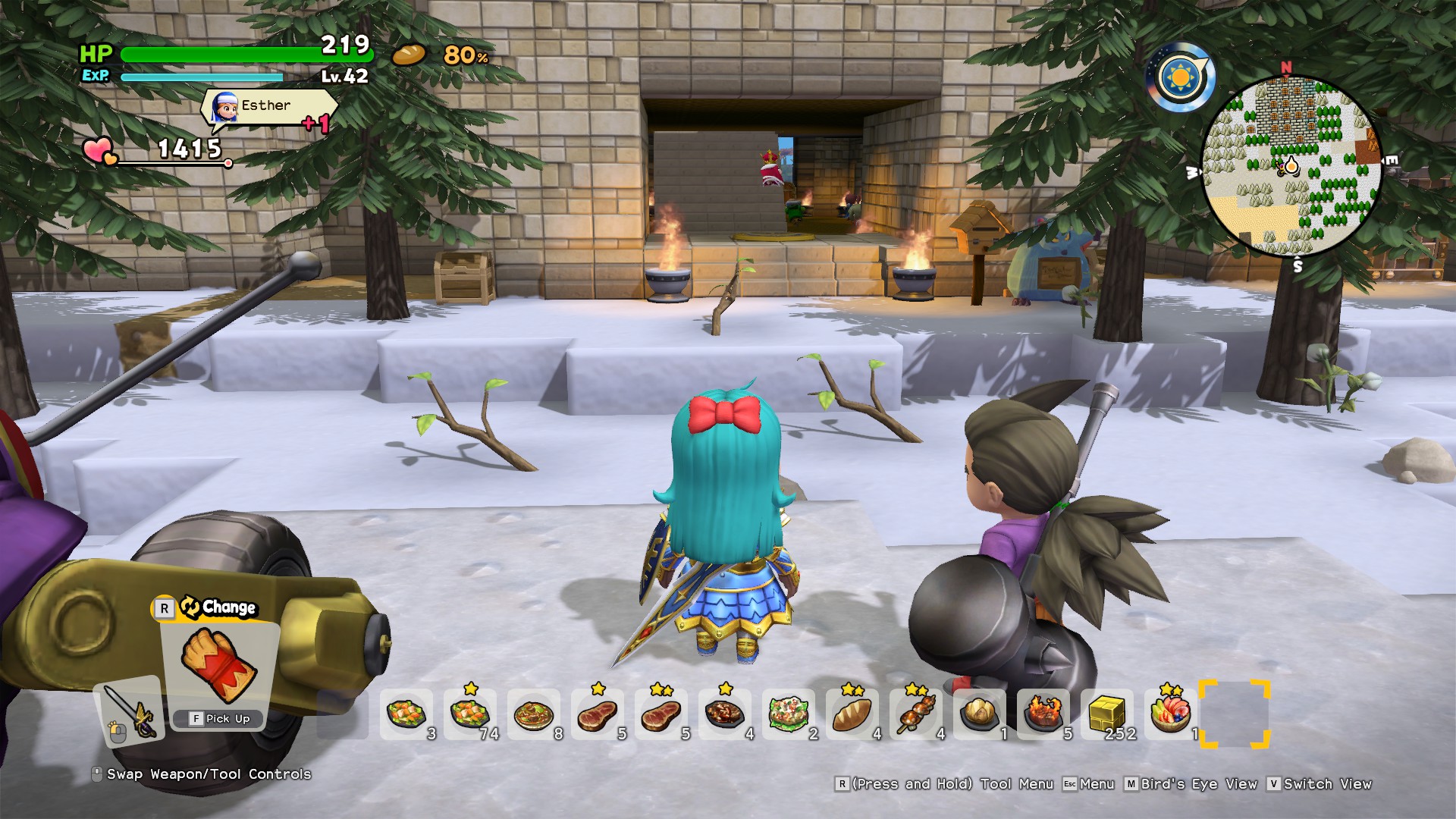 Strong Points: Massive improvements on the first game in every regard; great story; lots of creative options available
Weak Points: No officially supported local co-op play
Moral Warnings: Bloodless violence in self-defense; a few dead bodies (though you are given the option to bury most of them); mild language (h*ll and d*mn); mildly revealing outfits; depictions of an evil cult and implications of necromancy

The music and sound effects crib heavily from the instrumental and orchestral stylings of the previous Dragon Quest games, so if you enjoy the musical work of Koichi Sugiyama, you will be for an aural treat. There are no spoken dialogue sections, though there are grunts and the occasional monosyllabic word like "Hey". As a warning, there is some default game behavior that seems like a bug in the audio engine, where for certain scenes, the music will abruptly cut out, but this is actually done at scripted intervals, like when they show off how to build certain blueprints and other critical story scenes where the game wants your full attention. It will resume normally past these sequences.

The game can be controlled by either keyboard and mouse, or via any compatible PC gamepad. I recommend the latter, though the former is perfectly serviceable. Keys can be remapped, but the default control guide will be less helpful if this is done, and I found the default controls very easy regardless of the device to adjust to. However, one caveat. Both types of controls allow camera zooming in and out, though I got used to doing this quicker on a gamepad/Steam Deck than the keyboard, that was just my experience. To be a bit more specific, on the gamepad I found camera zoom to be a bit more smoothly done as opposed to the keyboard.

Multiplayer is limited to the online sharing of screenshots via an accessible noticeboard feature and online co-op play supporting up to 4 players. There is a limited degree of crossplay compatibility built into the game code for all systems (screenshots are sharable for all systems, co-op play only for those on the same system), but players are generally limited to their starting island and the Buildertopia custom islands for co-op play, though the latter is widely customizable. Local co-op play is not officially supported but is possible with third-party tweaks, but this is done at the player's own risk.

Stability, at least on the PC, is perfect, a medium-range system that clears base requirements can easily max the game out on the highest settings. Steam Deck/Linux performance, while the game is not rated for being supported, is also nigh flawless, with the only anomaly being the opening movie does not seem to play. Still, it's nothing critical to be concerned about and gameplay is not affected in the slightest. The Switch version suffers framerate lag if you have a lot of action happening or intense graphical effects are being displayed, mostly because this game seriously stretches the limits of the Switch's CPU at times. On anything stronger than the Switch, quality and framerate are comparable to the PC version. Online features are confirmed to work fine on all known systems, and crossplay support is still functional as of this writing.

Morally, there are some issues, though tempered by some commendable themes.

Violence is of the action RPG style. It is generally bloodless (any blood is implied at best) and without gore. There are one or two sequences where the fallen allies' bodies do not disappear after death, but these exist so the player can give them a decent burial, for which the game provides a helpful tutorial. 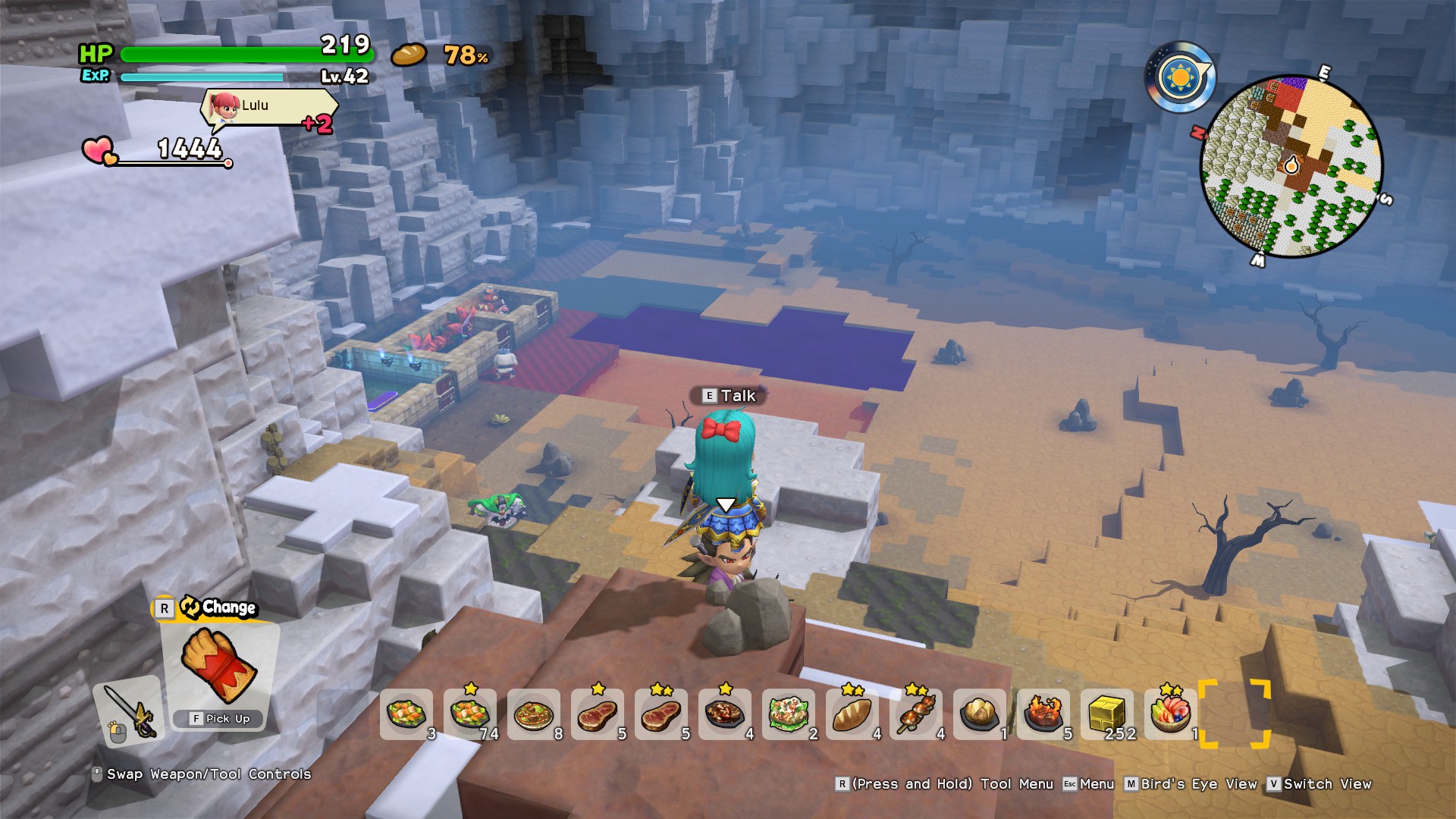 The language is quite clean. A lot of usage of h*ll and d*mn are present, nigh always in a religious context, specifically referring to demons and their actions. Sexual content is also quite low. There are some outfits like bunny suits and swimsuits, but the art style has leaned heavily towards the cute/weird rather than sexual, though some like the bunny suit are oddly unisex, which looks distinctly comical on males. Aside from a few references to going to the bathroom (as "night soil" can be harvested from latrines to make fertilizer), the dialogue lacks crude innuendos.

Religious conflict is integral to the plot. The "good" religion, per Dragon Quest tradition, is heavily based on Western-style Christianity, only with a generic goddess named Rubiss as the God stand-in. Otherwise, its morals and values are generally identical to real-world Christianity, with a heavy emphasis on the glory of creation, effectively a fictional analog to the following verse:

"For we are his workmanship, created in Christ Jesus for good works, which God prepared beforehand, that we should walk in them." - Ephesians 2:10

Conversely, the evil religion, known as the Children of Hargon, is about as kid-friendly as you get to a depiction of a devil-worshipping cult. They venerate destruction for its own sake and notably persecute those who follow the teaching of Rubiss, demanding the destruction of her altars and the ban on all acts of creation. More than one person is shown martyring themselves instead of bowing to the demands of the Children, and the game holds these people up as having chosen righteousness unto death. The key moral conflict of the game is a spiritual tug of war for a key character's soul to do good or do evil. It is through the good example of the player said character, who was originally unredeemed, willingly opposes the Children of Hargon and with the player's help, frees the world of their ways for good. Many former members of the Children of Hargon are also convinced to repent of their sins and become protectors of all that is good instead as well. Much like the first Builders, pointed inspiration is taken from the Christian Bible. Themes from the Garden of Eden and Noah's Ark are quite prominent and form key themes that resonate throughout the rest of the story.

Given the younger age demographic of the game, while a lot of depraved acts like necromancy are referenced and implied, nothing explicit is shown, as the game opts for the "leave enough implication the audience can guess the rest from context" approach. As a result, most of the seriously depraved acts the Children of Hargon are confirmed guilty of are generally offscreen, only with the aftermath evident. There is a pronounced amount of demons, ghosts, skeletons, and zombies, given they are common enemies and recurring characters in the franchise, though they are presented in a rather cartoonish manner. Further, it's implied the "demons" are merely another subspecies of humanoid rather than those who are "evil" by default, with some even fully renouncing the Children. The undead, while it's implied the enemy is not above replenishing their ranks via their creation, remains merely implied.

Morality is a key aspect of the story. You are a Builder, one who, by default, chooses moral choices more often than not and becomes both a moral center and authority figure for those oppressed or terrorized into the service of evil, helping many find the moral courage to resist and renounce the same. Traditional values of loyalty and sacrifice are reinforced throughout, with the Builder becoming like a surrogate relative to many in the story.

Overall, for the price they ask, you get a lot of replay value, a great story, and a technically sound title. Morally, it has some concerning themes, tempered by many morally upright ones, and it's suitable for older children on up. I absolutely enjoyed it, both as an action RPG and creation sandbox. Also, even if you are not a regular to the Dragon Quest series, Dragon Quest Builders 2 is still a worthy game if you enjoy the genres it synthesizes.