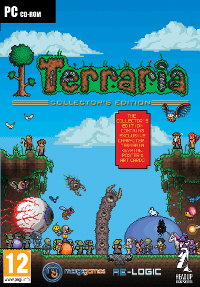 While many have seen Terraria as a rip-off of Minecraft, that couldn’t be further from the truth. In fact, Terraria expands on Minecraft’s premise of sandbox survival in nearly every way by adding a huge variety of weapons and armor, ore, and boss fights. Even though Terraria is 2D, it manages to preserve the magic of exploring a new cave for the first time or digging deep into the bowels of the world to find the rarest ores. Unfortunately, once all of the bosses have been defeated in both normal and hard mode, there is little reason to return unless you find mods or servers that have new content to enjoy.

After creating your character using a plethora of premade hair styles and coloring your generic starting outfit, you are placed in a forest in a vast 2D world filled with monsters. Thankfully, only weak, blob looking creatures can bother you during the day. However, you had better build a home before night falls because zombies and flying eyeballs with dangling optic nerves will hound you if you’re exposed. Once you’ve built a house, you typically start digging into the earth to find copper, silver, gold, and more to create armors and weapons to increase your chances of survival. Once you feel relatively powerful, you can perform a variety of hidden tasks to summon powerful boss creatures. Each boss not only has unique attack patterns, but they spawn in completely different environments. This causes you to have to adapt greatly for each boss fight and to make sure that you have the right equipment before facing these monstrosities.

Once you have spent the many requisite hours defeating the normal bosses of Terraria, a hard mode is unlocked. This is not really a difficulty setting, but rather a change to your world that causes new, much more powerful monsters to spawn. The difficulty spike here is insane, especially with the new bosses. Since most of the really good equipment in hard mode requires items that the new bosses drop to create, I quickly tried to kill the easiest of them. I died a horrible, horrible death. Despite the fact that my character had the best gear that you could get in normal mode, it was not enough to stand a chance against the new bosses. I found myself at a point where I couldn’t continue alone because the only way to get stronger was to use the items obtained from killing one of the bosses I couldn’t kill. Thankfully, playing with my brothers made beating them possible, but it was still really difficult. Once you have defeated all of the hard mode bosses, Terraria does not have much else for you to do. While sculpting magnificent sculptures had great appeal for me in Minecraft, making homes in 2D felt far inferior. Although the developer had said that no new content would be made for the game, this may change for PC players after the Xbox Live Arcade version comes out (the XBLA version definitely has new content). While some modders have added quite a bit of content, these add-ons can be less stable than the original package and may not include multiplayer. 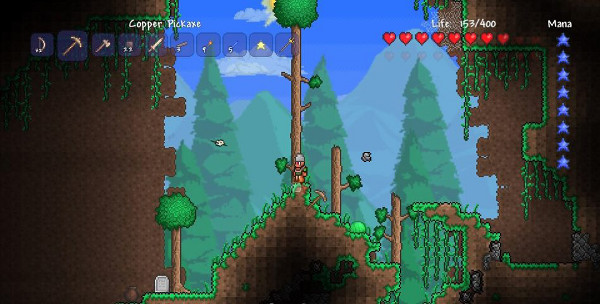 Strong Points: Spelunking in a vibrant 2D world, destructible environments, multiplayer, more RPG elements than Minecraft
Weak Points: “Hard-Mode” bosses are too hard for single player, can feel like you have to grind to get some equipment, lack of tutorial in the PC version creates a reliance on external game guides
Moral Warnings:Slight caution for younger players due to presence of demons, magic, and gory-looking creatures

If you are interested in a greater challenge, the game can be played in three ways: softcore, mediumcore, and hardcore. Please note that these modes are separate from the "hard mode," which is really just the name for the second part of the main game. The first difficulty has a very minimal punishment for dying, but mediumcore causes you to drop all of your items where you died and hardcore actually deletes your character upon death. I tried mediumcore and the game changes into a much more stressful, but rewarding experience. Although I found this difficulty more fun, the fun stopped when I reached the last boss of normal mode and all of my hard-earned gear fell into the lava when I died. Try the harder difficulties at your own risk.

Even though I only played with a couple of friends, Terraria can actually support up to 255 players if you have the appropriate server and technical know-how. At the very minimum, you can easily create a server to support 8 players without needing to modify any of the server options. Multiplayer games are not the easiest to connect to and require you to know the IP address of the server you want to join. I personally used Hamachi to connect with my friends.

The Xbox and PS3 versions (I personally played the Xbox version) contained several new features. In my opinion, the largest addition was the split-screen cooperative mode for 4 players. However, even on a large screen, sharing the viewing space with 3 other people was pretty difficult and I found that 2 player split screen was optimal. The other new features that differentiate this version from the PC one are relatively minor. The user interface was spiced up and looks much better, enemies have health bars, the crafting menu is more similar to the Xbox version of Minecraft, and a new final boss and a few new items were included. To accommodate the controller input instead of the mouse, 2 different mining modes were added: one allows your character to mine generally in a given direction and the other allows pixel perfect construction or destruction. Even with all of the new content, Terraria is still the same experience on consoles as it was on PC.

Graphically, this game looks relatively primitive, but it has charming pixel art graphics that are more than serviceable. Despite the fact that the world is procedurally generated, the developer did a good job of making the environment look natural. Additionally, each of the biomes feels unique because of their different art; forest, jungle, and the Corruption all use different color palettes and are even procedurally generated differently. The attacking, shooting, and spell casting animations are fluid and effective and make each attack feel powerful and effective. Finally, the boss battles are epic due to the size and malevolent look of the boss sprites. In the end, Terraria’s graphics are not state of the art, but are well-done pixel art that gives the game a good retro-game feel.

Unfortunately, this game has little to no story. Your character is placed haphazardly in an unknown world with no direct goals and minimal instruction. In fact, the NPC that serves as the tutorial for the game is definitely lacking and a true tutorial system would have alleviated the large learning curve to this game. The process of attracting NPCs to live in your town is also nebulous and required frequent use of the wiki to figure out. Even though Terraria does not have a story, that lack seems par for the genre and might be a conscious design decision by the developer.

The sound effects for this game are effective and some of the background music can be catchy. However, after many hours of spelunking, those catchy songs can turn annoying. Many enemies have their own noises and their sounds can help you identify when they will attack or if they will teleport (this applies to some of the harder creatures). Your character's magic attacks also have unique and appropriate sounds. In this field, Terraria definitely gets the job done with its sounds and soundtrack.

Terraria is not rated by the ESRB, but I would give it a T rating. Some enemies are undead or even demonic and will explode into pieces when killed. The player can kill enemies using swords, bows, guns, and a variety of magical spells. Also, some enemies are pretty graphic; one enemy is a detached eyeball with an exposed optical nerve. Several of the items and creatures have demonic origins: a voodoo doll can kill one of the NPC’s and “demon altars” are used for a variety of purposes including summoning some of the bosses. In fact, the voodoo doll must be used to kill one of the NPC’s to summon a boss that is required to access hard mode. Even though the game contains the aforementioned occult content, it is relatively superficial and portrayed with cartoony, pixelated graphics. The lowest level of the world is hell themed and has an ore named hellstone. In hard mode, you can create angelic or demonic items. Finally, one of the female NPCs wears a bikini-like outfit, but this is still fairly mild due to the low resolution pixel graphics.

After considering all of the above, I found that Terraria was fun, provided many hours of pulse-pounding entertainment (especially when I played on mediumcore difficulty), and gave a great sense of progression throughout the experience. Conversely, the lack of a (PC version) tutorial, huge difficulty spike for hard mode, and grindy aspects lowered my enjoyment of the game. Thankfully, these faults are easily outweighed by Terraria’s strengths. Therefore, I would recommend this game to teens and older who can accept some of the unsavory content.