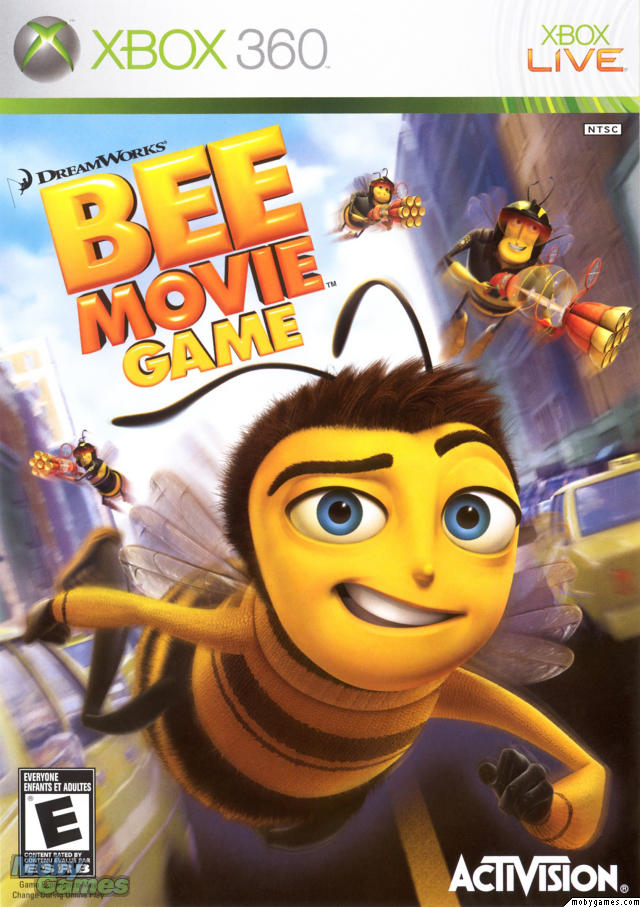 I’m going to try my hardest not to make any obvious jokes here, but it’s not easy when the absurd amount of possible jokes are the only remarkable thing about a game. It’s based on a movie that didn’t do very well with the critics, was only a moderate success, and failed to ever get past the feeling of “Hi, I’m Jerry Seinfeld, and I’m in this movie. Scratch that, I AM THIS MOVIE!”

Not that either were horrible, but what can be said of middling experiences that do nothing unique or worthwhile? Bee Movie Game isn’t awful; I’d actually say it’s decent for a movie-based game, but everything about it feels bee-low average…I apologize for that and all the other bee-related puns that follow.

As in the movie, players follow the story of Barry B. Benson, a bee unhappy with his tedious existence. He decides shortly after graduating college to venture outside of the hive with the danger-seeking pollen jocks. Unfortunately, Bee Movie Game recaps the events of the movie—only with a few, small changes, like the removal of almost all of the transitional and expository scenes. The entire story is told through flashbacks while Barry is chatting with a talk show host about his adventure. This is an interesting way to look at the story, since the events’ outcomes are already known, but many scenes are left out or remain unexplained. Transitions are non-existent as details like when it stopped raining or when something was planned are left completely unmentioned. I sincerely doubt that most players will be able to follow the story between major plot points, and that’s not acceptable given how simple the tale is. Even important scenes like Barry’s first meeting with Vanessa, a human florist who bee-friends Barry, are never shown.

What’s possibly even worse than the butchered story is that this title had potential. It was developed by Beenox (yes, I know), who later went on to make Spider-Man: Shattered Dimensions, and despite the time constraints I guarantee the team was under, they were able to fit quite a bit of content into Bee Movie Game. There’s dogfighting, single and multi-player racing, pseudo-stealth sequences, minigames, and Quick Time Events (QTE)—a lot of Quick Time Events. 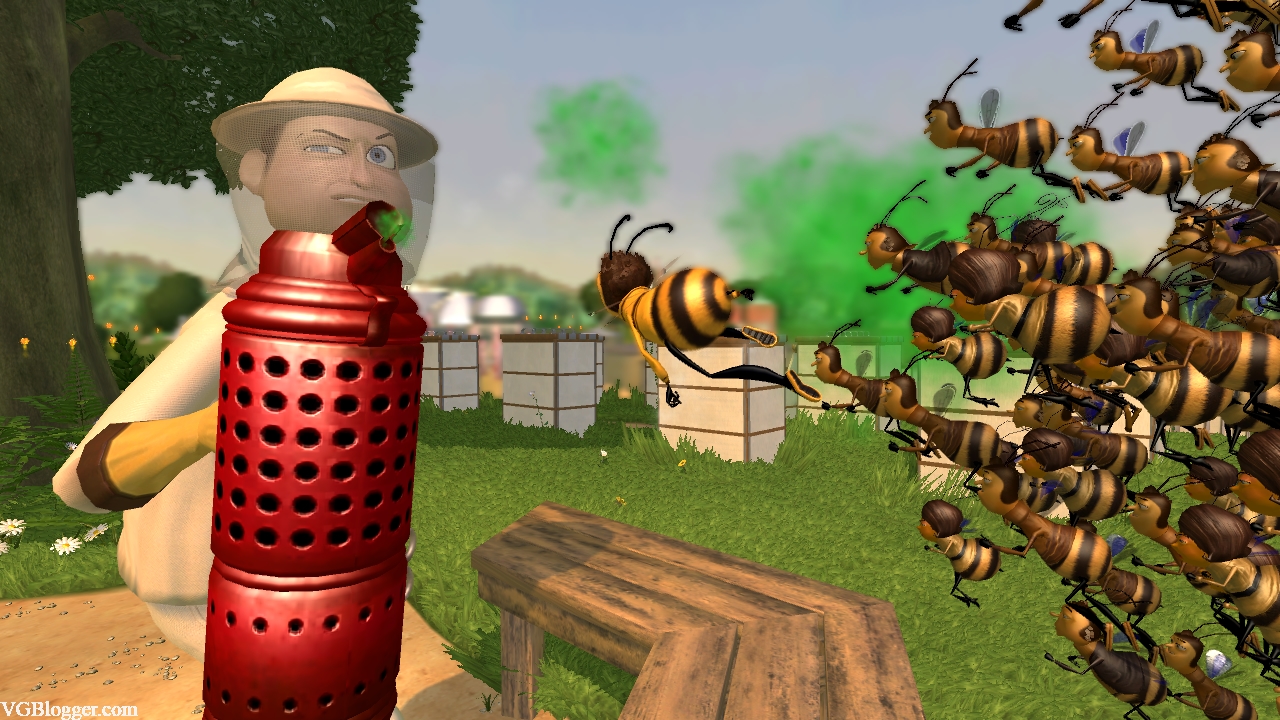 I’ve always considered QTEs to be a crutch for developers, a seemingly necessary one at times, but what should only be a crutch for a troubled project is more like a senior citizen’s walker here. It was a rare occurrence that I went 5 minutes without having to dodge a human’s slap or weave between cars in sequences that feel as if they had been transplanted from Dragon’s Lair or Road Avenger. The only difference is that those games kept their cohesion thanks to advanced animation and intense action, neither of which are here. In their stead is a jarring mish-mash of minigames, QTEs, and aerial combat hastily thrown together to meet a deadline.

For what it’s worth, Beenox managed to create a fully functional game, but it never rises above that. There are plenty of neat ideas, like using Barry’s “Bee Reflexes” to dodge raindrops or donning a disguise to literally be a “fly on the wall”, but they feel disconnected as well. The core content is formed out of these types of sections, but to access these sections the game requires players to play through completely unrelated minigames. The story’s pacing is bogged down even more because of this, and as someone who watched the movie, I still rarely knew what was going on.

I suppose the Bee Movie Game’s intended audience won’t care, since they’re likely to have already seen the movie or be indifferent to the story’s weak presentation. In fact, it wouldn’t be surprising at all if they liked it—the difficulty is appropriate throughout, there’s plenty of serviceable voice acting, the entire hive can be explored between missions, and the gameplay rarely feels repetitive thanks to all of the other activities available. By all indications, this is a title that perfectly encompasses what a movie-based children’s game should be; but it doesn’t. 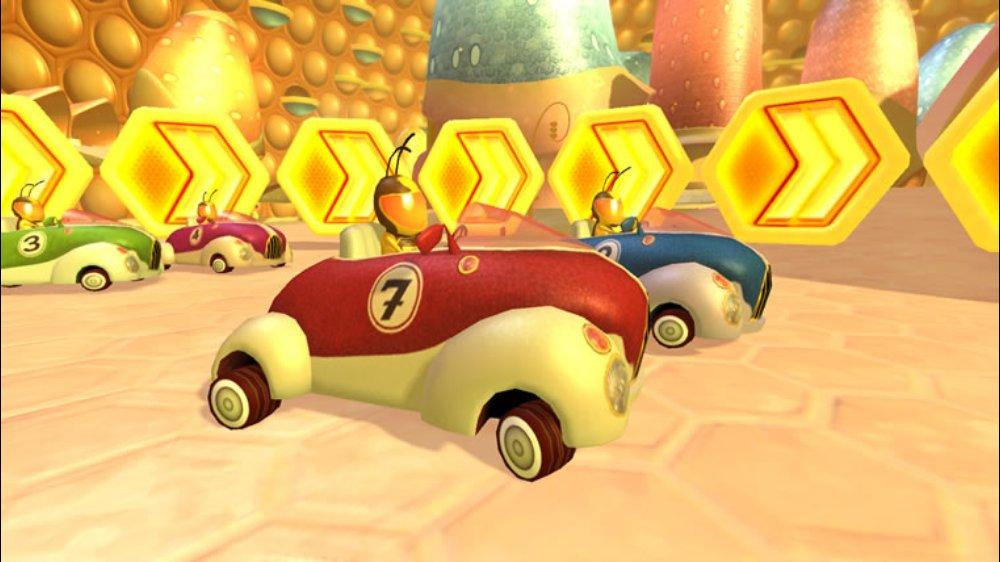 It’s a bit disappointing too, since some of the story sections actually seemed to have had thought put in their designs. Excluding the aforementioned QTE areas, the action was intense and engaging. DDogfights against swarms of rival insects, tense moments while dodging raindrops, and sections requiring clever concealment from weapon-touting humans who do not want to get stung—there are some brilliant levels hidden in here. Unfortunately, they’re hidden underneath so many unnecessary mini-games and QTE's.

Everything about the game is functional, right down to its aesthetic. Outside of the hive, there were a few moments that left me with a lasting impression; such as the first time venturing out of the hive and into a park in spring or flying through the rainy streets of New York City as time slowed to a crawl thanks to my Bee Reflexes, but the rest were all dull moments muddling my way through uninteresting landscapes and confusing pathways. The world and characters recreated for Bee Movie Game feel lifeless and bland; zany personalities abound, but few of them feel like anything more than stereotypical caricatures that can be found in countless other places.

Even one of the movie’s most important elements (arguably), the voice cast, all seemed to have phoned this in. Delivery feels heavy-handed, almost as if Jerry Seinfeld and friends weren’t sure if everyone remembered them and overcompensated instead. The narration however, is much more competent and a great addition throughout the story mode.

I almost want to like Beenox’s creation, but I don’t. I really don’t. Aside from some minor bug-related violence, this isn’t a bad action-adventure option for small children, but it’s hard to recommend it for an audience that’s unlikely to have even seen the movie. Bee Movie Game is hopelessly mediocre, and bee-yond an average kids’ game, there just isn’t much here—excluding easy bee jokes.