Thank you Maximinus for sending us this game to review!

Ever since their introduction, Xbox Live Indie games have been the butt of more jokes than I care to count. “$1 worth of boredom and mediocrity.” “Everything that isn’t completely horrible gets four stars – there are a lot of four star games.” “Hundreds of games, and about five of them actually have gameplay.” “Hey, it’s kind of like those Flash games I used to play, except I have to pay for them now.”

To be honest, most of those are near-truths. There is an absolutely ridiculous amount of bad games in the marketplace; it’s absurd. For every good game, there’re about a hundred blatant clones and butchered opportunities. It’s more than earned its bad reputation. But there are some real gems buried in the 2,500 some odd games, and I intend to find at least some of them.

Which brings me to Red Tie Miner, a cross between spelunking (cave exploration), platforming, and just a dose of mining. After falling down a mineshaft, you’re tasked with climbing back up to the surface, just five massive cave systems away. Using your wits, pickaxe, and an assortment of tools available at your local…erm…underground cave shop, you must claw your way back to the surface overcoming any and all obstacles that present themselves. 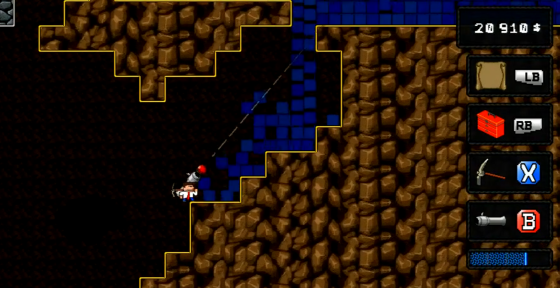 At first glance, one couldn’t be blamed for drawing similarities to Minecraft, Terraria, or even Spelunky. There’s mining, expansive cave systems, and the main character has a pickaxe (because that’s [i]clearly[/i] a basis for accusation), but Red Tie Miner distinguishes itself from its competition in its pacing. Instead of one randomly generated open world, Red Tie Miner is level based, and so far as I can tell, each cave is handcrafted. This leads to a more linear feel, but also means that each cave is like a maze: dozens of dead-ends with only a few legitimate paths.

It’s all about the feeling of exploration and adventure, rather than of danger and paranoia. Once a small amount of mining is done, most of the tools become accessible, and the game is a cakewalk from there. A grappling hook, parachute, and a few others make cave traversal a breeze, and that’s not a bad thing.

There’s nothing in this title that makes it feel particularly urgent. No clock ticking down or score to beat; it’s just a cave and a guy with some tools. Explore at your own pace. The game won’t judge you because you took too long or mined too much of the cave. Play with some of the tools for a while – see how much the world changes when you use the world rotator or try getting around with only the grappling hook – just get to the exit when you’re done. 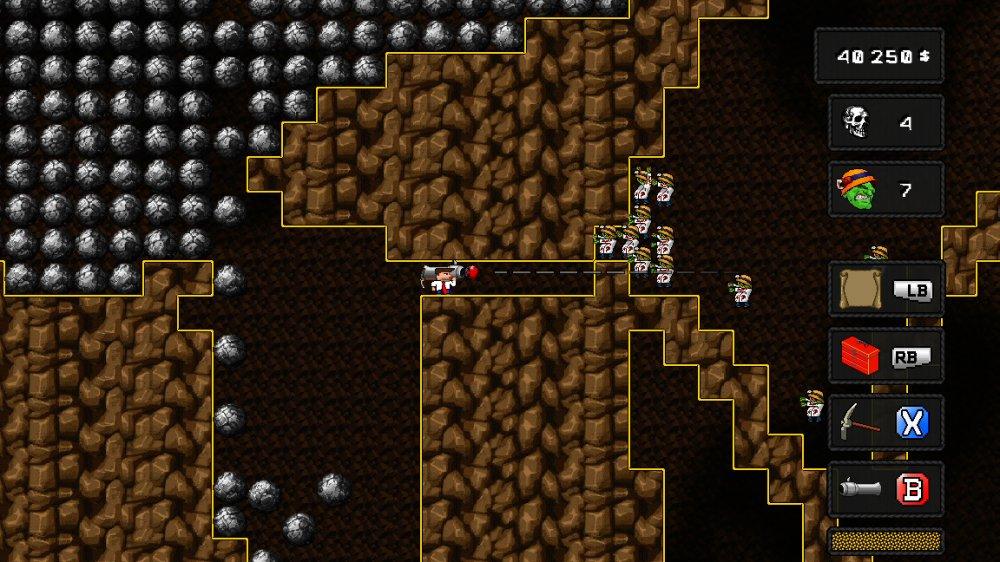 The world isn’t out to get you in here, and in all likelihood, you’ll usually be the one at fault when you die. Water, lava, falling rocks, and deadly drops present nearly all of the game’s threat, but even these won’t happen very often to the careful explorer. Everything (excluding the player character) moves at a leisurely pace, flowing with the title’s laid-back attitude. Liquids slowly dribble down, boulders slide smoothly down, and there’s almost always time to react when the character suddenly falls. Regardless of what’s going on in the game’s world, the music continues at the same steady pace, and the player’s pickaxe almost acts as if it were a metronome.

Of course, there are times when things pick up quickly. Like when a massive water or lava pocket is broken, and a mad dash for cover begins, or when an unexpected rockslide begins as part of the level design. These moments inject some action and excitement into the game, even though they don’t carry too much weight. You see, death isn’t terribly demoralizing in Red Tie Miner. All your tools will be lost, and your position will be reset back to the shop, but there is no life counter or other deterrent for failure. The lost tools can easily be gained back through mining, and other than a few minutes of backtracking, no progress is lost, once again reinforcing the game’s complete indifference to failure and time wasting

Unfortunately, quitting mid-level is another story. Saving isn’t accessible in-game, and only the levels you’ve reached are saved and readily available. So even though I may be one block away from the exit, quitting means starting all the way back at beginning of the level. Granted, the levels aren’t overly long, and there’re only five, so this only affected me a few times, but it’s annoying nonetheless. 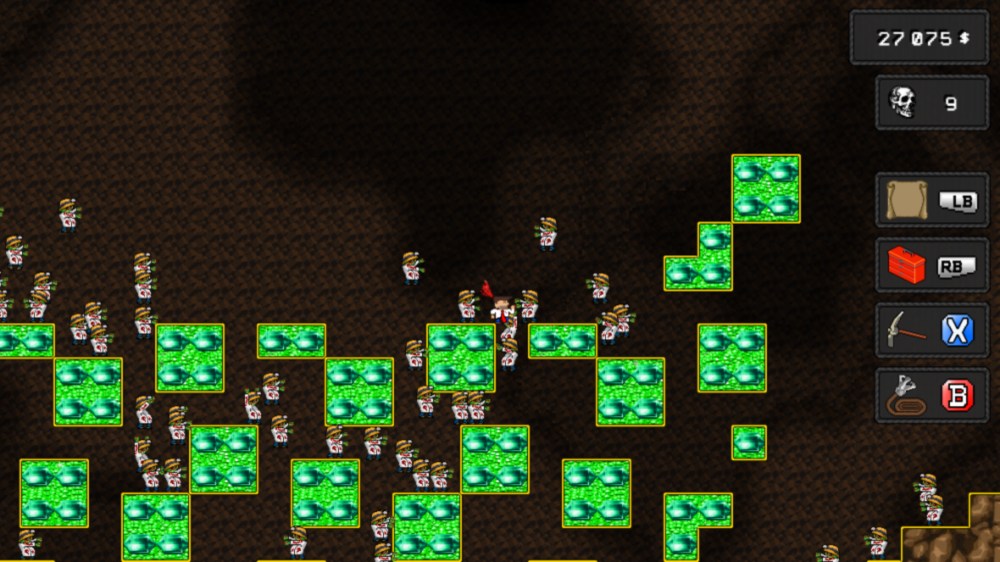 Before closing, I need to mention that Xbox Live Indie games are not rated by the ESRB. That means the possibility of mature content is present (and accounted for). Blood is the most common problem, and small amounts of it appear upon death. The only other problem I was able to find was an instance of the F-word being used in abbreviated form.

There’s not much to complain about in Red Tie Miner; its short length is compensated for by its low price and high quality. The rest would just be nitpicking: a few moral problems, no mid-game saving, and not much challenge. It’s a quick play, and there’s really nothing wrong with that. No fluff and no unnecessary frills, just pure gameplay. If you’re an obsessive-compulsive Minecraft cave explorer, then I can’t recommend this title enough.