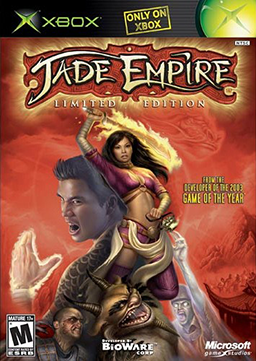 Over the years, plenty of games have slipped through the cracks due to poor planning. Whether it’s because of ineffective marketing, futilely attempting to compete with larger titles, or in the case of Jade Empire, releasing at the end of a console cycle. Sometimes, games just don’t sell, despite how amazing they are, and Jade Empire is amazing.

Jade Empire is an action RPG drawing inspiration from the Wuxia tales of old, set in the fictional Jade Empire. After choosing your character, your journey begins in the small town of Two Rivers. More specifically in the Two Rivers martial arts school, testing your fighting abilities against a fellow student. But after a bandit raid, you’re forced to leave the town in order to find answers…and your master.

Like any good kung-fu movie, Jade Empire has a ton of fighting with numerous different styles. Combat is real time and is comprised of the usual light and heavy attacks along with blocking and dodging. Special abilities can also be utilized, such as slowing down time or increasing your attack power, at the cost of chi (magic) or focus. 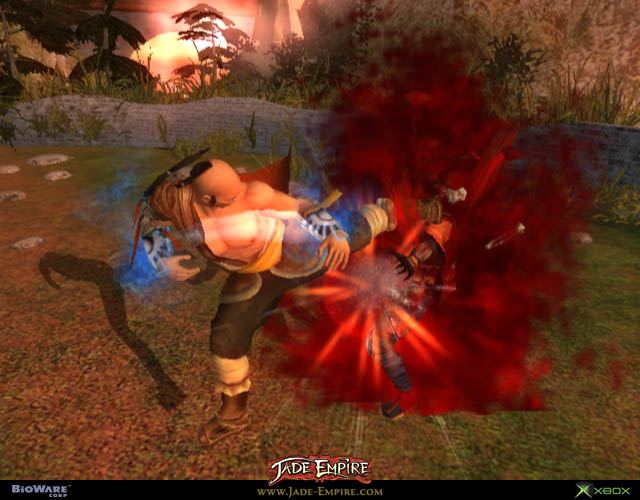 Certain styles also drain chi/focus, but only the more “unique” styles. And by unique, I mean using weapons, shooting fire, and other all around absurd styles. Yes, there are plenty of more realistic combat styles, but they are far outnumbered by the more fantastical combat styles. Fighting while drunk, transforming into other creatures and sprouting Wolverine-like claws are just a few of the more unique fighting styles you can learn throughout the course of the game. Each style can be upgraded in speed and damage with style points gained from leveling up.

But enough about details, how does combat actually feel? Shallow. But because that’s far too brief of an answer, I’ll explain. Strategy isn’t necessary at all, but it’s a tad short of God of War style button mashing. So what we’re left with is an awkward hybrid of slow, methodical movement and weak combat mechanics. Fighting is a way to further the story and give you something to do. I didn’t groan when a fight popped up, but I certainly wasn’t rejoicing either. It was the customization that I enjoyed; watching as my character found more and more powerful fighting styles and upgrading them to ridiculously overpowered levels.

Now, I’m a big supporter of the aesthetics over graphics argument, and I would normally be explaining that this game was released about 7 years ago, so it doesn’t look the best. But I don’t think that’s necessary, because this game still looks amazing. Sure, it’s not quite the same level as some of BioWare’s recent work, but I was astounded by the level of detail on characters and the environment. The people I met were instantly likeable and I found myself looking around, enjoying the scenery, as I traveled between towns. That’s not to say that I didn’t encounter any problems, though, as I did notice some random slowdown and the seams on characters’ arms were visible, but these are tiny problems. 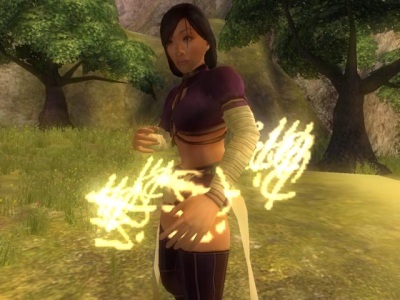 I honestly shouldn’t even have to mention the story of this game; all you need to know is that it’s made by BioWare. These guys make some of the most captivating stories told through any medium. Jade Empire is no different; it’s full of twists and turns, with healthy doses of lore and mythology. I was a bit disappointed with how linear it all felt, but since I could choose how the story plays out, I had a reason to come back and try seeing how things could have happened. The only other problem I had is concerning the conversations; there are too many. I understand it’s one of the main ways Jade Empire conveys its story, but for anyone who’s uninterested in listening to line after line of dialogue; it’ll be a major turnoff.

Choice also plays a big part, and what kind of hero you want to be is up to you. While you may never be truly good or evil, how you choose to get things done is entirely up to you. Many quests allow you to listen to a character’s plight and choose a response. You could kill him and take the reward, help him and ask for nothing in return, or even do it grudgingly and demand recompense. I would have liked to see more layered moral choices, as most were black and white, but it was still nice to have the options.

But stories are only as effective as the way in which they’re told. In movies, the actors must convince the audience of the weight of the situation. In books, the writing must pull the reader in, creating an entire world full of believable characters. And in Jade Empire, it’s the voice acting and music turning simple NPC’s into friends and foes, and levels into events and adventures. Jade Empire nails both of these with excellent voice work and a beautiful oriental score. The main character (whether male or female) remains silent throughout the adventure, but all other major and minor characters are fully voiced. Even though I’m not an expert, I can say without a doubt that thought and effort were put into these sounds. A mini-language was made just for a few lines of dialogue and the musical score for this game was released on CD! These guys were proud of their work and it shows. 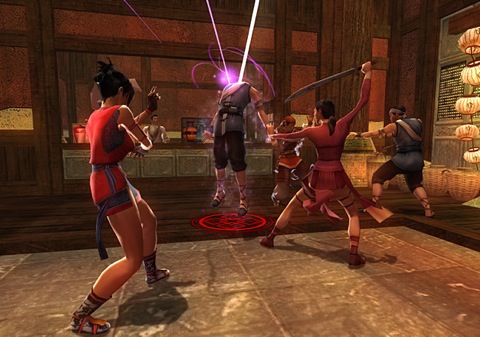 As a game, there has to be some form of interaction, even if the focus is on the story. And to interact, you need to control. Jade Empire doesn’t do anything unique here and just about anyone can jump in and enjoy the adventure. Playing on the Xbox 360, I didn’t have any problems with odd button mapping, controller lag, or stiff movements. When in combat, the camera automatically locks on to the nearest enemy, but can be moved to other enemies with the left and right triggers. Or, if you prefer not to be locked onto a single enemy, pulling both triggers will unlock the camera.

There are plenty of events and stories in Jade Empire: some good, some bad, and some I wish were never told. When originally released on the Xbox, the ESRB rated the game M for Mature with blood, gore and violence. Subsequent releases included intense violence, mild language, and suggestive themes as well, but I still don’t think this is enough. Not only is alcohol mentioned, one of the fighting styles forces you to drink in order to use it. Violence is common, and normally clean, but when gore and decapitations appear, they’re everywhere. Blood spewing like a fountain, cannibals cooking humans stripped of flesh, and murdering innocents more than earns this game the intense violence, blood, and gore descriptors. Language is also a (unwelcomed) surprise, though not as intense as the violence. It’s about as bad as darker PG-13 movies with a**, h*ll, and b*st**d used throughout. Sexuality, though far more subtle, is also present in the game. Near the end, sex (both straight and lesbian) with multiple people (at the same time) is possible, but off-screen, and one character’s clothing is slightly revealing. In addition to the ESRB listed items, many supernatural/religious/occult characters and abilities exists within the game’s world. Demons, ghosts and sorcerers compose most of the problem, but the player’s character can also use magic and multiple gods are spoken of during the adventure. At one point in the adventure, you even meet one of these gods.

Jade Empire is as much a story as it is a game. If you don’t want to listen to a story or would rather prefer Diablo-style looting/upgrading, this title isn’t for you. After finishing this game, I have the same feeling I had when I finished Fable III: a fun adventure, worth playing twice, and then shelved and never touched again. For $15, there’s enough content to make this worth a purchase, as long as you don't mind the myriad of moral problems, but don’t expect it to last you as long as Final Fantasy or The Elder Scrolls.