Your eyes open. You’re on a beach. You look down at your tattered clothing, and you can’t help but notice that everything you owned, everything you carried, is gone. You have nothing with which to defend yourself from the world around but your two blocky fists. You need to find shelter before nightfall, but you have no shovel, no axe. You see a tree, and walk to it. You need tools, and the key to making them lies in its wondrous square logs. With no other choice, you begin to slam your fists into the trunk again and again. Your knuckles should be bruised and bloody, but your hand-cubes stay strong. In just a few moments, the tree is reduced to mere floating blips on the ground, and with a few odd popping noises they fly into your backpack. Now, with some basic supplies, your adventure may begin.

These are the first moments of every Minecrafter’s life. There are no real spoilers to this game, because you are free to do anything you want. Fancy yourself a mile-wide castle? Just maintain the patience of gathering materials. Want to discover the riches of your world? Explore the winding caves that snake through the ground under your square feet, or perhaps dig down to the very bottom of the world and mine away to your hearts’ desire. Nightfall brings darkness, and with it come hordes of terrible monsters that will satiate your appetite for adventure. Also available to those who consider themselves warriors is the Nether, a hellish and demented world accessed via a portal, and the End, the aptly-named endgame world featuring legions of Endermen and the fearsome Ender Dragon. There is even the option of growing wheat, pumpkins, and watermelon for those who like to farm, along with animal breeding.

What really makes Minecraft great is the sandbox gameplay. You can do all of the aforementioned tasks in a “legit” fashion, gathering materials by hand, or enter the game’s Creative mode and receive instant and unlimited access to any material. A quick YouTube or Google search will show both the least and the most imaginative works by people in the Minecraft community: some are content to live in their mud huts, while others prefer a cushier lifestyle in their golden throne rooms. In that respect, the replayability of the game is virtually endless—so long as one can keep the imagination flowing, of course. The gameplay is, sadly, occasionally affected by glitches and bugs, but almost all of them are more than outshined by the fun of the game itself. 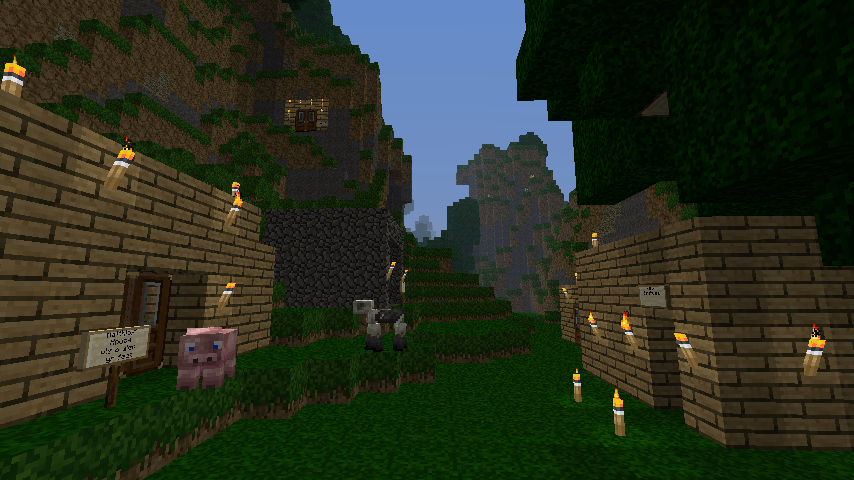 The Minecraft community is an incredible resource for those who get lost at some point in their adventure. Because the game has no tutorial, many have taken it upon themselves to create resources for others. The community is also a vast source of resources with which you may change your game to suit your preferences. Texture packs, adventure maps (downloadable maps with a set task or plot), modifications, and general inspiration for building are all examples of community efforts. People both on the official forums and YouTube have created both visually awe-inspiring and technically impressive creations, and there are multitudes of servers to join others. Multiplayer is an especially important part of the game, for it makes large projects easier to take on and allows others to see your creations in-game. Towns spring up around impressive geological features, and community projects can be awe-inspiring. More importantly, it’s just plain and simple fun. Think of it as grown-up Legos, except filled with things that want to kill you.

The technical breakdown of Minecraft is where the game begins to show its more frustrating side. The controls are the standard WASD format, though this may be changed via the in-game menu. The game is also quite buggy at times, and much of the gameplay feels unpolished, especially for an official release. Things that seemed acceptable in Alpha or Beta release, which included occasional visual glitches, animals bugging out and shifting over fences, and other minor bugs, plague the game. However, the game is regularly updated and many of these bugs are in the process of being fixed.

It’s not an especially inspiring game musically, but the sounds fit with the overall feel of the game. Most of us who have played the game have come to love the satisfying “thump-thump-thump-thump-thump-thump-POP” of mining and the odd crunch of grass under our blocky feet. There are musical records that can be obtained in-game, and these can be played on player-crafted record players to add additional atmosphere to the game. 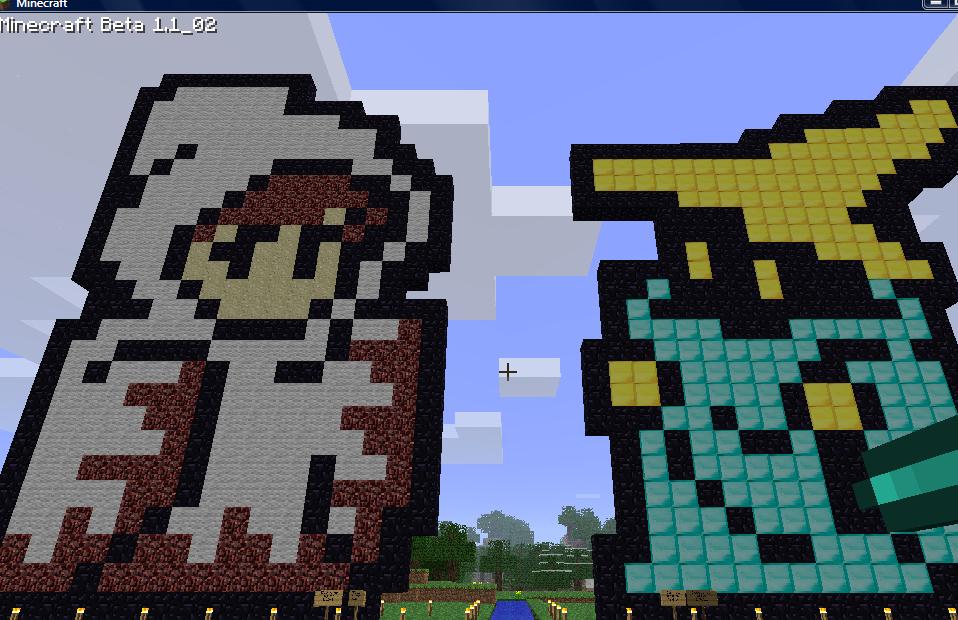 Graphically speaking, Minecraft doesn’t have much room to boast, either. It must be remembered that the game is intentionally blocky and sometimes even cheesy: even the watermelons grow into cubes. That being said, the graphics are still fairly unimpressive nonetheless. This is especially annoying when the fairly steep system requirements are taken into account. When I bought the game, my laptop was under six months old. However, I had to keep the render distance on “short” so the game wouldn’t lag. Toning down the graphics settings can drastically help this, but such an action detracts from an already lacking aspect of the game. One’s visual experience can also be improved through the use of community-made texture packs and mods.

As for family-friendliness, I would say that Minecraft can range anywhere from Legoland-Innocent to Fighting-Cartoonish-Monsters-Violent. There are monsters, undead and otherwise, that live in caves and spawn on the surface at night. However, all of these can be removed from the game by changing the difficulty setting to “Peaceful.” You don’t even have to kill animals for food if you’re of the vegetarian persuasion, provided you grow watermelon and wheat.

There is no sexual content or swearing in the game, but multiplayer experiences may vary. Some servers have very lax rules and do not regulate players' language or behavior, but there are a number of Christian servers available to play on, including ours, which can be found at http://prism.ccgr.org.  Our Minecraft server is hosted through Bisect Hosting.

Occult references don’t exist in the game per se, but there is an accessible dimension called the Nether. This can only be accessed by gathering Obsidian to make a portal, which then must be lit with fire to activate, so it is entirely avoidable. It is essentially a hell realm, containing vast seas of lava and darker creatures than are found in the normal game world. Magic is also present in the game, but is only used to enchant some items and to craft potions.

This game has given me more hours of gameplay that most of my other game purchases over the last few years combined. I would actually be reluctant or embarrassed to release my total numbers of gameplay, but that is an evidence of the addictive nature of the game. It was around 20 dollars when I bought it at Alpha release—it is now around $26—and it has given me more satisfaction than most of my 40 or 50 dollar game purchases. All in all, when deciding on whether to purchase this game, consider this: if you need a structure, a plot, or even a basic structure in a game, avoid this at all costs. However, if you have an active imagination, have a mind for construction, enjoy flexibility and freedom, or even just want something to kill time, Minecraft can offer something for everyone.