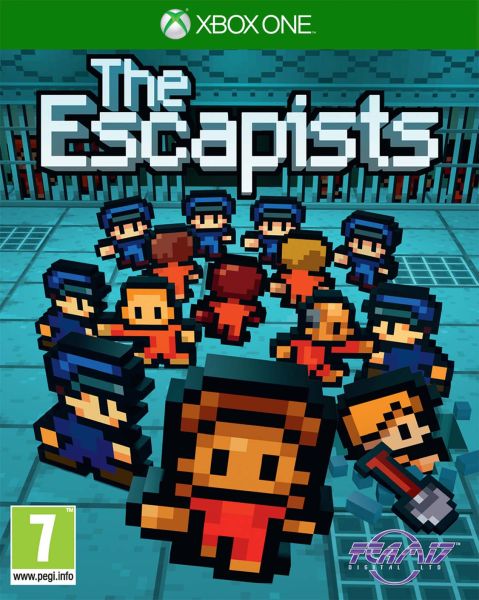 There's not much of a back story in The Escapists.  Little explanation is given as to why you start off in a minimal security prison, but you're there and it's your goal to break out.  While you could have been a fairly decent person before entering prison, in order to leave you'll have to break lots of rules, disrespect authority figures and possibly stab some people in the back both figuratively and literally.  Don't let the simple 2D sprite graphics style of this game fool you, it's a pretty complex prison escaping simulator.

As you go through your daily routine, your ultimate goal is to find a way to escape the six prisons (ideally without getting caught).  If you do get busted, you can expect a good thumping or a few days in solitary confinement.  The guards and inmates have opinions of you. If they're low, they will have a short temper and beat you up with little provocation.  If you're on good terms with inmates, they will be willing to sell you various forms of contraband.

You can store some items in your cell, but there are random cell searches every day and if your name is called, you better quickly flush the offending items before your cell gets tossed.  Many items by themselves are harmless like socks and soap, but when you combine the two, you get a crude sock mace.  Using a battery instead of soap makes a more powerful mace. 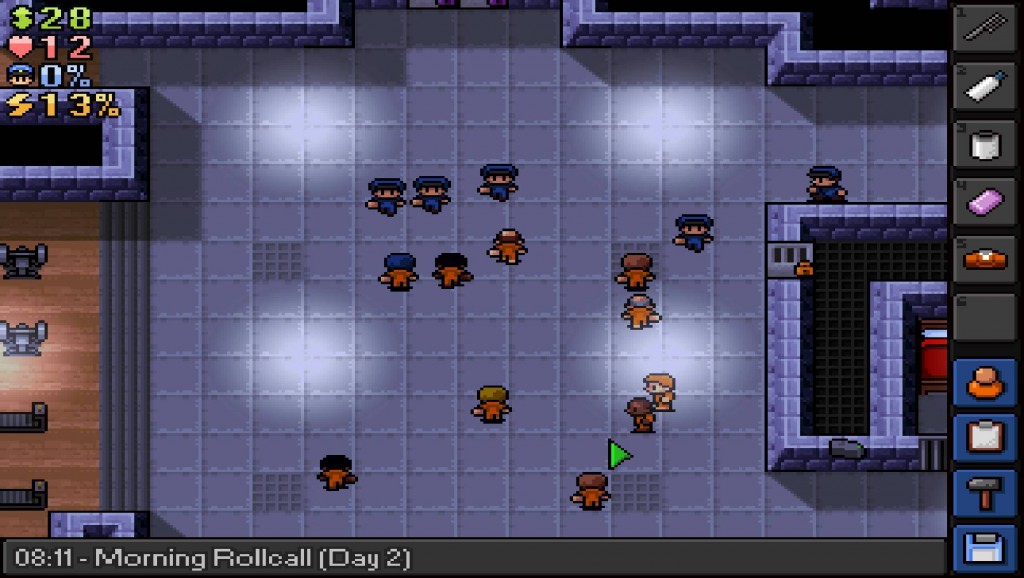 Strong Points: Amusing dialogue; random encounters; challenging escapes that get harder as you progress in the game
Weak Points: Xbox One version does not get the DLC offered to the PC users; dated graphics and clunky interface make this game harder to navigate
Moral Warnings: You'll get beat up by inmates and prison guards; sexual innuendo

Other craft-able weapons include shivs, shanks, bats, whips and nunchucks.  Not only do you need the items to craft, intelligence is another factor to take into consideration.  In order to boost your intelligence, you'll have to browse the internet or read books in the library.  Your speed and strength attributes can be increased during the mandatory workout session using the treadmill and by weightlifting.  After the workout, taking a shower is required.

Given the 8 bit graphics, there isn't much to see when the inmates are not wearing their prison jumpsuits.  Even when they're naked they still appear to be wearing underwear.   While there are random comments and conversations throughout the game, the shower ones cracked me up the most.    Some of my favorites were "Are you enjoying the view?" and "Hallelujah! It's raining men!"

The meal time comments  regarding the food quality are a close second in the funniness factor.  In the cafeteria you can grab plastic utensils and a tray of food and eat it to recharge your stamina.  Somebody usually gets beat up at mealtime and you can often pick pocket the unconscious prisoners.    If a guard catches you in the act, you'll wake up in the infirmary.  Prisoners and cops have status colors and icons above their heads.  If their name is in green you're on good terms with them.  Yellow means neutral, and red means you better watch your step.  If a prisoner has a yellow money bag above their head, you can buy items from them and a green exclamation mark means they have a job request for you. 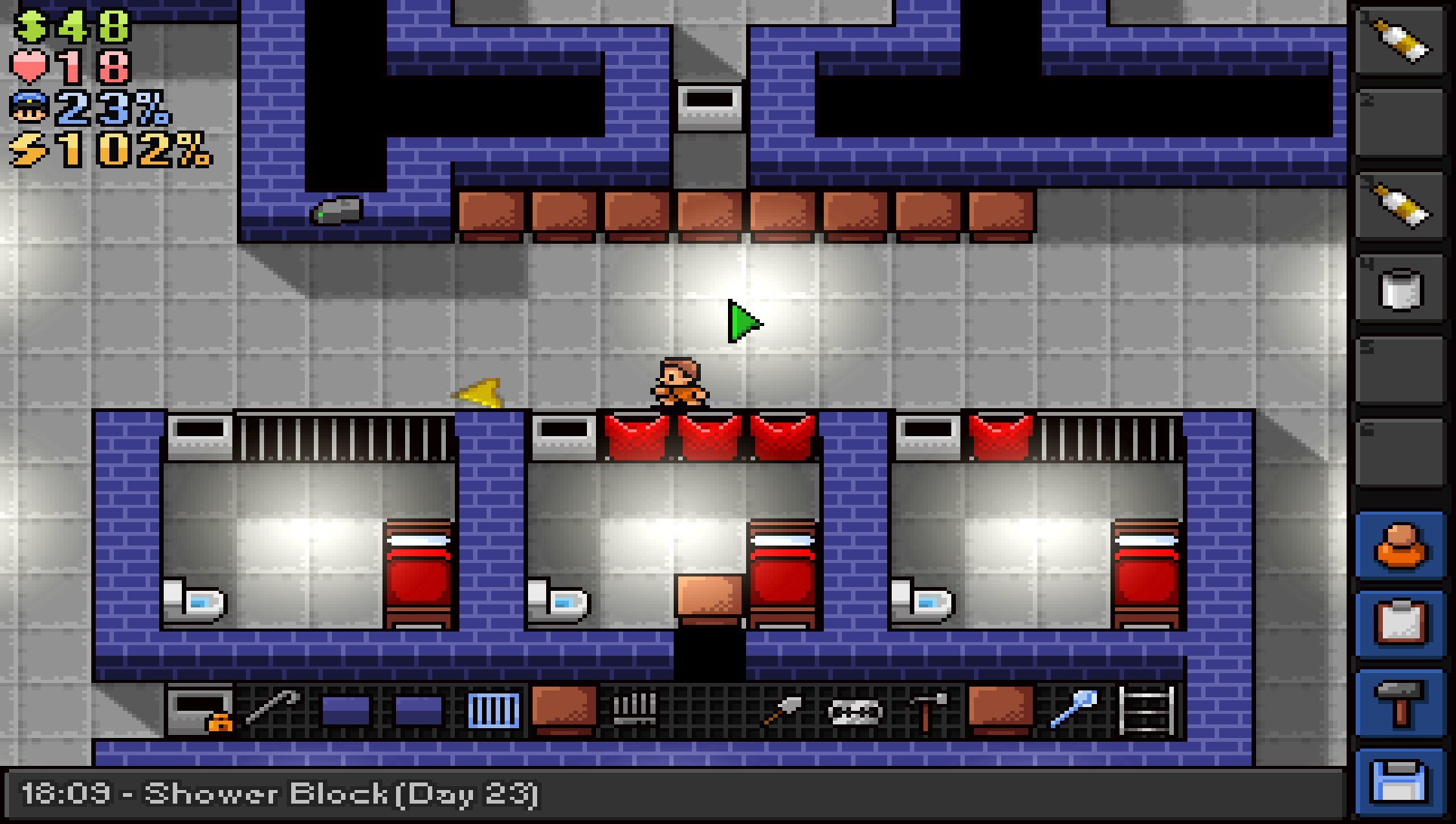 Job requests can earn you money and boost your reputation with them.  The requests vary from acquiring items to picking fights or distracting prisoners and guards.  Besides quests, you can earn money by doing your prison job.  These prison jobs include laundry, mail delivery,  mopping floors, and metal work.  Money earned can be used to buy contraband or tips by using the payphone.

Since there are websites that have the crafting formulas freely available, I recommend avoiding the payphone hint system. Escaping the prisons is tricky, but doable.  You'll have to stealthily dig and cover your tracks, and get familiar with the air duct system.  Later prisons in the game have contraband detectors so you'll have to think of crafty ways to transport your coveted possessions.

The Xbox One version of The Escapists is more expensive and has yet to get the DLC offered to the PC players.  For that reason alone I recommend the PC version over the console one.  New prison challenges like Alcatraz are well worth the extra dollar or two.  While The Escapists is fun, I find the game rather expensive and recommend picking it up on sale instead of paying full price.  If you don't mind playing a game about breaking out of jail, of course.