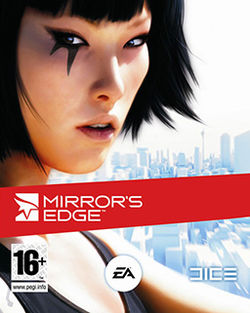 EA isn't one to take a whole lot of chances with their game production, as they usually stick with standard-issue shooter, sport, and racing games. They took a huge leap with Dead Space 1, 2, and 3, and they took just as big of a leap of "Faith" with this title, based entirely on the art of Parkour and pure, simple speed. Mirror's Edge is an amazing game all around, but its short story and lack of bonus content hold it back from the stellar game it could have been.

Mirror's Edge is all about "Runners". These "Runners" are extremely agile free-running specialists who deliver packages to different clients around The City, a futuristic paradise with a dark side. Communications and broadcasts are constantly monitored, leaving the only way to communicate without the “Blues” (the title's version of the police) or shadier organizations cracking down on you is through the use of Runners. Our protagonist, Faith, gets wrapped up in a highly political murder case shortly after being “reinstated” after a bad fall. This is where the story comes up short. You know Faith has a bad fall, but why? This game can be pretty vague on plot moments. Certain characters, a man named Jackknife for example, seem to pop up out of nowhere. Why is he important? Since when do we know him? The story falls flat in that aspect, but the story that does come through is well worth paying attention to. In essence, it's the story of a savior: Faith is willing to do anything to save her sister who has been arrested for a murder she did not commit. Faith spends her time through the short 9 mission game (it could probably be completed in seven hours or so) finding out the reasons behind it, and how to save her sister.

Faith's voice actor (Jules de Jongh) plays her role spectacularly, though you don't see her as vulnerable. The oh-so important free-running mechanic the game is based upon works brilliantly most of the time, and Faith has an enormous repertoire of moves to utilize: wall running, vaulting, sliding, and the classic wall jump will be chained and used in unexpected ways to get you to your goal. Fluidity is key; the system is simple but efficiently done, using the shoulder buttons to either jump or duck, with the control stick or surrounding environment giving context to the technique Faith uses. Unfortunately, it isn't perfect: occasionally, it will fail at the most inopportune moments. For example, jump towards a ledge with plenty of room to grab it, and Faith will fail to catch it sometimes. Given the fact it tends to happen when you're a few hundred feet from the ground, it can be a problem. Luckily, the rather gentle checkpoint system means you'll only by set back by a minute or so. The fail rate isn't at the point of enraging, but it is also not great for a game that's based on speed and precision. 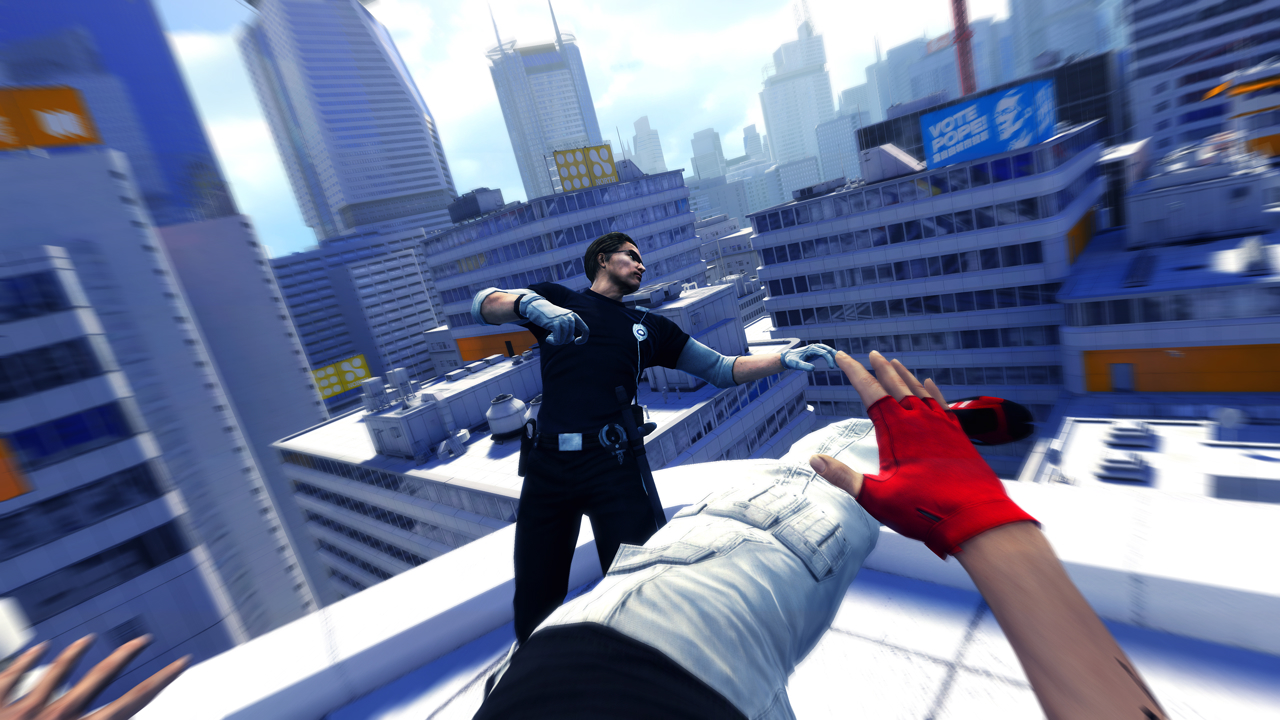 The game also falls a little bit short with the enemy design. There are two character models for each of the four varieties of enemies: a bald guy and a not bald guy. I feel DICE and EA definitely could have used a little bit more creativity in the model design, especially given how good the graphics otherwise are.

The AI in Mirrors Edge won't be winning any intelligence awards either, as long as you don't run head on into a group of SWAT, that is. Faith wears street clothes, and they aren't made of Kevlar; in accordance with this, her combat skills fall more under martial arts than gunplay. The game also emphasizes divide and conquer tactics, since Faith can usually drop a single enemy like a sack of bricks with her various punches and kicks. Unfortunately, most of the AI doesn't make it challenging anyway. Running in a circle around the battlefield will usually disperse them enough to move onwards. That being said, they do make up for their stupidity with deadliness, if you don't focus. Multiple enemies ganging up on her can end Faith's life rapidly, especially the enemies in the latter portions of the game. Handily, she can pick up a gun and blast back at them, but Faith is a [i]runner[/i], not a soldier. The guns remove her ability to run, and have very little aiming capability, not to mention she cannot reload them. Since Faith is quite skilled in hand to hand combat, this usually isn't a problem. Not to mention it is wildly fun to jump kick off of a wall and into a Blue's face.

The graphics in this game are beautiful. The City looks bleak and pale, but later on you can see the life, and the vibrant structures around you. It is put together in such a way that it's almost monochromatic, but still intensely colorful, with the buildings all solid white with bright primary-color trim. DICE did a great job with level design as well. Though most of them are not particularly challenging, they are well done and most of them have simple little puzzles in them. When you aren't being chased by a helicopter or six armed gunmen, you'll often find these small puzzles that make you look around and think "How do I get to there from here." I loved these sections; it makes you carefully think how to chain together Faith's various acrobatic skills in order to reach your goal, often a small obscure ledge or walkway. Have no fear; the game has a built in 'map' function, that will point Faith in the right direction with a simple button press, meaning you're unlikely to become lost forever. In what I would consider another golden move, the controls for Mirrors Edge are very simple. Much could be said for the soundtrack, as well. It's mostly electronic and futuristic sounding, is fast-paced and adrenaline-pumping when running or fighting, but during the puzzle portions it switches to a mellow, thought provoking track. I also find myself frequently humming the ending them, which ironically is titled “Still Alive”, another song I often find running through my head. 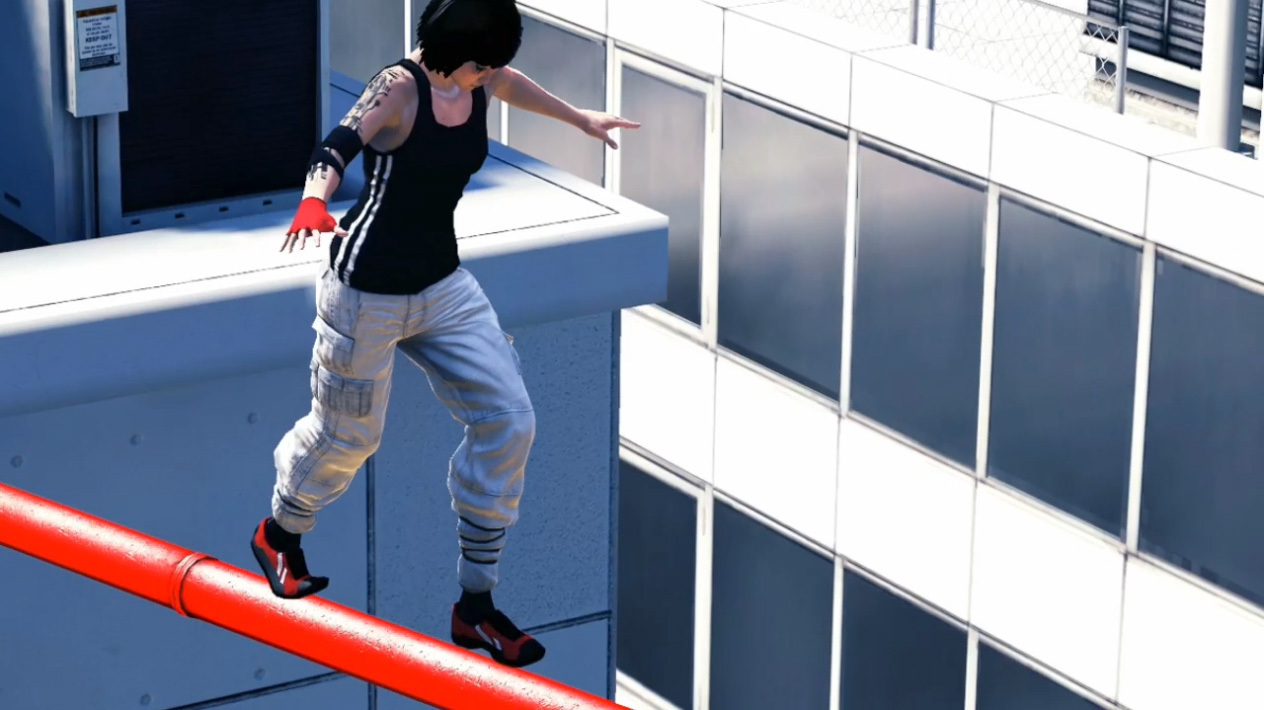 Sadly though, once you finish the story, there's very little left to do in Mirrors Edge. You can replay the game, or individual levels, on a harder difficulty just for fun. You can also replay the levels against your friends with timed checkpoints, go through a challenge mode (which rates you on speed and fluidity as you complete the levels), or try to get your name up on an Internet leaderboard. In my thoughts, Mirror's Edge should have been an open world adventure; for all the openness it provides, it also feels restrictive as there's pretty much only one or two ways to do something.

Morality-wise, Mirror's Edge is what you would expect from a T-Rated game. There's a small blood streak on your screen when you are shot, but it fades quickly. Oddly, the guns in the game sound rather weak, while punching sounds brutal. Though Faith has the option to kill humans in self-defense by picking up a fallen gun, her nonlethal attacks are often the best way to go; in any case, she doesn't go around killing innocents in cold blood. Obviously, “running” is against the law in The City, and for much of the game you're going to be fighting against (and running from) the police department, killing them if you desire (it is, however, entirely possible to complete the game without killing anyone; the Xbox version has an achievement called “Test of Faith” for just such a feat). It is worth mentioning that it is a corrupt organization, though I won't say more so as to not spoil the story. The language is surprisingly rough; every word but the F-word is used frequently, with “s**t” being the characters' personal favorite.

Though I generally try to avoid it (I can't seem to do it without stretching), I can't help but dig deep into Mirrors Edge to examine the symbolism: I mean, the idea of a character named “Faith” doing incredible things in order to combat evil, getting you over incredible heights, shadowy lows, and everything in between, in a fight against evil? By herself, though everyone and everything is stacked against her? It's almost like it was intentional.

In the end, it may be short, it may be buggy, but I found Mirror's Edge to be a stand-up game, and it is well worth your time, assuming the surprisingly large amount of language doesn't bother you. It's fast-paced, fun, and the story can be gripping. I genuinely believe it will earn a spot in the top games of the current generation, and it is definitely on my favorites list. Bugs aside, go get yourself some alone time with fast-footed Faith. I find it hard to believe you will regret it.