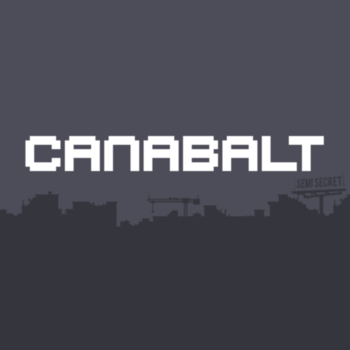 Giant robots stomp through the streets. Mysterious aircraft fly between the buildings. A bomb explodes nearby, and the office you're in begins to shudder. You don't know what is going on. But you have to get out of this place, and fast. And so, you do what you do best – run.

That is the premise of the game Canabalt, a simple game from Semi Secret Software, LLC. The player controls an unnamed man in a suit as he scampers and tumbles over rooftops, across girders and through offices in an attempt to get to safety. Along the way, he needs to leap between buildings, dodge falling bombs and break through windows. The longer he runs, the faster he gets.

The graphics are monochromatic and done in a simplistic, pixelated style. It's easy to make out your figure, as the character's coat and pants are the only black pixels used on the screen. Everything else is a shade of gray or white. The graphics are clear enough to make out what's going on, but most of the details will get lost in a blur as the game continually speeds up. The game also makes frequent use of the “shaky cam” technique, which not only makes the game a bit more difficult because it obscures what's happening, but may induce a bit of motion sickness in the player (I don't suffer from this, but the shaking occasionally made me a bit nauseous).

The music is fast-paced and frenetic, with a chiptune style that fits the game, but is not really memorable. The sound effects seem artificial, but that is probably more in homage to the nostalgic feel to the game, rather than due to deliberately poor work. 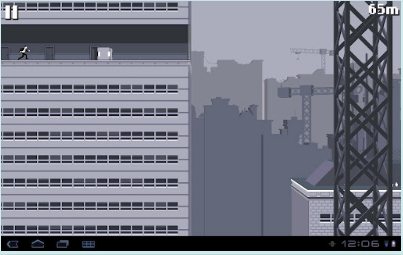 Strong Points: Fast and short gameplay allow for several games to be played in a short amount of time. Controls are responsive and simplistic.
Weak Points: Quickly gets repetitive. Odd strain on computer resources in some versions.
Moral Warnings: The character in the game dies frequently.

The controls are the sharpest part of the game. There is really only one thing the player can do – jump. By pressing the button (or, presumably, tapping the screen on portable devices) the character jumps. A tap will cause a short hop, while a longer press results in a higher or longer jump. The player doesn't even have control over the direction of the runner or the speed. The character's velocity continues to increase until the player's response time fails to be quick enough to avoid a certain death. It becomes a point of strategy to deliberately run into one of the cardboard boxes or office chairs that occasionally appear in order to slow the game down. This can lead to the character not having enough speed to make the next jump, but it's a chance the player may have to take.

The game does rely primarily on chance. There is no way to memorize the correct path to take or when to jump, because every run features randomly generated buildings, obstacles and threats. Other than the initial office hallway, nothing is the same as it was before. This random factor keeps the game fresh and prevents it from getting too predictable.

One thing that can be predicted, however, is the ending. Every run ends with the character's death. There is no way to “win” this game – the only goal is to see how far the player can travel before succumbing to an inevitable demise. While this could lead to an analysis about how this is a reflection of the human condition and the futility of man's attempts to avoid death, more than likely it's simply because this factor makes the games short and a bit amusing. The player can't help but to laugh at a clumsily-placed jump or the sudden appearance of a bomb right in front of them. The character's death is described in a simple sentence, the most graphic of which is “You have traveled X meters before being turned into a fine mist.” Even though deaths are frequent, they're not depicted in a bloody fashion.

This leads to the other problem with the game, though. With no victory condition available, the game quickly gets old. The player starts, jumps over obstacles, dies, starts again. Canabalt can be fun for a few minutes at a time, but before too long, I felt that time was being wasted and wondered what else could be played, instead. 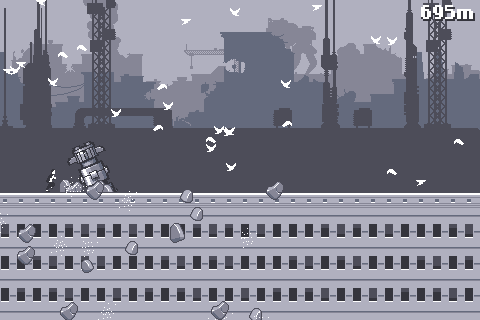 The other issue I came across – and this was an odd one - happened when I played the Flash version of the game (which operates from within a Web browser). The fans on my aging MacBook Pro spun faster, which is typically a sign that my laptop is starting to strain under the demands of its graphics card and/or processor. I've had this happen with other, more graphic-intensive games such as Torchlight or Civilization IV, so it struck me as odd that a game as simple as Canabalt would do the same. The download of Canabalt that I obtained also came with an installer using Adobe Air, and that version didn't cause my fans to spin in the same fashion. So there is something with the Flash version that seems to put unnecessary strain on my computer system.

The final critical point is about the usage of Flash in the game. The game is priced at $2.99 through various on-line stores, yet it can be played for free on game sites like Kongregate – or even on the developer's own Web site. I'm not sure why someone would want to shell out $3 for a game that can be freely played through an Internet connection. I could see the developer listing it for 99 cents and people giving that money out just as a way to say “thank you,” but $3 seems a little steep for a game as simple as this.

Canabalt is an entertaining diversion for a few minutes, but lacks substance for more than that. While it can be fun to play on the Internet, I don't think it's worth the $3 charge to download it to your computer or mobile device.