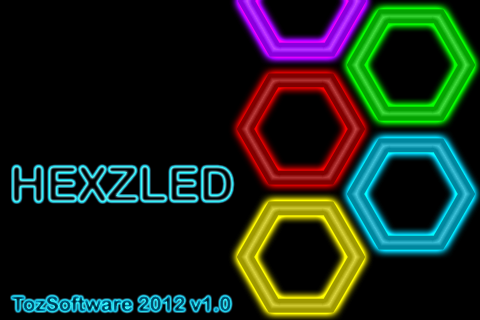 Thank you TozSoftware for sending us this game to review!

Like a quick jog or curling dumbbells for the body, I play puzzle games to exercise my brain. And the iPhone/Android puzzle game Hexzled ranges from a brisk walk to a crushing 300 lb. bench press. Some puzzles will give you a nice runner's high, others will cave in your chest cavity.

The concept is simple: change the colours of hexes until they're all the same, in as few turns as possible. As hexes of the same colour are connected, they will chain together as you change them to the colour of surrounding hexes. However, as the layout and arrangement of the hexes becomes more and more complex you'll find the method to solve the puzzle becomes increasingly intricate. 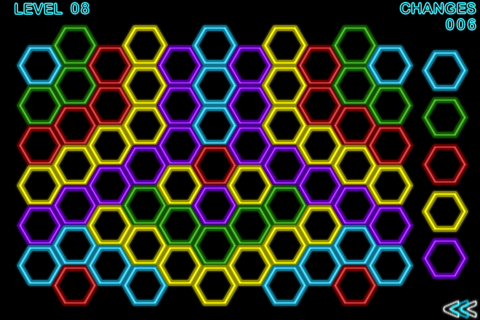 The game comes with two modes: Puzzle and Free Play. Puzzle mode contains 70+ puzzle scenarios that add new elements like timed stages that must be solved in mere seconds and fog that requires you to remember the colours underneath. Free play contains more casual puzzles and acts as a great training ground for the more difficult stages later on. Levels are constantly unlocked as you complete stages in both modes, however there is some grace as you are allowed to skip up to two particularly devious levels and move on to others. But once you get stuck on three different stages you are forced to hunker down and figure them out before moving on.

Many times, I found myself failing a stage with only one colour change left. And after 20 minutes of trying, carefully constructed strategy quickly devolves into manic button mashing and/or trial and error. To always come within one turn of finishing a puzzle but without any clue to what could've been done differently, it's quite easy to feel defeated. And without any hint system giving up in a huff is unfortunately where I left some of the harder stages. 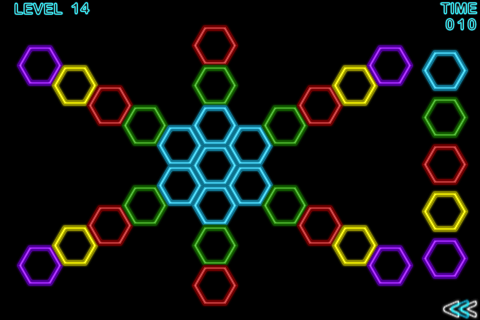 Thankfully, the touch screen controls make it a breeze to change colours and even if you accidently change the wrong hex, you can simply restart as each puzzle takes no more than 5-15 turns to complete.

The minimalist, Sci-Fi design looks great if a little too bare at times, and the neon colours are bright and pleasing to watch as the rainbow of hexes slowly become more homogenous. The music also matches the Blade-runner aesthetic with upbeat synth tracks and Tron inspired sound effects.

The absence of violence and coarse language is a great bonus, though children may quickly find the difficulty overwhelming. But for youth and adults looking to test their mental capacities, Hexled will certainly be cause to break a sweat.