Thank you Mirthwerx for sending us this game to review!

After a few hours of quality time with Catch the Monkey on my iPhone, I can say with certainty, the game lives up to the title. There are monkeys, and you catch them. The monkeys are cuddly, more so when distracted by a banana, but they're eating your crops so you'll spend a good chunk of your time scooping the apes into your arms before releasing them outside the confines of your garden.

Made in the same vein as Popcap's Plants vs. Zombies, Catch the Monkey borrows a similar feel and cartoon-y art style hoping to capitalize on PvZ's immense success. However, by competing against  one of the greatest casual games on the market, it also reveals where Catch the Monkey falls short. Unlike the bizarre, yet perfectly balanced game of chess between the conniving zombies and your anthropomorphized plants in PvZ, Catch the Monkey never strives for deep strategy. Where PvZ allows for precision planting and forethought, Catch the Monkey opts for chaos and minor resource management. Monkeys enter your garden and need to be caught and released on the other side of the fence, but you don't actively control the elderly farmer removing them. Your job as the player is to slow down the monkeys so the farmer can catch them, either by tickling them with a quick finger slide across the screen to slow down their attack on your plants, or placing distractions like rubber ducks and bananas on the field. The only strategy involved is managing your stamina, which dwindles with each action, and waiting for items to recharge. 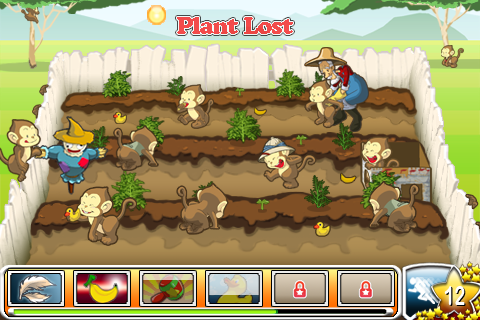 However, my biggest complaint lies in the controls, I found the tickling, your main deterrent, inaccurate at times, especially when two monkeys begin to overlap on-screen. A star pops up each time you capture a monkey, which can be used to purchase and upgrading items. However tapping on the star is not so easy, especially with the game's tricky hit detection. Sometimes it takes several attempts just to tickle the right monkey and other times I was sure I had captured the star, only to watch it float away from behind my finger. The monkeys also crowd the view of your garden, making it impossible to tell if your plant defenses are destroyed and when to replace them. Overall, while entertaining at times, the game often left me frustrated. Strategy seems to take a back seat to fast-paced chaos, but finicky touch controls leave little room for finesse.

The game also gets inordinately difficult at later levels, with multiple monkey types that are immune to much of your kid-friendly arsenal. And unlike PvZ, I didn't feel like I knew how to improve, which adds to the frustration. Soon those cuddly monkeys were as adorable as the detestable duck hunting dog for the original Nintendo, laughing as they eat your garden bare. The story itself is very odd as well, with pre-mission banter between the farmer and his wife explaining how to use new items, but interspersed between meaningless conversations about going shopping or visiting a family member. Needless to say, there isn't much motivation other than a growing annoyance over your monkey problem. 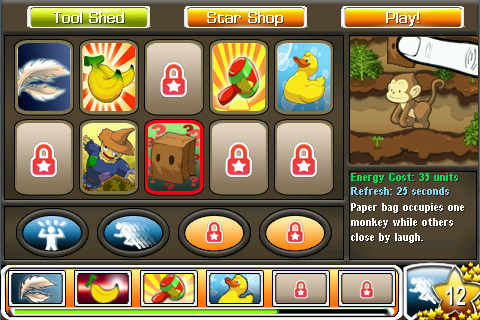 Families with young children, however, do have a lot of reasons to love Catch the Monkey. The game looks and feels kid friendly with beautiful hand-drawn animations and light catchy jungle music and goofy sound effects. The monkey's laughter is even created from what sounds like actual children laughing.  Best of all, violence is completely non-existent so parents can feel confident passing their phone or tablet to their children with Catch the Monkey loaded up.

For kids, catching and tickling monkeys will be a great distraction, fun and free of objectionable content. But with finicky controls and shallow strategy, more seasoned gamers won't find much more to sink their teeth into.