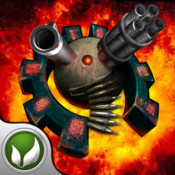 Thank you to developer Artem Kotov for a review copy of Defense Zone.

An endless line of modern military units, some still burning from my napalm, inch past my final turrets and walk off-screen to drain my health points from 20 to 12. I can only sit in the car while I wait for my wife to finish work, and re-think my defensive artillery placement. Am I defending my homeland? My family? Or am I just a lonely general holed up in a bunker trying to survive onslaught after onslaught of infantry, tanks and enemy aircraft? I suppose motivation doesn't really matter in the iOS tower defense game, Defense Zone, only preventing 20 enemy units from straying beyond the reach of your turrets.

Thankfully your defenses against the hordes are many. Using the resources you gain from destroying opposing units, you can deploy a range of turrets from the basic machine gun nest, to cryo-freezing weapons and lightning generators that slowly fry nearby units. The strategy lies in knowing the choke points to set your arsenal and how many resources to dedicate to each turret's upgrades. 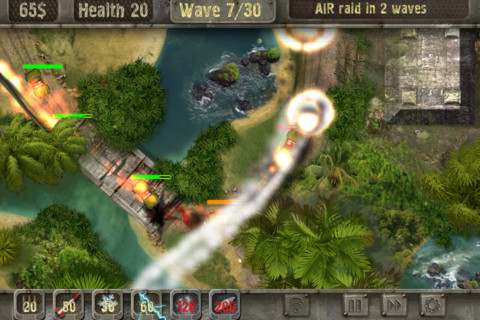 I found a napalm trap works best early in the map to slowly eat away at vehicles as they follow the winding path to my base. Electricity spouting cannons also make quick work of infantry and a few well placed rockets will keep aircraft at bay. The trick is using the limited space wisely, which often includes prioritizing upgrades over a mass of low-level turrets. And a tower defense game's true enjoyment comes from this balance of mixing and matching, which Defense Zone nails. However, the missions come in three difficulties, the hardest of which will severely test even your most elaborate strategies.

The visuals succeed as well, grabbing your attention in the ten geographically diverse maps, with everything from snowy cliffs to volcanoes and arid deserts. The beauty of subtly wafting ash or falling snow adds an interesting contrast to the mayhem and violence below. The actual animations of the enemy units are understandably of lower fidelity than the pristinely detailed backgrounds, but the smoke trails from rockets and gushing napalm effects more than make up for it. Combining the liquid nitrogen turrets with the lightning pod in particular creates a spectacular display. However, there can be some slowdown in the frame-rate when things get really hectic in later missions.

The sound design keeps the thunder of exploding vehicles at the forefront, while balancing the constant drone of machine guns, whooshing rockets and buzzing electricity. Only occasionally would the game give precedence to one sound over the other, which makes for a bizarre sight when you see a silent machine gun mowing down men. It's also helpful to keep an ear out for which turret is firing to stay informed of the action, even when you're scouting the terrain ahead or placing new units. Some occasional music would've been nice as well, even if it kept to the background and only swelled in intensity to add some extra tension during the later waves. 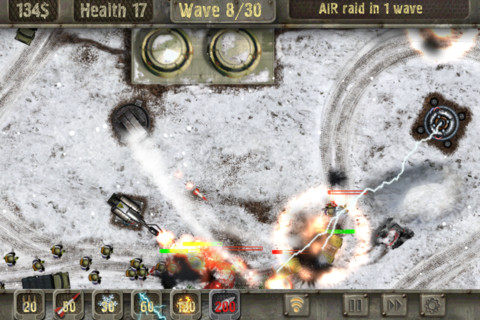 A real problem I had with the overall design was the lack of precision using a touchscreen when placing defenses. When only two turrets will fit within a space, accidently placing a howitzer, (a major investment) off center means immediately selling at a loss and trying again.

Violence is also an issue I had with Defense Zone. Vehicles explode, transforming into injured infantry, a reminder of the human lives within. Lines of infantry, I would guess sometimes up to 50 or 60, are obliterated in moments and leave a splotch of blood splatter on the ground. There are no screams of agony, but it is a graphic reminder of the violent deaths your defenses cause.

Overall, for tower defense junkies and newcomers alike, Defense Zone is a solid, well balanced, if somewhat generic choice. And with ten missions and three difficulties there's some bang for your buck. I would've liked a shred of story to frame my fiery battles. To stand out in a sea of affordable titles competing in the same genre, some motivation can go a long way.