Thank you Kokakiki for sending us this game to review!

With the timer almost on zero I stopped thinking and instinct took over as I madly tried to match up the last set of coloured pigs. "Too...many... pigs," I tell myself before jabbing wildly at my iPhone screen, initiating my final bomb to char the remaining oinkers to oblivion. "You Win" flashes across the screen. Ah, I can almost smell the smoked bacon.

The oddly named "Tweens" will instantly be recognizable to fans of Bejeweled or similar puzzle games, only with pigs substituted for jewels. While you may consider suggesting Tweens to your Sudoku loving aunt, she might want to check her blood pressure first, this coloured pig iOS game is fast and furious and leaves little room for error. 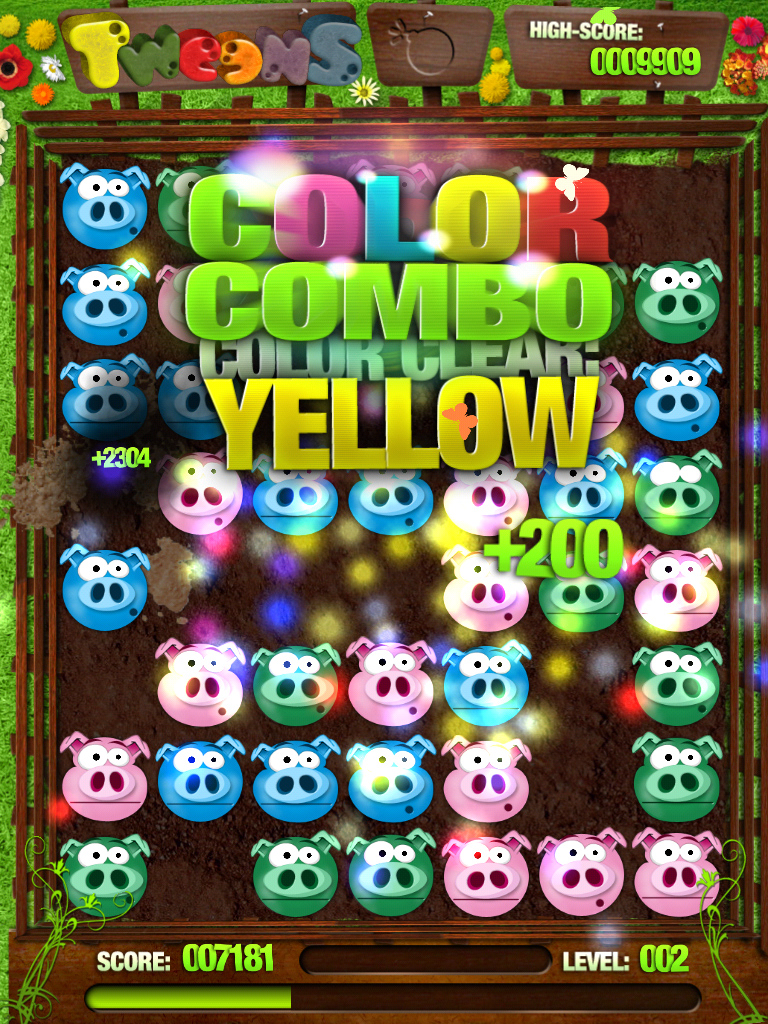 I wanted to take my time, matching pigs of the same colour, activating power-ups or planning out my next three moves. But Tweens punished me for this playstyle... hard. To be honest, my wife had to finish the first level before I believed it could be done. Thankfully, with a little practice I got a feel for it and started matching pigs whenever I got a free moment.

You begin each level with a full screen of the coloured porkers and a mission to find a clear path to each twin (or Tween?). The frenetic pace can induce panic-fueled button mashing when you can't find an obvious match but by keeping your eyes open, and matching a number of sets of the same colour, you can activate power-ups like the time freeze or rainbow mode which turns all the pigs the same colour. In later levels obstacles like immovable sheep and dogs are added, as well as more colours of pigs. Thankfully, the trusty bomb item helps even the odds, and clear large sections of the screen instantly.

The concept is simple and addictive, yet hard to master. Of the 75 total levels, I only made it into the low 20's. And while the arcade style of three continues before "Game Over" makes it easy to pick up and play, I wish a campaign mode with unlimited lives would've been included as well. 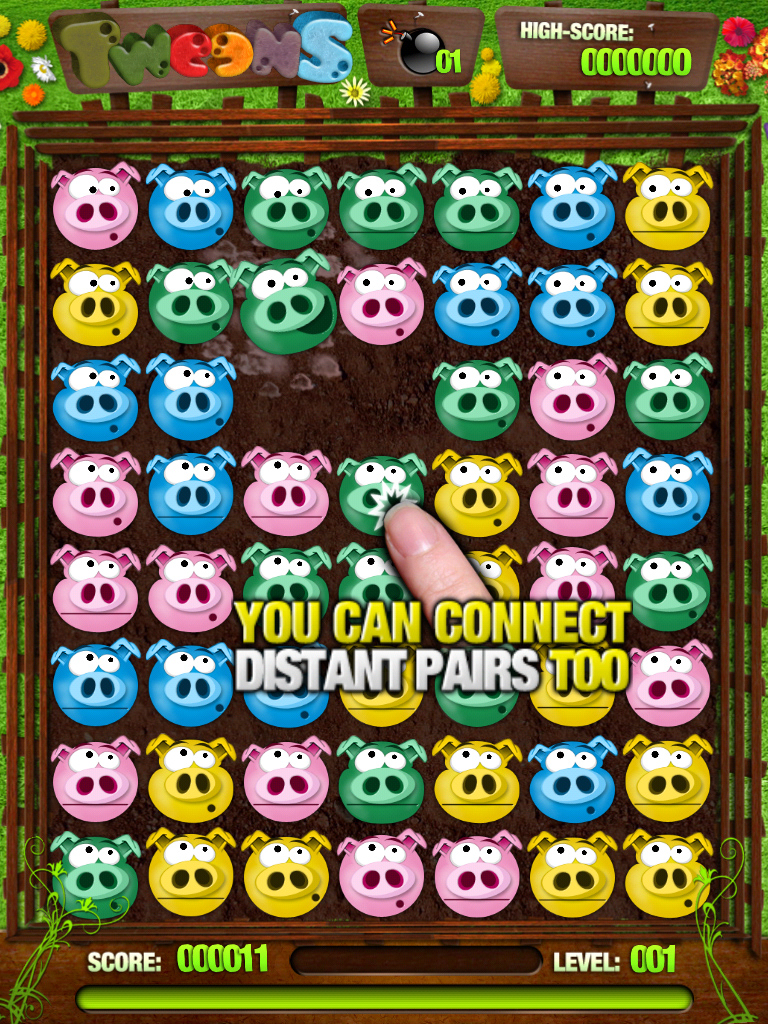 Unfortunately, the sound immediately irked me within minutes of turning it on and I consequently muted it for good. Younger players may enjoy it's harsh pig squeals and grunts integrated into the electronic hoe-down tunes, but for an old man like myself (24) silence is golden.

But perhaps Tweens' biggest strength is its presentation. With such a straight forward concept and design, I could see how Kokakiki might've been tempted to cut corners and rush the art work out the door. Instead, small touches like the stray butterfly floating by or the look of anticipation on the pig's face when he finds a twin reveal a carefully crafted game that belongs on every iPhone or iPad.

Despite quirky and often annoying sound design, the only violence involves charred pigs and the kind of cartoon bombs you'd find on Saturday morning TV. Overall, Tweens is the perfect game to load up while waiting for the bus. It's quick arcade style creates a frenetic pace and the polished presentation makes it a joy to look at. I would've enjoyed a "campaign" mode with infinite lives to eventually see the game's later levels but maybe that's what keeps gamers coming back to beat their high score. Just don't be surprised if you come home hungry for bacon.