Thank You G-DEVS.com for providing us with a preview code!

I can’t seem to stop playing action roguelites. I think what grabbed my attention with this one was the sheer amount of enemies on screen, similar to a musou (Dynasty Warriors) series. Perseus Titan Slayer is exactly what the title says. You play as Perseus, and you’re slaying titans. At first glance, it takes a lot from the Greek mythos such as the origins of Perseus, and his tasks with defeating the Gorgon, but also is going to be doing its own thing—since the main goal in the game is to defeat Hades. Poor dude just can't catch a break. He's always typecast as the villain.

After selecting either the main campaign or a survival mode, Perseus spawns in a sort of a hub where he can choose one of four weapons (only sword was available in the preview), allocate his skill points to one of four abilities, purchase and upgrade up to six pieces of equipment, and chose common/legendary perks. After getting yourself ready, there is also a practice arena where you can see how your skills, weapon, and abilities work before venturing out to slay enemies. It plays from a top-down 3D perspective similar to the Diablo series and Path of Exile.

The sword is a balanced close-ranged weapon with three special skills. Perseus can use a shield bash in a circular area-of-effect to deal damage. He also has an axe throw that shoots straight in a line. His other ability is when he calls upon Zeus’ bolt hammer to augment his basic attacks, increasing damage and range. A fourth ability is unlocked after you defeat the Gorgon. 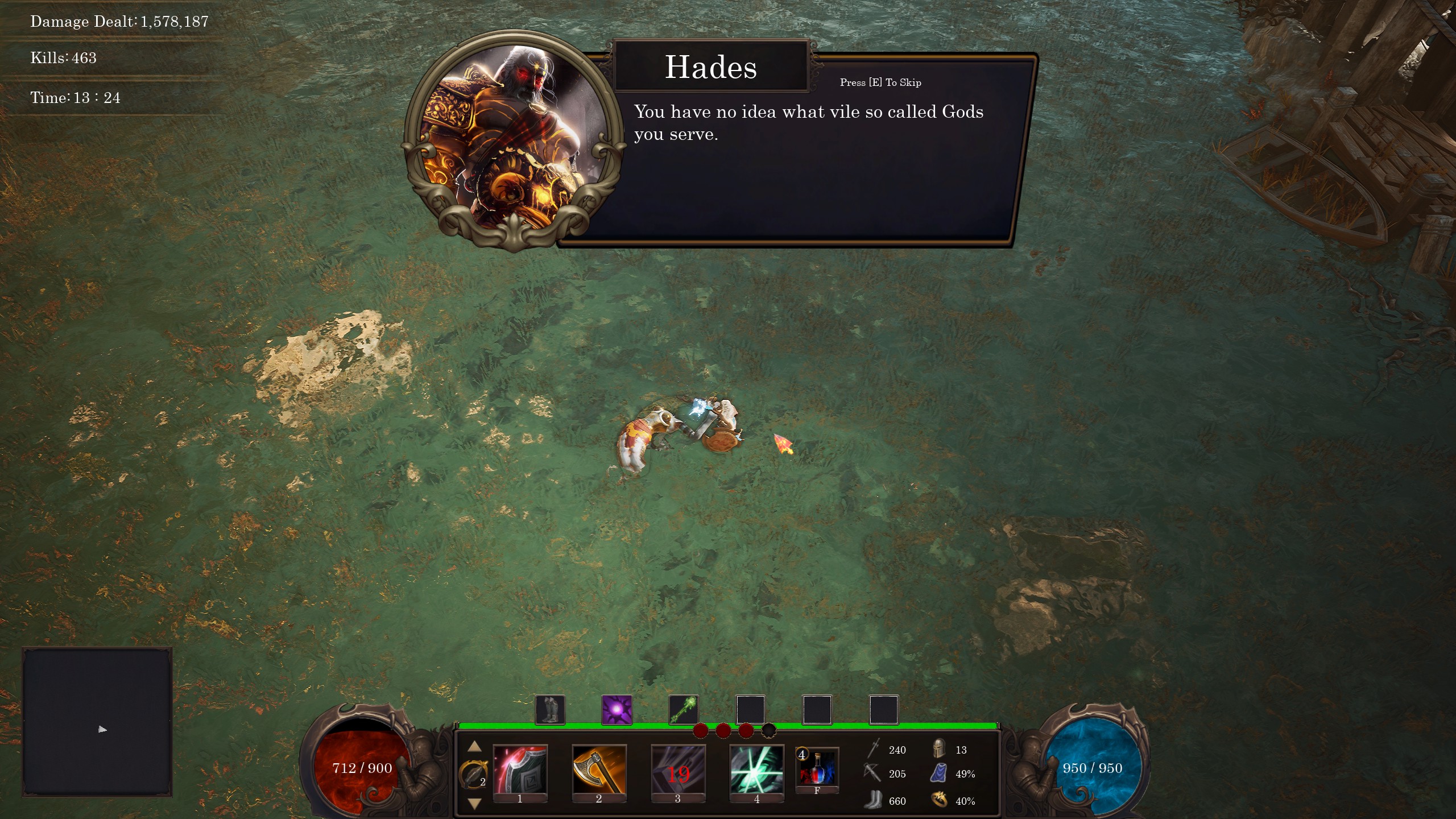 Strong Points: Plenty of flexibility and control in making your build
Weak Points: Enemy tells for attacks can be hard to spot amongst the chaos
Moral Warnings: Blood and violence; revealing clothing; setting heavily based on Greek mythology

The equipment works similarly to the MOBA genre. There is a store where you can purchase your equipment within offense, defense, and support categories increasing various stats such as movement speed, attack damage, armor, health, mana, regeneration of your health/mana, and so on. Usually, the highest tier of a weapon grants special passive and active effects such as lifesteal, two casts on each of your abilities, or chances to deal percentage-based damage depending on your max health. There is a comfortable amount of variety in these items and you have the flexibility to build toward what you like, especially when it comes to your abilities.

There are common and legendary effects that augment your abilities. Common ones simply increase the stats, while the legendary effects can greatly modiy your existing ability such as making your shield bash greatly increase health and health generation for a limited time. There are also AoE effects that have a chance to proc off of any of your attacks. When considering what abilities and upgrades you choose, there is a lot to think about in making Perseus a one-man army.

In the preview, the levels are predetermined and you usually spawn in an arena and face off against hundreds of enemies consisting of many mythical creatures like cyclops and giant scorpions. These enemies will swarm you quickly so dodging and using your abilities are key to survival. Your dodge has some invincibility frames and recharges quickly so use it as often as you can. Your sword has a decent starting range which only increases as you buy better equipment. The effects are flashy and colorful with loud sound effects for your attacks both going off and hitting enemies. The tons of enemies and the fast-paced flashy action is enjoyable while being simple to control. After defeating all the enemies, you have a chance to buy from the shopkeeper, allocate skill points, and claim an ability before moving on to the next level. Sometimes before choosing a level, you can choose a common or elite encounter. Elite encounters are significantly tougher while yielding more rewards. In typical roguelite action, you start from the very beginning if you die. 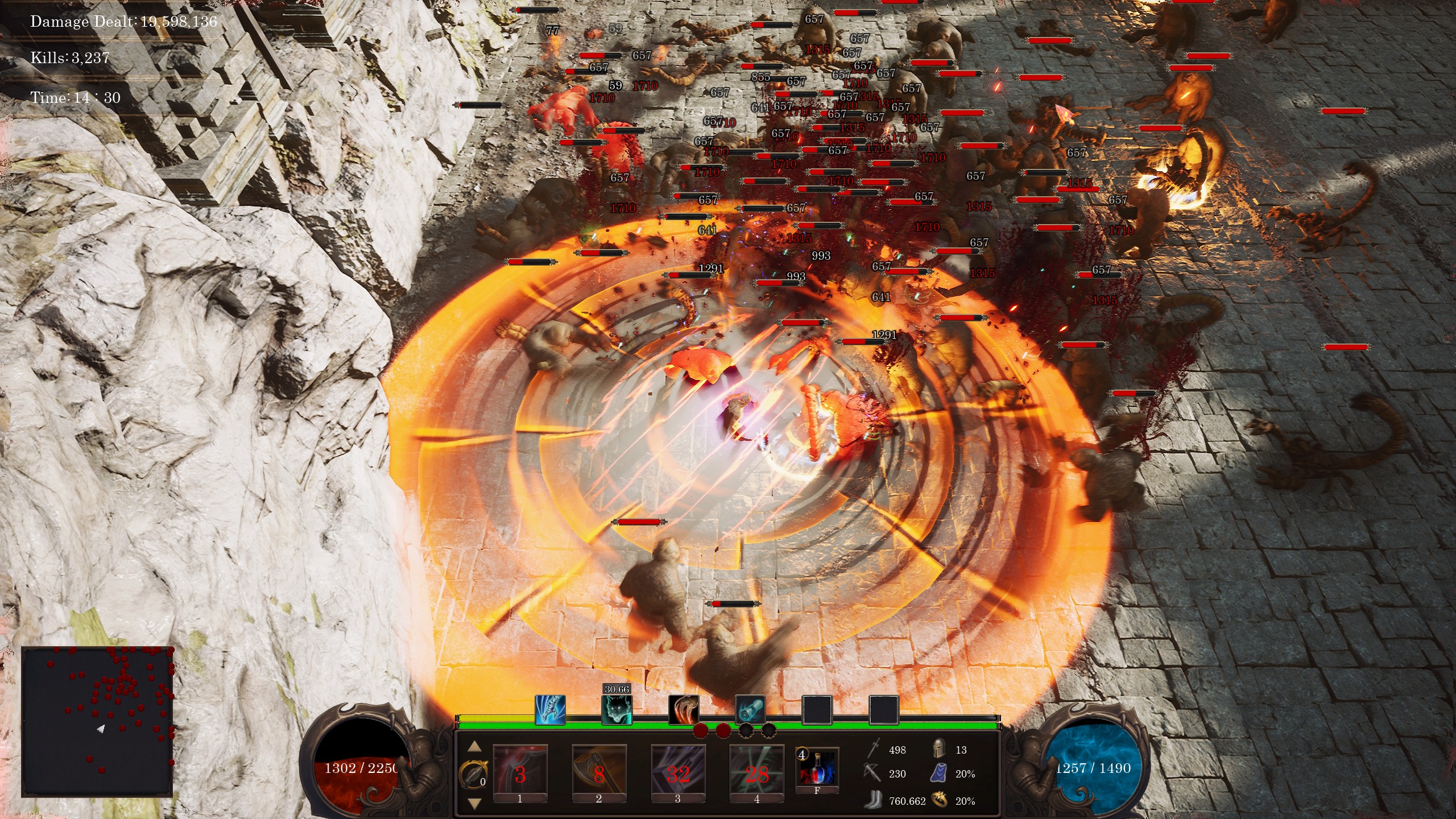 Another mode called survival is a wave-based mode where you fight until you win or die. Controls are automatic so you attack and cast abilities automatically (as long as you have mana available). It’s a quicker, more streamlined game mode when you want more “mindless” action. Defeating a certain number of enemies makes you move on to the next wave where you can upgrade your stats and buy equipment, as well as choose a common or legendary ability depending on the wave completed.

From what I see currently, morality mostly consists of violence. Enemies sometimes shed blood when defeated and there are thousands of enemies to be killed. The entire setting is based on the Greek mythos and Perseus himself uses many magical items and weapons as part of his kit. You’ll come across gods such as Zeus, Hades, and Hermes in this preview. While there is voice acting, I haven’t come across any sort of bad language. Sometimes, the artwork can be pretty revealing as there is one piece of art in a cutscene that shows the Gorgon in little clothing, showcasing the side of her breast. If Perseus Titan Slayer came out on consoles, I would say it would receive the equivalent of a Teen rating.

This trial contains around eight levels with it ending after the second boss fight. After completion, more difficulties unlock that decrease the rewards given and make enemies more dangerous. The varying difficulties let Perseus target players of all skill levels. Right now, Perseus Titan Slayer shows promise, and depending on how the procedural-generated levels are in the full game, as well as the other weapons/abilities, it could become one of the more standout action-roguelites. There are some issues such as the cursor being red, and most abilities and effects also being red so it’s easy to lose track of your cursor in all the actions. It also doesn’t run the best as I can have frame dips into the 30s in the most intense of situations. A trial will be available for Steam users sometime in November while the full game comes out in early 2023.