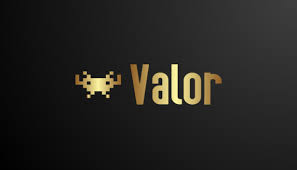 Thank you Open Mid Interactive for sending us a review code!

Valor, the hack-and-slash arena shooter online game, allows you to fight enemies to the death until you’re the last person left standing. Valor was released last year, October of 2021, in Early Access on Steam. Now, the full release of Valor is November 23, 2022 and out of celebration, there will be a new and competitive game mode added, called the Valor November Championship. This does not indicate that any updates will be coming after the Valor November Championship.

Now, let me discuss the first flaw I noticed about Valor. Starting off with the title of Valor, this is not the online multiplayer game, Valor, released back in August 3, 2021 (developed and published by Sillybilly2454). This is not the space action RPG (role-playing game) Star Valor that was released in August for the PC or the 5v5 character-based tactical first-person shooter, Valorant, released in November 4, 2021 for the PC. An unaware parent that is buying a video game for their child may even confuse the game Valor for Men of Valor, Legends of Valour, and Arena of Valor. I wouldn’t be surprised if someone picked up the action movie, Act of Valor (2012) by an accident, with the unfortunate hopes and dreams to play the Belgian developer Open Mid Interactive’s Valor.

The main screen has the options of the PLAY tab, GLADIATORS tab, GADGETS tab, LEADERBOARDS tab, SETTINGS tab, and QUIT tab. My rank on the leaderboards is determined by the amount of glory I have and the way to earn glory is by completing levels in the same environment or by reaching new high scores in the Evolution and Gauntlet game modes. The amount of glory that a gladiator has can eventually put them in the Hall of Fame and there are numerous levels to complete and times to upgrade your gladiators, which is another reason why Valor is re-playable.

The Gadgets tab allows me to see the Affixes tab, Weapons tab, Zone tab, and Skins tab. Affixes show the modifiers that complicate the gameplay (like an icy surface that makes it harder to move, plants that fire something at you, or circular saws that go back and forth). Weapons show the weapons you own, Zone shows what environments are for sale, and Skins show what skins are for sale. For each Gladiator, the SKINS section has another section on the right side called PARTICLES, where there’s some unlockable PARTICLES called GLORIOUS GREEN, GLORIOUS BLUE and GLORIOUS PURPLE. 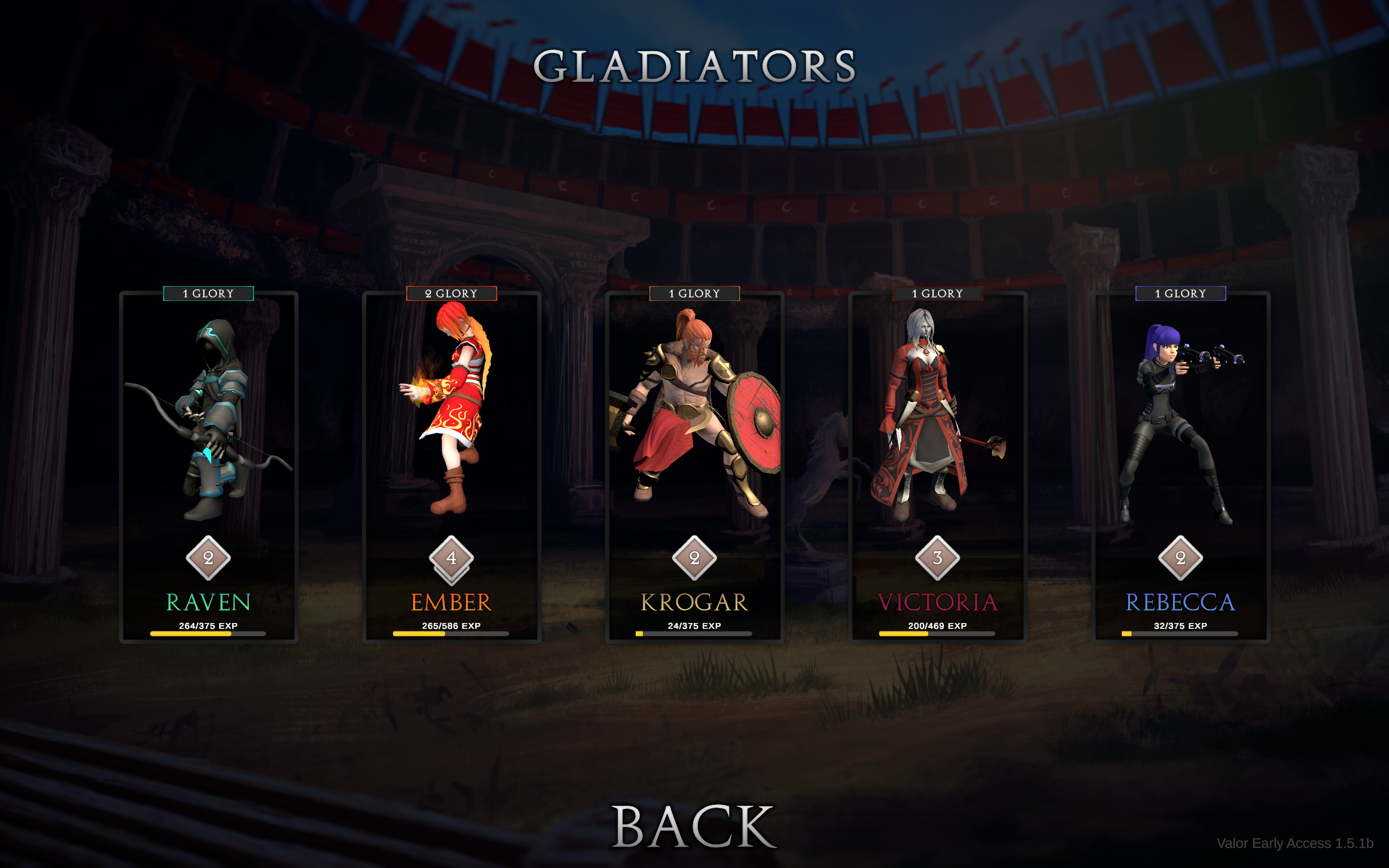 Strong Points: Controlling the characters is easy; you can earn points even when you lose rounds
Weak Points: Most of the environments and enemies look the same; there could be more attacks added
Moral Warnings: Violence; Magic use; Occult references

Once I clicked the “Play” button, the screen takes me to a world map and the first task is the Training Grounds. I went into battle mode where I had to shoot at different thugs in order to complete the level with a completion time of 37 seconds. There was 1 out of 6 enemies to eliminate. The screen celebrates the completion of your task with the words “VICTORY,” then below that, “BOOYAH!” The amount of enemies that arrive can at times feel endless and that is by advancing different levels and they won’t stop until the countdown on the timer ends.

There is an option to retry each level, which is a relief. At the boss fight in Training Grounds, each time you lose, you gain a stack of Disappointment, allowing cannonballs to fall from the sky, forcing you to dodge them. This is a creative method to have fun, but also as if done by some sort of supernatural force.

A screen shows up where I can pick a Gladiator. There are 5 playable Gladiators to choose from: Raven, Ember Krogar, Victoria, and Rebecca. Each of the Gladiators have a different skilltree with 4 weapons per Gladiator. What I appreciate about Valor is that you do not have to start over the game just to choose a different Gladiator and can just choose one at any time.

Out of the 5 Gladiators, I chose Rebecca, because she looks the most modern with purple hair and a ponytail and owns RAYGUNS. The unlockable weapons for Rebecca are the X-300 PISTOLS, PHOTON BLASTERS, and TACTICAL MK 2. The weapons that Rebecca owns, give the character a futuristic appearance, as if she’s from the movie, Weird Science (1985) and the Back to the Future series. As for the TACTICAL MK 2, the “MK” stands for mind control.

Later, throughout the game, I wound up choosing Ember (who has pyrokinesis) with fire visible erupting from her hands. Pyrokinesis is the purported psychic ability allowing a person to create and control fire with the mind and is an ancient occult practice in many Pagan religions.

Raven (who wears a black cloak with bluish-green sections) has the ability to quick dash, recall VAMPIRIC ARROWS, or fire them scattered. He has abilities that you have to unlock like SOUL CONVERSION (which is when an enemy dies, he heals a percentage of his maximum health), SOUL STEALER (which is when an enemy dies, they leave a shadow residue behind), TRINITY (which allows 3 center arrows causing more damage), and EGOCENTRIC (allowing the center arrow to cause 50% extra damage). The shadow residue for SOUL CONVERSION may remind someone of an evil spirit while the upgrade TRINITY is blatant blasphemous, disrespecting the Father, Son, and Holy Spirit. Having an upgrade named TRINITY when the upgrade is violent is automatically blasphemous. Krogar is a brawny brute, yielding a round, medieval shield and a Mjollnir (which is the hammer of the thunder god, Thor). An unlockable upgrade for Krogar that I think is humerous is the MITHRIL SHIELD (which allows damage reduction to be increased). The term mithril is a fictional metal found in J. R.R. Tolkien’s Middle-earth writings. He is capable of leaping in different areas in order to use his mallet on enemies. 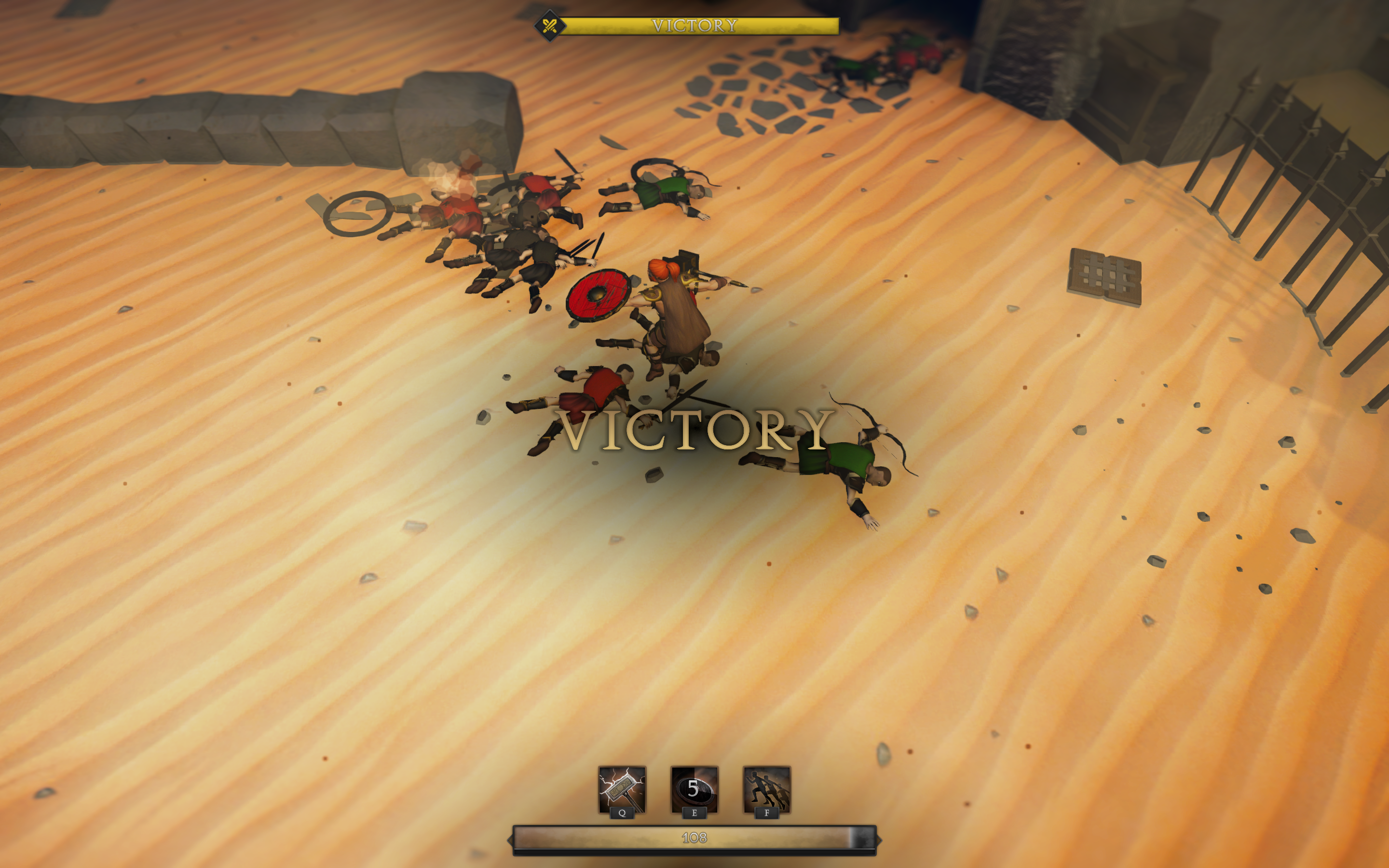 Victoria (a vampire with grey hair and a gothic dress) has an object called THE BLACK WOOD ROSE, that looks like a wand. There are unlockable upgrades for Victoria like VAMPIRIC GUARD (which is vampirism, where her health can no longer reduce below a certain percent) and ECHOLOCATION (where the bat swarm range is doubled). Each of the playable gladiators in Valor are just downright involved in the occult, with the ability to use a blood-like attack on enemies and force bats to swarm in their path. There’s a chance to unlock weapons for her called STAFF OF THE NECROMANCER, SANGUINE ROD, and MOONCALLER.

The reason I prefer Ember is because she has the option of using a fire power, which effects look like a flamethrower. The fire attacks may not always be the most effective, but fire erupting pass several enemies to cause damage is a decent maneuver.

The background music in Valor is enjoyable. Once you reach the main menu, there’s classical music playing, taking a serious tone to it and on the battlefield, the music turns more aggressive, making you feel more alert. The sound effects of fire can be heard when you attack with Ember, as well as other characters like Rebecca using her RAYGUNS and Krogar using his Mjollnir.

The graphics are mediocre. An archer may all look a bit different, being disguised as a futuristic tank, but is still prepared to destroy you. The characters have exceptional details if there’s ever a close-up shot, but since the gameplay forces you to look at the environment from afar, it’s hard to appreciate the minor details. There’s no difference in how the enemies seem to try and harm you, besides that they get stronger. The environment will usually look similar to the last level you completed, which can be exhausting. You’ll be fighting in what appears like desert terrains with rocks and stones around and there’s stationary objects like wooden crates and barrels.

There are moments when you die in a battle, but that’s when you have to constantly play the game in order to earn money at the end of rounds. When Ember dies in Valor, she says, “What? No! That’s not fair.” The money you earn can buy you weapons and bonuses, such as obstacles that blocks attacks. Basically, you upgrade your missing skills and base stats. It’s a good idea to play as the other Gladiators, so that you can defeat enemies easier, without your characters being stuck on level 1. No blood is visible when you attack any enemies and remain on the ground when they’re lifeless, This could cause you to overreact, mistaking a lifeless body for a living one.

It’s a struggle just learning how to move the characters properly, but after a continuous effort, the process gets easier. I managed to just head to the SETTINGS, only to find out how to effective move the character. I’m not sure about anyone else, but I find it more convenient to not move the character around while in battle and just attack, that is, until I have to fight more powerful enemies. No matter what you do, the enemies get stronger.

Controlling the characters can get easier. If you don’t want to fail in a video game, Valor is just not for you. Valor is not a game that I can envision myself playing on a daily basis, but I’m aware that the game has the potential to be a success.