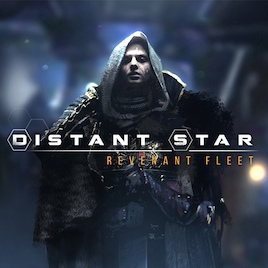 Thanks to Blazing Griffin, Ltd. for the review key!

The A’Kari people have faced their fair share of warfare, fueled both within and without by an immensely powerful artifact called the Ark. Their current war against the Orthani, however, has become too much to handle. The Orthani have developed a weapon, the Erebus Platform, which is capable of eradicating the A’Kari homeworld outright. To make matters worse, their premier Warleader’s fleet was decimated by an act of betrayal many sectors away. It’s up to the Warleader to scrape together what’s left of the fleet and begin the long, perilous journey home – after all, they’re all that stands between the Orthani and their people’s extinction.

In Distant Star: Revenant Fleet, you participate in ship-based combat and random events as you warp your way across a war-torn galaxy to save your homeworld. Readers familiar with the game FTL: Faster Than Light might find the premise familiar, but the similarities pretty much end there, especially on the gameplay front. You control a fleet of up to five ships, juggling their shields, health, and energy levels as you maneuver around hordes of enemy vessels in real-time, though with a handy pause feature to plan your attack. Random events are the order of the day, and you’re often given a set of choices that can change how the incident plays out. Every event that involves combat usually has a second objective of some kind, often protecting or capturing a ship or space station, but expect to face two waves of two fleets of Orthani every time you’re given direct control.

With eight ship classes, four weapon types, and a host of active and passive abilities to equip, there is no shortage of options. Ship types range from your typical gunboat to a tanky dreadnaught to a drone-launching carrier to a craft that spits ion storms at enemies. Each one fulfills a specific role and can only equip certain weapons and upgrades; while mostly balanced, taking too many squishy or defense-focused ships early on when your funds are limited can make for a quick failure. While you’re at the mercy of the random number generator to find weapons, parts, and extra ships, the gameplay allows skill to make up for bad luck. Weapons have no tracking ability, so a quick, constantly-moving fighter can avoid a lot of damage – the harder-hitting weapons are slow, have a hefty cooldown, and/or require a charge-up period of anywhere from two to ten seconds. Weapon fire also can impact an object or ship in its way, allowing for stronger ships to protect weaker ones by simply parking their shields over them. Furthermore, when a vessel’s shields are depleted, they get fully restored after thirty seconds. Altogether, a quick-thinking – and quick-moving – Warleader can keep shuffling the fleet’s more battered ships around, preventing the incoming damage from doing permanent harm. 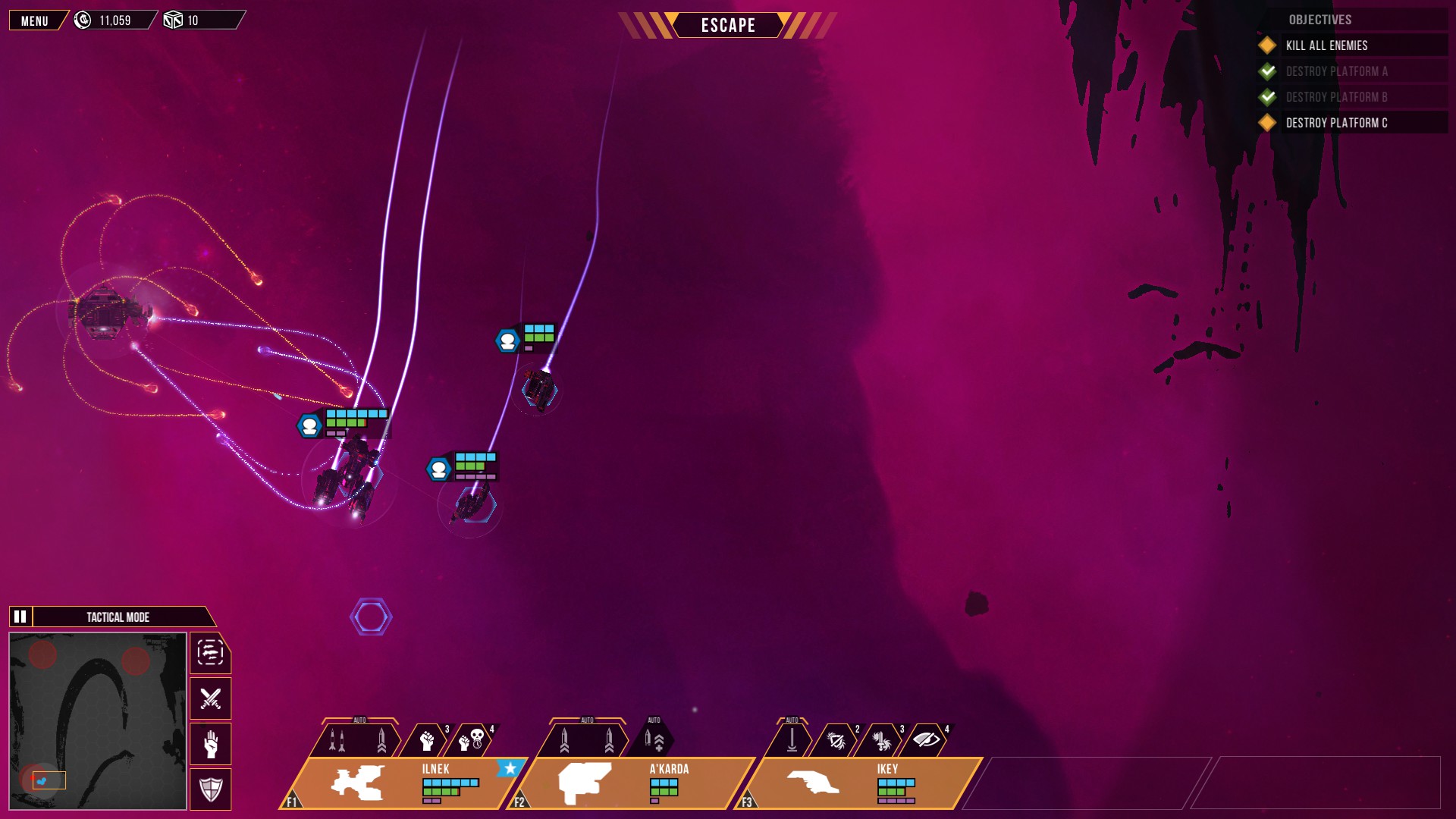 Strong Points: A good amount of options makes for varied, variable gameplay; challenging but fair; good atmosphere
Weak Points: Could use some more fleet control options; may get stale quickly
Moral Warnings: Ship-based combat; can make some immoral choices, which can be rewarded or punished

Should permanent harm prove unavoidable, the ship becomes disabled rather than destroyed – at least at first. Should you make it out of the fight, the battered ship will be damaged, weakening it in some way, such as removing a chunk of shield strength. Damage can also be sustained by running out of supply: you use one supply with each jump and can buy more if you find a trading station, but jumping without supply, while possible, is risky. Once a ship sustains three system failures, the next damage it would incur will instead destroy it. As certain stations can also repair damage for a small fee, the damage mechanic is challenging, but overall quite forgiving. The same applies to the game’s four difficulties: while the easiest setting allows you to sit in place and eat all incoming fire with little issue, the hardest requires proper maneuvering and strategy, not just with your own ships but in corralling your enemies into manageable clumps to maximize your own fire. The actual boost to enemy health and strength is relatively negligible, however, with the majority of the difficulty coming from facing stronger ships early on; such tuning keeps the game feeling fair throughout.

Still, though the gameplay is engaging, it could potentially wear thin after some time. Outside of picking more troublesome targets to focus fire on, you’ll command your fleet to do donuts around your enemy for the vast majority of encounters. With no squad commands or formations to be found, proper fleet management can feel more like micro-management at times. Most events you come across are similar, and even the mini-quest lines you stumble across tend to feel samey after a while – and it doesn’t help when they start repeating themselves in the same playthrough. Even so, the generally good gameplay design helps keep things feeling fresh even when it’s not: enemy ships come in the same flavors as your own, and a fight against two carriers plays out vastly different than one between three gunships and a support-oriented Pulsar. You’re still driving circles around your foes, sure, but it presents different problems to puzzle through, as well as varying opportunities to mess it up if you get complacent. It’s also worth mentioning that the game can fall victim to some relatively long load times, especially towards the end of a playthrough. 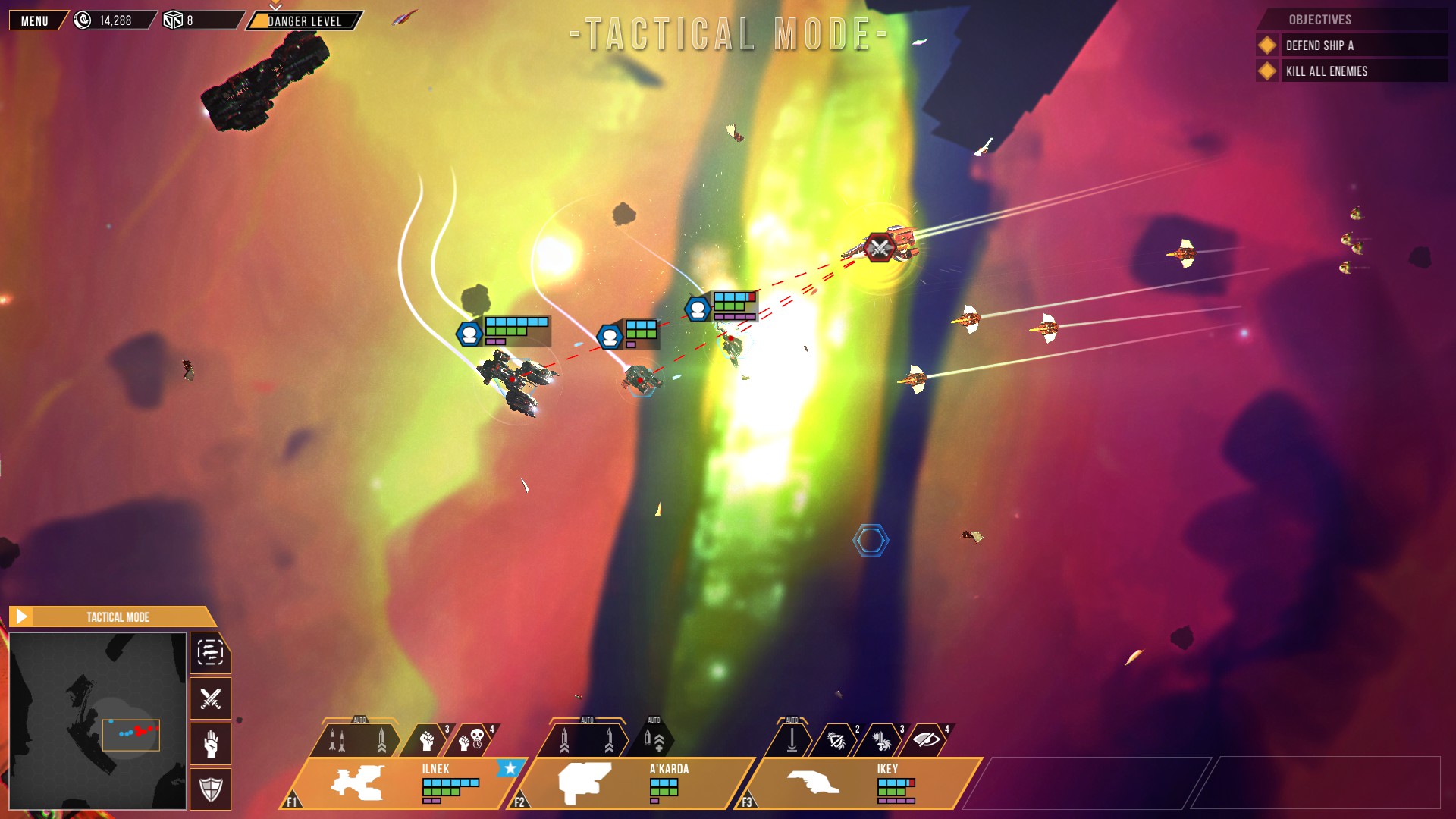 Distant Star provides a solid presentation to supplement its gameplay. Both the graphics and sound design provide a grim, though not edgy, look to the universe, with darker tones dominating the visuals and heavy drums accompanying the admittedly limited soundtrack. Each ship type is visually unique even at a glance, and an A’Kari Assault ship looks decidedly different than an Orthani or a pirate one. There is a hefty amount of little details that add to the atmosphere as well: lighter ship engines accelerate faster and sound lighter than the heavier ones, which seem to groan and struggle to push the mass along. Enemy ships lose chunks as they’re damaged, and the ensuing explosion varies depending on their size – tiny automatons give a little pop, while gigantic dreadnaughts explode in a gigantic fireball and an earth-shattering kaboom. The final enemy’s defeat is also perfectly timed with a loud, mechanical tone signaling the end of combat – though a second, more grating one will sound if another wave comes in. Even with its rather simple plotline, Blazing Griffin built a highly detailed world, though it’s mostly drip-fed to you; while it keeps things interesting and mysterious, it’d be nice to have a compendium of some sort in-game. It all comes together to make a style that’s perhaps more than the sum of its parts, though its parts are certainly worth quite a bit on their own.

Even with the somewhat-oppressive atmosphere, Distant Star holds up pretty well on the moral front. All combat is ship-based, with only the occasional hand-to-hand violence that’s relegated to descriptive text. The language is clean; though there may be an event or quest line I didn’t find that could contain some swears, the general tone of the rest of the game makes it seem unlikely. Perhaps the biggest question mark lies in the options you’re given, as some of them can be quite cruel – for instance, attacking a civilian colony that won’t give up its supplies. It’s always an option, however, and you’re never forced into it; sometimes, you’ll even be rewarded for playing morally and punished for being bloodthirsty. The opposite is true as well, however.

With its varied options and detailed atmosphere, Distant Star: Revenant Fleet has a lot going for it. If you can get around its potentially repetitive gameplay, its Roguelike nature lends itself to repeated playthroughs with different fleet configurations, giving it no small amount of longevity. Currently sitting at $9.99 on Steam, it’s certainly worth a close look.