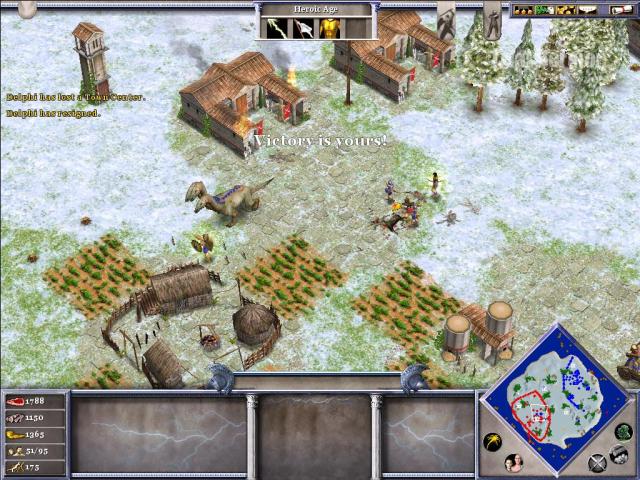 From history to Mythology, Ensemble Studios, the makers of Age of Empires, takes you into the heart of nine civilizations and their mythological gods and creatures. You can play the Egyptian, Greek, and Norse civilizations. Each has their own unique gods and powers bestowed upon them. There are heroes in the game that can heal themselves and are particularly good at fighting the mythological creatures. Some of the creatures you encounter include:

Each race has two major gods along with minor gods to help when you advance your civilization\'s age. There are many ways to gain your god\'s favor. This varies from civilization to civilization. The Greek gods require worshipping, the Egyptian gods like statues made of them, and the Norse gain favor from the gods through battles. When you gain favor with your gods, you can use unique creatures and special powers. Here are the major gods in the game.

The game modes are the same as the previous Age of Empires games. You have your single player campaigns. There is the random map mode, where you can practice against the computer. The computer does a nice job taunting you along the way. As usual there\'s the multiplayer mode as well, where you can smack your friends around. This requires a 56K modem at the very least. There are some new game modes. You have Supremacy where you can win by conquest, monument or wonder. There\'s conquest where you must completely vanquish your foe. Finally there\'s lightning mode where time goes by quickly.

What will be in the full version?

The demo is limited to Zeus and the Greek mythology. The full game allows you to play the three mythologies with nine major gods and twenty seven minor gods. The single player campaign will offer thirty five scenarios. There are four ages to advance to, but the demo only supports up to the third age. Finally there are twenty one maps to play on while the demo offers one.

From a Christian perspective there are some things worth mentioning. The most objectionable being the many gods in the game and how they are portrayed. This religious system goes against our beliefs and does not glorify our God in any way, shape, or form. Other deities are being worshipped here. Other than that major issue there\'s violence from battles. Finally, some of the female goddesses can use more clothes.

This game is easy to install and play. The interface is easy to use and maneuver. It has the same look and feel as the previous Age series. You can command your units via mouse or by keyboard shortcuts. The game ran very stable with no lockups or glitches. The sound effects and music are very fitting. The intro music reminded me of Indiana Jones for some reason. I liked it though. The sound effects and voice acting is nice. The narrators had nice accents for the civilization they represented. Some were better than others but overall it was nicely done. The graphics are 3D in this game which is a first for Ensemble. There were many cinematics that added a nice touch to the single player campaigns. It was in the cinematics you saw the 3D art. During game play, it seems 2D. Just like the previous series, the game play is quite fun. The mythological creatures add a nice touch. If you don\'t mind a game breaking the first commandment you\'ll enjoy this game. As for me, I\'ll stick with Age Of Empires 2 for now.