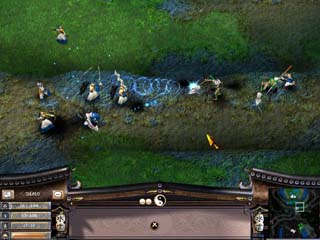 This is a fantasy real time strategy game based off of Japanese Mythology. The characters are a little on the anime side and they carry huge swords! This game has the best graphics I have seen for a strategy game. The graphics are not the main selling point, the coolest feature is custom building of your warriors. You get yin/yang points from battling your foes, to aid you in enhancing your forces. There are many ways to upgrade your peasants to elite warriors because they can harness up to three unique abilities. You\'ll have a blast playing with the different combinations, you can create anything from sumo-wrestlers with canons to elite samurai warriors.

The demo only allows you to go through the tutorial and the skirmish. The full version will have a campaign as well as multiplayer available. With the multiplayer you can play up to eight people online. The tutorial has lessons on how to build up the economy. You basically get peasants and collect rice and water. Don\'t forget to keep your rice watered. Your peasants will have the ability to build buildings like watch towers, dojos, archery ranges, bath houses (not what you think), stables, fire works places etc. You will be able to convert your peasants to geisha (healers), archers, spearmen, alchemists, and you can mix and match from there. The only unit that cannot possess multiple traits is the healer. The healer is created by the bath house. See? It\'s clean! (no pun intended) The next tutorial covers creating your army. You will learn both offensive and defensive techniques. The final tutorial lesson covers Battle Gear which is how you upgrade your army. Most structures allow you to enhance your warriors with yin/yang points. Be sure to use them and give yourself an edge over your enemies. There are many options and combinations you can use. Creating and experimenting with your warriors is what makes this game fun! One cool thing about your army, when they get hurt pretty bad they slow down. It\'s almost realistic! After you master the tutorials, try the skirmish. It\'s hard!

From a Christian standpoint, there are battles so there is violence. There is a mature option where you can turn off the blood. My main gripe about the game is that it\'s overloaded with new age and spiritualism references. This game is from a Japanese culture so you have to keep that in mind. There are many yin/yangs, meditation and Zen references. You will also be using your spiritual powers and life force in battle. Other than that I think the healers can use more clothing. ;) The game was easy to install, it uses your typical install shield.

The graphics were good, the best I have seen in a strategy game. They are 3D rendered and the characters are nicely detailed. It has good sound effects and music. I did come across a glitch in the sound where it kept repeating some noises, and I had to exit out and end task before my system stopped. There are no patches yet, but hopefully they will release one if this remains a problem with the full version. The voice acting was good for the peasants and warriors. The tutorial was a little slow and you could not skip ahead. :( Other than that the game ran great. If you like strategy and fantasy games I would highly recommend this one!