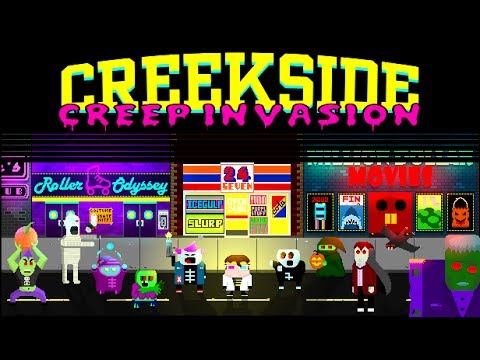 Thank you Ouch Giver Games for sending us this game to review!

Creekside Creep Invasion is an 80’s Halloween themed 8-bit rogue-lite twin-stick shooter PC game by Ouch Giver Games, an indie company. You play as Squirt, a kid who lives in downtown Creekside. He is having a hard time sleeping through the night after Halloween because of a whirring sound outside. Sure enough, looking outside he sees a dozen creeps with glowing red eyes all walking in the same direction. Squirt decides to go investigate and finds that they are attracted to an antenna next to a man in a white lab coat. The man seems to be controlling the creeps with the antenna. Your goal in each section is to destroy all three antennas, but I haven’t managed to get past even the first section. There are five sections including Downtown, Suburbs, Carnival, and Cemetery areas.

You start the first section with 100 health and 100 stamina in a convenience store without much of a tutorial. In the convenience store you can buy various upgrades including power-ups, health-ups, mystery boxes, and costumes (each with a unique special ability), which will all go away once you die. Once you step out of the Mini Mart you start in, you can’t go back in, and you will have to fight off the creeps that will be chasing you or shooting you. You cannot progress in the level until you have defeated all of the creeps in that area. These said “creeps” include Halloween figures such as vampires, mummies, skeletons, zombies, and ghosts.

To kill creeps, you must shoot them with whatever gun and ammo type you have on hand. Ammo types include random things like eggs, TNT, bowling balls, and water ballons. Guns and ammo types are randomized, meaning you have no say in what you get, and when you run out of ammo, you are automatically replenished with a different one. In my opinion, this feature is not my favorite, because several ammo types are useless. With the TNT ammo type, I find it difficult to kill flying enemies, because the bombs stay in place while the enemies will continue to advance toward you. 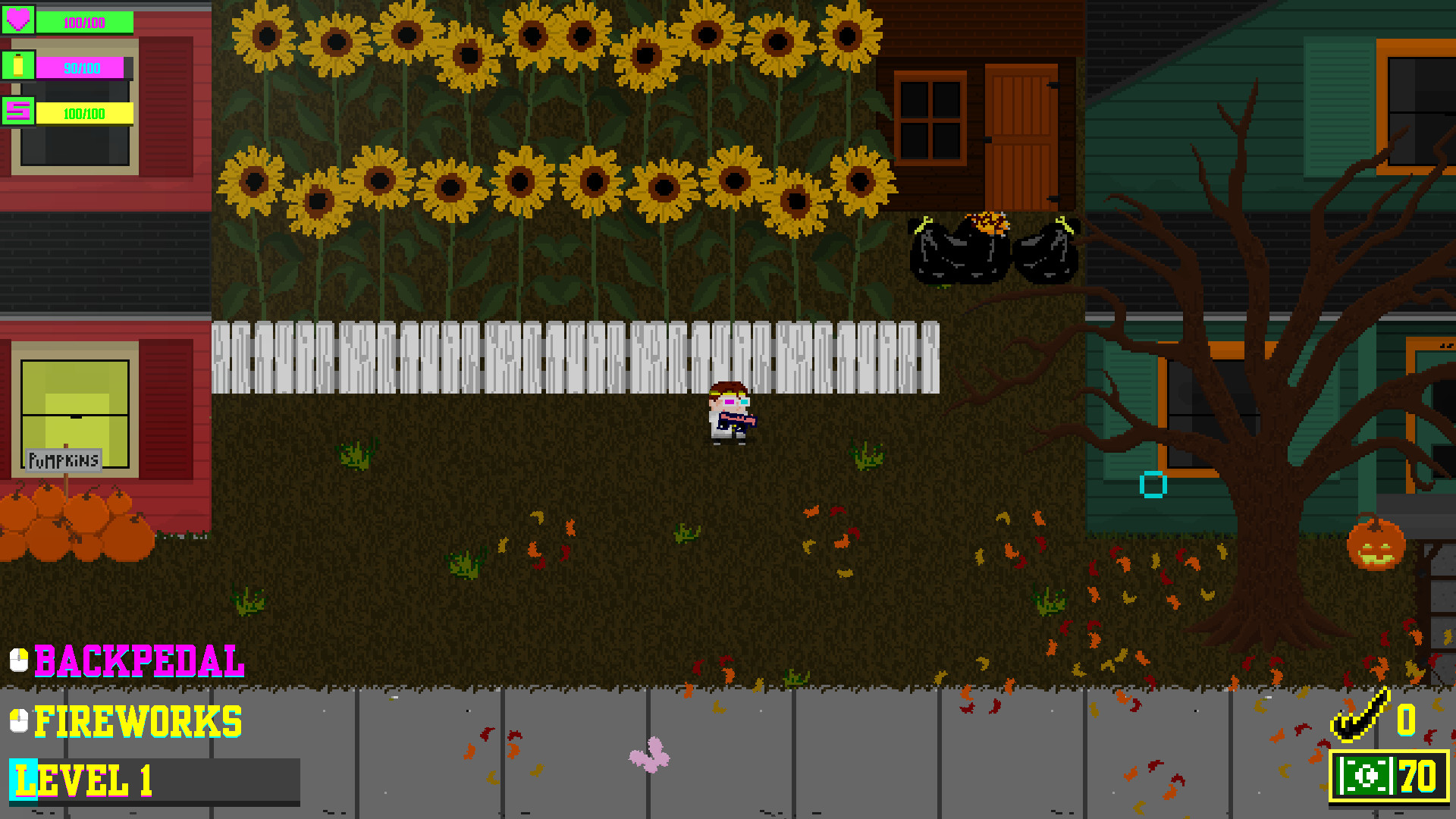 Once you do end up killing creeps, you’ll notice that their blood is green. But when you die, your character turns red. Even after you die, enemies will continue to fire at you until you restart. Sometimes when you kill creeps, they will drop loot. Loot in this title can be money and power-ups.

There are two ways you can play this game. Mouse and keyboard (WASD to move, mouse to aim, left-click to fire, right-click to do special attack) and with the gamepad/controller (left stick to move, right stick to aim, and triggers for regular fire and special attacks). You can check the armor you are wearing with B button or Tab. I personally prefer playing it with a controller.

The music changes between a few songs each time you step out of the Mini Mart you start in. Though the quality of it isn’t the best, it fits the 8-bit theme quite well, and since the soundtrack is free, I think it’s worth getting.

I feel the same way when I look at the graphics. They are very colorful, but rather low in detail, which again, compliments the 8-bit feel you get from Creekside Creep Invasion. 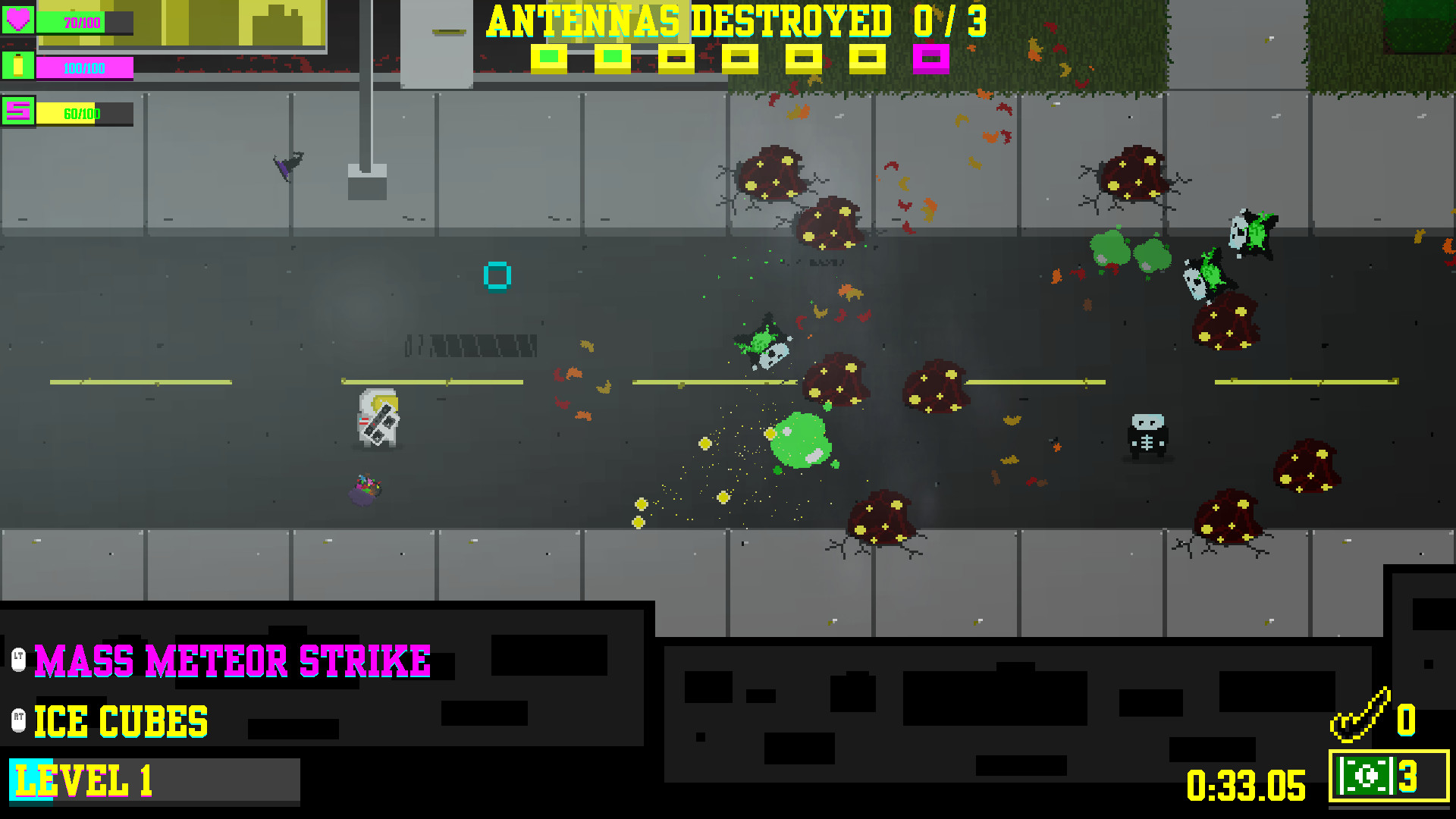 Health replenishment is very hard to find outside of the convenience store. You may find health power-ups in trash cans or by receiving a mystery box with a health-up inside. When you level up in this game, you will receive a mystery box (and a Steam achievement most likely), which may include many different things. Only if you find a health-up will you be able to regain health in this game.

I found Creekside Creep Invasion to be a very fun (yet difficult) title! However, I also found a bug. Once I had stepped out of the Mini Mart, I backed into the wall behind me so I could more easily avoid some bullets hurling toward me, and my character became stuck outside of the map and I couldn’t see my character. I got out eventually, and it didn’t happen again. But as I continued to play, I noticed that it would freeze occasionally, which isn’t normal on a computer like mine, especially running a game like that. Once it froze my PC to the point where I had no choice but to shut it down.