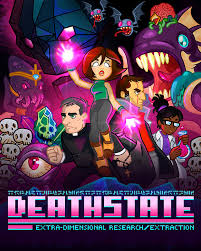 Thanks to Black Shell Media for sending over a key for review!

Deathstate is a twin-stick shooter rogue-like with heavy Lovecraftian themes. Although calling it a twin-stick might be the wrong wording because the core mechanic is that you don’t press any buttons to shoot. With the removal of a focus on shooting, the game is designed around careful maneuvering and positioning.

As usual with the genre, you’ll be running around in random dungeons collecting loot, killing enemies, and dying repeatedly. There are 12 floors with a boss fight every 4 floors. Each floor is pretty large, chock full of enemies, shops, and other things to mess with. The level generation is varied enough, but nothing special. The enemy variation is good enough; there are usually 3 or 4 enemy types in each zone. The powerups you can pick up are the most interesting part of the game. Runs end up pretty different from each other not in level generation or gameplay loop, but the items you come across.

In Deathstate, you don’t need to press a button to shoot your weapons. Your character will automatically shoot at enemies within range. With that in mind, the developers were able to ramp up the amount of dodging needing to be done. Most enemies shoot some small bullet pattern, and most of the time there will be some sort of bullet coming towards you. This doesn’t end up being a problem, because you don’t even need to think about shooting back. This can either be seen as something interesting and new, or as a hindrance. Sometimes the character will shoot at an enemy that you aren’t as worried about, and you don’t have control over that. It’s the one thing that Deathstate does that’s a little bit different, but it’s a change that doesn’t do much to innovate and isn’t significant enough to really matter. 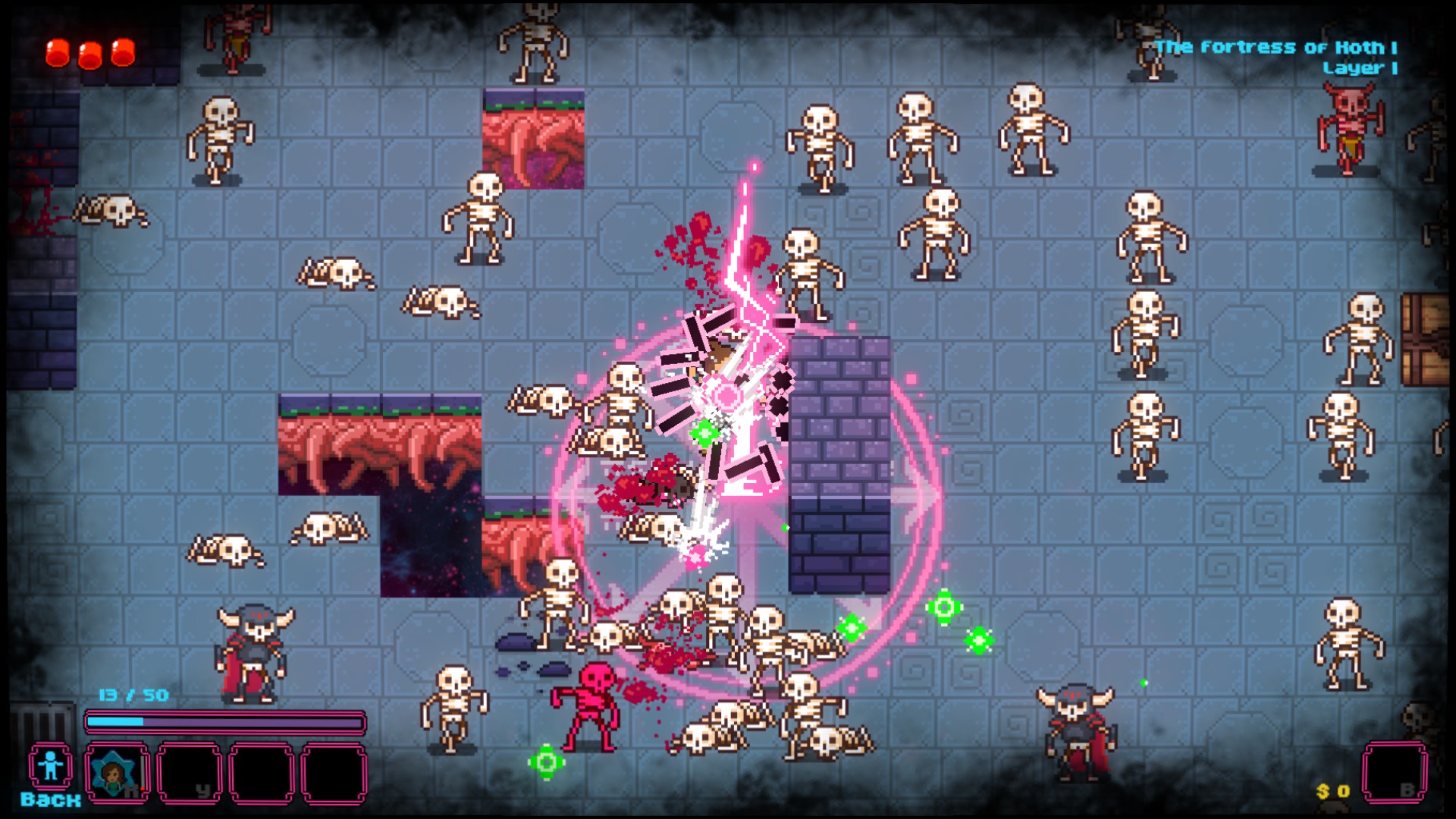 Strong Points: Run variation is decent; plenty of content
Weak Points: Too standard for its own good; collision has some issues; pacing can be a little slow; hard on the eyes sometimes
Moral Warnings: Organs as powerups; Pentagram-esque patterns; demonic-like, undead, and cthulhu-like figures

Despite not needing to think about aiming, you will have to think about your active items. You can carry two active items which require mana to use. These abilities can be flames that shoot in all directions, temporary invincibility, or even a teleport. On the other hand, there are passive weapons to find. There’s a decent number of new weapons to pick up in the game, and these are really what makes each run a little bit different. Sometimes you will be firing lasers, other times bubbles. You can also find potions all over the place that give random effects until you identify them. Lastly, there are stat upgrades. These are the items you will find the most. Most of them have both positive and negative effects.

Surprisingly for how many bullets Deathstate expects you to dodge, it isn’t a difficult game by rogue-like standards. Personally, I beat my third attempt at it, which was disappointing. I go into the genre expecting a significant challenge, and Deathstate looked like it would be incredibly difficult, even outside of my territory. I think this title could be a great entry point for someone new to rogue-likes, but for veterans it won’t be tough. 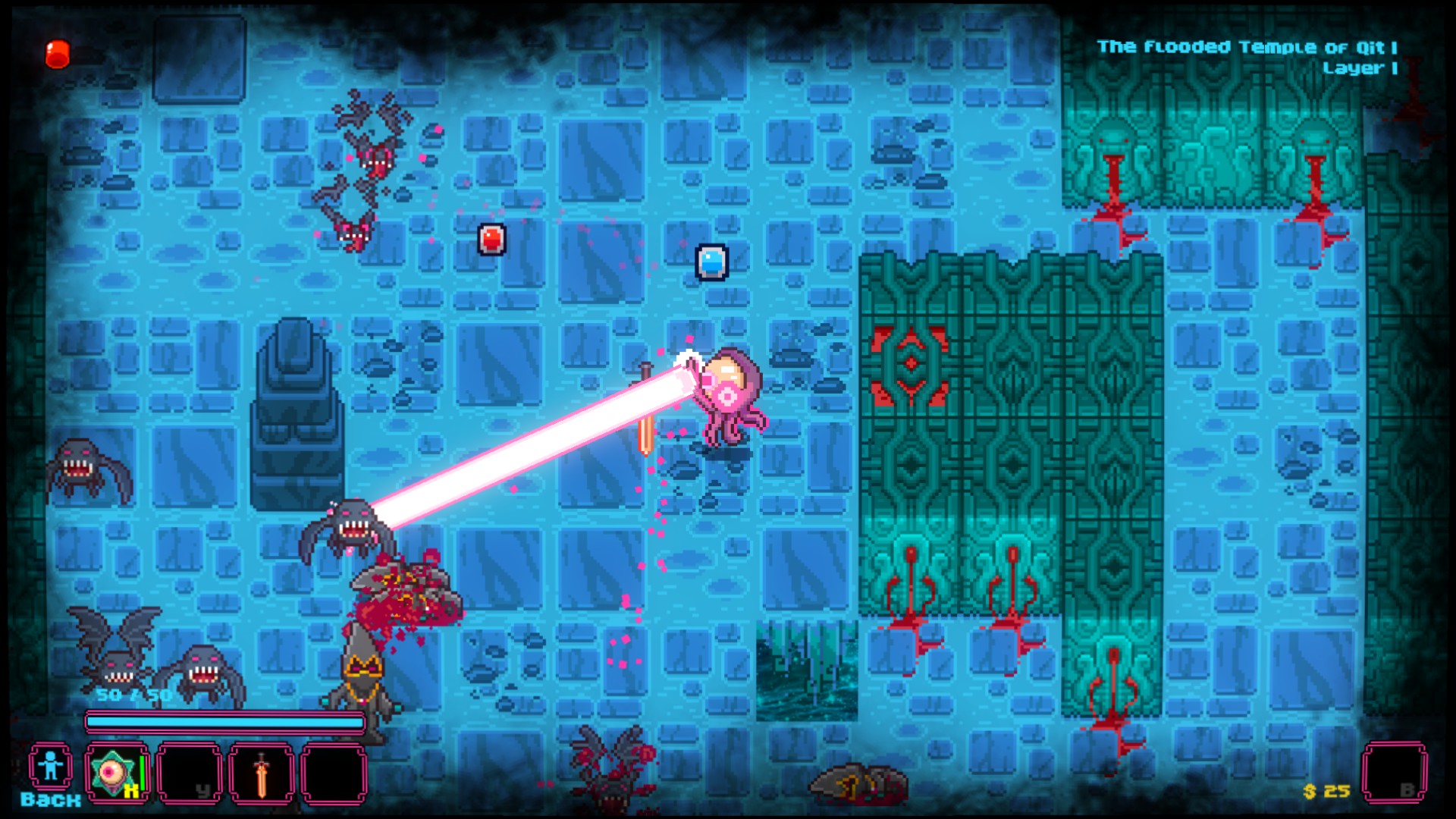 The controls are nearly perfect. Everything is responsive and feels good. Maneuvering between bullets feels smooth, and I never felt like I got cheated into taking damage. The soundtrack is a little repetitive, but overall fits the atmosphere perfectly. It has a very eerie tone to it. Sound effects are okay, but not noteworthy. The general art work is fine, but nothing great. The only issue with the graphics is that there are several filters put over everything, so it can hurt the eyes if you get motion sickness. As for bugs, I haven’t found anything significant other than the character has some issues when near walls.

Deathstate has a lot of moral issues. Enemies will drop items labeled as organs. Weapons are always magical, such as spellbooks. When you use an active ability, it puts a large pentagram-esque pattern on the ground. The whole theme of the game is Lovecraftian, so everything from Cthulhu-like and undead enemies to magical spells. Although there isn’t any blood or cursing that I’ve found, if that’s worth anything. I would say to avoid this one if you aren’t okay with occult usage in every direction.

This title offers almost nothing new to the genre. It is very standard in execution; from level generation, to items, to enemies. It’s all been done before, and in a lot of ways done better. Deathstate feels polished for the most part, but I’d rather something unique than polished. I do want to mention that I have a lot of fun with the game; I’ve put some time into it and want to put in more. This doesn’t mean it’s a game I would tell others they absolutely need in their library. You can do much better. If anything, if the moral issues don’t worry you, and the game truly looks like a must-have, wait for a sale.