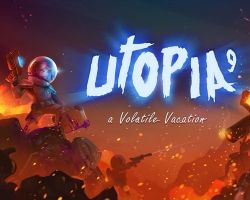 Thanks to Whalegun for the review copy of this game. My family thoroughly enjoyed it. :)

Utopia 9 is an planet-wide vacation resort. Filled to the brim with mutants, Utopia 9 is a dry wasteland with all the conveniences you need. The local guns and groceries stores are sure to please as you make your way through waves of mutants to customer service. Utopia 9 is truly the last vacation you will ever need.

In Utopia 9, the player fills the role of a tourist landing on the barren planet resort. In this top-down twin stick shooter, the tourist starts with a suitcase in his right hand, a gun in his left hand, and a camera in the utility slot. As the game progresses, you will find more guns, melee weapons, utilities, and armor. Additionally, collecting soylent will allow mutations to power up the tourist. The planet has different path choices to follow to reach customer support, each with randomly selected weapon and loot drops. If all the tourists die, a mutant will take their loot and become a nemesis. 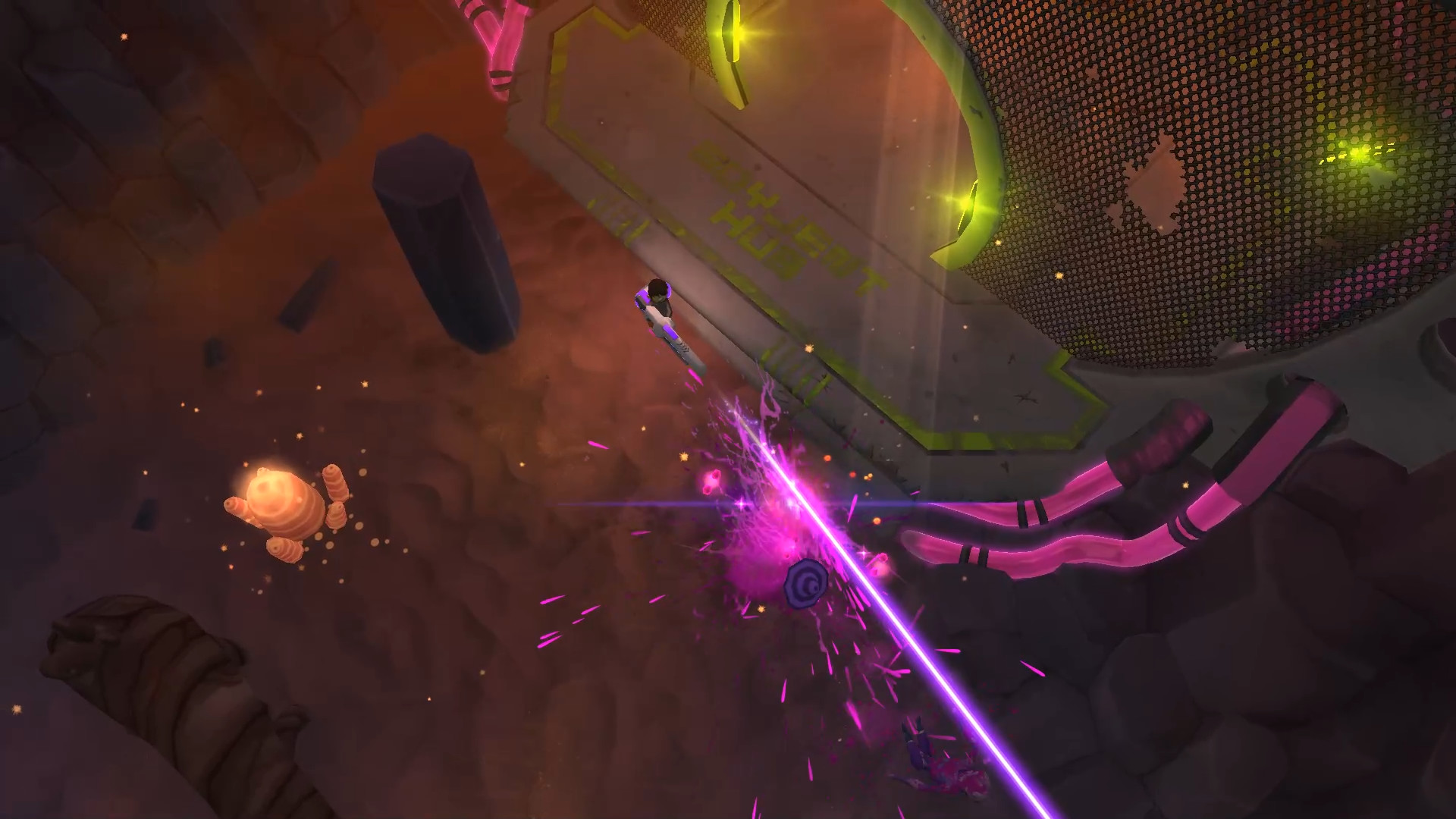 The game contains 5 main types of enemies. Melee mutants runs close, trying to kill you with a suitcase or some other close range weapon. Gun mutants wield basic ranged weapons, like the pistol you start with. The tougher special mutants will wield a weapon with the same loot type as the level; for example, a melee loot level will have special mutants with strong melee weapons. A nemesis is a real challenge, fighting with the loot you last died with. Finally there is the boss with his forcefield, electric trap dispensers, and his minions. If you manage to make your way through all the mutants, you are rewarded with an unlockable character.

Friends can join at the start of a game, which brings advantages and disadvantages. None of the players can be left behind. To revive dead teammates, someone has to give half their health to the that person. Unfortunately, if a player is caught in an explosion that tosses their body out of reach, they can't be revived, and you manually have to quit and start from the beginning again. Chests drop equipment equal to the number of players currently in game. Med kits, ammo, and soylent pickups are all shared fortunately.

The controls for this game are simple for fighting and swapping weapons, but managing inventory can be a bit of a challenge at first. As an example, if two suitcases exist in the right hand slots, switching one of them to the left can be a challenge with four buttons for sorting your items. There is elevator music on the loading screen, but the rest of the game is just sound effects. Most of the game's story is on the Steam store page, rather than in the game. 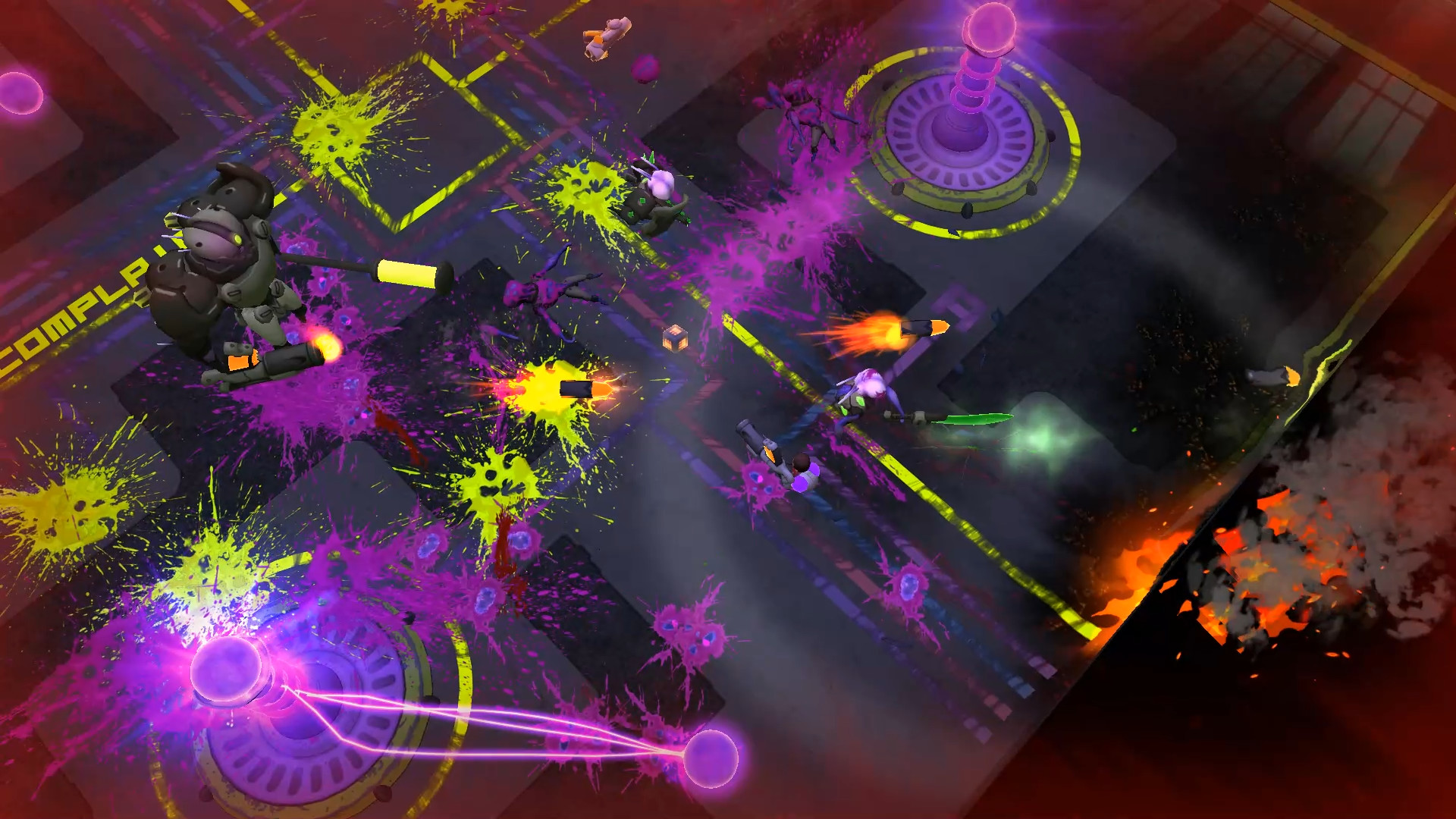 Utopia 9 feels well balanced. As you get closer to customer support, better weapons drop and stronger enemies come in to compensate. It escalates to a point where enemies are easier to kill, but a single mistake can cost the game. It rarely feels unfair; most of the time, I knew the mistake I made.

Excessive amounts of purple blood and remains are found throughout the game. Most of this comes from mutants the tourists kill. There are hints that the mutants were once human, and aren't fairing very well. Some of the signs are vomiting mutants, messages on walls, and mutations tourists receive to grow stronger. If you get a specific mutation, Mutants drop alcohol to heal you. One buff is called "Full Body Vape", and surrounds you with a cloud of colorful smoke.

Utopia 9 is definitely fun, and it could be even better with a little more polish and a bug fix. The art is well done and the building interiors and exteriors look great. I beat the game in one day with the help of my brother, but we didn't manage to beat it a second time yet. We are working on it, slowly but surely. This is definitely replayable.