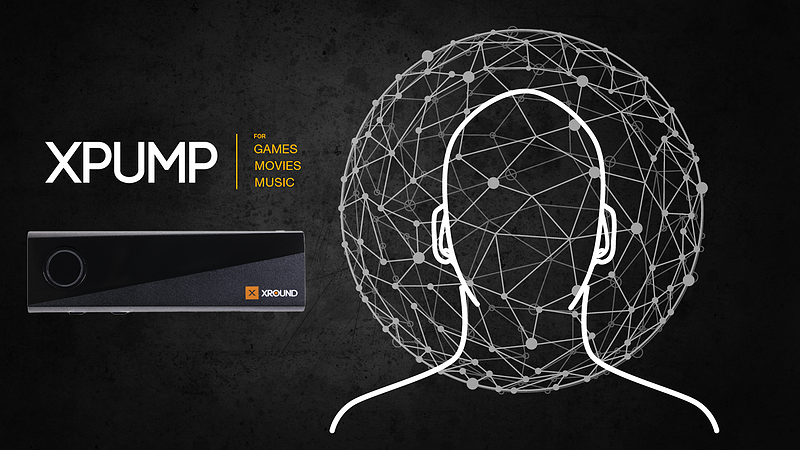 Thank you XROUND for allowing us to evaluate a prototype XPUMP device!

While slightly outside of our core mission here at Christ Centered Gamer, I personally also happen to have a rather relentless audio hobby.  I have built up over the years, a piece at a time, a home theater that I am rather proud of.  This includes fairly high end modern electronics, as well as classic high end speakers that I have personally refurbished.  It has become a very rewarding hobby, and one that my wife tolerates, given that she gets to enjoy the fruits of my labor.

Having trained my ears over the years on what proper high quality audio reproduction is supposed to sound like, I always look forward to seeing any audio related products that we have the chance to review.  That is why most of the gaming audio products like headphones or headsets that we have the opportunity to test I have taken the time to review.  I will admit that my particular tastes, like anyone else's who is deep into any hobby, may not necessarily represent what the mainstream prefers (or thinks that they do), but that is common in any somewhat subjective field, and especially in audio.

Generally speaking, the ideal audio system would be able to faithfully and exactly reproduce what was recorded by the original microphones at any desired volume – and sound exactly the same to anyone sitting within listening range.  That is typically the main goal, and of course, it is never actually achieved, since all reproduction systems are always some set of compromises.  These may be cost, size, frequency response, dynamic range, dispersion properties, distortion, room interaction, or a myriad of other reasons.  With XROUND's bold claims to improve any stereo system, I had to take the opportunity to give it a try.

XROUND's XPUMP promises to improve on virtually any set of stereo speakers, by utilizing their patented algorithms and DSP processing to offer immersive sound for everyone.  Since many people do not have the room or budget for a full surround sound speaker setup, the idea here is that this tiny device can replicate much of the experience.

It has been known for many years that throwing sound around the room in different ways can interact with the room and create the illusion of sound coming from different places.  While I am hardly a fan of Bose, their classic 901s were designed on this principle, and have their fans as a result.  Today, many high end speaker systems use a dipole (or bipole) effect of radiating sound both forward and backward to create an illusion of spaciousness, or sound that is harder to localize, therefore feeling more natural.  The science behind many of these traits of room interaction and directionality has become more and more well understood, and is the basis for many implementations of virtual 7.1 surround sound in various headphones, as well as the recent invention of the soundbar.  Again, while hardly a proper replacement for a real surround sound system (much less a live event), these techniques help bridge the gap in the many compromises that can make up audio reproduction today. 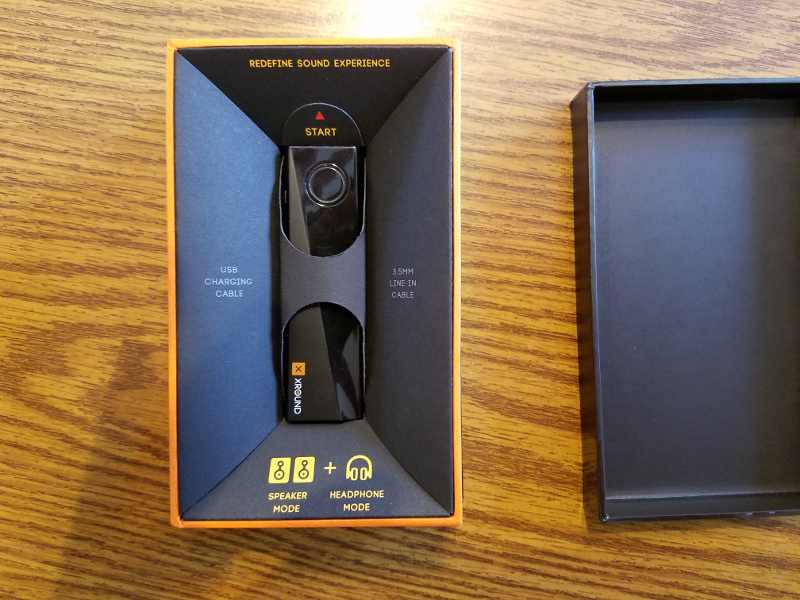 The goal of the XPUMP is to apply these as well as other patented methods to try to simulate a proper surround sound system utilizing just stereo speakers, and the DSP processing power contained in this tiny box.  In the current version, only an analog stereo signal goes in, and another stereo signal goes out, via two 1/8” (or 3.5mm) headphone jacks.  This way, it works with everything from a mobile phone to some larger sound systems.  Once you press the XROUND button, the DSP gets to work and tries to greatly enlarge the sound field and make you think your sound is all around you.

There are two modes, which are set via a slider: headphone and speaker mode.  The idea is that you need a substantially different sound field for each type of audio device.  What I found was that they also targeted a very different sound signature as well.

At first, I tried connecting these to several different pairs of my headphones.  I found a few curious things.  First of all, in pass-through mode (with XROUND disengaged), you could adjust the volume to be a mild amplifier/headphone amp, but if you pushed it too far, you would definitely hear distortion.  If the input audio signal was too high, it would overload the device and appeared to do something similar to an overflow - the sound would just bottom out, with large swaths of the frequencies getting very quiet.  It is strange, but avoidable if you need the input source quieter.  I also found that, with XROUND engaged, what you hear dramatically changes.  I'm not sure it was better.  Or at least it definitely was not to my taste.

If you have read any headphone reviews written by me in the past, you would know that I always aim for fairly flat headphones, with a high emphasis on detail retrieval.  For me, I want to hear each instrument, each voice, with utmost clarity and perceptibility, and all at the same time.  When this is done, then I enjoy nuances much more, which helps me be more involved in the music, and really feel the talents of the artists.  This also benefits games, since if you can still hear them coming in the midst of an explosion or other loud impact, then you have an advantage.

However, the XPUMP in headphone mode activates my pet peeve #1: massive bass boost. They just about kill the clarity of whatever I am listening to, by overpowering the sound with bass.  Now, I suppose on some headphones, this may be desirable, but for me it is not.  Unfortunately, even in pass-through mode, my music sounds much better without this device in line.  I don't know what it is; maybe it doesn't like my desktop computer or headphones or headphone amp, but after just a few minutes, it had to go.  It seemed like it was adding undesirable noise or distortion to the line, which reduces the clarity and quality of the incoming signal.  It's a shame, really, as it did seem to do interesting things with the spacial effects. 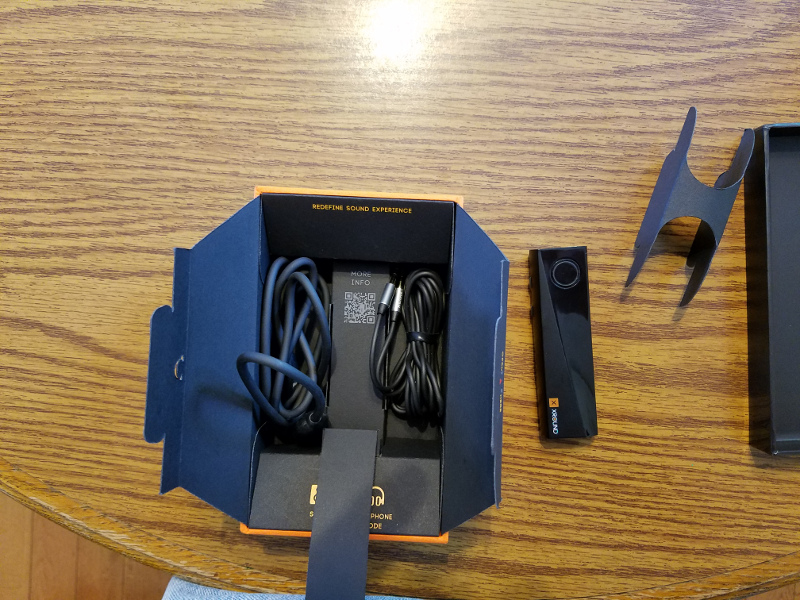 With my desktop speakers, I also did not like what it did to the sound.  Simply put, it adds increased noise and distortion to the line, as it did with headphones, and I am well trained on hearing this in any audio device I have.  My desktop speakers are arranged in such a way that they point at my head from the side, to make room for my dual monitors, so with the tweeters pointed right at my head, they are almost like really big headphones.  As such, the surround effect was not desirable, especially since without much room reflections going on, the speaker mode EQ, which greatly raised the mid range, did not do music any favors.

In my living room, I have an upper mid range Denon receiver from a few years back, and the second best pair of speakers in my house.  They do sound excellent, but unfortunately, the room that they are in do not extract their best from them. There are a lot of reflective surfaces, and with that and hardwood everywhere, they still sound good – they are excellent speakers, after all – but not their best. And being dipole speakers in nature, they radiate sound throughout the room.  Now, most of my sources are directly digital via HDMI or TOSLINK cables, but I had to use the HTPC in analog stereo mode for this testing.

I tested both music, as well as Steam streaming to get an idea of how things sounded through the virtual XROUND mode.  Given the already compromised frequency response of my room (though to be fair, I never did run the receiver's built in room correction), the mode actually did sound pretty decent.  Given the already less than ideal analog source, the pass-through mode sounded fine through the Denon, and XROUND mode was interesting, and did indeed do a great job of simulating surround presence.  I am not a huge fan of the undesirable equalizing that it does by default, but the effect is not wholly unwelcome.  However, I am convinced that I could probably do much better by finally getting off of my lazy bottom and running the Audyssey room calibration setup (though, to be fair, if the processors in a MSRP $1600 receiver didn't do a better job than a $120 pocket sized device I would be quite disappointed).  Maybe this review will finally motivate me to do just that.

Now, it has to be said, that the device itself does take some effort in trying to trick the listener.  What I mean by this is that it has been shown in many scientific studies that our brains are really easy to trick – if you listen to the same source, but make one of them just one decibel (db) louder, we will automatically think the louder one sounds better.  So, all proper A/B testing must be done level matched.  This device makes that rather difficult, because it jacks up the volume by at least 3-5db as soon as you press the XROUND button, making direct comparisons difficult.  I had to do my best to quickly level match my sources when going between pass-through and XROUND mode in order to make the comparison as fair as possible.  Like many with reasonably trained ears, I prefer less equalized sounds rather than more, since I know what to listen for since the XPUMP adds quite a bit of obvious coloration.

The XROUND XPUMP device is neat, and I like what they are trying to achieve.  When the surround effect works, it is pretty remarkable.  Unfortunately, with undefeatable equalization, and a less than pristine signal reproduction that seems to make the signal weaker on pass-through, I would not recommend this device to true audiophiles.  However, If you have an inexpensive audio setup, then I could see the effects, or one of the EQ boost profiles, being useful.  My only concern then becomes price.  I say that because if you know what to shop for, you could spend the $119 on better audio equipment, which is likely to go much farther in improving your sound than this.  Especially with headphones - $119 can get you some great cans.  Unless you happen to have one of the devices that they modeled the sound after, you never really know if what you hear is what the artists – or XROUND – intended.