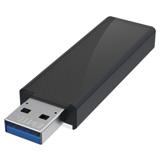 Thank you EMTEC for sending us a review sample.

USB flash drives are quite popular and smaller sized drives are fairly inexpensive with 16GB drives costing less than $5 on Amazon.  USB 3.0 256GB drives sell for less than $50 as well.  Sadly, the EMTEC SpeedIN’ USB 3.0 S600 256GB isn’t available in North America yet, but the converted prices put it over $100.  While the SpeedIN’ USB 3.0 S600 256GB is certainly a nice device, is it worth the premium?

The design is simple and elegant with the smooth black patterned finish.  While it’s not obvious, there is a red LED that flashes dimly when the device is being accessed.  There’s also a notch on the corner to attach a key ring if desired.  My only concern with the notch is that it’s thin plastic and it makes me wonder how durable it will be in the long run.

Enough about the looks, let’s talk about how fast it is!  According to the website the read speed is rated at 400MB/sec while the write speed is up to 300MB/sec for the 256MB model we reviewed.  We ran some data transfers using traditional hard drives to solid state drives as well as running a CrystalDiskMark.  Though our results were good, they didn’t reach the numbers on the manufacturer’s website. 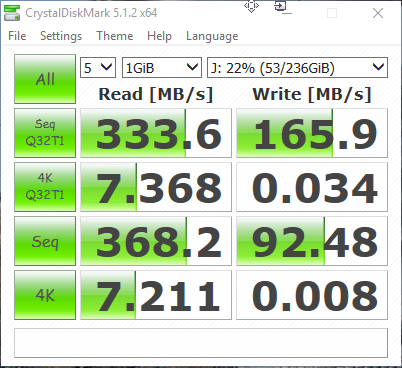 Strong Points: Great performing USB drive; password protection available
Weak Points: The default file system is FAT32 which does not allow files bigger than 4GB; only available in Europe
Moral Warnings: Depends on what you put onto the drive

The CrystalDiskMark gave the read speed between 333-368/MB and 92-165MB/sec for the non-4K tests.  This is pretty fast given the USB 3.0 interface.  Of course it’s not going to touch the speeds of a SATA connected SSD drive. 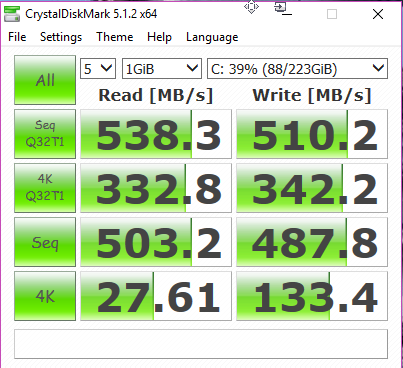 Not surprisingly, the speeds will drop dramatically if connected to a previous generation USB port.  Another technical detail worth mentioning is that this device is FAT32 formatted by default and cannot take files bigger than 4GB without reformatting it to another file system like NTFS in Windows.

Many people still use traditional spinning hard drives and transferring data from a hard drive to the flash drive peaked at 157MB/sec for me.  In this test I transferred my e-mail folder which is 15GB in size. 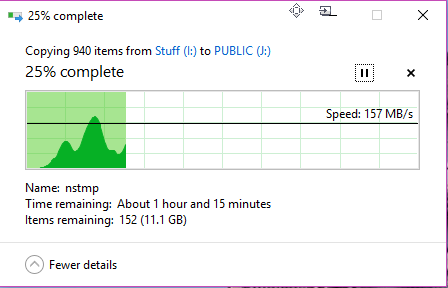 I have two solid state drives in my system, one 240GB for booting my operating system (Windows 10), and a 1TB for storing games.  When transferring my mail folder from the flash drive back to my OS drive the max transfer rate was 357MB/sec.  The max speed from transferring a game, (DOOM) to the flash drive was 257MB/sec.  Due to the FAT32 file system in place, I was not able to copy all of the files over since at least one of them was 5GB in size. 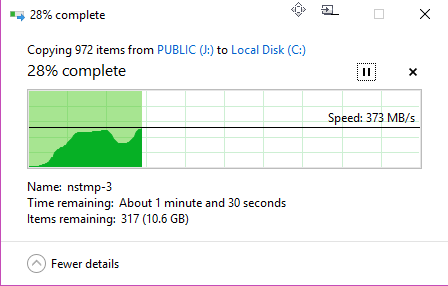 Included on the drive is a password application that lets you set up a secure partition as well as a public partition.  The public partition will show up as an accessible drive in the operating system while the other one will require the password to access it.  Be sure to provide a hint if needed because you will not be able to recover your password if it’s forgotten.    If an incorrect password is entered six times, the secured partition will be formatted.

All in all, the SpeedIN’ USB 3.0 S600 256GB is nice and fast USB drive.  Though the numbers aren’t as fast at the website claims they’re still pretty good.  Definitely faster than some of the cheaper 256GB USB flash drives out there.  People who want to do more than just copy files around will really appreciate what this USB drive has to offer. I hope that this device comes to North America and that it will be competitively priced.