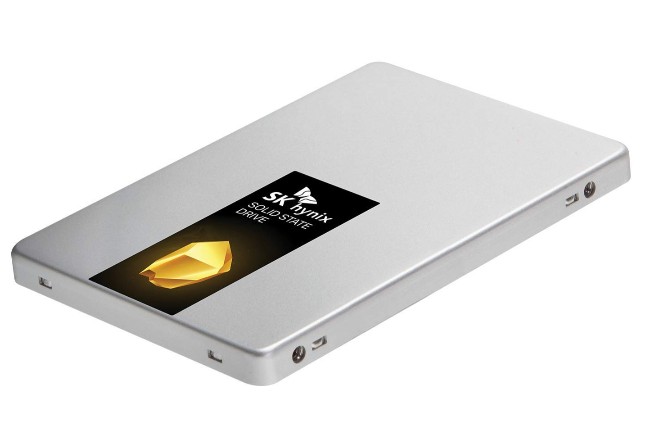 Thank you SK Hynix for sending us this drive to review, along with a nice red hoodie!

I've been a technology professional for over 20 years now, and storage has kind of become one of my specializations. In my day job, I have access to many of the latest drives, including some of the fastest NVMe drives on the planet. So I have been kind of spoiled as to what fast is. But I also realize, through experience, that SATA SSDs are completely fine for 95% of all desktop workloads. Open world games do not require much more speed, but more consistency; if a drive hitches for a moment, that is far more noticeable than how fast the data streams. Windows bootup time is now so fast, that no one can really tell if it's one or two seconds quicker, and so on. So here we are, all these years later, and SATA SSDs are still completely useful and relevant.

For this review, I did a couple of different tests; some in Windows, others in Linux. Of the four SSDs I compared, I couldn't do every test in every operating system, because some drives are formatted NTFS, while others were formatted ext4. Since I dual-boot, it is easy to reformat an empty drive, but I'm not doing that to drives with data on them. I have available this SK Hynix drive, as well as an older SanDisk X300 that I can format at will (nothing important was on the X300), so I tested them in both operating systems. My Intel NVMe 660p 2TB was tested in Windows at approximately 2/3rds full, and my Samsung 860 256GB Linux drive was tested in Linux, with the OS running on the drive.

The Intel is certainly the fastest, despite being slow for an NVMe drive; flash is often limited by the interface, but much less so with NVMe, so Intel's QLC management takes center stage, and performance beats pretty much any SATA drive in burst usage, but it was be slower in sustained access. Unfortunately, the best test for this in my repetoire uses Linux, so we don't get to see that here for this drive.

My SanDisk X300 is an older, midrange SATA III drive, and is what I compare the SK Hynix with the most, since they are both 1TB, and the closest in every other way. This drive is no longer for sale, but it's treated me pretty well over the years. My Samsung 860 laptop drive is a great, modern competitor to this one, but it's only 256GB, so it's also not a good comparison, since SSDs with more NAND chips tend to perform faster. But I threw it in the mix where I could (and it had enough free space).

The first, and simplest test in Windows is with CrystalDiskMark 6.0.2 x64 edition. I always choose the largest test size and test count, since some drives will dramatically slow down over time. I have the three tests (Intel, X300, S31) listed below. 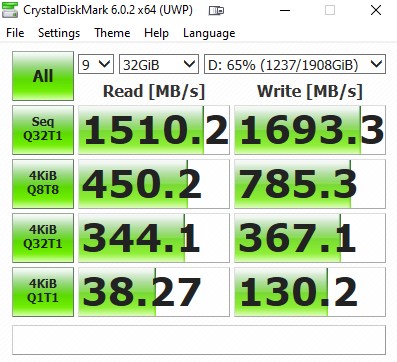 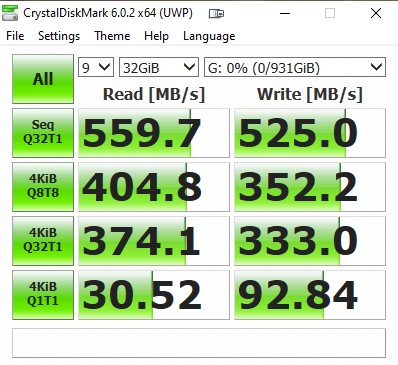 Strong Points: One of the fastest SATA SSDs I have access to; excellent performance consistency; sturdy casing; excellent warranty
Weak Points: They don't offer 2TB+ sizes yet; it's not NVMe

As you can see from this simple test, the Intel NVMe is the fastest in most use cases. That is not at all surprising. The SanDisk X300 takes up the rear, with respectable sequential numbers, but a dramatic fall-off after that. The SK Hynix is right up the middle, with very good speeds in the higher queue depth scenarios. As future testing will show, these middle tests end up being much more indicative of real-world performance than the mostly ideal sequential tests.

Next, I rebooted into Linux, and did some heavy write testing. I couldn't use the Intel drive, so I first did sequential disk writes, using 'dd'. DD is a tool that allows you to write data directly to or from disk, in a direct binary stream. It's very fast; I've used it to write GB/s in a work context. This is the command I used:

So, I wrote 100GiB of zeroes to each drive, the SanDisk and the SK Hynix, as fast as the drives would take the bits.

It ended up doing a sequential write at a shockingly low 212MB/s, after all of the cache was exhausted. That means that the real speed of the NAND is what you see here. This is why I chose a 100GB file; smaller ones could easily be influenced by cache sizes, but 100GB is too large for any cache system.

Well over two times faster! I was very pleased with how much faster this was. This drive is off to a great start.

The next test was a 50/50 read/write test, using a tool called fio. I had it write out 4 files of 10GB each, and then it performed a variety of r/w operations on them, this time with a 128KB block size. This was the command:

The SanDisk's results were the worst:

Next was the Samsung:

And last, and also best, was the SK Hynix:

During my time testing, I found that Windows doesn't really have an easy way to time copies, but during copying some directories around, that the SK Hynix S31 would consistently perform 2-3x faster for large copy operations, similar to my dd and fio results above. And it wasn't just faster in burst, indeed it wasn't always, but where it counts - in sustained throughput. I found that when I tried copying 800+GB to the Intel SSD, the sustained performance would drop off massively after around 100GB of copying, to the point where you wouldn't see much more than 100MB/s. This drive was consistently above 400MB/s. This is one workload where consistency is more important than raw speed, and the SK Hynix performs very well.

Overall, I am very pleased with the SK Hynix Gold S31 1TB SATA SSD drive. I have learned the hard way that DRAM-less SSDs can often have a large cost in performance (I tested one this summer that was slower than a HDD in some workloads) and it's really hard to know before purchase how a drive will perform. SK Hynix's new entry into the consumer SSD drive space is excellent; they have a high-performing, reliable drive, with a fantastic warranty. It's also much cheaper than other high-end competitors, though it is appropriately more expensive than the lower-end DRAM-less SSDs that are out there. Considering how much it slaughtered my older X300, which does have DRAM by the way, I can safely say that this drive can likely compete with the faster SATA III SSDs out there. For the very reasonable price of $119 for 1TB of space, it's an easy recommendation.