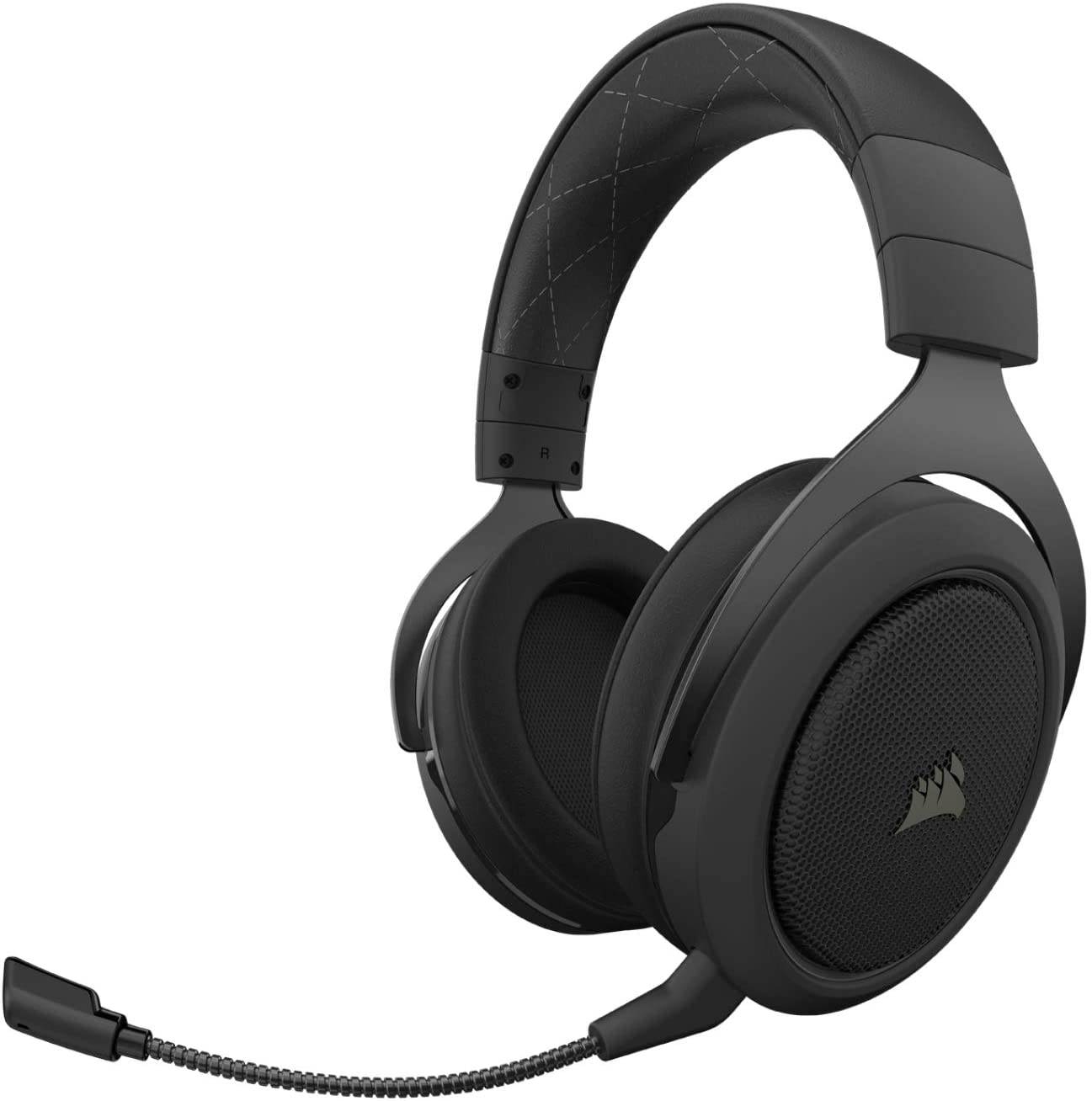 Thank you Corsair for sending us this headset to review!

I've kind of been on a headset reviewing spree lately, having been blessed to check out several from different manufacturers, and I've come to really think about something: what is it that defines 'the best', or 'my favorite' when it comes to headsets? Is it sound quality? Is it comfort? How about connectivity? Of course it's likely some combination of all of those, and I am really surprised just how many boxes this Corsair HS70 Bluetooth ticks, making it most certainly in the running, if for no other reason than because of just how flexible it is.

I suppose I'll start with comfort and sound quality, because without those, no headset (or headphones) are worth pursuing further. Comfort-wise, it's pretty good; it fits my larger noggin, as well as my larger ears, with reasonable ease. I do have to adjust them periodically, especially as they get warm, or put a bit more pressure on one spot than I'd prefer, but nothing about the comfort is so bad that I wouldn't otherwise wear them. My rather large ears do exceed the size of the still generous pad opening, but thankfully they are fairly soft, and don't cause significant pain even after long sessions.

Sound quality is something I've found to be somewhat subjective, but based on my preferences, I consider them fairly bass heavy out of the box; enough so that with certain songs, the bass can overwhelm the rest of the output, with a rare song driving them to the point of distortion at higher volumes. I don't know if it's because I got used to them or if they broke in, but it did seem to improve a bit over time. Regardless, the most guaranteed fix if you hear that is to either turn it down a tad (distortion is usually a function of volume) or what I prefer, apply a bit of EQ (modify the graphical equalizer).

On my LG V60 Android phone, or while connected to PCs either via 3.5mm jack or USB, applying EQ is very easy. When connected via USB, you can install iCue on Windows, and there is a built-in 10-band equalizer that works great. LG phones are known for their audio quality, and I have a built-in 10-band EQ there as well. Applying EQ is not as easy for games consoles, though to be fair it's also not as critical, as often we're not doing critical listening like we might be with music. And the issue doesn't show up at lower volumes, such as the output controllers or portable gaming systems have.

Strong Points: This is by far the most convenient headset I have ever seen, much less owned, with tons of connectivity; included cables are of high quality; good audio quality; DAC is high quality and low noise; efficient; reasonably comfortable; software includes a nice, 10-band equalizer; volume wheel is analog and works great

Weak Points: Bass-heavy default sound profile could be better, but easily fixable via included EQ; pads get warm after a while; microphone pop filter doesn't stay on and is very easy to lose, as is the mic port cover; 3.5mm cable is quasi-proprietary

My preferred EQ is relatively simple; I just have a gentle upward slope, about -3dB down at the lowest bass frequencies, up to level at around 500Hz. I also prefer to brighten up the top end as well just a tad, say 8k and up, but that's to personal preference. After doing this, I was able to hear all frequencies clearly, which shows me that the driver is overall of a reasonably high quality. Cheaper headphones can't be saved no matter how much EQ you use.

The build quality is what I would consider good, with strong plastics, some metals, along with foam and rubber. I could see it becoming somewhat brittle around where the headband merges with the ear cup brackets, as there is not a lot of play, or swivel in the cups, which makes them somewhat more vulnerable to unexpected twists. Nevertheless, they seem plenty sturdy otherwise.

It's probably worth pointing out that these headsets have a sound signature that's fairly common in gaming headsets; when I compared it to others I had side-by-side, I was reminded that they seem to be aiming for a sound that is common in the industry. The real question is what makes these so unique, or compelling? I have to say that I have never used a headset that's thought of nearly everything - but these have, and the feature set is just a home run - and then some.

This HS70 Bluetooth combines the three main common kinds of headsets - Bluetooth, USB, and 3.5mm analog - and combines them into one, in a most glorious way. (The remaining common type, the wireless 2.4GHz USB type, is not represented, but Bluetooth is a perfectly reasonable stand-in for many use cases.) You can connect them to your phone via Bluetooth, and take phone calls or listen to music. You can also connect them to your desktop or laptop via USB, and listen to whatever you prefer there, with a nice 24-bit/96KHz DAC built in. You can also connect them to your favorite game console via a 3.5mm audio jack - either the plug built into the controllers on PlayStation or Xbox, or right into the plug on top of the console on a handheld Switch. And if that wasn't enough, you can do all three - AT THE SAME TIME.

You have no idea how incredibly liberating this is, until you need to do it yourself. In my work from home setup, I have a work laptop, my gaming desktop, and my phone near me at all times. With this headset, I can be connected to all three at once, and hear the output of any of the three at once. The microphone even somehow works - all of the connected devices get the same input. This is just so awesome, I can't even express it. 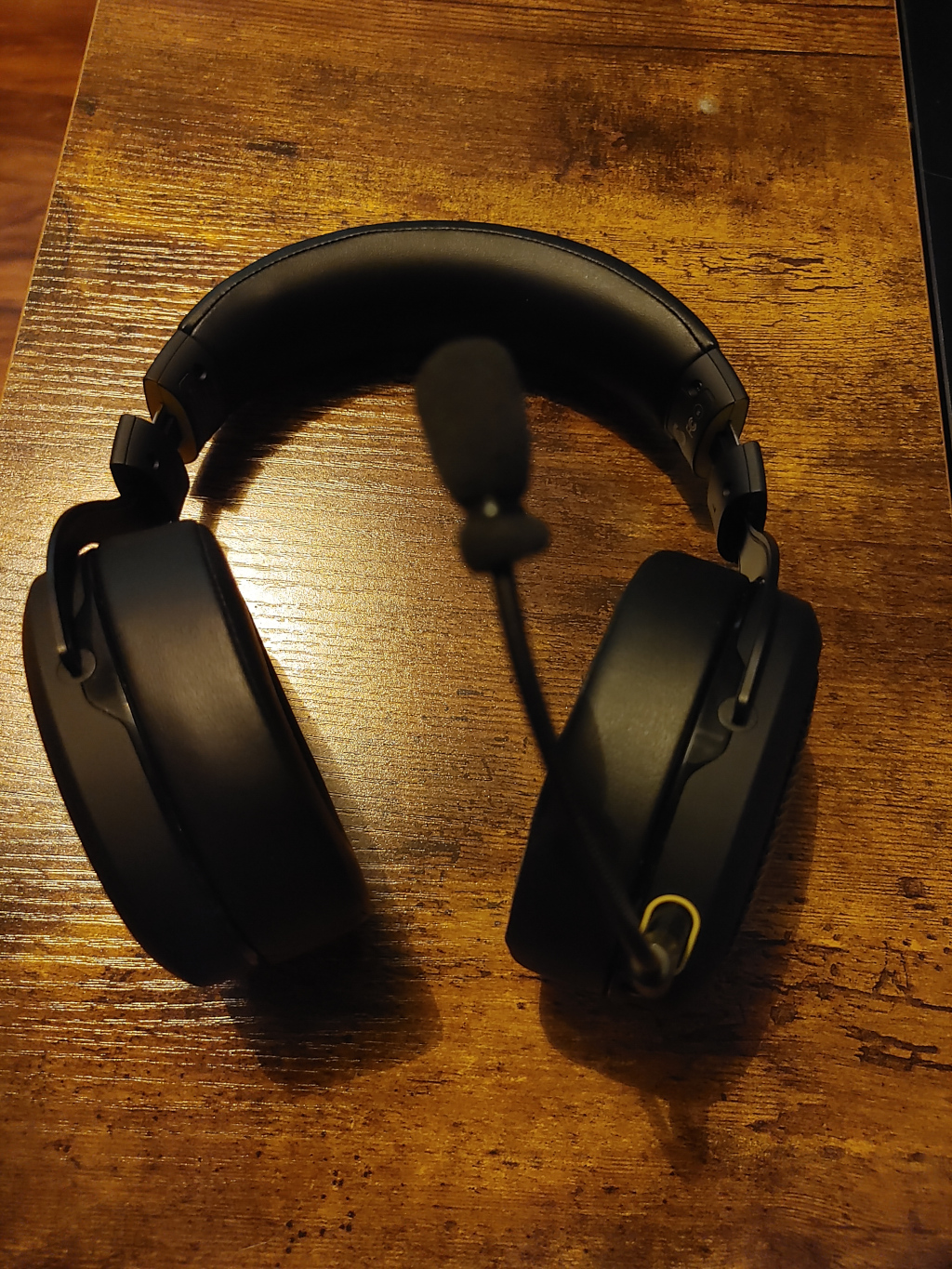 And if that wasn't enough, Corsair even thought of what to do if someone wants to connect more than one Bluetooth device at a time! While it does not support output from two Bluetooth devices simultaneously, it can switch between the two - when your Bluetooth connected PC has output, it keeps it until the Bluetooth connected phone has an alert, during which the PC goes silent, and the phone takes over. Once the phone is silent for about a second or so, the PC takes over once again. So yes, if you're counting, you could have four devices connected at once. It's just unreal.

One of the strange quirks of the design is that the included 3.5mm audio cable has a TRRRS connector on the headset end, and the more common TRRS connector on the other to plug into your devices. This cable works completely as expected; the headset does not require the power to be on, and any analog device connected to the 3.5mm jack seems to power the headset drivers directly. To my surprise, it can sound even better when connected to a powerful headphone amp, which you can do this way.

However, that TRRRS jack doesn't work properly with a standard TRS or TRRS cable connected in its place, while the headset is powered off. If you power on the headset, which you normally only need for Bluetooth mode, the jack can then auto-sense the type of cable connected, and it suddenly works with any and all cables that I was able to test it with, assuming the cable is skinny enough to fit within the slightly recessed jack on the headset. This is just... crazy. I mean I've worked with a ton of headphones and headsets over the years, and I've never seen anything like this. Anyway, thankfully the TRRRS jack that the headset includes is technically a forthcoming standard, so it's technically not proprietary, though I do wonder what Corsair had in mind using such an odd connector with no obvious additional utility over the TRRS connector more commonly in use. Hopefully, Corsair provides a replacement cable at a reasonable cost, should one be necessary.

Pairing Bluetooth devices is fairly simple; you press and hold the power button to turn it on, and keep holding it until it beeps again. I had no trouble pairing it with my phone, and then again later with my desktop PC, which is how I determined it has a 'second device' mode. Battery life has been great in my time testing it, though to be fair, since it can connect to so many devices at once, it's hard for me to resist the urge of doing so, so my battery rarely dropped below 80%. I have no reason to doubt Corsair's claim on 30 hours of life unplugged so far. I guess one thing to note is that when I connect my headset to my PC via Bluetooth rather than a wired connection, there is a mild but noticeable delay introduced; somewhere around 100ms, though I can't be certain on that number.

The Corsair HS70 Bluetooth met and exceeded my hopes and expectations, with the incredible feature set and connectivity. I will say that the included pop filter for the microphone falls off way too easily, and the dust cover for the microphone port is also way too easy to lose. Outside of that, and my preference to apply some mild EQ, these headsets are just great, plain and simple. They sound quite good, are reasonably comfortable, and can connect to almost anything. Highly recommended.