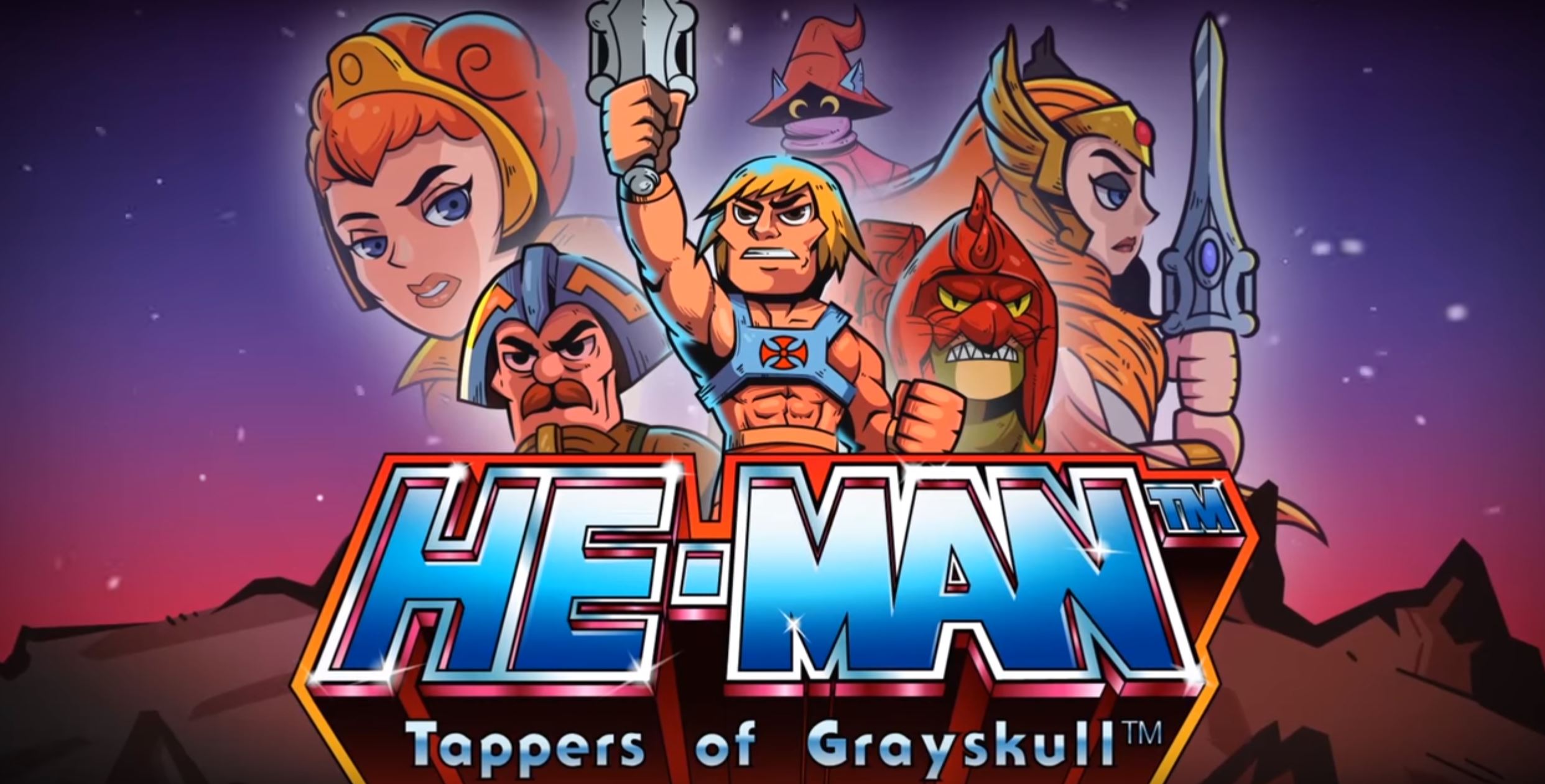 Thank you PowerCore for sending us PowerCore tokens for this game!

Since I was too busy playing Barbies, My Little Ponies, and Strawberry Shortcake toys, I didn’t pay too much attention to the He-Man and Teenage Mutant Ninja Turtle action figures that my brother played with.  I do remember seeing the show and am familiar enough with several of the characters present in the rebooted franchise’s mobile game.   Of course, there’s He-Man the main character, but by his side you may see other notables characters including She-Ra, Teela, and Man-At-Arms. If you remember the original show, you’ll be happy to hear that many of the original voice actors reprised their roles for this app.

This is a rather simple game and the story reflects that.  Skeletor has harnessed the power of the primordial crystals to supersize his army.  By the power of Grayskull and with the help of his friends, He-Man must save Eternia from Skeletor’s minions.

Taking out the oversized monsters involves tapping on them while He-Man’s friends will engage the enemies automatically.  He-Man doesn’t start off with friends though.  They’re unlockable after you have enough money to recruit them.  Money is also needed to level them up and to unlock their skills.  For each level gained their damage per second will increase.  It’s fun watching the damage go from single digits to hundreds, thousands, millions, billions, trillions, and beyond!  Instead of quadrillion, the abbreviation "aa" is used. 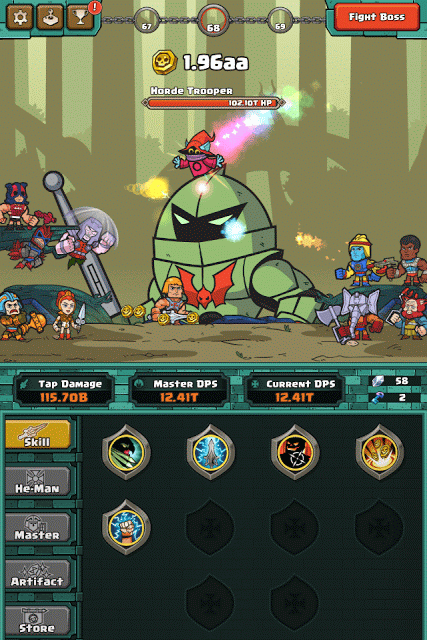 There are several stages per level with a final boss that must be defeated before advancing onto the next area.  While you can take your time whittling down the standard enemies, the bosses are timed.  If you see that you won’t be able to take them down in time, you have the option of retreating and grinding on the lesser foes until you’re ready for a re-match.    He-Man has several power-ups at his disposal, though they are often timed and have an even longer cool-off period.  For the tougher bosses I would summon Battle Cat (remember him?) who would help for thirty seconds or so.

More powers and abilities can be unlocked by collecting all thirty-seven of Eternia’s most powerful artifacts.  Artifacts can be summoned with keys that are earned by time traveling/resetting your stats.  Fortunately, it doesn’t take too long to become powerful again.   In fact, money is automatically accrued for you when you’re not even playing the game!

The last way to power-up your characters is by using Power-Core tokens which give your characters a permanent boost plus a maximum of five gems a day per token.   I don’t know how much these tokens sell for, but they’re available at Super7 stores. 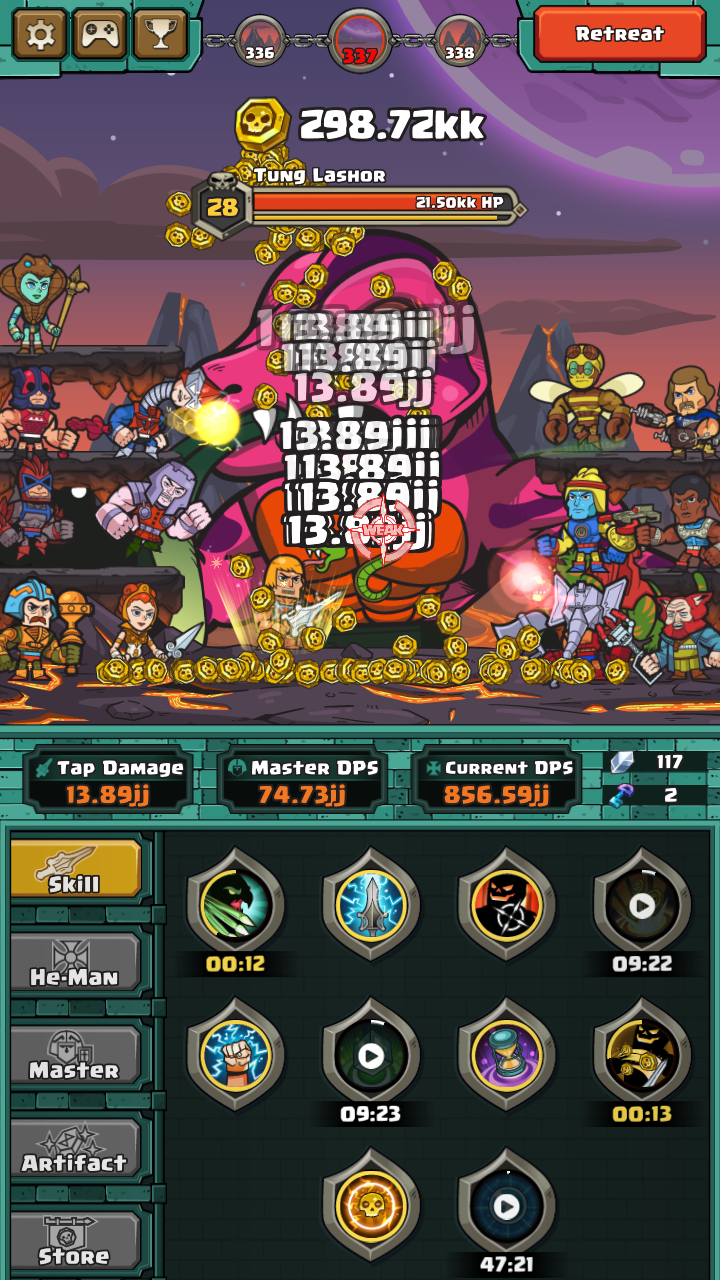 Like many free to play games, He-Man Tappers of Grayskull offers perks if you’re willing to spend real money on them.  You can spend $5 apiece on permanent damage per second boosts and increased gold drops.  Through your battles you’ll spot Orko flying around and if you tap on him you’ll either get a free power-up or the option to watch a short video for gold or gems.   The videos consist of ads for other mobile games and sometimes they’ll conveniently take you to the store page to buy or download it.

Parents should lock down their devices or better yet, monitor their children while they play this game so they don’t purchase any of the add-ons without permission.  It is possible to trigger an ad unintentionally; thankfully the ones I have seen have been family friendly thus far.

This game ran fine for the most part but I did run into a glitch or two worth noting.  One issue I experienced was that sometimes the tapping would cause He-Man Tappers of Grayskull to lose focus and bring me back to my mobile desktop.  Thankfully my progress wasn’t lost when I resumed the game.    Another nitpick I have is that you have to rely on the Android menu icons to exit the game instead of an exit option within the game.

He-Man Tappers of Grayskull can be fun in short spurts, but it will get repetitive after a while.  To mix things up a bit there are tournaments to participate in, though they require resetting your party to enter them.  It’s fun to do boatloads of damage and watching your damage per second soar adds some thrills to this otherwise simple game. Fans of the series may want to look into this app if they don’t mind the ads and can resist the temptation to buy unnecessary power-ups.