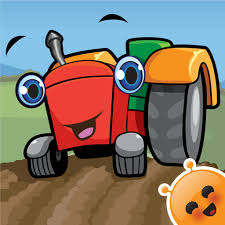 Thanks very much to Divine Robot for the review copy!

CotBot Farm is a kid's game that allows a player to explore a farm in a 3D environment and play mini games that represent various farm chores. With an extremely simple interface and simplistic gameplay, this one will appeal to small children who are just learning to use a tablet or phone. Mostly I let my kids play this one so I could see how well they enjoyed it. I then played it myself to get a feel for how it works and what all of the options are.

The game is played in two modes. The first is a 3D environment where the player moves around the farm as their chosen avatar, selected at the beginning of the game. The current avatar can also be changed at any time in this mode. Available avatars include vehicles one might find on a farm like a pickup, a harvester, or of course my son's favorite, a monster truck. The player can also choose to be a horse or cat and stroll around the environment. In the case of the cat, passing other cats on the farm causes them to start to follow the player's cat. My daughter was delighted by this and only plays the game to run around accumulating as many as she can find.

When moving around the farm, the steering is handled by physically tilting the tablet left and right. A large button on the bottom right corner flashes when the player is near a site on the farm where a mini game is available. There's no throttle or brake, but picking up gas cans on the farm gives the vehicle a short speed boost. (When playing as the horse or cat, nothing happens when riding over the gas can.) Being able to brake or reverse would be nice, since the vehicles steer wide. It can be a bit of a pain to get turned around and try again if you miss something you wanted to drive up to or over. 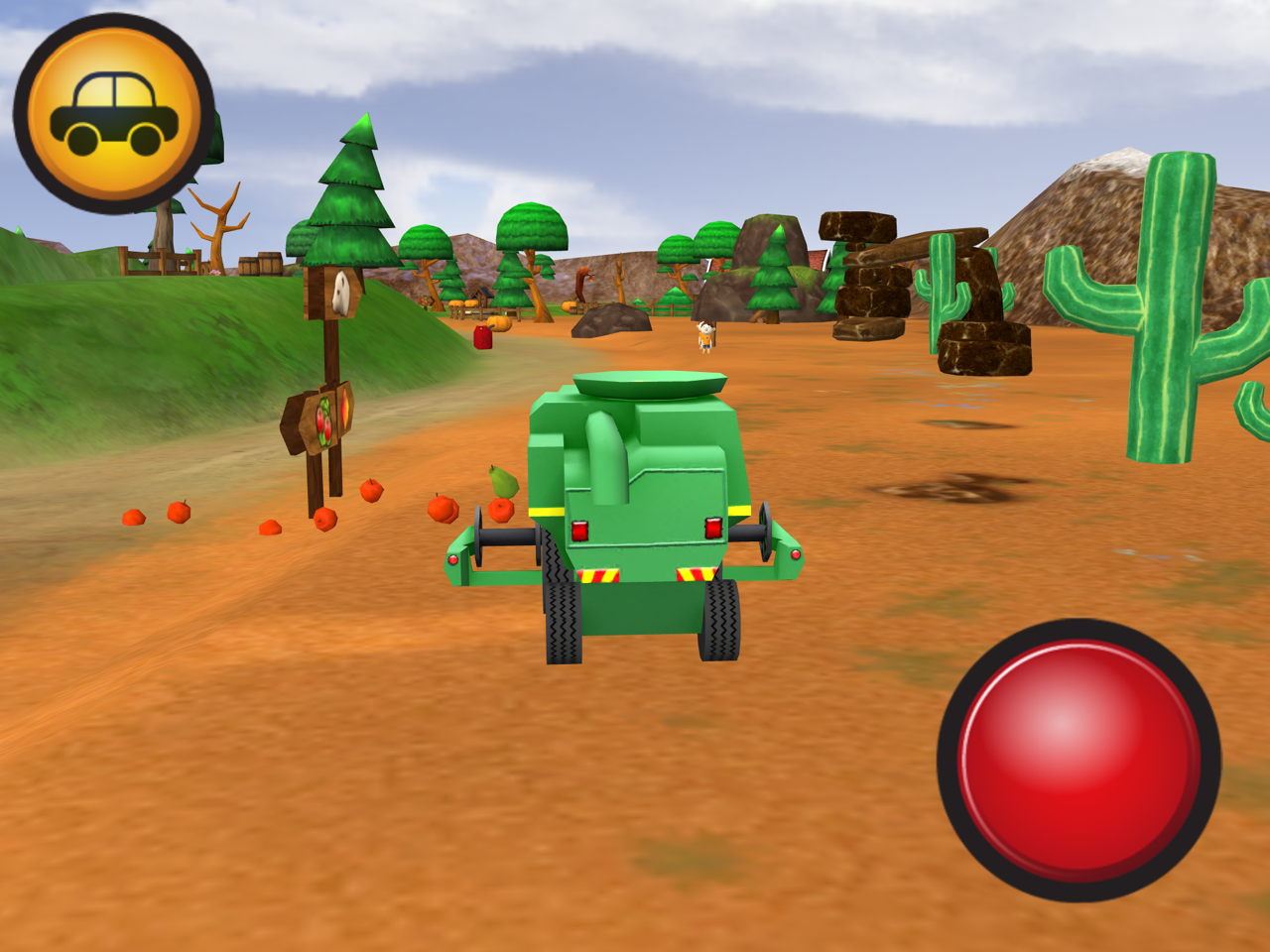 Most obstacles on the farm are unbreakable, and a vehicle or animal that runs into them will simply stop and slide around it. Some items can be broken up when hit, such as piles of fruit or pumpkins. Running over a pumpkin causes the vehicle to spin out and then resume its previous direction.

The second mode is the mini game mode. In various places on the farm one can find mini games like fishing, shearing sheep or growing vegetables. These mini games are incredibly simplistic and not at all challenging. This is good for the very young players, but I can tell you my kids got bored with that part of the game fairly quickly. For example, in the sheep shearing game, the player simply slides their finger over the sheep which causes its wool to fly off and into a sack. Once completely shorn, the sheep moves on and is replaced by another. This repeats until the player exits. That's it. There's no score, a sheep doesn't move until it's completely shorn, and every one is the same. The vegetable garden game involves dropping seeds into holes, watching the veggies come up, then tapping them to harvest. This mini game at least lets the player choose which vegetable seeds go into which hole. The fishing game involved tapping the screen to throw the line, then tapping a fish to hook and reel it in. Occasionally a sharklike fish swims by and it's possible to hook a boot, if you want to.

This game has no multiplayer mode, which is a good thing considering it's for the little ones. 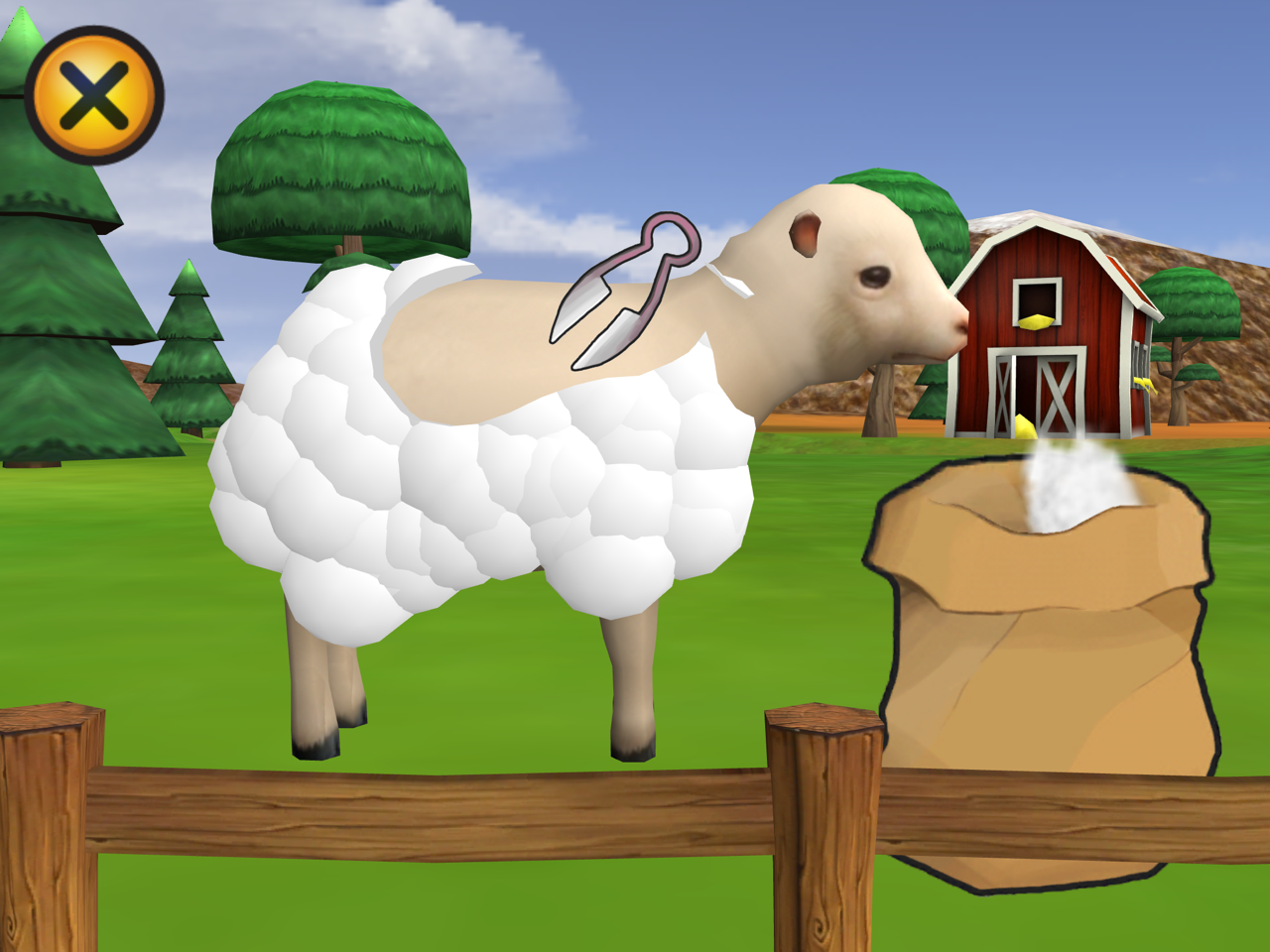 The 3d graphics are simple and cartoonish, though in the fishing game there's a mix of 3d graphics (the fisherman on the dock) and regular 2D animation (the fish in the water). That style choice seems a little weird to me and seems to only put greater emphasis on the fact that it's a game, and not an immersive world.

The sound effects are adequate but not particularly memorable. A lot of game events have no sound effects at all, however, and the absence is noticeable.

The game didn't have any crashes or issues that I detected.

There aren't any moral issues here. It is possible to drive your vehicle into the people and animals hanging around the farm, but hitting them is like hitting any other impassable obstacle. The vehicle just stops until the player steers around and the person or animal run into does not react in any way. This discourages kids from playing that way by being nice and boring.

The game is cute and has a neat concept, but it just feels more like an unfinished demo to me than a full fledged game. I realize it's meant for the little ones and my expectations might not be entirely reasonable. It's just that my own younger kids (9 and 5 years old) loved it at first, but quickly got bored of most of its features. I think the problem here is that CotBot Farm is targeted for a very narrow age bracket of children who are old enough to operate the game's controls and yet still young enough to find the content engaging. The highlight of the game is the ability to drive a variety of vehicles or animals around the farm in a 3D environment and that feature is what saves the game.