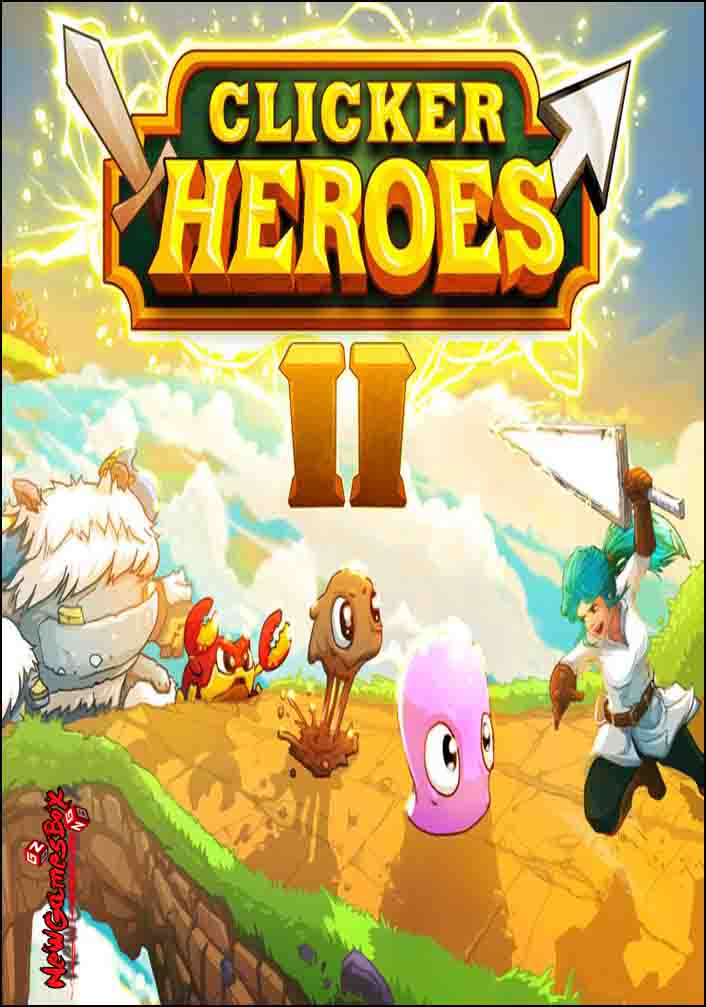 Thanks Playsaurus for sending us a copy of this game to preview.

Since I never did play the original game, I’m not entirely sure what all is new to this version or what features from the first one are currently missing. With this game being a pretty recent early access release it is missing a lot of features. There are a noticeable number of “coming soon” areas present in the current game, but they do seem to be planning on updating it fairly regularly. That does leave me to my biggest complaint so far which is every update wipes saves. That might be the biggest fault of it right now since this type of game requires a decent investment of time. 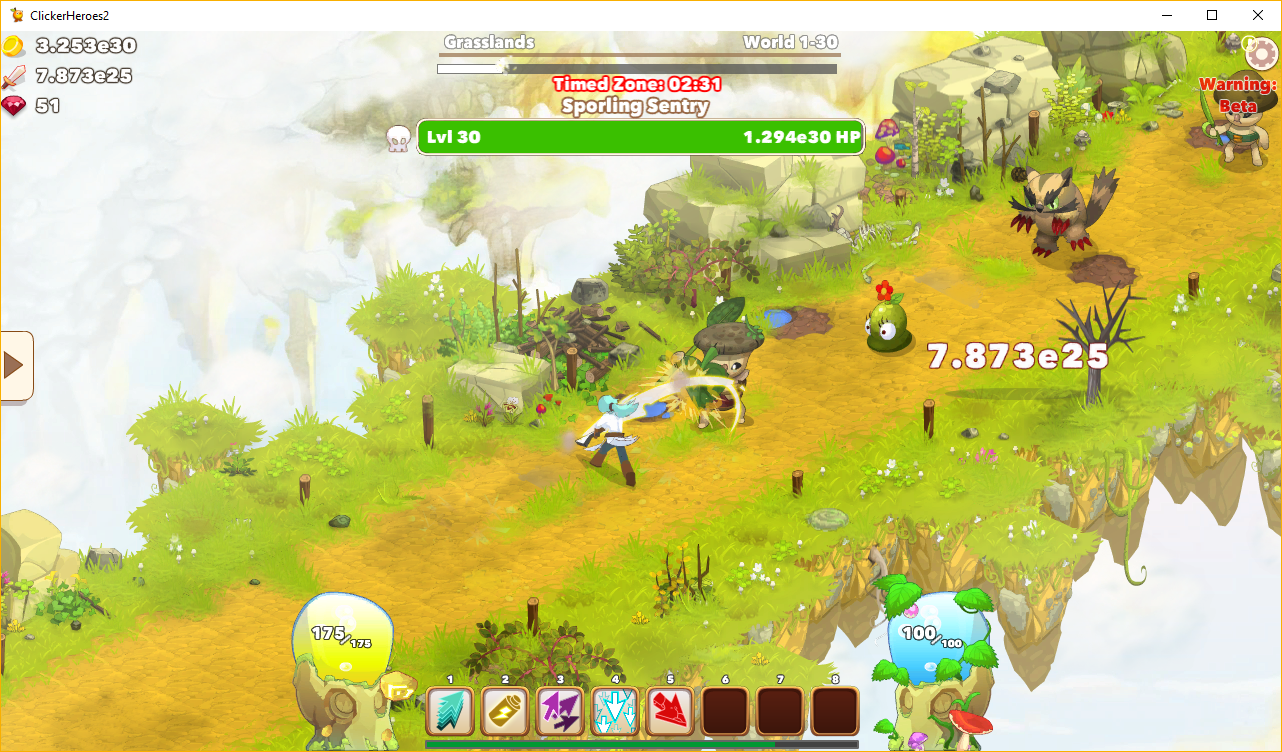 Strong Points: Interesting changes to the standard clicker formula; Nice art; Cool sounding ideas.
Weak Points: Game is updated frequently which comes with save wipes; A lot of features are currently missing; Game must be running for things to progress.
Moral Warnings: The slaying of different monsters; Some magic is present.

In my time playing between wipes I was able to experience a good bit of what the game has to offer. Clicker Heroes 2 plays like a mix between a clicker game and a role-playing game (RPG). As you progress and collect money, you are able to buy different pieces of armor which give you some buffs to various stats. It looks like it will be a system which will allow the creation of different types of builds. This should work nicely with the different characters you can get. Currently, there is only one character you can control in the game, but there is a section that shows that there will be other adventurers you get to play with. One other big feature is the stamina and mana resources. Your character has an auto-attack they will do, but you will do more damage by clicking. Every click costs stamina that is only regained from auto-attacks and abilities. Some abilities cost stamina, while others cost mana. Mana only regens over time and it does so quite slowly.

There is one other big feature which is some kind of automizer for abilities, but due to the wipes and another issue I’ll get to later, I was never able to unlock it so I could test it. The other thing I found that slowed down progression was that you had to have the game open and running to be able to gain any money. Other clicker games I’ve played also gather resources when you aren’t playing it. In addition to that, I only appeared to gain experience when I was actively clicking. If I left it running in the background, all I did was gain money. I was never able to get enough experience to gain enough levels to unlock the higher level skills. 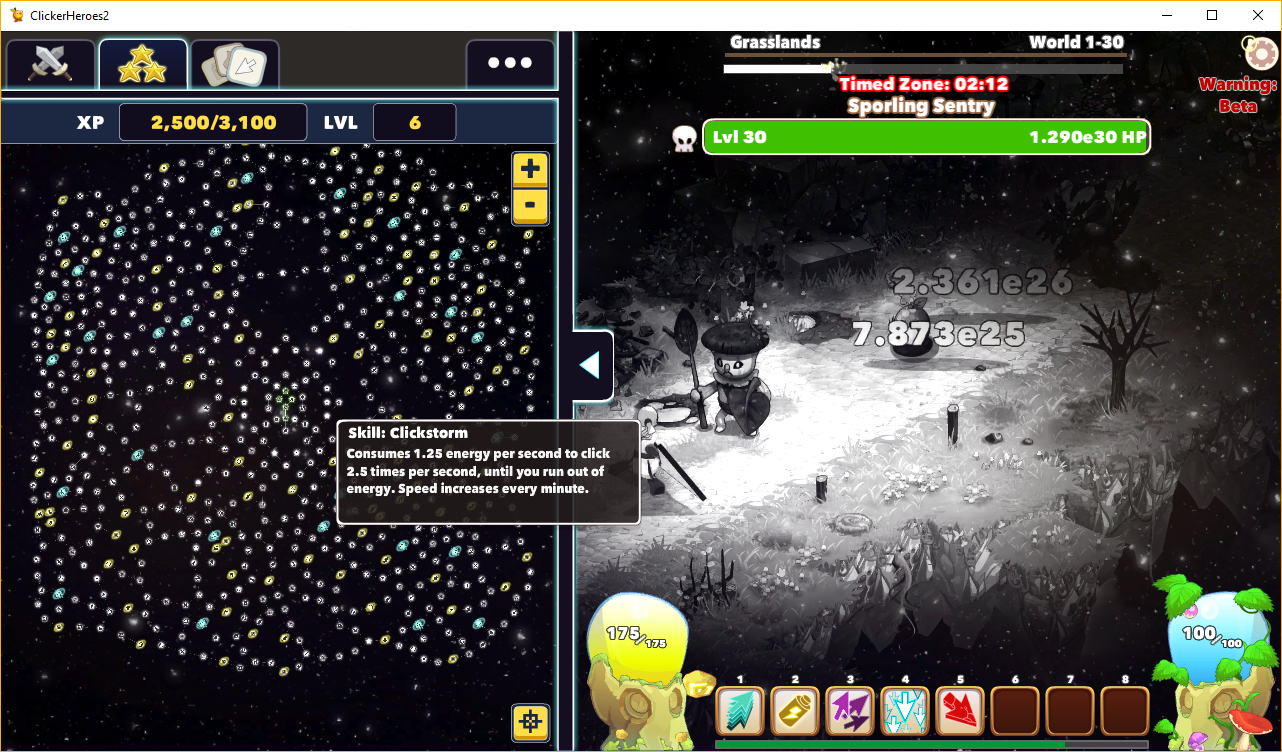 The art style in Clicker Heroes 2 is fairly good. Enemies all look a bit cartoony in design, but there isn’t much variety at the moment in terms of enemies. One thing that did surprise me though was the character animations. The attack animation of the character currently is quite nice. I really look forward to them adding in other characters just so I can see what they look like. The current level they have looks good, but some of the ones they show off on the Steam page look much more interesting. Music was okay, but I quickly muted it once I realized I had to have it open at all times to progress. I didn’t notice any bugs with the game. Controls were also okay, but everything you do you just do with the mouse. One thing I would like is for the game to explain some stuff a bit more. There are a lot of stats that I had no idea what they did. I also only discovered by accident that there are areas of the map I could interact with to gain some bonuses.

The game does have a bit of violence with you killing enemies, but it isn’t too violent or gory. When you attack, your character just swings their sword and the enemy gets knocked back a bit. I didn’t notice any foul language, but I could see that a lot of the enemies had joke names so you could see some down the line that were referencing something bad or dirty. There does appear to be magic in this game, but all I was able to do with my mana was recharge my stamina, though it does look like the next character will be a magic user. There is an enemy goat that has a demonic name.

As of right now, I would only suggest this game to really diehard fans of the first game. At its current price, how frequently save wipes are, and how long it takes to level, I don’t see you getting too much out of it if you are a regular player. Now, maybe once there has been an update that adds a bit more stuff in and they decrease the frequency of save wipes, I’ll hop back in and play some more. I just find these types of games to require too much time investment to be constantly starting over again. The game looks like it will be something fun in the end, but it is a bit too early for most people right now.