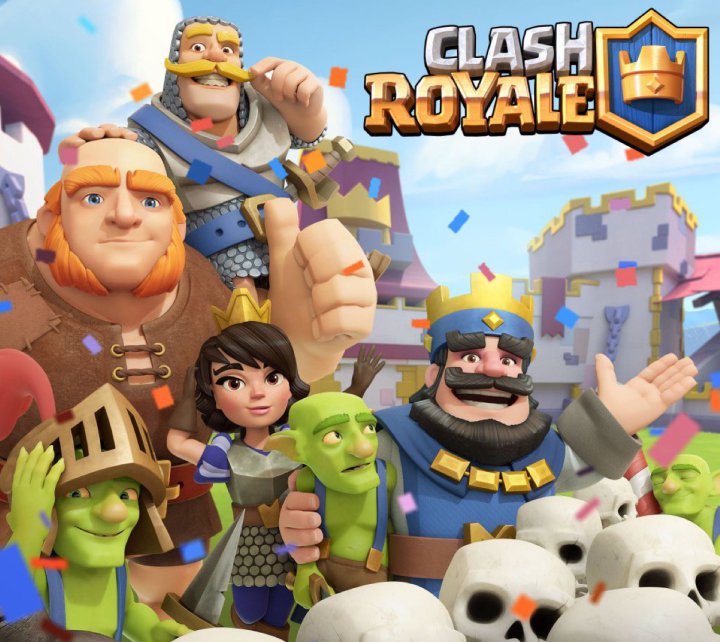 Clash Royale is a spin-off game of the popular Clash of Clans.  The game has two players face off against each other by deploying different cards onto a small battlefield.  Clash Royale borrows a bunch of troops from Clash of Clans, while also having entirely original troops join the battlefield as well.

The 1st place is the shop area.  This is a place where you can buy coins, gems, chests, and cards.  Gems are used to buy most chests in the shop and unlock them immediately, along with buying coins.  Gems are obtained from specific chests and can be bought with real money.  Coins are obtained from, as I mentioned before, gems, and can also be gained from donating cards and winning battles.  Chests are bought using either gems, coins, or real money if bought through a special pack.  Chests will give you coins and cards, and depending on the chest certain rarities of cards are guaranteed.  Three cards are placed in the shop for you to buy, changing daily (on Sunday you can buy six different cards).  Every so often you can get a special deal in the shop that will cost you coins, gems, or real money to obtain.  I normally don’t do much here unless there are cards I use that are being sold and I want to buy some.

When you start up a battle you will be placed in an arena to battle another player in.  Both you and your opponent have three towers and your goal is to destroy more towers than your opponent.  There are two crown towers and one king tower.  If you destroy the king tower you automatically win.  You will also have a deck of cards to play as well.  Each card costs elixir and depending on how strong the card is, it will cost either more or less elixir.  For example if you had a card that deploys four pathetically weak skeletons, then it would only cost 1 elixir, while if you established a strong golem, then it would cost 8 elixir to place.  For this reason you have to strategize and work your deck to work in offense, defense, ground, and air. 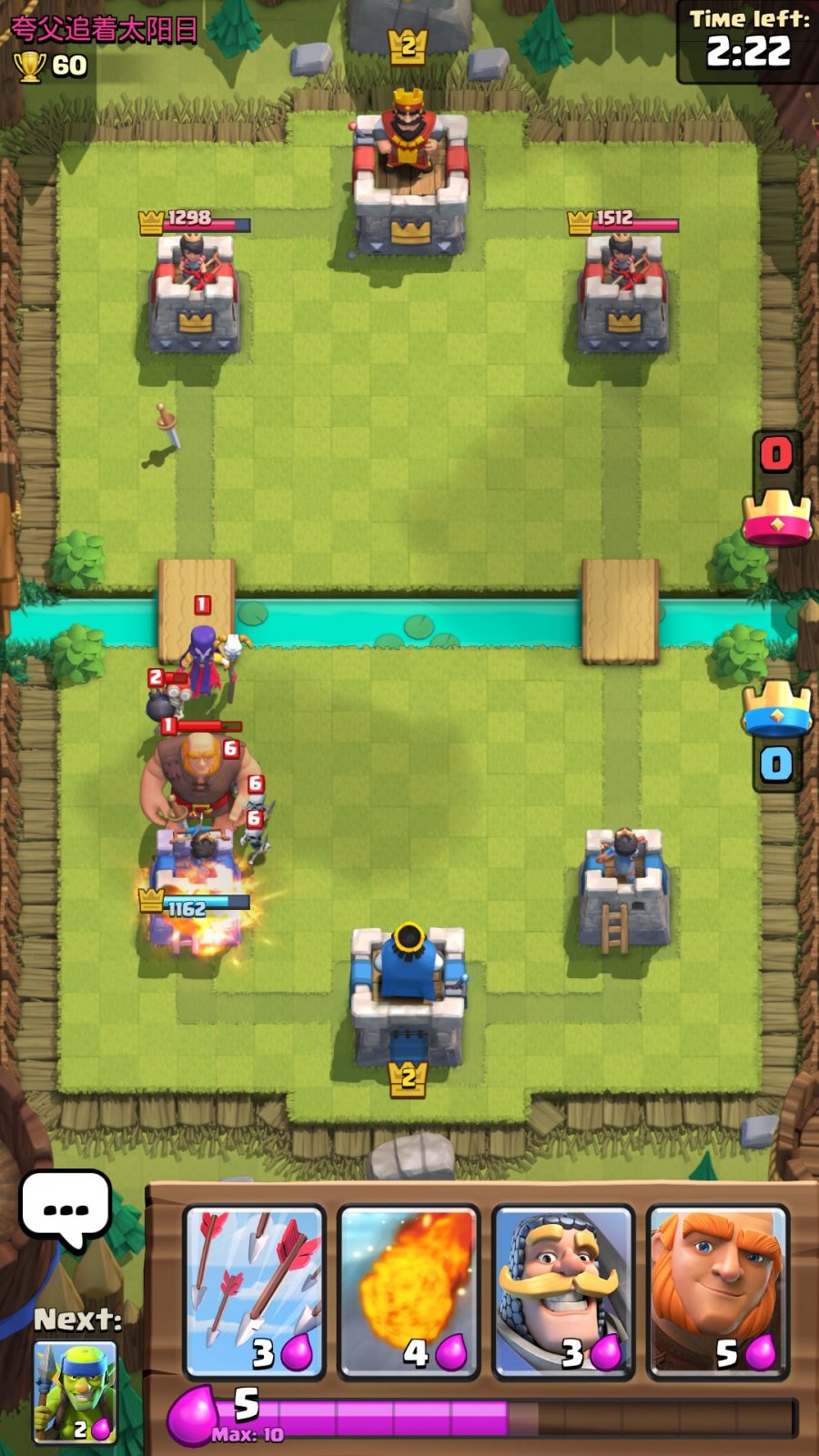 Strong Points: Extremely fun; nice variety of cards to use; stable connection in battles
Weak Points: Can get very frustrating; chest unlock times are a bit long
Moral Warnings: Cartoon violence; some cards deploy troops that use magic and other cards deploy spells

Battles will last three minutes unless you either destroy the king tower early, or both you and your opponent destroy the same amount of towers, in which it will go to overtime and an extra minute is added to the clock.  If you win you will gain 1, 2, or 3 crowns (depending on how many towers you destroyed), a bunch of trophies, coins, and a chest.  If you lose then you will still gain the crowns, but you will lose trophies, and you won’t get any gold or chests.  There have been many times where I would lose a bunch of times and get extremely frustrated and upset about losing.  The reason being is that the amount of trophies you have will determine what arena you’re in, so if you gain more trophies you go to a higher arena, and if you lose trophies you will go to a lower arena.  Overall battles are extremely fun to play and is extremely well polished.  Also note that you are playing against another human player, not a computer.  The only time you play against a computer is when you’re battling against your trainer.

When you reach level three you can join clans.  Clans are little group type things in which you can chat, donate/get cards, and friendly battle other members in the clan.  Sometimes friendly battles can gain a challenge for a limited time where some special thing happens to the battle.  Also friendly battles are done according to tournament rules (see below).  The cards you can donate are common and rare cards.  Every Sunday you can ask for Epic cards, but you cannot ask for legendary cards at all.  Also every Monday a clan chest starts and all your clan members team up to get the crowns needed to unlock the chest in a set amount of time.  There are ten tiers in the clan chest and the rewards get better for each tier you finish, eventually getting to the tenth tier.

When you reach level eight you can join challenges and tournaments.  Challenges are pretty much the same as regular battles, but the rewards are different.  Each time you win, coins and cards will be added to the chest you will receive after the challenge ends.  You get the chest when you either win twelve times or you lose three times.  Just like friendly battles, you will be presented with the option to do a special challenge sometimes.  Also know that joining challenges does cost gems.  Ten gems are needed to join the Classic Challenge and a hundred are needed to join the Grand Challenge, with the latter having the better rewards.

Tournaments work similarly, but there are a couple rules added to tournament battles and everyone battles to gain the top prize in the tournament.  The rules to the tournament battles are that your king tower is leveled down to nine.  The common, rare, etc. cards are also leveled to a specific level, regardless of whether you're over the level or under the level.  Tournaments take two hours to create and last for an hour.  After the tournament is over you're presented with a chest (if you won anything) and it will take three hours to unlock. 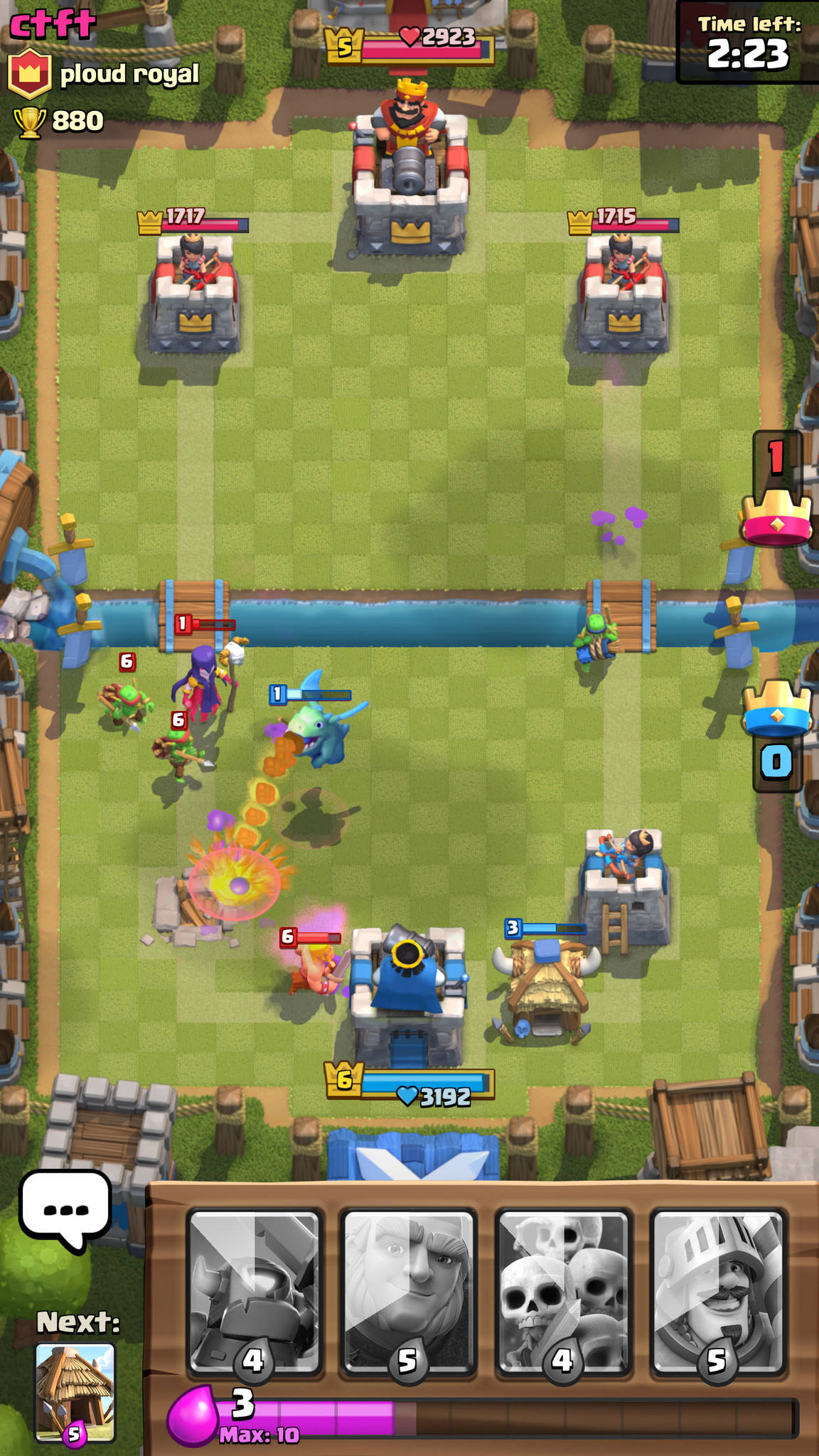 Chests are items you can obtain using various methods, but the main method is through battles.  There are different types of chests, some rarer than others.  Most chests have a specific time to unlock, ranging from three hours to a full day.  Once unlocked you can open it and you will obtain a specific amount of cards.  There are also different rarities of the cards.  Common, rare, epic, and legendary: common cards are of course common and you will see them in every chest pretty much.  Rare cards are a little bit more rare but you will normally find one pretty often.  Epic cards are pretty rare to get and unless you have a very rare chest you won’t be getting very many if any from chests.  Legendary cards are extremely rare to get and you’ll be pretty lucky to snatch one of these cards.  The only purpose of the crowns you obtain from battle are for the crown and clan chests.   I like how this system works, but I have an issue as well.  The chest unlock times are pretty long and even trying to get a couple of common cards from a silver chest takes three hours, which can get annoying.

The sound is this game is good for the most part.  The sound effects are very well done, but the music could be better.  The graphics were very well done and everything looked very clean and pretty.

The game gets updated very often and will normally add a couple new cards per month.  They also release “balance” updates that balance out different cards so that they aren’t underpowered or overpowered.

There are a couple moral things to look out for.  One thing is that there is a ton of cartoon violence.  Another thing is that many troops in the game use magic as their attacks.  For example a wizard attacks by generating fire from his hands and a witch can summon skeletons from the ground.  There are also direct spell cards you can play, examples including a rage bottle or a lightning spell.  Depending on the clan you join there can also be foul language, but there are plenty of Christian clans to join.

Overall this game is very fun and addicting to play.  I can spend hours on it and not get bored.  There are also a couple voice clips that I found funny as well.  The only complaints I have is that chests take a little long to unlock and that it can be frustrating if you lose a bunch of times in a row.  This game can be either completely free or very expensive to play, depending on if you want to spend real money or not.  I'm one of those people who doesn't pay for in-game items.

(This game is often updated and some things I talked about in the review may get outdated. This review was made before the anniversary update came out)