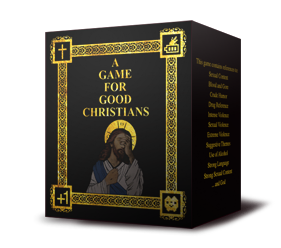 Thank you A Game for Good Christians for sending us a review copy of the game!

A Game for Good Christians was developed by Christians, Bible nerds, teachers, preachers and seminary students.  Just because it was made by Christians doesn't mean it's innocent.  In fact, the game is very mature and recommended for ages 16 and up by the makers.

If you really dig into it, the Bible does have a lot of mature content in it.  There's war, genocide, violence, and sexual acts recorded in it.  Needless to say, some Bible books and stories are best left omitted in graphical children's Bibles.  While I don't mind the obscure facts coming to light, my main gripe against this game is the cussing used to get the point across.

For example, in Exodus 33:22-23 when God let Moses see his glory as he passed by, wasn't God speaking out of his a**.  This game doesn't pull any punches on the controversial topics like Noah's encounter with his son in Genesis 9:22.  Their website goes more into detail on their stance regarding this being more of a sexual encounter than a mere observation. 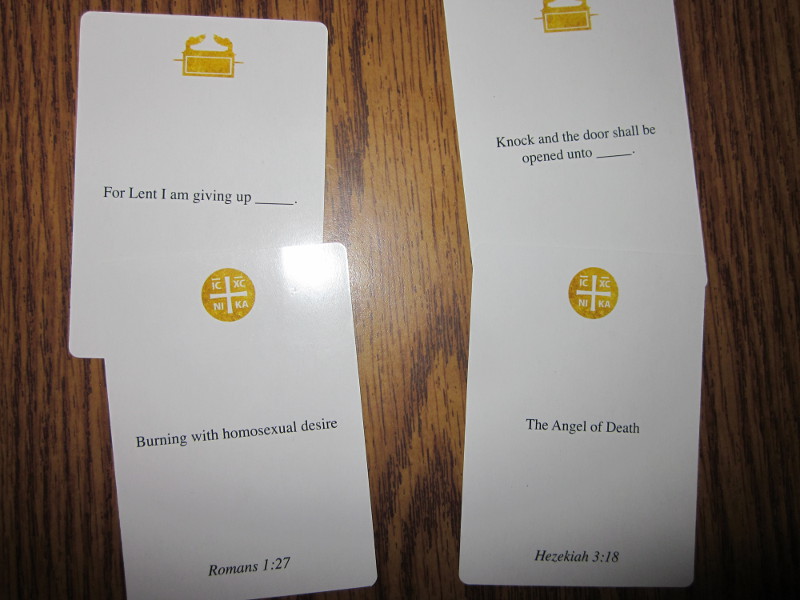 While I have read the Bible several times over, there have been moments where I had to crack it open to get the context of a few of the cards.  Believe it or not, this game can be a great learning experience!

Those  who have played Apples to Apples or Cards Against Humanity will be familiar with the game rules.  If you haven't played either of those games I will warn you that Apples to Apples is more family friendly.  The cards themselves are glossy and high quality.  The text was easy to read for my husband and I, but my mom needed to wear her glasses to play.  The facepalming Jesus graphic on the back of the cards is in color and priceless.

The game play is simple and easy to learn.  There are two types of cards: creed/topic cards and canon/player cards.  Each player gets seven creed cards and takes turns being the Pharisee or judge.  The Pharisee draws a creed card that will require one or two response cards from the players.   After they have been anonymously given to the Pharisee, they will pick a winner based on humor or accuracy.  The winner will get to keep the canon card and the first to collect five cards, wins. 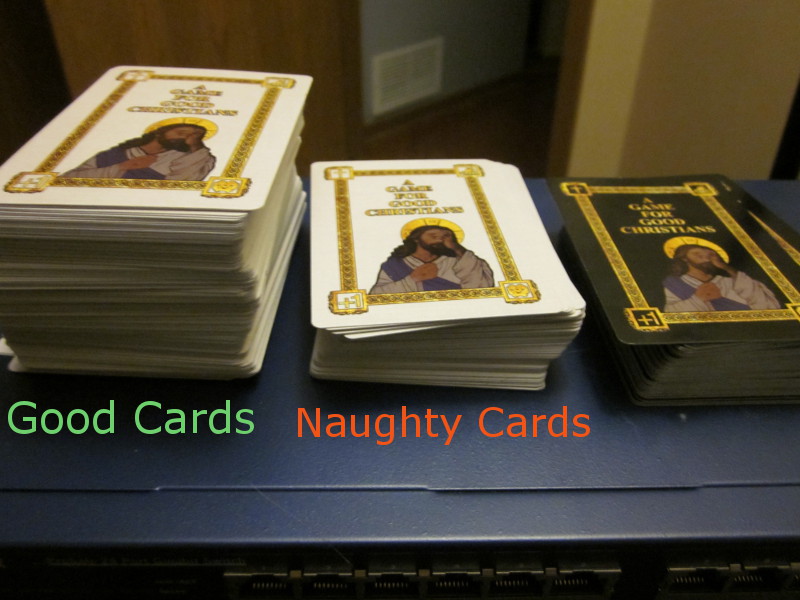 For reviewing purposes we played this game in two forms.  The first time my husband and I played it intact with my mom while she stayed with us for a couple of days.  We played a couple of rounds with her and she enjoyed it and looks forward to playing it again the next time she is in town.  The second form was with our kids after we removed objectionable cards from the deck.  The cards removed had bad/crude language, body parts, or sexual acts we'd prefer not explaining to our kids just yet.

In order to play this game with our kids, we removed about 40% of the deck.  Despite wishing we removed a couple of more cards, we all had a good time playing this game. Not surprisingly, the kids tended to go for the silliest answers over Biblical accuracy.   Even with the suggestive and foul language cards removed, there were plenty of silly answers provided.  So given that this game can be fun without the  crude content, it begs the question as to who the target audience is.  Conservative Christians will be put off by the harsh language while non believers may be intrigued at how this game pokes fun at the Bible.

Would Jesus play this game?  I cannot answer that question.  Yes He has a sense of humor and is the author of it, but some of the cards are blatantly disrespectful.  In the game's current form, I would not invite my pastor over to play it.  In the altered form, I may play it some more.