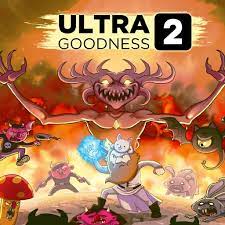 Thank you Ratalaika for sending us this game to review!

I haven’t played the original UltraGoodness so I can’t compare this sequel to it. There’s not much of a story to this twin-stick shooter game. You play as a Jesus-like character and have a trusty cat that will help slay the evil minions scattered throughout the forest, desert, and winter areas. Each section has ten levels with the final one being a boss battle.

You begin each level with five health hearts and your objective is to completely annihilate all of the enemies before you can advance to the next level. Like the popular game, SUPERHOT, time stands still unless you move or fire your weapon. The demonic enemies also tend to become alert and swarm your character as you get close to them, so it’s a better strategy to go slow and steady than running around guns blazing.

Strong Points: Fun pick up and play game
Weak Points: Can be beaten in a couple of hours if you’re good; Armageddon controls are a little awkward
Moral Warnings: The evil creatures will bleed and explode when attacked

As Satan's minions are blown apart and bleed all over, they’ll often drop power-ups and crystals. The power-ups range from speed and power boosts to multi-directional shots and bombs. Occasionally a replenishment heart will be dropped, but they’re not very common. The crystals are used for upgrading the attack patterns and overall strength of wannabe Jesus and his cat.

In addition to spewing bullets, the Jesus lookalike can use a bomb and Armageddon attack. Both have a cool-down period after being used. The bomb attack places one bomb that goes off when enemies draw near or after a few seconds of being deployed, whichever comes first. The Armageddon attack is a little wonky to use, but it’s quite powerful. Once activated, you can select three enemies nearby and launch areal strikes on them. The problem is that the range is very limited and I usually was only able to fire two out of three shots due to this limitation.

The enemies range from evil bunnies and mushrooms to winged and heavily armed demons and bosses. The enemies have various attack patterns including kamikaze rush attacks to duck and hide. You’ll have to keep your eyes open and have twitch reflexes to dodge the many energy attacks heading your way. Alternatively, you can stand still and analyze the situation while the time is slowed down. 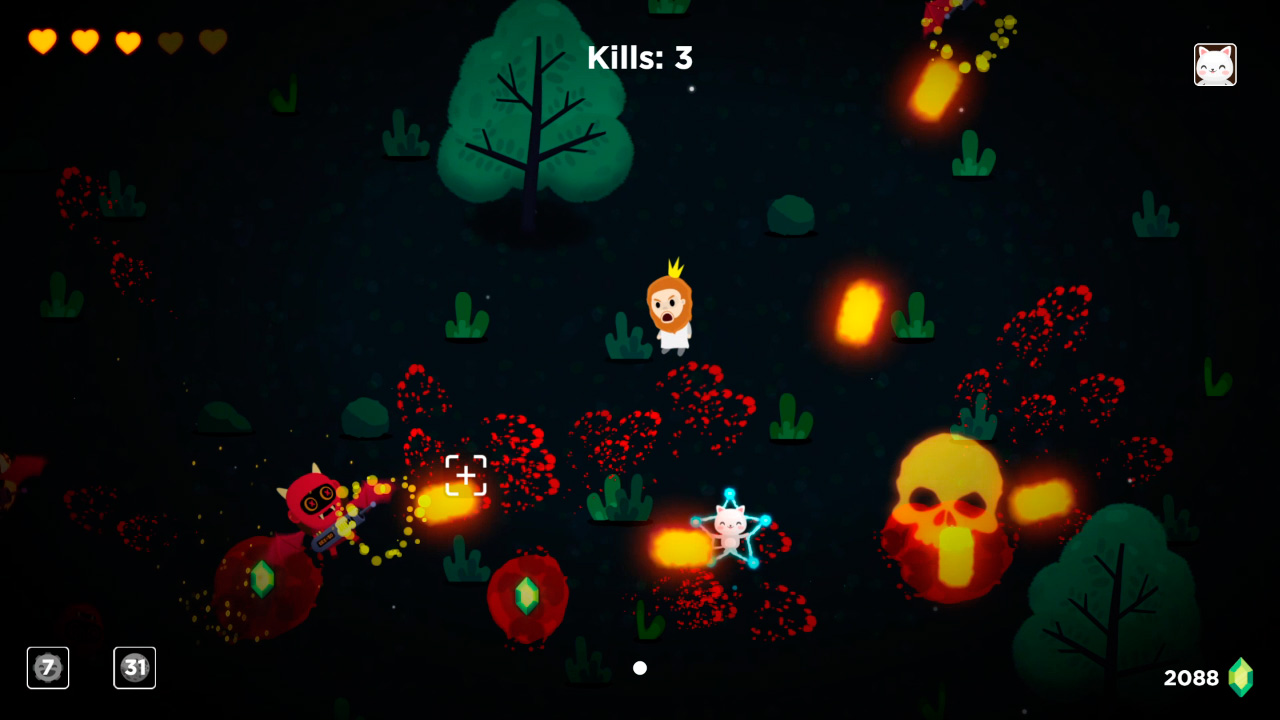 Though the level layout is the same, the deployed defenses are changed up with every respawn. You’ll come across floor spikes, wall cannons, spinning blades, flaming turnstiles, and energy blasters. I like how there is a compass to let you know the general location of the remaining enemies. This is handy in case you accidentally left one alive somewhere.

The dubstep soundtrack consists of twelve songs. It’s available for purchase on Steam for $1.99 or bundled with the game for $6.38. The PC version of the game sells for $5.99 and the PS4/PS5 version is $1 cheaper.

If you enjoy twin-stick shooter games UltraGoodness 2 is worth checking out if you’re looking to be entertained for a couple of hours. Buying both games and soundtracks is 25% off on Steam for $11.96. It’s a fun pick up and play game that doesn’t rely on a deep story to draw you in.